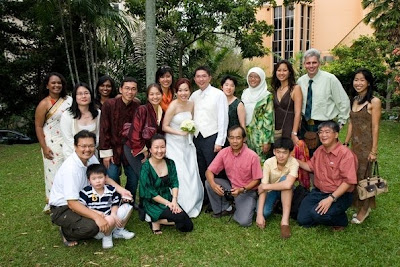 Lillian and Jack had been planning their Green Wedding since July, and a number of us from the MNS Branch Committee had been assisting with various little jobs. I had drafted the content of their mini eco-booklet to be given away as wedding favours, while Pik Wun did the graphic design for it.

After an eternity of planning and organising, the Big Day finally arrived. I met up with Serina in Sg. Buloh at 0800 hours to collect the potted plants from the garden centre. It had rained the night before, and the pots were full of mud. It was quite a messy job loading them into our vehicles.

We couldn't bring the dirty pots into church or give them away as wedding favours the way they are, so Hui-Min, Loretta, Vegan Eugene, Serina and I got to work brushing the soil off the pots and cleaning the pots with a rag by the sink. It was hard work cleaning over a hundred pots and we were still at it when the other guests began arriving at the church.

We finally got all the pots cleaned and arranged beside the pews right before the bride arrived. Then we rushed off to the washrooms to clean ourselves up and change, so we missed watching Lillian come in. There wasn't space to shower in the washrooms, so Hui-Min, Serina and I didn't feel at all comfortable attending the wedding dressed to the nines but sweaty and grimy.

There was a good turnout from the Malaysian Nature Society. It was almost like one of our meetings, with all the committee members present. Gary, Alex and Teck Wyn were there with their families. Rhett wore his kilt and looked great. Li Ann and Ben came in matching outfits. Andy Paul was there chatting up the ladies, as usual. Li Li and Loretta were still manning the guest registration table to make sure the gifts were all accounted for. Each family received a Green Wedding pack comprising a CD of The Story of Stuff, a mini eco-booklet and a CD sleeve explaining the newlyweds' decision to have a Green Wedding.

Serina informed me that if a Muslim were found to be attending a church sermon in our country, the pastor would get arrested. That's news to me, but somehow I wasn't surprised. Anyway, I told her that she's not there for a sermon, and I am sure an exception is made for weddings, because I know a number of Muslim friends who have attended church weddings.

We managed to watch the signing of the marriage register, after which lunch was served in the church garden, so it meant we won't be the only sweaty, scratchy ones. In lieu of a wedding cake, there was a pyramid of cream puffs, which we attacked after the newlyweds did.

I was supposed to be in charge of the 'orphan' potted plants and to deliver the unclaimed plants to the SPCA for sale to raise funds for the animal shelter, but thankfully I didn't have to do it because the plants (birds of paradise, dill and mother-in-law's tongue) were hugely popular and were all adopted by their new caregivers almost immediately. I managed to get a pot of bird-of-paradise for myself.

I know that Lil and Jack put a lot of effort into making their wedding an eco-friendly and socially responsible one and I wish more people would consider the environment the way my friends did when planning their big day. The gang is very happy for Lil and Jack and very proud to be part of the Green Wedding Committee. Congratulations, dear Lil and Jack!

I went back to the parental home in the evening to help Covert Dad and Covert Mum get ready for their trip to visit relations in Macau. Covert Twin and I were to take turns to look after the dogs the following week. I would be caring for them on Sunday, Monday, Tuesday and Wednesday, while Covert Twin would have to come home to feed them on Thursday and Friday.

Woke up at 0500h on Sunday to see the parents off, and went back to bed for a few more hours. Gave Amber a bath and brushed her teeth at 1000h. Walked both dogs and gave them treats. Tidied the parental home and watered the plants before leaving for the SPCA around 1130h.

Collected Shadow and Mini-Me from the Bachelor Officers' Quarters for their neutering appointment. However, Dr. Pushpa's neutering schedule was really full, and she could not slot them in until Thursday. I didn't want to leave my babies with Mazni because they fell very sick there the last time. Linda, thankfully, offered to board them and look after them for me until Thursday, and would not accept any payment from me for it. For friends like Linda, I am eternally grateful.

There was good news at the shelter. We now have another Animal Inspector, Thean. Adoption rates have been quite encouraging lately, too, at an average of 12 - 15 animals each weekend. Also, the little brown tabby that I rescued and brought in for neutering and release last week has been vaccinated and put up for adoption instead. She looks contented and no longer scrawny, and once the vaccination period is over, Dr. Pushpa will spay her and we will all find her a good home, failing which we could always release her where I found her, but right now we are optimistic that she will be able to find a new home.

Together with Rose, I bathed and tick-washed a number of adult dogs, and Frontlined a few puppies that had just been surrendered. As it was a rather chilly day and the sky was overcast, we stopped washing dogs around 1530h and started cleaning the kennels instead.

I soaped, disinfected, scrubbed and rinsed the Hospital, food preparation area, Maternity Kennel, Cattery, Puppy Area and front Reception/Admin area. Reve and I let a few visitors in after official visiting hours anyway, the result of which 2 more kittens were adopted. We are not usually accommodating with visitors, so it depends on how polite the visitors are, and how considerate they are to the needs of the animals, who need to exercise, eliminate waste and socialise with each other after visiting hours.

I finished cleaning the shelter and showered before leaving for Kiri's house. Kiri had asked me over as she had recently acquired a little pug puppy. I went up to their house and parked behind Kiri's car. I was greeted at the door by Kiri holding a tiny puppy against her shoulder. Muffy was tiny and absolutely beautiful. Kiri, Suba and I had tea while watching over the pup. I explained to them the basics of housebreaking and dog training, and asked them to call me if they have any questions. Muffy is adorable and eager to please, and will bring them much joy.

However, I still feel rather ambivalent about the fact that they purchased Muffy from a pet store, which means that there is a 90% chance of her having been bred by a backyard breeder. In addition, Muffy is way too young to be separated from her mother. By creating demand for younger and younger animals, backyard breeders could enrich themselves through irresponsible pet breeding practices such as breeding the bitches too often, breeding unhealthy animals, and cruelly separating young animals from their mothers before they are physically and psychologically ready for it. The fixation with pedigree domestic pets is unlikely to fade away anytime soon, so we need better laws to regulate the breeding of pets. My stand on this is that we should severely curtail the retail sale of pets. This will eliminate impulse buying and force serious pet buyers to go to licensed breeders. Having potential customers come directly to their breeding kennels will then put pressure on breeders to set higher animal care, health, safety and hygiene standards.

I went back to the parental home around 1930h to feed Amber and Little Big Dog and clean the parental home. It's been a doggone busy weekend, as usual.
Posted by ~CovertOperations78~ at 16:20

Excellent site I will be visiting often.