I need to start weeding my Kierkegaarden. I refuse to sit passively and stew in my own existential guilt. I cannot afford to grow increasingly melancholic and bitter as the years pass me by and I wonder if this is what I truly want out of life. My true existence begins with me, and I need to challenge all those things that have provided me with a sense of security all these years. I shall make a leap of faith, and trust my own judgment and instincts that I will land on my feet and respond with moral courage in all that I do henceforth.

Hamsters for adoption at the SPCA for RM50, including the entire Habitrail enclosure/living quarters/play area.

I arrived at the SPCA to find a large Habitrail enclosure containing 3 or 4 distressed-looking hamsters sitting on the floor of the front Admin/Reception area. Oh joy. Yet more victims of impulsive pet buyers who treat animals as retail goods, rather than sentient beings that depend on their human care-providers for life. Other than the hamsters, there were also 2 frightened rabbits being housed in the Cattery. The hamsters and rabbits all look as though they are on the verge of a nervous breakdown or cardiac arrest, due to the incessant barking of dogs and the proximity of cats.

This is another reason I am lobbying for greater restrictions against the retail sale of pets. I have yet to meet a child who doesn’t tire of his or her hamsters or rabbits within a year of having them. What exacerbates this problem is that most parents are only too willing to surrender the animals, who are treated as mere inconveniences rather than companions or family members, to animal shelters, or abandon them in an undergrowth or secondary forest to fend for themselves. Companion animals are to them expendable and replaceable, the latter more often than not with a Game Boy or some other electronic distraction.

We will never be able to consider ourselves a developed nation until we learn to extend our circle of compassion to other specie. If we can’t inculcate a love of living things quickly and effectively enough in society, then the next best thing would be to protect animals by way of legislation and enforcement. We must severely curtail the retail sale of companion animals and pet breeding operations, and create sufficient deterrents in place against allowing pets to breed or to be abused or abandoned. For the time being, I hope some responsible and kindhearted souls will want to adopt the poor hamsters and rabbits.

The SPCA’s adoption rates have remained quite stable at 30%-35%. As at 11th April, the number of animals surrendered stands at 1508, while 521 animals have found homes. We have to work harder just to keep the adoption rates constant, as companion animals often end up casualties of any economic recession.

SPCA dogs hoping for a kindhearted visitor to give them a new home.

I joined Rose at the back of the Shelter to give the dogs baths and rinse them with tick wash. Some of the dogs have minor sores and wounds that I administered Dermapred ointment to. A few stray puppies had been surrendered by people who couldn’t take the puppies in, and I prepared canned food in warm water to entice the puppies to eat. I hope the vets will consider saving these puppies. Fleas and worms are not incurable, so the vets shouldn’t keep using preposterous justifications like that to euthanize animals with minor ailments. For all the hostility the Chairperson of the SPCA displays towards independent pet rescue groups, the rescue groups actually do a far better job of saving animal lives and getting them rehomed, despite having far fewer resources at their disposal.

It began raining heavily later in the afternoon, and so we stopped washing the dogs. I put away the dog-washing kit and started cleaning the Cattery. The cat baskets look as though they haven’t been scrubbed and disinfected in weeks, and there was a big hole in the roof of the Cattery on the right which made rain splash all over the Cattery floor and frighten the cats into a shivering, yowling, indignant mass. 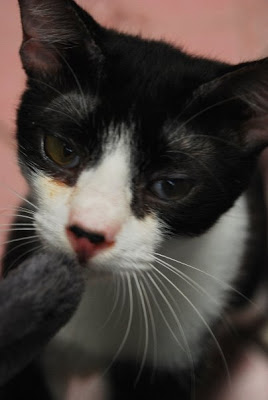 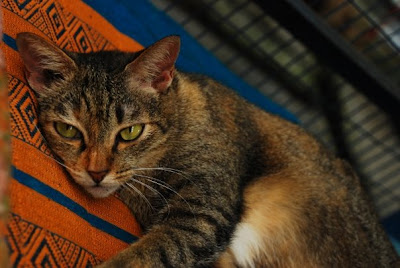 I finished cleaning and disinfecting the Cattery and all the baskets and litter trays, and provided clean and dry bedding for the cats to lie down on. Serina had bought me a Cat-It Scratch-and-Play pad for my birthday Pawed-Luck Paw-ty for which I had requested gifts for shelter animals. Once the Cattery was clean and dry, I set up the Scratch-and-Play in an elevated area for the cats to play with. It didn’t take them long to figure out what the toy was for, and for whom it was intended. I was pleased to see the cats, apprehensive at first, warm up to their game of chasing the ball and scratching the corrugated cardboard pad.

Reve and I started cleaning the Shelter after the last of the visitors had left. We let the dogs from the Maternity Kennels and Ready-for-Adoption kennels out to play so I could scrub and soap the cages and enclosures. I swabbed and disinfected the Front Reception/Admin area and the Office and flushed the floor and drains. I was feeling a bit sickly by then, and informed Reve that I had a brainworm (i.e. one of those headaches that you don’t have an explanation for and wouldn’t go away. Not to be confused with an earworm, which is a catchy song that you can’t get out of your mind).

Reve agreed to help me reline the cages with newspaper and wash the floor of the kennels behind the Office, so I could take a break until I felt better. I went up to the Bungalow to shower and get ready for Lynette’s birthday party.

My brainworm had the better of me when I was driving over to Alicia’s condominium for Lynette’s party, so I pulled over at a cab stand, took an acetomophine tablet from my First Aid Kit, and slept for 15 minutes. I felt a little better after a quick snooze and continued on my way to Lynette’s party.

I was happy to see Lynette and Alicia again and gave the both of them presents – A crystal turtle for Lynette, who collects turtles, and a red Balinese wind twirler for Alicia, who collects red things. Lynette apparently hasn’t been having such a great time at work either, but you wouldn’t have been able to tell just looking at her – she positively glows. We chatted while we waited for the other guests to arrive, and went through Alicia’s impressive collection of musical instruments and books. Alicia shares my obsession with lion dances, and showed me her lion dance scrapbooks. What I didn’t know, however, was that she had performed with a troupe as a child! Alicia regaled me with tales of playing the drums and performing with a lion dance troupe, and made me quite envious of the childhood she had. 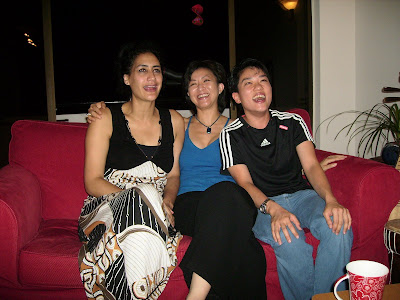 Kiri, Lynette and I sharing a laugh.

The party really came alive when Kiri and her husband finally arrived, and we helped ourselves to the sumptuous spread. You know your hostess has been in the hotel industry too long when you find each dish accompanied by a little card to inform you what it is you’re having. I am sure “Vietnamese Rice Rolls” and “Seafood Pasta” taste better when properly named and labeled.

Being Malaysian, we discussed politics at the dinner table, behaviour which is probably unacceptable in any other civilized society. John expressed surprise when I again declined an alcoholic beverage, this time due to my brainworm. At the rate I am going, I will soon develop a reputation as a teetotaler.

Lynette’s tiramisu birthday cake was duly brought out around 2100h, and Alicia subtly informed us to gather around by playing the birthday song on her piano. We raised the roof with our off-key singing (all except for Alicia, who sings beautifully). The tête-à-tête continued after cake was served, and I found myself in the company of John’s friend, Major, a retired army officer, a most engaging and interesting person. 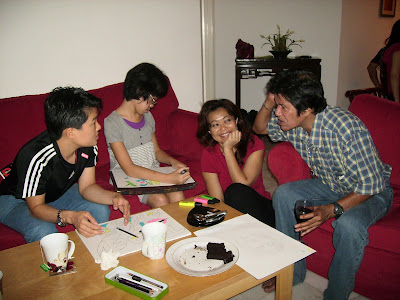 From left to right: Me, Tracy (who is Alicia and Lynette’s little niece), Alicia and Major.

Time flies when you’re having fun, and all the guests were surprised to find that it was already midnight. Alicia informed me that they didn’t need any help cleaning up, so I wasn’t to help. We hugged the birthday girl goodnight and made our way back to our respective cars. It had been a good day for me, and in all the camaraderie and laughter, I discovered that my brainworm had gone away, most probably due to the good company I was in. I am fortunate indeed to have such good friends who can lift me out of any blue funk, and who remind me of all the good there is in the world.

Many Happy Returns, Lynette, and may you always be blessed with good health, happiness and success.

CO 78,
You write so beautifully and your English is superb.I hope everything will work out nicely for you soon.All I can say for now is that you're one remarkable young lady! You have a very kind heart spending your spare time at the animal centre doing all sorts.
I salute and admire your tough but very gentle personality!And you're so full of energy!!

There's no argument about your voluntary work. I've said it before and I'll say it again - you are a Mother Teresa to your animals. In human terms, this is the dichotomy: in the blue corner is the SPCA (also include BB, etc), in the red corner is the rest of human spectrum from general unconcern to general insensitivity to outright cruelty. I'm somewhere between SPCA and general unconcern. In evolutionary and spiritual terms, every adversity and case of animal neglect is merely a way station in our long march to eventual reclaim of our perfect form. That is how I see the myriads of bad things happening daily all over the world since the beginning and no doubt till the end of time.