I spent Saturday back at the parental home giving Amber and Chocky their weekly baths, cleaning the parental home, spring cleaning the master bedroom and the pantry and doing some gardening. Covert Twin had Nicholas Cage’s latest movie, Knowing, stored in his pendrive, so we watched it after dinner. It was a highly disturbing movie made worse by the absence of a happy ending. It was like Nostradamus-meets-Kafka-meets-Sartre-meets-the-X-Files-meets-L. Ron Hubbard.


Covert Mum revealed that she had difficulty sleeping after the movie because it was so depressing. I cheered her up by telling her things I learned out of popular science books such as Bill Bryson’s A Short History of Nearly Everything, such as that:
(i) Those little science lab models of the solar system aren’t really scale models. The Earth isn’t as close to the Sun as we think it is. If the Earth were reduced to the size of a peppercorn, the Sun would be 26 yards away, not centimetres away as it would appear in our textbooks.
(ii) Solar flares can’t hurt you unless you are a spaceship or an astronaut doing interplanetary travel. The Earth is pretty well-protected against solar radiation.
(iii) When X-ray solar flares hit our atmosphere, they are absorbed by the ionosphere. The effect on the human population? There might be interference to radio signals and satellite activity. Power grids might get overloaded. But the Earth is not going to ‘lose’ its atmosphere so easily.
(iv) Our sun is quite unlikely to produce a massive solar flare in the foreseeable future. Perhaps in a few billion years, at the end of its lifespan, the sun might become a red giant and generate enough radiation to fry Planet Earth, but humans won’t be around anymore to witness it by then. Our sun is actually a very stable star, compared to red dwarfs like Proxima Centauri.
(v) Doomsday predictions are a dime a dozen, and because they are so frightening and compelling, movie directors and screenwriters have a field day with them. Besides, there was way too much pseudo-religious symbolism in the movie to make it anywhere near original.

I think it’s disgraceful that a movie could be allowed to leave us feeling so uneasy. It wasn’t even thought-provoking. It just left me feeling cheated. “WTF?!?!” I almost shouted into the TV screen. “You made me sit through 2 hours of disasters (or the special effects thereof) to tell me that all of it was pointless in the end, that nobody survives, and all of this doesn’t have a purpose? Merde!” No wonder I hardly watch television once the football season is over.

Went to the SPCA after breakfast on Sunday. Dr P told me that the staff had already tick-washed all the dogs during the week, so we didn’t have to wash dogs this week. Rose was attending to the visitors at the back kennels, while Reve and Marianne helped out in front. The front area of the shelter was full of cats and kittens that had been surrendered and picked up off the streets. I noticed a scrawny kitten with a bad eye infection which left his eyes almost sealed shut. I knew I could treat the eye infection successfully, as I had done for Felicity last year.

Dr P. asked me ‘not to bother’ providing treatment for the kitten because they ‘would have to clear the cages’ on Monday anyway, which is an almost euphemistic way of saying that they would be killing all the cats and kittens before even giving them a chance of getting adopted. I was dumbstruck by her callousness, even though it wasn’t the first time that I was privy to the indifference of the SPCA vets and staff. Marianne, who never felt the need to ask permission, asked me if I would like to go to the surgery and have her get the medicines to clean up the poor kitten’s eyes with. I assented, and off we went to raid the surgery for sterile solution and Ilium Chloroint for the poor kitten. Marianne quite efficiently cleaned the kitten’s ears, gave him a quarter of a deworming tablet and sprayed his tiny body with Frontline while we were in the surgery.

I was determined that the kitten be given a chance to be vaccinated, adopted and neutered, and so I informed the vets that I would be bringing him home. After all, it was for kittens like this one that I started Project Second Chance last year. Rose came to the front of the shelter for a bit of a powwow and saw the kitten I had picked out. She exclaimed that it was one of a litter that she had rescued from a supermarket dumpster the day before, but was unable to keep due to threats by her neighbours over the number of animals she was keeping in her apartment. Left with no other choice, Rose brought them in to the shelter in the hope that the 4 kittens and their mother would be adopted. One of the kittens had been adopted the same morning.

We immediately got to work making arrangements for me to bring home all 3 remaining kittens, who were all about a month old, and for Rose to have the mother cat vaccinated, spayed, collared and released within the next 2 weeks. This was the best chance we would have of saving the lives of the entire cat family.

Once the kittens were comfortably housed in a cage with food, water and clean bedding, I got to work cleaning all the cat cages and litter trays. I soaped and disinfected the Cattery and all the cat baskets and litter trays. I made sure the cats had clean bedding and fresh food and water. When I first started volunteering at the shelter, I wished with all my heart that I could bring every single unwanted animal home, that I may care for them and see to their needs. That hasn’t changed. Although I have been volunteering for over a decade and have grown used to the realities of running an overcrowded and underfunded animal shelter, I have never stopped wishing that I have the means of bringing all the animals home and providing them with a higher quality of life.

Reve and Sugen fed the dogs at 1645h while I cleaned the Front Reception/Admin & Office area. My new kittens, Rafferty (the male one with the gummy eyes), Millicent (the second biggest one) and Tabitha (the biggest and bossiest kitten) slumbered peacefully in their cage under a desk in the office.

Next, I swabbed and cleaned the Hospital, Maternity Kennels and kennels behind the office with soap and disinfectant. The dogs had been let out to play in the shelter compound after the visitors had left, so I collected all the food bowls, handed them to Sugen for washing, and cleaned out all the cages.

We finished cleaning the shelter by 1900h. Marianne wanted to go up to the Bungalow to feed the Pulau Ketam dogs with Sugen. I showered and changed while waiting for her to finish her work and then I loaded the kittens into the Battletank. I gave Marianne a ride home so she would not have to call for a cab. All through the journey, Tabitha kept escaping from the cage and climbing all over the inside of the car. It was a very frustrating drive, especially when she decided to soil the front passenger rubber mat, and when she went under my clutch pedal. I gritted my teeth and focused on my driving and managed to get myself and the kittens home unscathed.

Once home, I got a large cage ready and transferred the kittens into it. I checked the smaller cage borrowed from the SPCA to see how Tabitha managed to escape, and found the cage bars broken in 2 places. I repaired the cage, cleaned the car mat, cleaned up after the Rowdies (my senior cats) and tidied the BOQ. The Rowdies were very displeased with the surprising arrival of the kittens, and showed their disapproval at every opportunity. One of them (I think it was Shadow) even resorted to using the faecal defence system. I spent all night washing and disinfecting bedsheets, the beanbag chair and doormats and cleaning the house until morning. I must say I have never been gladder about not having a fulltime job to wake up to on Monday morning. It’s going to be a loooong week, for sure. 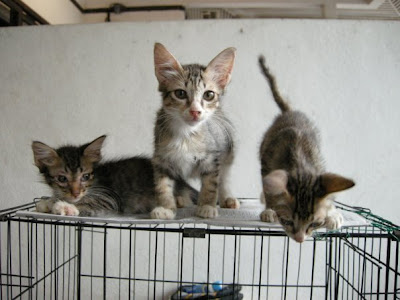 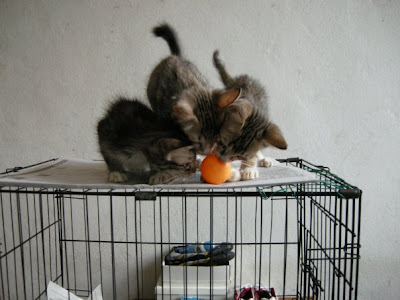 From left – right: Rafferty, Tabitha and Millicent
Posted by ~CovertOperations78~ at 13:44

I wonder if people get callous after working with too many sad cases or if paid charity work attracts the callous. To put down unwanted animals can be necessary but to leave them to suffer with sore eyes etc for a couple of days first is just terrible. glad you are there. Call me about those kittens next week, right?

CO78,
From the bottom of my heart, thank you for rescuing those kittens. Here's a lick on the face, head on the bosom and a big big cuddles from us. Brad says those kittens look just like him. He was a stray too. XOXO...mmmmwwaaahhhh....

I agree with Katztales - it may be necessary to put down unwanted animals, but to leave them to suffer until that is done? I don't get that at all!

If I wasn't so allergic to them, I'd take them. Chuan loves cats, and when we move to PD, we'll have one - the house-and-garden is big enough for both me and a cat I can love but not touch!

I didn't read anything about Bill Bryson's book here: cos I have the book, and I didn't want you to be a spoiler unknowingly! Hahaha.

Hugs to you for saving those kitties!

Thank you for your support and your love for my kittens, everyone. You are all sending lots of good vibes their way!

Ellen, Angelina, Brad and Pat, I may have to bring the kitties to the vet later this afternoon. Millicent gave a little sneeze. I am not taking any chances. One thing to be grateful for is that the kittens are very active, have huge appetites (hope it's them and not the worms! They've been dewormed once so far) and have learned to use the litter tray. Please pray that it's not cat flu.