‘Science of Survival’ Exhibition and other news

I have read many good things in environmental education forums on The Science of Survival, an award-winning travelling exhibition on scientific and technological solutions to environmental problems, and so when the exhibition was held at our National Science Centre, I persuaded my like-minded friends to visit, in the hope that we may get more ideas for our future nature and environmental outreach activities.

Our respective social, volunteer and work commitments made it impossible for us to settle on a date to visit until last Saturday, 8th August, and since many of us had prior weekend engagements, I decided it would be best for us to visit in the morning and be done by noon. We met up at the National Science Centre at 0900h, not expecting to find the whole place crawling with ankle-biters in surgical masks with similarly bemasked schoolteachers. We had expected the young’uns to stay home due to the Influenza A (H1N1) outbreak. As with most other places of interest in Malaysia, the National Science Centre was rather rundown and many exhibits were missing vital pieces or were not functioning.

The The Science of Survival exhibition, however, made up for the mediocrity of the Science Centre. Although it was a rather small exhibition, its interactive nature and the information-packed displays and games made it worth the rather steep ticket prices. 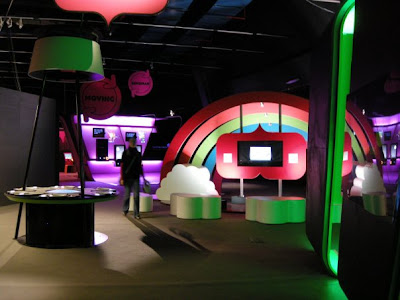 The exhibition hall looks like something out of an 80’s video game, doesn’t it? 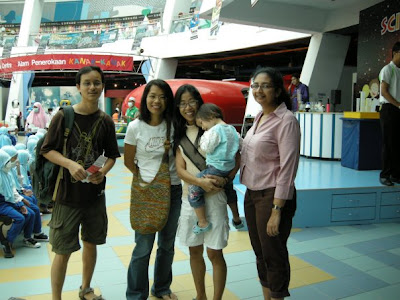 Eugene, Mohala, Cindy (Cerys in arms) and Lavanya at the concourse of the National Science Centre. 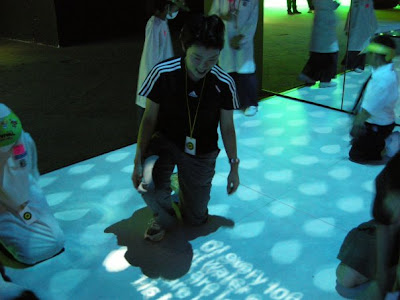 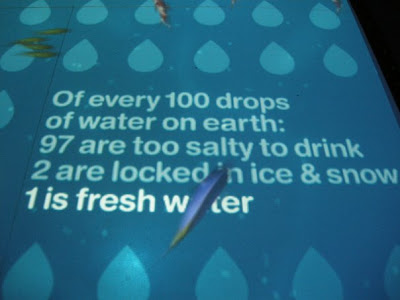 Me checking out the virtual pool which bears the message:
"Of every 100 drops of water on earth
97 are too salty to drink
2 are locked in ice and snow
1 is fresh water" 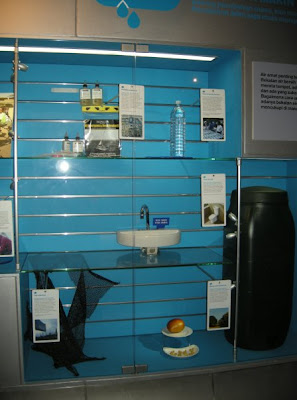 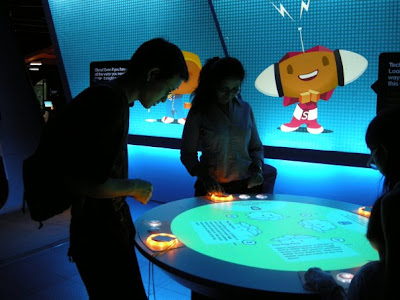 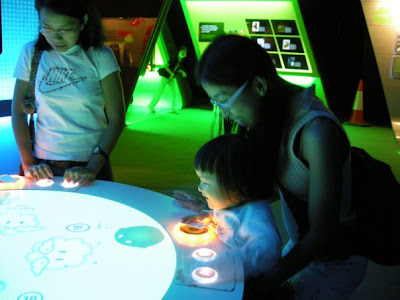 Lavanya, Eugene, Mohala, Cindy and Cerys challenging each other in the water conservation video game. 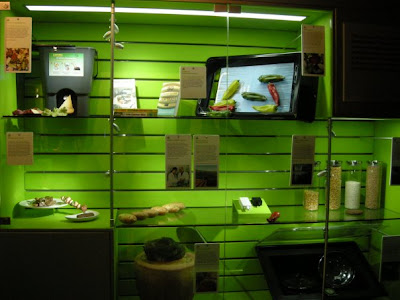 Food security and sustainability: Will there be enough food for everyone to meet the Millennium Development Goals? Can food be sustainably and safely produced, transported, prepared and preserved? The displays featured, among others, an Egloo portable chicken coop, a solar cooker unit, a pot-in-a-pot electricity-free cooler, fungus-based lab-cultured meat substitute and a kitchen composter. 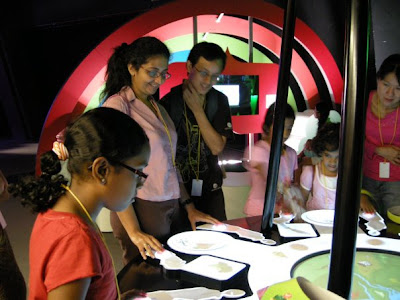 Playing the food distribution game. As you can see, Vegan Eugene and Lavanya had loaded their plates only with vegan food, those crazy grass-eating, treehugging, hippies! 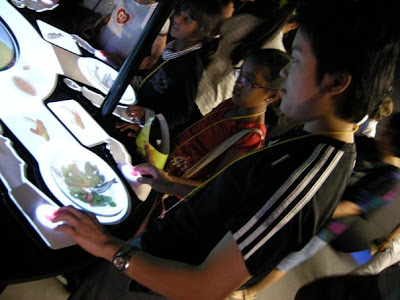 My turn! I have... broccoli, bananas and pizza. Whose idea is it to leave desserts out of my menu?!?! 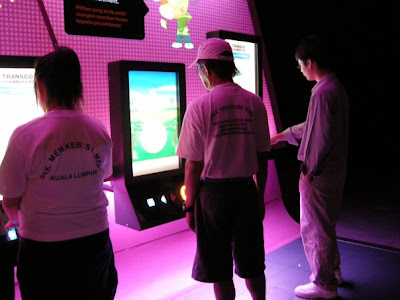 Designing our own vehicles for Future City. 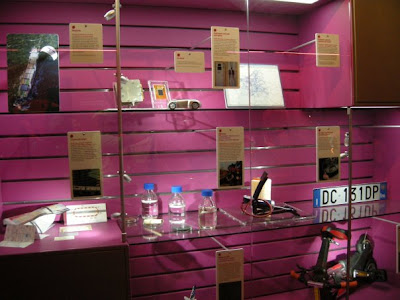 Fuel-saving innovations and alternatives to fossil fuels: A kite-powered ship which can reduce diesel consumption by as much as 20%, the Airbus A380, and hydrogen fuel cells, among others. Even if you are one of those who believe that climate change is not caused by human activity, when is it ever a bad idea to be able to run a vehicle on half the fuel it normally consumes? 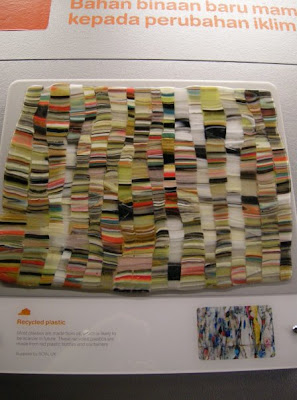 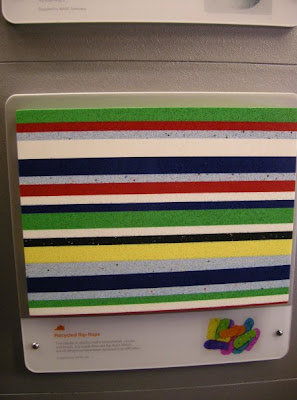 Alternative building materials and energy-saving fittings. I loved the tiles and bricks made of once-used plastic resin, aluminium and plastic/rubber foam. Now isn’t that a good way of putting to use plastic and other waste that would otherwise just take up landfill space? 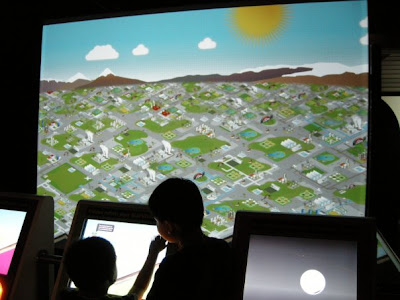 The little town I created was entered into the network so it could join all the other development projects in Future City, and we could see the environmental impact of the kind of lifestyle we chose to have.

My buddies chose to stay on a little longer to look at the other exhibits in the National Science Centre. I bade them goodbye and left the Science Centre by 1230h, as I was anxious to take the Whisketeers to the SPCA for vaccination, and didn’t want to leave it too late.

Although the games were much too easy for my gang, I did feel that it was money well-spent as the exhibition was informative as well as engaging, and ultimately, forward-looking. It wasn’t another all-doom-and-gloom exhibition about deforestation and global warming, although those are also important components of environmental consciousness. Instead, it was one that offers solutions and alternatives, and celebrates creativity and innovation. It showed us that humans can meet our own needs without having to destroy our natural environment, displace indigenous communities or deplete our resources. It showed us how everything we purchase, consume and utilise, from biofuels and organic produce to SUVs and ocean liners, have an environmental cost. And ultimately, it showed us that humans can be agents of positive change, and that the choice is in our hands.

I went back to the BOQ, cleaned up after the kitties and put Tabitha, Mitchell and Rafferty in the large carrier. So off we went to the SPCA for the kittens’ first vaccination. The kitties were rambunctious, as usual, but thankfully did not foul up the carrier. We arrived at the SPCA safely and Dr. Pushpa was very helpful in getting them vaccinated immediately so I could put them in a cage with food and water to rest until I was ready to take them home.

Cindy came by on her bike to discuss some of her concerns about her coordinatorship of Green Living. I thought her ideas very brave and ambitious but assured her of my support. Thean and Rose joined us for tea at the warong and I left after I finished my tea, as I wanted to get to work at the shelter.

Reve was busy with the potential adopters visiting the kennels, while Marianne was similarly occupied feeding the kittens and cats out in the Front Office/Admin/Reception area. I got to work cleaning and disinfecting the Cattery and cages.

Halfway through cleaning the Kennels, after the vets and staff had gone home, I spotted what I thought was a dead black kitten stuck in the space between the beam and zinc roof of the Cattery. I shouted for Reve to come help me remove the poor kitten, when the kitten suddenly gave a little squirm. It was alive, but weak! There was no way the kitten could extricate herself from that tight space. I tried stacking up the chairs and climbing up, but had a nasty fall. Then I thought of climbing up the shelter roof from the outside, since that particular part of the shelter was below street level. I ran out, briefed Muniandy (who was already off duty and was having a cigarette outside) and Reve, Muniandy and I got to work testing the roof (so we don’t fall through the broken bits and hurt the animals that we might fall on). Reve and I tried to lean far enough over the edge to catch the kitten but it was far tougher than it looked and I developed vertigo after my 3rd attempt. Muniandy approached the tiny kitten carefully so as not to spook her and cupped her swiftly in his hands. She was safe! Muniandy was a hero!

Reve put the tiny kitten in a cage with 2 other kittens that had just arrived and gave her a dose of deworming medicine. We will try to find her a home, failing which, Project Second Chance will take over and vaccinate, neuter and rehome her out of my own resources.

(Update as at date of blogpost: Reve managed to get find Ebony, the black kitten, a new home!)

I offered to buy Muniandy dinner but he was quite bashful, so I didn’t push it. I resumed cleaning the shelter and soaped and disinfected the floor and all the enclosures and fixtures while Reve hosed it off. The shelter looked and smelled a darn sight better when we were through.

I cleaned myself up, put the Whisketeers back in their carrier, and barrelled on home to the BOQ. After ensuring that all the kitties had food, water, litter and clean bedding, I hugged them goodbye and went back to the parental home to spend Sunday with the parents, Amber and Chocky. Sunday was spent cleaning the parental home, dismantling and cleaning the cookerhood and stove, giving Amber a bath, walking the dogs, and accompanying Covert Twin and his girlfriend to the official launch of the housing area in which they had bought a house.

It’s been another good weekend.

Animal Welfare Update: Remember the Letter to the Editor that Pat, Larnee, Charmaine, Christine and I submitted on the use of bullhooks on the elephants at the Kuala Gandah Elephant Sanctuary? Well, the Sec-Gen of the Ministry of Natural Resources and the Environment has responded, and they reported that they have done away with the use of bullhooks at the Centre! Read all about it here: No More Bullhooks. It sounds too good to be true, so the public and animal welfare groups will have to be vigilant in monitoring them and providing checks and balances. The official statement from the Ministry was, of course, highly appreciated. Hurray for a better quality of life for the elephants!

Glad a splendid exhibition like this is in town. Shall make my way there too; really a stone's throw away from us.
Have heard uncomplimentary comments on the Science Centre. For one, the 'wired' animals in the open look unkempt and whatever plants that are to cover the forms have done sweet nothing for ages. That's one of the stories of unfinished work!

Kudos to you and your friends for highlighting the bullhooks issue. Hurray!

Thanks, Keats! Yes, everyone should visit the exhibition even though it might not seem worth RM16 (RM12 for the exhibition, RM4 entrance into National Science Centre -- daylight robbery!). Seeing those innovations on display is really an inspiring, empowering and educational experience for all of us. They've just extended the exhibition until 6th Sept due to the demand.

Hurray for the elephants, too! Let's make sure they keep their word!

How on earth did that kitten get up there? Glad you got him/her out safely. Haven't been to the science centre yet.

Have you recovered from the fall off the stacked chairs??!

And, I'm glad about the news about the bullhook being banned. It's sad the guy referred to the letter by the guy who cetak-rompak-ed your letter, but the outcome is what mattered: that the bullhook would be used no more. It was about the elephants, no? So, yay!

Thanks for your visit, Ellen! I think the kitten got up there from the roof, part of which was almost the same level as the street outside. Poor thing! I hope she finds a home.

Hello there, Pat! Thanks for your concern. I am very accident-prone. I once fell cos my right foot tripped over my left foot. That's what I mean when I say that I do my own stunts. Crash-bang-wallop-yikes-OUCH! As for the elephant letter, it was good that the other guy wrote in to support our stand too. It creates the effect that our argument enjoys popular support.