Sittin' On The Dock of the Bay 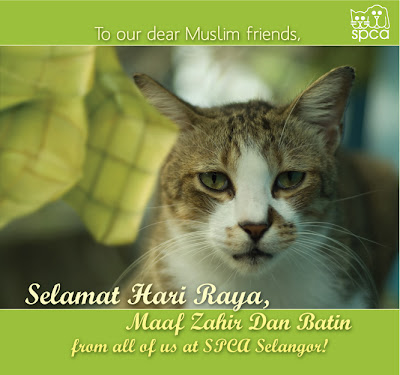 This must be a rare week for reconnecting with old friends. When I was out taking Amber for a drive around the neighbourhood, I met my old school pal, Parames, who I haven't seen for years, and her baby boy, Manesh, on an evening stroll near her old home. I stopped the car and got out to greet and hug my old friend. Our brothers were best friends and had remained so, but due to the fact that Parames is younger than I am and had attended a different school, we drifted apart in our teenage years and only met up during the festive holidays. The last time I saw her was on Deepavali day in 1995. It was good to catch up again and exchange phone numbers and promises to add each other as friends on Facebook.

I felt so gratified that we had gotten back in touch. I really treasured her friendship and was sorry that we had been too busy to keep the friendship active and alive. My Saturday was much enriched for having made contact with yet another old friend.

I had agreed to participate in the Kota Damansara Community Forest Lake Cleanup on Sunday morning, organised by the Eco Warriors Facebook group. However, Amber's skin sensitivities had flared up and she scratched herself almost to bits on Saturday night.
How could I go out cleaning lakes when Amber was in so much pain and discomfort? I took her to the vet whose services my parents rely on, Dr Peter, as soon as the clinic was open on Sunday morning. After the consultation, I took Amber back to the parental home so that I could administer medicine to her.

I left the parental home for the SPCA around noon, once I was confident that Amber is going to be okay. It was a busy day at the SPCA, and I was pleased to see a few animals adopted.

Tabitha was still there, and I was prepared to bring her home if she were not adopted by evening, but the vets informed me that they were fairly certain that she would be adopted soon, as she is a friendly and affectionate kitten and there has been many inquiries about her. It's just that many people didn't want to adopt before their festive vacation as they would then have to make boarding arrangements. It made practical and economic sense for them to adopt after the festive holidays, and the vets believe that Tabitha would be adopted by then. Tabitha is a well-adjusted and active kitten, and I trust she will find a good home soon.

There was another kitten at the SPCA, a grey quasi-Persian with unruly fluffy hair and a plaintive meow. He was a one-month-old stray that someone found wandering near the stalls, crying in pain. The tiny tomcat had wandered too close to a hot motorcycle exhaust pipe while in search of food and had burned his left eye. Not being aware of any alternatives, the passerby brought him to the SPCA.

I informed the vets that I could foster the kitten until he is strong and healthy enough to be rehomed. I know that Ilium Chloroint could be used safely on eye injuries as long as there is no ulceration (The steroid in Ilium products could delay the healing process in ulcers).

I prepared a carrier and informed the SPCA staff that I would be taking the kitten for a few weeks. I decided to name him "Otis", as in Otis Redding. (No prizes for guessing the inspiration for the title of this blogpost).

A gentle, reluctant drizzle fell the entire afternoon at the SPCA, and so Rose and I could not wash and groom the shelter dogs. I got to work cleaning the shelter instead. Reve assisted with the visitors and potential adopters, while I cleaned and disinfected the Cattery, Maternity Kennels, Puppy Kennels, Hospital and the Front Office/Admin/Reception area with biodegradable soap powder and Dettol.

Reve and I finished cleaning the shelter and led the dogs back into their enclosures at 1930h. I had a shower, put Otis in the cat carrier and drove him home to the BOQ.

(Update as at Monday, 14th September 2009: Otis' eye is healing nicely and he is the most delightful kitten ever. He never misses the litter tray, doesn't soil the pillowcase I've given him to sleep on, eats heartily, plays with the jingle ball and racing car I've given him and sleeps once he is full-bellied and tuckered out. I can't think of anyone not wanting to bring him home)

I know Otis' path crossed with mine for a reason, and I won't let him down. 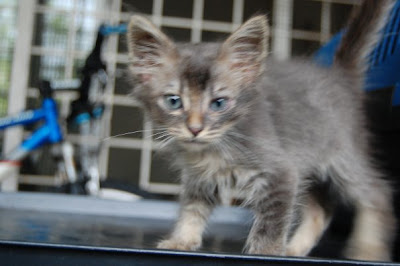 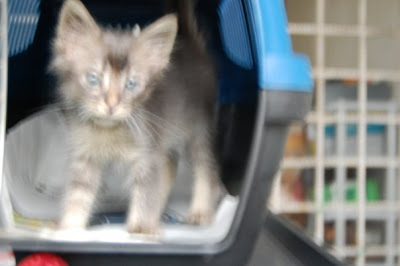 Otis meowing plaintively to be picked up and cuddled. 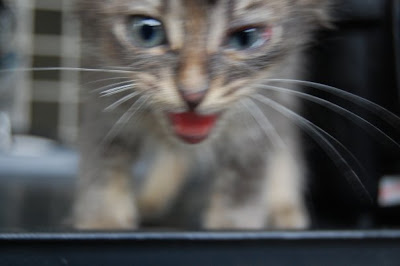 A close-up of Otis: You can see that the injury to his eye is healing nicely and his eyesight is intact. 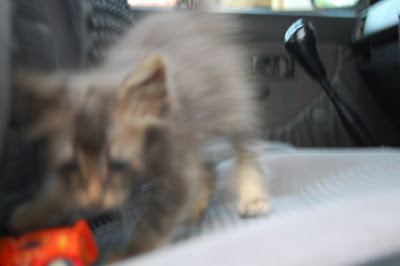 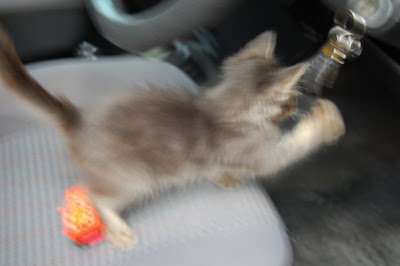 Otis having a ball in the Battletank. 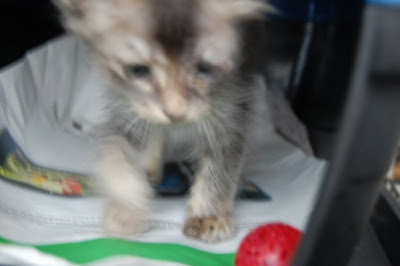 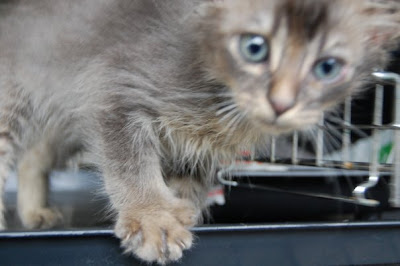 The vulnerable look is part of his appeal. Okay, I am a lousy photographer, so bite me!

Monday, 14th September 2009: The Battletank is back from her makeover!

Hey, did you happen to see the most beautiful car in the world?
And if you did, she happens to be mine... 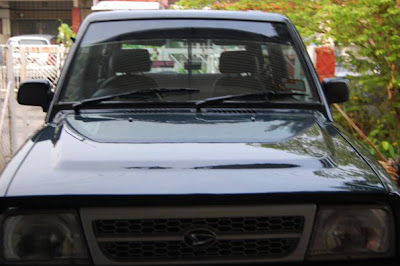 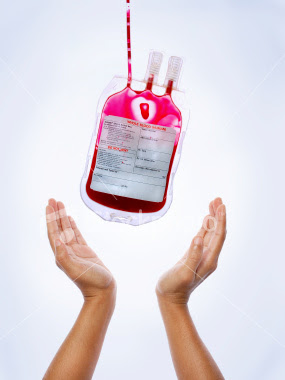 As I was keeping on top of my work and did not have to rush my lunch hour on Tuesday, I decided to give blood at the National Blood Bank at noon. I had originally wanted to do it on Covert Dad's birthday (20th August), but as it was then not yet three months since my last donation, I was unable to donate. I decided to defer it to September, and recite my Theravada transference of merit puja for Covert Dad after the deed.

It went, as usual, without a hitch. The blood bank is only an 8-minute drive away from my office. My haemoglobin count was 14.1, and I managed to fill up a 350ml bag within 2.58 minutes, which still did not surpass my personal best of 2.54 minutes.

The nurses gave me sandwiches, coffee, biscuits (the cream-filled ones which ruin my teeth), iron and folic acid pills and a souvenir mug as a token of appreciation, as it was my 29th whole blood donation.

Once I was in the Battletank, I recited the transference of merit puja and informed Covert Dad of it. It seemed a bit odd as it has been almost a month since his birthday.

At the rate I am going, I am convinced that I will be reborn as a cockroach or a slug. It seems to me that each time I consciously do anything that is of use and of good to another (or others), I recite the transference of merit prayers in favour of someone else - The living: Covert Dad and Covert Mum, or the departed: Granddad, Murphy, Pepsi, Walden, Chip, Shasta, the orange cat at the SPCA and the dogs that perished on Pulau Ketam.

I think I have depleted my supply of good karma so much that I really shouldn't expect to be anything more than a small, cold-blooded invertebrate of some sort in my next life. Oh well. I just hope that I don't get reborn as an axolotl, because they give me the creeps.

Aiyoh, if you're reborn as a cockroach or a slug, what in heck will I be reborn as: a bacterium?!!

But, sayang, I believe it is in giving that we receive. And when you offer your puja for the souls of others, surely some of it is reflected right back at you?

I dunno lah, but if there's a god in heaven, s/he is smiling down on you, for sure. And wondering how s/he can teach the rest of us to be a little bit more like you!

Hi Pat! I am dead lazy when it comes to studying my religious texts, but yes, the person who offers the merit gains good karma in return too, but I am sure it isn't 100%-for-100% otherwise it doesn't make sense to transfer the merit. It would be like, "Nah, here's RM10 for you, and I expect RM10 back too". Where got sincere like that? ;o)

Anyhowzers, tentative date for our ice cream session is Oct 2! Larnee and I have too much in common, LOL!

Your heart is always overflowing with goodness and kind deeds. God Bless you!
Reborn?? - I just want to be left alone!!

Dear Keats, I try to be a good person, but it's hard! So many temptations. Red lights to beat, illegal U-turns to make, other drivers to swear at, etc. Ha ha about wanting to be left alone! Some believe in reincarnation and some don't. But I do know that my only motivation for doing what I do is because I am able to. Being able to share and to help is a privilege and a pleasure. There are so many people in the world who can't help themselves, let alone others.

CO78,
My Mama says your new whisketeer looks really adorable! And you named him Otis! We're all praying that Tabitha will go to a good home soon. And that you'll be reborn as a cat. meow!

Thanks, Angelina and Brad! Otis is such a handsome little charmer. His eye is perfectly fine now, you can't even see any signs of previous injury. I can't imagine who wouldn't want him. I hope I get reborn as a loyal pet cat. I want to be a calico. I love calicos. I hope I will be as beautiful as Chloe or Mini-Me.

Tabitha was adopted yesterday, Wed 24 Sept, by "a very nice lady who loves cats". Apparently Chelvy at the SPCA told me that Tabitha just climbed right up to the lady's shoulder and cuddled there, and so the lady knew the kitten was for her.

I am so glad that all three Whisketeers have found good homes.