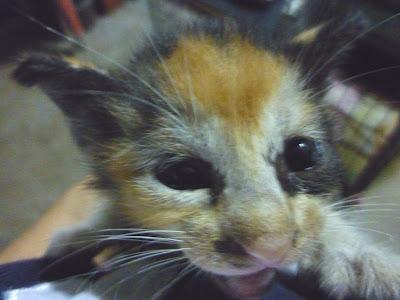 Jewel is a very tiny kitten who has made a very big impact in my life. I must admit that I didn't, and still don't, like the circumstances in which I acquired her.

Someone who I no longer consider a friend (due to her parasitic tendencies and penchant for pushing responsibility to others) found a tiny kitten while driving home on Monday night. She (hereafter to be referred to as 'The Nuisance') brought the kitten to me without trying to do anything for the kitten first, on the basis that she is busy with work (What?!?! And the rest of us are employed to drink tea?!?!) and that she has another cat who might not like the presence of a new cat (so what?!? I have 6 cats and all of them are hostile to new cats for at least a week). I was in excruciating pain after dental surgery and practically broke after paying for dental treatment, car repairs and the vet bills previously incurred by the Whisketeers. But of course, to The Nuisance, her problems are the biggest in the world, and no one else has to work or will be inconvenienced by a kitten except for her. Only her problems matter.

I railed and ranted at The Nuisance and made her go out and purchase kitten food, but what I didn't tell her is that I had already fallen in love with the tiny calico kitten. After The Nuisance left, I tried giving the kitten, who I have named Jewel because she is such a precious little thing, some wet food mashed with warm water, but Jewel, who I estimated to be between 1 and 2 weeks old, cried constantly and would not eat. 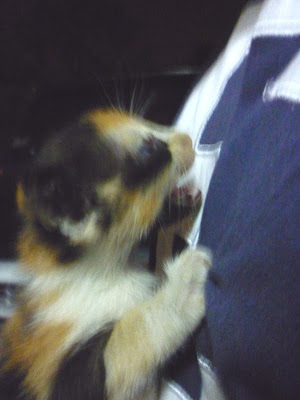 Jewel crying for her mama as I held her.

The following day, I purchased Kitten Milk Replacer and a JustBorn nursing bottle and tried to bottle-feed Jewel. She continued crying herself into starvation and would not feed. I tried using a medicine dropper to feed her but it was a slow and messy process, and I was really fearful that she might develop aspiration pneumonia from inhaling the fluid.

My last resort was to find someone with a nursing mother cat. I called up the SPCA but Reve could not find a nursing mother cat for me. My friend Azura has a mother cat who has just finished nursing her kittens and was supposed to be spayed in a few weeks (I had obtained the spaying/neutering vouchers for her during World Animal Day). Would Mama Cat be willing to nurse Jewel? It was worth a try.

I brought Jewel over to Mama Cat. Jewel was by then quite weak and unable to stand. Azura showed me how to rub Jewel against Mama Cat's kittens (to be vaccinated, put up for adoption and scheduled for neutering soon) so that she would have their scent.

We then put Jewel against Mama Cat's abdomen. Jewel made a frantic search for Mama Cat's teats. Soon she was suckling contentedly, and both Jewel and Mama Cat began purring.

My gratitude towards Mama Cat knows no bounds. Mama Cat is a hero for saving Jewel's life! Azura is very generous and understanding about it and has offered to foster Jewel until she is able to eat from a bowl, after which we will make plans to find Jewel a new home.

Jewel may be no bigger than my palm but she occupies a very large part of my heart right now. 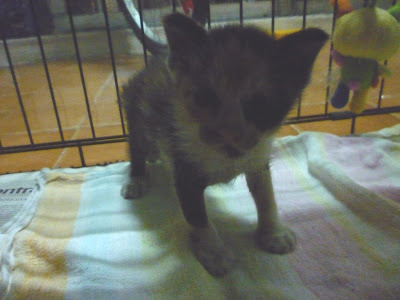 If you need help caring for Jewel - like buying her stuff, let me know. I can't hold her, or keep her in my home for you - because I am so very allergic to cats - but I can help in any other way you need. All you'd have to do is ask, and I'll be there.

Jewel is a beautiful angel.

Thank you for your kind offer, dear Pat! I'm making The Nuisance pay, the lazy, good for nothing so-and-so!

Me go for open house lunch now. Please visit my contest blog at:
http://savoirvivrekl.blogspot.com/ and vote for me pls pls!

Thank you and much love!

Fantastic story! Hope Jewel makes it through and becomes a big, strong kitty.

Thanks, Ellen! I hope so too! She is learning social skills from Mama Cats and the other kittens at the moment, which is great. We're trying to find homes for Mama's other kittens, though. :o(

Thank you, Sydney Cats! I like the goochee goochee part. I do it with my Rowdies! They roll over and over like eggs when tickled. I love being a Cat Mum.