I have been back to volunteer at the SPCA shelter 3 times since Reve’s demise, and nothing was the same. Nothing will ever be the same again. I thought that attending her funeral might bring me a sense of peace and closure, but it just filled me with more rage and frustration. 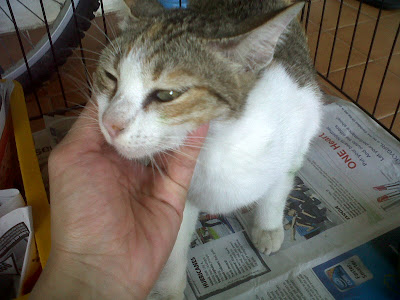 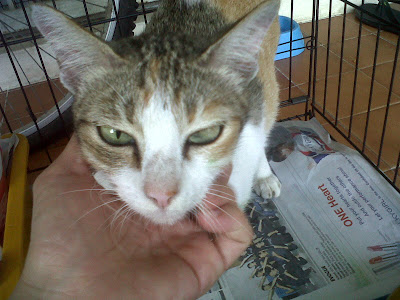 This is my latest fosteree, Marie, who was surrendered to the SPCA on 3.7.2010, the day we found out about Reve’s murder. Marie was obviously named after Reve. I arranged with the kind gentleman who brought Marie in to have Marie spayed and rehabilitated and released at a friend's home in a safe neighbourhood, where Marie would receive food and care daily.

I have been remiss in catching up with blogs and e-mails this week as I have been working until midnight to clear some of my work before That Special Someone’s arrival. I picked him up at the airport on 15.7.2010. I am immensely grateful he had come. His arrival took away a great deal of the pain of dealing with Reve’s untimely death.

Since his arrival on Thursday, we have spent a day at the SPCA with our mutual friends and the shelter animals. We have brought Marie back to her appointed caregiver. 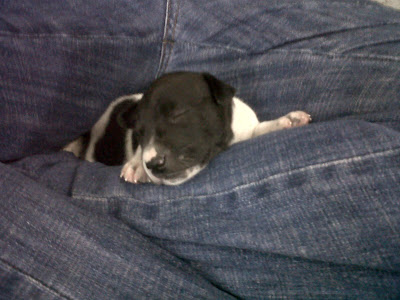 Tapir the puppy asleep in That Special Someone’s lap.

I have pretty much avoided the usual tourist traps and brought That Special Someone to places I normally frequent instead. We went to Brickfields and ate at my usual chappati place. We went to the Buddhist Maha Vihara and ended up playing with the temple dog. We went grocery shopping near my bachelor pad. I showed him Chow Kit and Lorong Haji Taib, the seedier parts of this city that I love, where I used to carry out outreach work as a Legal Aid Centre & Pink Triangle volunteer.

We had a daytrip to Kuala Selangor, where we raced each other up and down the hills and half fell to our deaths on the rocks. We climbed up and down cannons and ancient forts. We poked fun at museum exhibits. We played with the monkeys and tried to bring a monkey home with us. We trekked through the Kuala Selangor Nature Park and climbed up a Bird Hide from which we spotted eagles, egrets, herons, a monitor lizard and more macaques. We rode the tram through the town and up the hill. We had ice cream at the cafe. We drove down to Kampung Kuantan and rode the sampans to see the fireflies. It has been a magical 4 days so far. 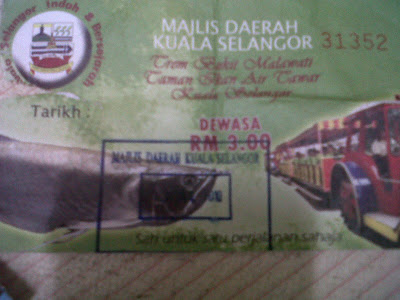 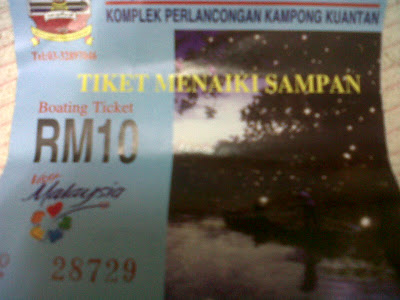 Tomorrow we leave for our long-awaited trip to Langkawi, where we hope to do everything from go-karting to parasailing. We’d like to go to Bonton Resort to help out at the animal sanctuary. I hope the weather holds up so we can bathe the dogs as well as spend the rest of our time on the island swimming, surfing, exploring and looking for buried pirate’s treasure (my idea, not his).

We have tickets to ride. And we intend to make the most of it. And so I bid you adieu for all of next week.
Posted by ~CovertOperations78~ at 17:36

I know you're having a swell time. Did the hours stretch to 25 or more?? And that long- awaited holiday has finally come! Enjoy yourselves and come back refreshed:)

Ee Lynn,
In such time of grief I am glad you manage to find some joy. Enjoy your much deserved vacation in Langkawi with that special someone who seems to enjoy the same thing as you do ie caring for animals.

Happy Holidays! some well-deserved time to spend taking care of your spirit. Glad you have TSS to share your vacation.

Thank you dear Keats, Abang Zawi and Joanne. We hope to have a safe but adventure-filled and memorable holiday.

Its great that you have the One by your side at this difficult time. Enjoy your holiday! Have a fabulous time!

Seems like you have found your treasure already...and you didn't even have to dig it up, just meet him at the airport :)

Have a wonderful vacation.

A magical read, this post of your magical time with TSS (borrowed from that so-very-the-clever kitty!).

*Hugs* for the both of you!

Thank you all for your kind words! We just came back from Langkawi last night and are exhausted! We had an enchanting time. Louis, you are absolutely right! I have found my treasure and I am not letting him go. Our holiday was better and more magical than anything I had ever expected. I have finally met my match in activity and energy levels.

Sounds like a match made in heaven. The happiness and love is coming through loud and clear through your blog. Enjoy each other!

Thanks, Angie! Can you hear the wedding bells yet? It's faint and it's a bit distant but it's there! ;o)