A Lazy Saturday at the Bentong Farm Sanctuary

I had been so preoccupied with my commitments at work and with SPCA Selangor, the Malaysian Nature Society, and PT Foundation that I have been quite remiss in my responsibilities to Bentong Farm Sanctuary since our last visit there on August 31.

I finally had the good sense to call Shahrul sometime in October to determine if they needed any help in engaging veterinary services. Shahrul informed me that thanks to the goodwill of Noah's Ark Natural Animal Sanctuary (NANAS), a team would be going to the Sanctuary on November 27 to carry out spaying and neutering of the cats and dogs at the Sanctuary. However, the Sanctuary was experiencing a shortage of cat and dog food. I apologised for not having visited in 2 months and informed her that I would be bringing friends and donations of pet food and supplies over to the Sanctuary on November 20.

And so on the morning of November 20, I gathered a troop of 7 friends (to be met later at the Sanctuary by a troop of another 7-8 friends) and we made our merry way to Bentong to spend time with Shahrul, Jorg and the animals. 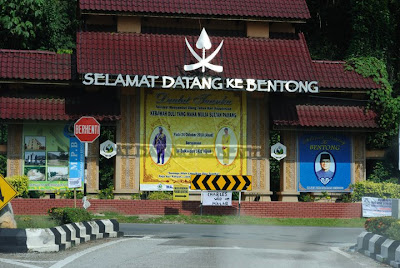 It's good to be welcomed back to this quaint little town and the animal sanctuary that now has such an important place in my life. 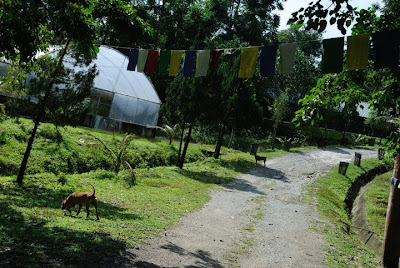 We were escorted all the way in to the main building in Sanctuary by the dogs, who must have known that we were bringing them lots of food and goodies!

We unloaded hundreds of kilogrammes of pet food, human food (rice, canned food and other dry goods), pet supplies and veterinary supplements, much to Shahrul and Jorg's delight. The generosity of our friends knows no bounds.

At my prompting, Shahrul suggested going to a lesser-known ice cream parlour in town before the ice-cream gets sold out by noon, and so off we trooped in convoy after unloading the food and supplies and greeting the animals. We were so glad that Shahrul suggested this place, Kedai Ice Cream in Jalan Loke Yew, Bentong Town, because the ice cream, being partially hand-cranked, was delicious, and so very cheap! Even my blogging pal Keats and her fellow Sunshine Lady May, being good cooks and therefore connoisseurs of fine foods, agreed that the rich, dense, old-fashioned ice cream at this shop was lovely. 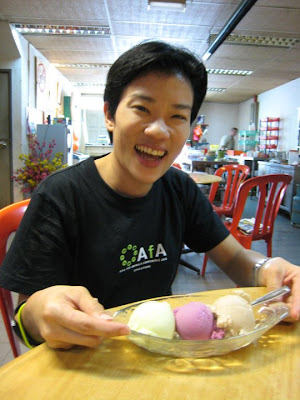 I was a picture of happiness when I received my scoops of grape, peanut and pandan flavoured ice cream!

Speech was unnecessary -- Leonard's facial expression said it all! "Hands off! This is my ice cream!"

The entire bill for the 9 of us humans and the 3 dogs waiting patiently in the cab of the pickup truck for their vanilla scoops came up to only RM31.00, which made us laugh with pleasure and surprise. Shahrul insisted on giving us a treat, despite our protests. The dogs, Dolly, Adik and Sri Devi, ate their ice cream during the ride back to the Sanctuary. 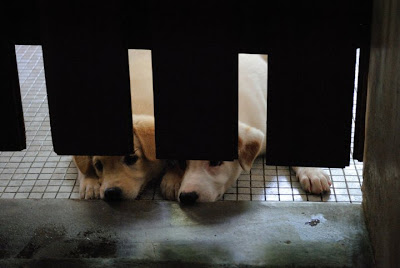 Back at the Sanctuary, two puppies who were quarantined in the kitchen yelped for attention. They seemed indignant at being locked in, while all the action was taking place in the living room and outdoors. 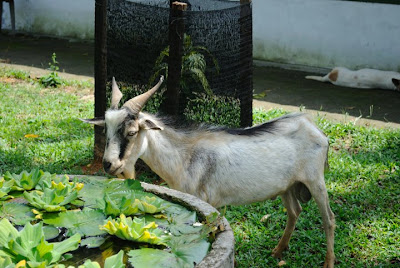 Outside the house, a placid billy goat made a meal of the water lettuce. The raised freshwater pond must have seemed like a buffet table to the goat. 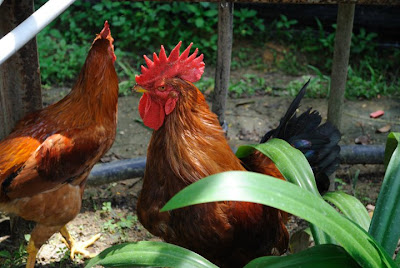 Free-roaming roosters Captain Cook (left) and Handsome (right) are such confident and happy chickens that they didn't think twice about chasing or pecking us when we ventured too far into their territory. 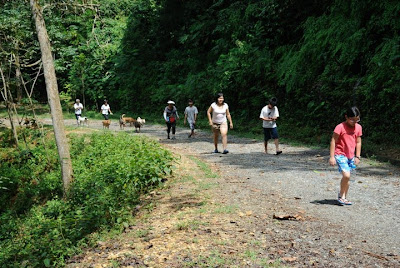 Despite the afternoon heat, we all decided to walk to the stream after Nancy and her troops arrived. It was a long walk, but there is something special and memorable about walking with one's friends, surrounded by nature and accompanied by dogs. 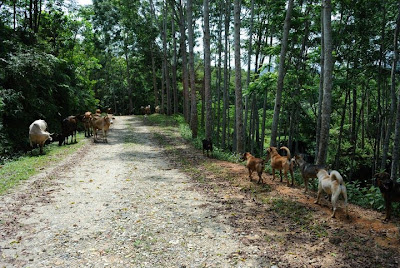 The dogs and the cows meet in a friendly face-off! Who will give way, and who will prevail? 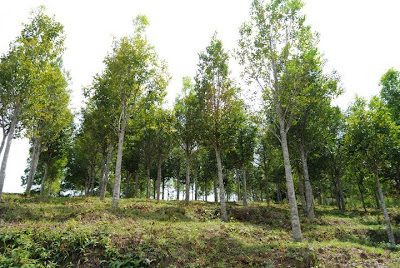 Young timber trees greet us like silent, sturdy green sentinels. The owners and trustees of the Farm Sanctuary had the foresight to plant fruiting trees and timber saplings to make the farm self-sufficient in the years to come. 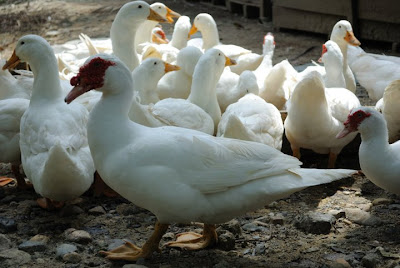 We stop by the duck pond to feed the ducks and geese. All of them seem healthy and happy, but Jorg told us that a large owl, possibly a Malay Eagle Owl or a Buffy Fish Owl, has been killing and eating some of the ducks. However, due to the principles upon which the Farm Sanctuary was founded, nobody is allowed to trap, kill or chase away the owl. Ducks are part of a carnivorous bird's food chain, and all animals, predators and prey alike, have their place in the web of life.

We finally arrive at the stream! Shahrul gets in first and is joined by her beloved dogs. 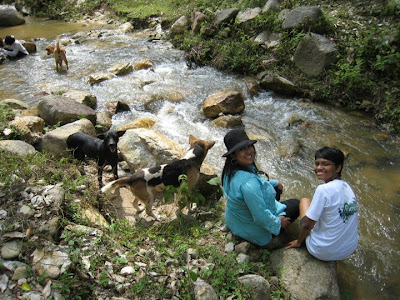 Sasha and Meena are contented to just sit by the stream and watch the dogs play. 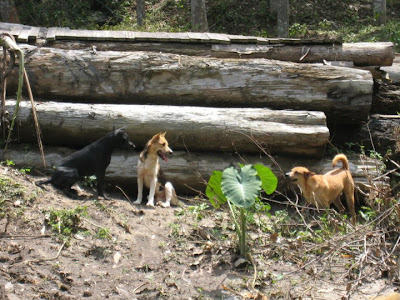 Hitam and Uncle Dog, who are the best of friends, are joined at their shady spot by Sri Devi. 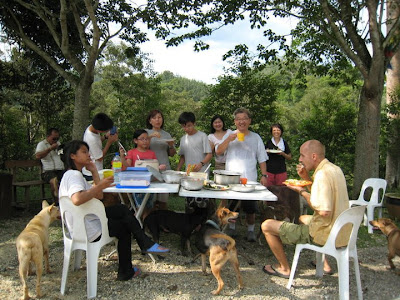 We had a very late picnic lunch under the trees, due to the fact that we were full from all the ice cream and had spent a good many hours playing in the stream and with the animals. The farmhands cooked us a lovely meal of rice, raitha, dhall, eggs and vegetables, while Nancy and her family brought sandwiches, muffins and red bean dessert, and Keats brought belinjai crackers. 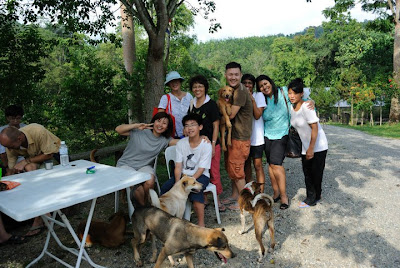 It's time to tidy up and bid our friends, two-legged and four-legged, goodbye! Until we meet again, dear residents of the Bentong Farm Sanctuary, we will be missing you and thinking of you often!

(All photo credits: Leonard and Yen)
Posted by ~CovertOperations78~ at 19:09

You really pack a lot in Ee Lynn. Interesting stuff.

Only and ONLY because you mentioned the stand off twixt the bovine and the canine shall I mention:

A cow intended to cross rhe track on a farm when he stumbled across a rooster that sat in her path.

The cow sayeth to the rooster: Mooooooove!!!!

To which the rooster retorted:

Dear Ellen, Au and Target,
Thanks for coming by! We didn't do all that much last Saturday, because the dogs already had their baths.

Dear Major,
Puerile, but funny! What would the dog say to the cow and rooster, then?

It looks like you all had a wonderful time! And everyone looks so happy - even the dogs and chickens and goats!!! Nice :)

Thanks, dear Pat! Yes, we're all insanely happy. Sugar rush does that to you. See those dogs? They're gangsters. See that goat? He's a gangster. See those roosters? They're both gangsters. They're all gangsters. That's why they are so happy. Cos they know they will never get eaten or abused.

HAHAHAH! I love it that they're all gangsters! Gangsters rule!!! :)

Hey, Ee Lynn we surely had fun. Handsome 'tukked' me when I was looking elsewhere!! The dogs were happy to have company and so were we. The ice cream was a big brunch . I consider myself greedy to have had 3 scoops! Plus ice kacang after that. Could I have bathed the dogs after that??

CO78,
On behalf of all animals on earth, THANK YOU!!!! to you and your gang(sters). har har har...I'm thinking Brad could do with those handmade ice cream instead of just Magnum. purrrr.....meow!

Keats, Handsome really is a caution, isn't he? He "tukked" Leonard, me and two of Nancy's boys too! He's a bold one, that rooster!

I didn't think 3 scoops of ice cream was excessive at all. I would have liked to have 12 scoops at one sitting. And then we could have bathed the dogs and did some farm work to burn off all those calories!

Dear Kitties-in-Sydney,
Thank YOU too for always being so supportive of our efforts. I would like to invite the lot of you to come to Bentong with us the next time you come back to Malaysia. Ice cream is on me!

Does Kedai Ice Cream have Banana Splits on its menu? In English? That peanut ice cream would be incredible in a banana split.

I would hope the menu is in English because I once asked a Malaysian friend to translate "banana split" so I could order it in BM. He pulled a trick on me because the waitress taking my order referred to me as a "naughty man" :)

Dear Louis,
You're in luck! The menu is in English!
But I think the problem you had faced lies in the fact that there is no Chinese or BM equivalent for "banana split". Banana splits are an entirely Western idea. Southeast Asians love ice cream in local flavours, like sweetcorn, durian, pandan or coconut, and often serve it with shaved ice, palm syrup or nut chopped peanuts or corn nibblets. Indians serve ice cream in tall glasses with gulab jamun or raisins and canned fruit and market it as "falooda" or "merry widow". None of these are customarily served with whipped cream, chocolate sauce or maraschino cherries. So your request for a banana split, even if it had been understood, might not have been complied with. Indeed, the waitress might even tell you that bananas and whipped cream might clash with the flavours of the ice cream.

Hi Sir,
I am an animal lover Malaysian currently residing in the US. I am now back in KL for a short vacation and would like to make a trip to Bentong Farm Sanctuary to see the animals. May I know who should I arrange with? The date of visit is intended to be next Thursday, July 14th. please write to my email: kellyhoh@yahoo.com and I shall contact you back immediately. Thanks a lot!
Kelly Hoh

You can also find them on Facebook under "Bentong Farm Sanctuary". Shahrul is quite active on FB these days.

Sorry, but for security reasons, I prefer not to give out my email address or to email people I do not know in real life.