"Cats of Concern" and other news

My office recently saw an increase in roaming cats, mostly pregnant and nursing queens. Some of these are strays, and some are poorly looked after cats from the neighbouring homes. The latter comprises cats that are not being fed or cared for adequately or are abandoned after they are found to be pregnant, so they have wandered into our office in search of food.

On Deepavali Eve, we found a previously friendly mother cat limping back to the office, dragging her kittens by the feet. Someone had cruelly tied the mother cat's feet and kittens together with rubber bands. The mother cat managed to free her feet but not her kittens. The kittens subsequently died, while the mother cat survived but with a badly injured and infected paw. We are unable to catch the mother cat for treatment as she has since become very skittish and mistrustful of humans.

This caused an outrage among animal-loving colleagues, and I offered to bring the cats to the SPCA for neutering and spaying, 1-2 at a time, provided we can raise the funds.

My initial plans were to pay for the spaying myself. However, I suddenly found myself caring for both a dog (Bravo) and a cat (Ebony) with broken hind limbs and spinal injury brought to me by well-meaning friends. The vet bills have run into the thousands, without even taking into account food and miscellaneous expenses.

Taking into consideration the urgency of the matter (i.e. if we don't get the mother cats spayed immediately, they will start reproducing again) I appealed to the goodwill of the SPCA to assist me in spaying/neutering a predetermined number of cats free of charge, e.g. 10 - 20, to help tide me over the next few months until I can afford to pay the spaying fees again, and to send the Inspectors over to speak to the neighbouring homes that are allowing these cats to breed and roam, and to advise the caregivers to neuter the cats.

And so SPCA Selangor very kindly offered to spay the cats for me as a form of community service under Mission Help. Several of my colleagues helped to set up a Feline Rescue, Neutering and Resettlement Initiative to find durable and humane solutions to the problem of cat overpopulation. 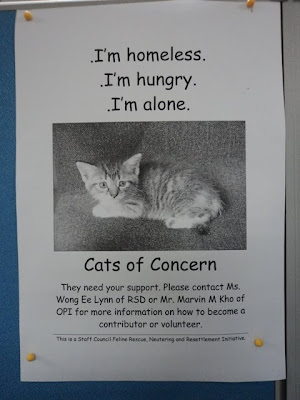 An emotional appeal made by my colleague and buddy, Marvin, for our Feline Rescue, Neutering and Resettlement Initiative. 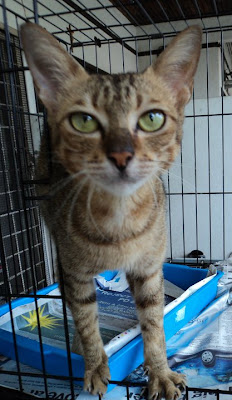 Tibbs was the first cat to be spayed, dewormed and given a flea bath. She is estimated to be 5- 6 months old. 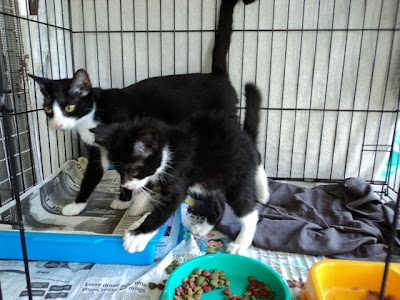 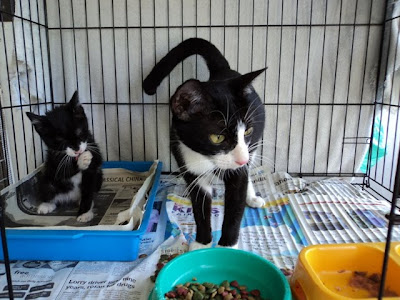 Tuxedo (age: 7 - 8 months) was spayed in early December. Tuxedo and her baby Sylvester (age: 3 months) have both been treated for worms and fleas. 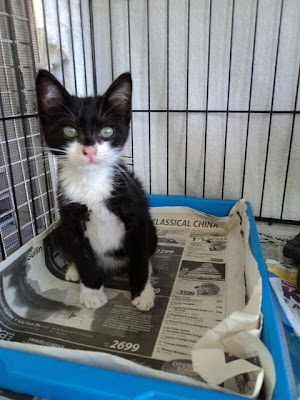 I will offer to pay for Sylvester's neutering in the event he is adopted before he is old enough to be neutered. 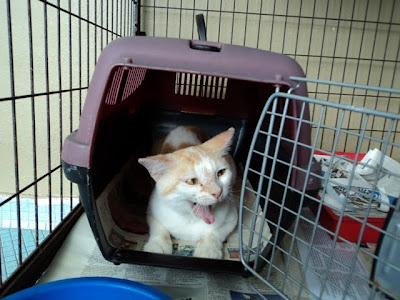 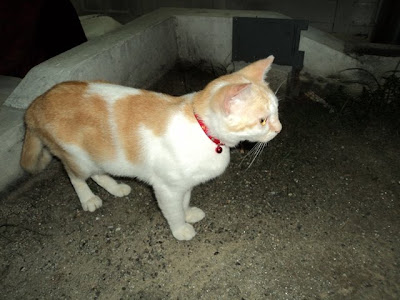 Gangster Mama has since been renamed "JD" by my colleague Vilz (a.k.a. The Stig) and has been treated for worms, fleas and ringworm after she was spayed. She has a sweet, loyal and intelligent personality and enjoys human company.

I have put collars on all the cats but have modified standard collars to make them quick-release in the event the collars are caught on anything. All the cats above have been spayed, dewormed and given flea baths. They have been returned to my office for the time being, as I do not think it is humane to keep previously free-roaming, streetwise cats confined in cages for weeks and months on end. They are still looking for good homes, so if you know of anyone who is looking to adopt a cat, please ask them to contact me. 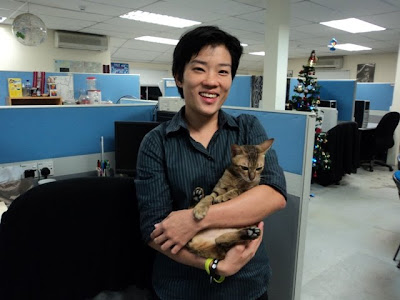 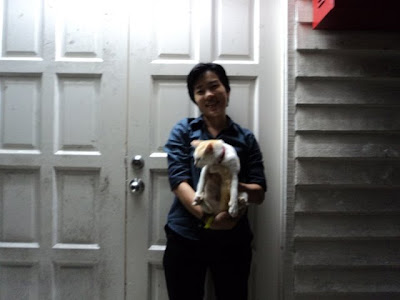 Project Second Chance and the Feline Rescue, Neutering and Resettlement Initiative are still short on resources and need contributions in the form of cat food, vitamins, deworming syrup, flea shampoo, ringworm shampoo, wound spray and brightly-coloured cat collars. We also need fosterers in the event I have to be away for a weekend or on a work mission. If you are able to help or know anyone who is able to help, please be so kind as to contact me. All help and forms of support are greatly appreciated.

I turned 32 on the 9th. I often observe my birthday on my own by donating blood and doing something beneficial for a worthy cause, such as purchasing much-needed school supplies and groceries for welfare organisations and outreach groups. That Special Someone observes his birthday by distributing parcels of food to the hardcore poor, and I look forward to doing it with him when we are finally together.

This particular birthday was remarkable only in that I received the greatest, most significant gift in my life: A marriage proposal from That Special Someone. It was not the first time we had discussed marriage, but somehow there was a certain weight to this particular proposal which made it all seem so much more real and meaningful somehow. I was on a 2-day work mission at an Immigration Detention Centre in a remote small town, and had been on Skype with That Special Someone at the material time when he proposed to me at midnight. I don't think I could get any happier than this, but I probably will, when we are finally married. I look forward to a lifetime of environmentally-responsible, socially-just adventures with my Special Someone and days filled with animal care commitments, community service and being loved.

Due to the fact that I was on work mission, I was unable to go to the Vihara or carry out any charitable activities on my birthday, and decided to postpone my plans to another day. In retrospect, it was fortuitous that things turned out the way they did, because something happened to someone who was in grave need and is deserving of help, and my contribution was able to help him in some way.

But karma has a funny way of coming back to you, and two days later I received an email from a friend who had been abroad and who had read of my animal rescue efforts. She managed to obtain my bank account number from a mutual friend and made a donation to me for Project Second Chance, and her contribution happened to be in the same amount that I had given to the individual in need of help earlier. What a strange instance of quid pro quo -- I had helped someone who had lost everything, and in return someone else provided help for the animals under my care. I may be destined never to be rich (not because I am bad at managing my finances, but because I give so much away), but I don't think the Divine Being intended me to be poor either. And so I am assured afresh that no matter how little I have, there will always, always be enough to share. 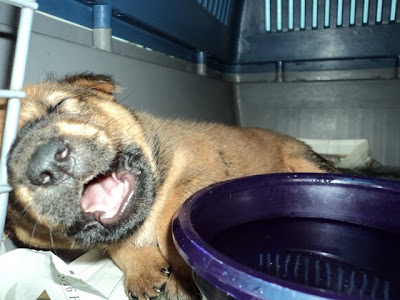 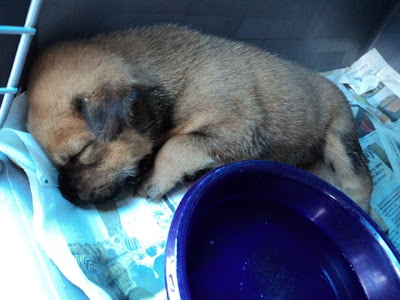 A little sleepyhead at the SPCA -- It was a slow day for adoptions. 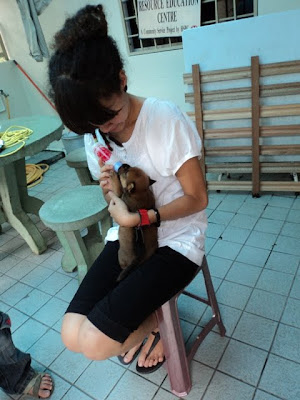 My friend Fiza bottle-feeding Puppy after the latter woke up. 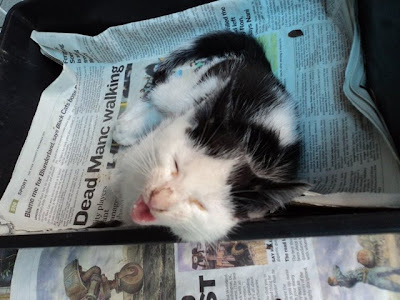 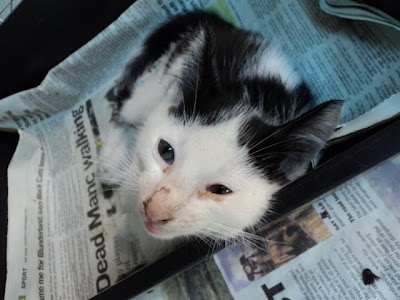 This little kitten was crying for her Mama at the SPCA. I brought her home after I had finished my animal care duties for the day and have since treated her for worms, fleas and eye infection. I have named my fostered kitten "Neko" on account of her oriental eyes. 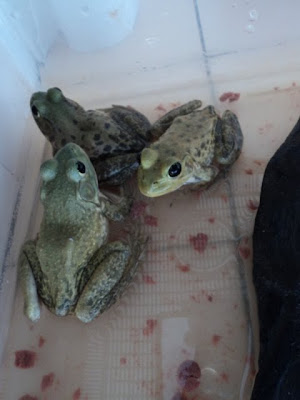 Someone's pet frogs being boarded at the SPCA Bungalow for the week. 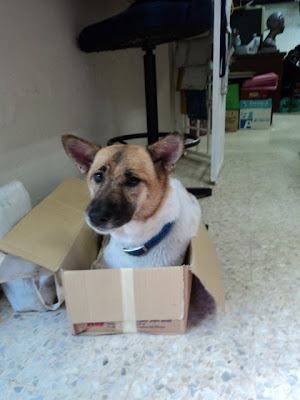 Lulu sulking in a box after we removed the rotten old couch. 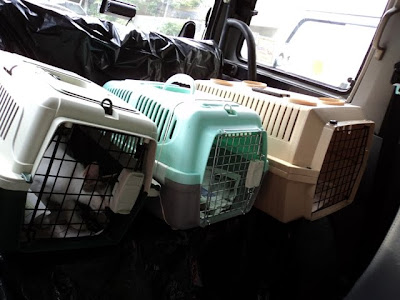 There isn't any glamour in being an animal rescuer! Your car seats are lined with bin bags and you drive around with pet carriers, an animal First Aid Kit, and pouches of pet food to bait frightened and hungry animals with.
Posted by ~CovertOperations78~ at 18:40

CO78,
If Mama will let me, I'd like to exchange Brad with Tuxedo and Sylvester. har har har *evil laughs*

yeah!! i still remember last year's posts about the blood donation! it was on your birthday too if im not mistaken!!
oh..i still couldnt make a blood donation. the nurse said my vein is too small... any advice?

and congratulations!!!!!!!!!! im so happy for you~!! hope you'll have a wonderful life with that special someone~!

If we spent the money on bullets for shooting dogs and other strays on TNR programmes, we could lick this problem in a year or so.

Dear Angelina,
I thought "evil laugh" was Brad's trademark? I'd be thrilled if you could help us find Sylvester and Tuxedo a home. They are quite skittish and not very fond of human contact right now but all it takes is a little time and patience to make them friendlier. Please inform your Mama's friends in Malaysia that if they want to adopt cute cats who have already been spayed and dewormed, I am the person they can contact! Thanks, kitties!

Congratulations are in order, aren't they? And I now realise why people were congratulating you on Facebook!

So, congrats to you and your Special Someone, E!

"I look forward to a lifetime of environmentally-responsible, socially-just adventures with my Special Someone and days filled with animal care commitments, community service and being loved." - You DO know you're killing me here, no?! Hahahaha!!!

Dear Ili,
Wow, that's quite a memory you have! Small veins -- maybe put a hot water bottle on your forearm until the vein starts to bulge? My recommendation is not to donate blood, but to find other ways to contribute instead. I don't want you to suffer bruising or other health complications by trying to make yourself donate blood when physically you may not be a suitable donor. I am sorry -- I do know how much you love to volunteer and help others! We'll find other stuff to do, okay?

Thank you for the congrats! There's still a long way to go and many challenges ahead!

That's what the animal rights groups have been proposing all along! If we would only get all the govt vets to participate in community neutering programmes several times a year, and have the local councils bring all captured animals to certified vet clinics for neutering and release, we could lick the problem in months! Singapore can do it, why can't we? It's all in the mentality!

Thank you, thank you! Why are you laughing? Isn't that what marriage is about? That you won't have to clean kennels alone anymore? That there will be two of you to pick litter off the beach, not just one? To me, that's what a marriage is about. And the last relationship I was in couldn't deliver any of this, there was no equal partnership, no common ground, no mutual love and respect anymore, and so it broke down. And I am glad things turned out the way they did, because I wouldn't have found my Prince Charming and soulmate otherwise!

Best wishes to you and That Someone Special for a very happy, fulfilling and comfortable life together.

Thank you, dear Louis! Happy and fulfilling it shall be, but I can't promise going anywhere with me will be comfortable! ;) I wish you and yours a very Merry Christmas!

so happppyyyyyyyy for you. and also for that special one. I'm sure it's the best birthday present ever ..

and keep up the good work for the animals

Thank you, Abang Rizal! It was definitely the best birthday present ever. As for photos, there is a right time for everything. I will post photos and more info when the time is right. There's still a long way to go. Thanks again for your support!