Letter to the Editor: Cleanliness A Critical Issue At Batu Caves During Thaipusam

LETTER TO THE EDITOR:
CLEANLINESS A CRITICAL ISSUE AT BATU CAVES DURING THAIPUSAM

I commend the Selangor State Government for enforcing its directive against having entertainment and gaming activities in places of worship ("Taking the fun out of the fair", Metro, Jan 19). Not only does the annual Thaipusam funfair at the Batu Caves temple complex pose a hazard to human safety, it also generates excessive noise and light pollution in an area known for its natural beauty and as a religious sanctuary.

Another pressing concern at Batu Caves and most other tourist destinations in Malaysia is that of litter and waste management. On Saturday, 22.1.2011, I joined a multiracial band of volunteers called "Sampah Masyarakat" to clean up the Batu Caves temple complex. Our group of 50 volunteers collected approximately 12 tonnes of rubbish in under 4 hours. Although following Sampah Masyarakat's cleanup campaigns in previous years, the Batu Caves temple complex committee has responded to our requests to provide more rubbish bins, it is noted that the volume of rubbish still exceeded the bins' capacities. Rubbish consisting mostly of food waste that was piled up next to bins remained uncollected, while plastic bags and styrofoam packaging were carried all over the temple complex by wind and rainwater due to their lightness. Despite the greenwashing propagated by the plastics industry, plastic bags and styrofoam are not recyclable, especially when contaminated with food, and so the waste collection contractor engaged by our volunteer group was unwilling to collect the styrofoam packaging which made up the bulk of the litter collected.

The solution to the problem of litter and waste management is not to have ever-increasing numbers of volunteers to clean up public places after major festivals and events. The solution lies in finding ways to deter littering and to create incentives for waste reduction. My recommendations include:

1. Restricting the sale, distribution and use of plastic bags and styrofoam packaging during the Thaipusam festivities through public education efforts to encourage devotees and visitors to bring their own food and beverage containers, and by instructing stall owners to use less packaging and alternative packaging such as brown paper, banana leaves and washable tableware;

3. Providing more rubbish bins within the temple complex and making frequent announcements over the P.A. system to remind devotees not to litter in a place of worship;

4. As most of the stalls and shops were found to have left large amounts of litter and waste behind the stalls and on the playing field of SRJK (T) Batu Caves, measures have to be implemented to issue summonses to stall owners who fail to dispose of waste properly. Stall owners must be made responsible for the cleanliness of the immediate surroundings of their stalls and must transport their rubbish out of the temple complex premises at the end of each trading day;

5. Instituting a nationwide deposit system for recyclable items such as aluminium cans, PET bottles and beverage cartons. The cost of purchasing packaged food and beverages in Malaysia does not reflect the cost of disposing of them and managing the waste generated. If a 20-sen deposit were to be charged for each unit of recyclable packaging, which will be claimable at designated recycling centres, it would create an incentive for people to collect and redeem their recyclables for cash, and this would also hopefully translate into less litter ending up in places of natural and cultural interest.

Litter reflects how a society views and values itself, and is a form of anti-social behaviour. Measures to inhibit littering must include both penalties for littering, as well as motivations to reduce waste and to encourage the public to take pride in their surroundings. It's time we take ownership of our community and public spaces by taking responsibility over them. It's time we discard the mindset that someone is paid to clean up after us. At the next religious festival, let's make ourselves worthy of the houses of worship we visit by making a conscious effort to keep it clean. 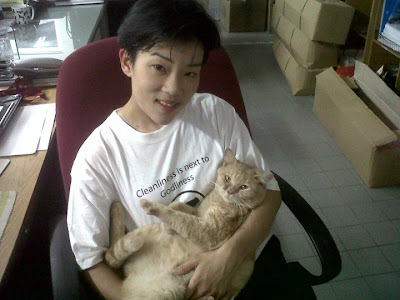 Me with Big Boy, Nicole's latest rescued cat, at the SPCA. Apparently he shouldn't be manhandled so soon after neutering, but he seems to like me and fell asleep in my arms. 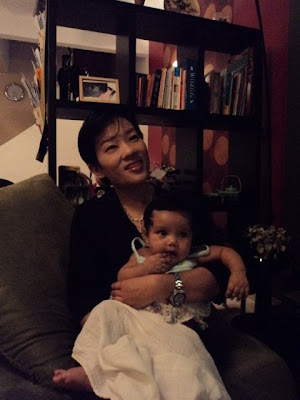 The SPCA gang has yet another potluck party, this time at Jacinta's house. I am having a great time cuddling Jacinta's baby, Isabel. Babies and children love me almost as much as animals do! 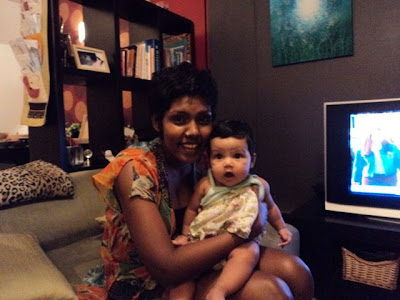 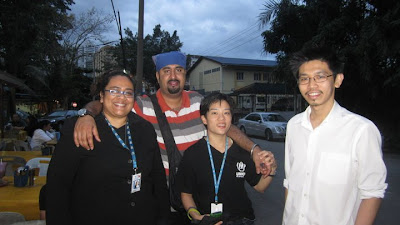 My buddy Amarjiet returns for a visit from Canada. Here I am having tea at the roadside on a Friday evening with the gang. 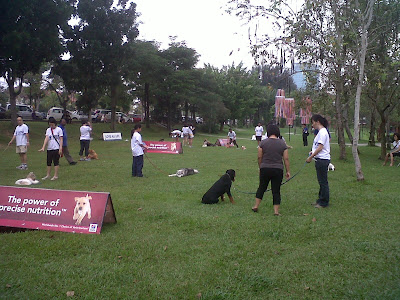 I passed the Bandar Utama Central Park on Saturday evening after the SPCA and saw a dog obedience class taking place at the Park. This is an initiative supported by the Malaysian National Animal Welfare Foundation to create good canine citizens.
Posted by ~CovertOperations78~ at 18:55

yeah... cleanliness is a critical issue in Malaysia. for big festivals, such as Thaipusam, i think big sign boards or maps for rubbish bins are needed too. :)

I wonder what they're teaching in this "ethic and moral" class. Seems a waste of time if it doesn't even teach common courtesy.

Your final paragraph really cuts to the heart of the issue, both in summing up the causes of that disgraceful behavior (littering) and in pointing at the only real solution to the problem: a change of mindset through education and enforcement of the laws and punishment for not observing them. Perhaps the vendors at large public events should be required to make a substantial cleaning deposit for the area around their stalls which will only be refunded if they leave that area clear of litter.

Dear Ili,
Thanks for coming by! I think signboards and maps won't work for Malaysians. I think Malaysians need to have BIG HAMMERS coming down on their heads to wake them up instead.
Big Boy looks macho but is very cuddly and affectionate.

Schoolbooks do teach pupils about cleanliness, but guess what happens when they go home? Parents tell them to drop litter on the ground when they are out at the shops or playground, and tell them that someone's paid to clean it up. I saw a little girl at a park trying to look for a bin to put litter in before she and her family went back to their car. Her mother smacked her hand to make her drop her litter and told her not to bring her rubbish into the car. I saw another little girl outside a clinic not wanting to drop a used tissue on the ground because "teacher says we mustn't throw rubbish everywhere", but her mother threatened to slap her for "being too clever" and made her drop the tissue on the sidewalk "or else". Since when did using a waste bin for litter amount to "putting on airs"?

Dear Kitties-In-Sydney,
Babies, big cats, little cats... all respond very well to cuddling. Bad humans, indeed. But bad humans aren't beyond redemption. I hope one day they will switch to being good humans. It takes effort and faith, and I have plenty of both.

Dear Louis,
Thank you for your valuable feedback. I believe it isn't sufficient to just require the vendors to pay a cleaning deposit. I think people need to be aware of where their waste comes from and where it goes to, and to take steps to reduce waste. If we were to make traders responsible for carting away their own rubbish at the end of the day, I believe they will take steps to reduce the waste their customers will generate, for example, by using less packaging, by not giving away pamphlets or 'free samples', by offering dine-in options, etc.