I have been in a state of perpetual melancholy since Louis' demise. The daily thunderstorms and the fact that I am overwhelmed with responsibilities do nothing to improve my mood.

Every week is an endless stream of football matches, reports, research papers, housework and volunteer commitments.

I am currently providing treatment and care for 2 kittens, Toby and Oscar, under Project Second Chance. If it weren't for the fact that I have to be in Singapore this weekend to play in a football match, I would be bringing home another 2 from the office, Hopscotch and Duchess, for medical treatment and vaccination. In the meantime, my colleagues will have to help me feed the two feline waifs until I am back from battle.

Last Sunday had been another wet and blustery one. It started raining when I was in the middle of giving tick baths to the SPCA dogs, so I moved on to cleaning the kennels and cattery instead. However, as the floodwaters kept rising, I decided there wasn't much point in cleaning and disinfecting the floor, and started checking on the animals in the lower-lying parts of the shelter instead. After securing tarps over the cages and making sure our drains and rain gutters were clear of obstructions, I barrelled over to Sunway Pyramid to join the SPCA Marketing & Communications team at the PetFinder 3rd Anniversary Charity Fair.

PetFinder is a local online portal with the objective of rehoming animals and reuniting lost pets with their human guardians. Unfortunately, there are no restrictions as to who may utilise its services, so it is widely used by backyard breeders and pet stores as well as rescue groups and animal welfare organisations. Still, any effort to rehabilitate and rehome animals is better than none.

While many recognise SPCA and PAWS as registered organisations and MDDB/MCCP and MY Animal Care Org as established animal rescue groups, organisations like Paws Mission and HOPE are new volunteer-run animal rescue and care groups that operate out of the homes of members and volunteers with the help of vets, much like how Project Second Chance started 3 years ago.

The Charity Fair was a resounding success, as the photos below attest: 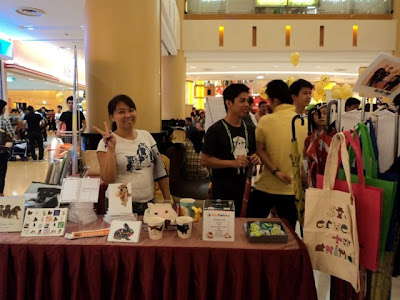 Nicole and Kelvin attending to customers at SPCA Selangor's merchandise and outreach booth. This is Nic's standard pose. 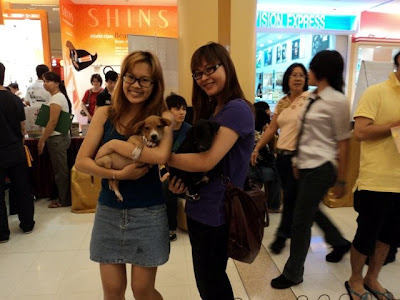 These puppies were brought in as mascots and have already found homes. Here, the puppies receive some much-needed tender loving care from kind visitors. 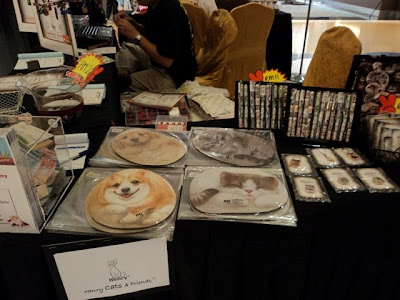 Adorable Henry Cats mousepads, keychains and magnets for sale to raise funds for Paws Mission, an animal rescue and welfare group based in Old Klang Road. 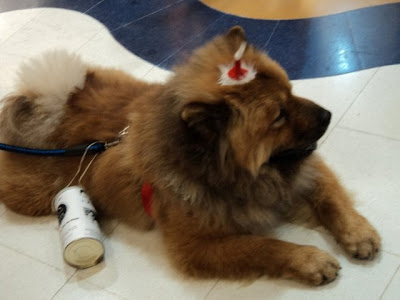 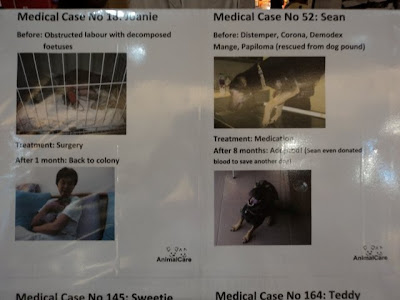 Case histories, with before and after pics, from MYAnimalCare.Org.

MYAnimalCare.Org is an animal rescue & welfare organisation that also does pro bono public education and awareness work and produces publications for distribution. 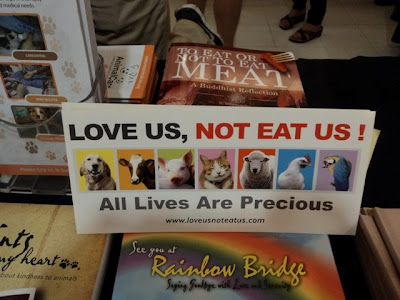 "All Lives Are Precious", avers this beautiful sticker produced by MYAnimalCare.Org. I acquired one for That Special Someone and one for myself. 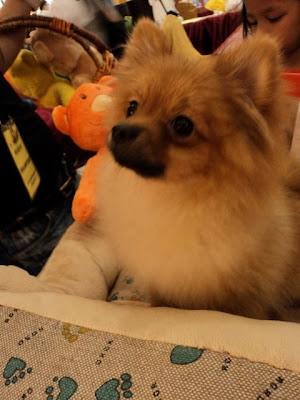 Bola, the 5-month-old Pomeranian, helped to raise funds for his less fortunate canine and feline friends. 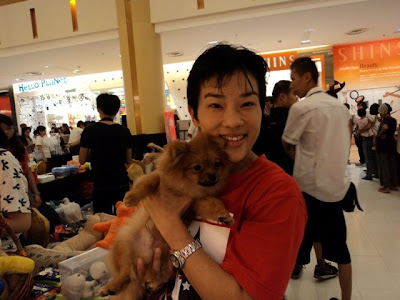 "Rescued" may be my favourite breed, but I couldn't resist giving Bola a squeeze. 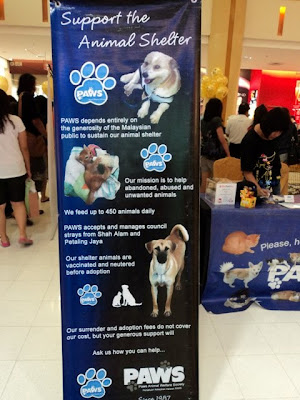 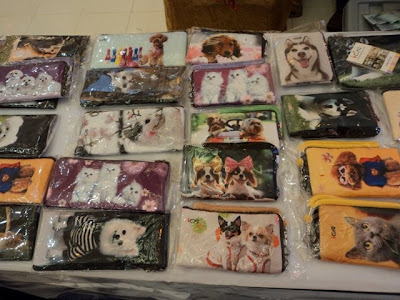 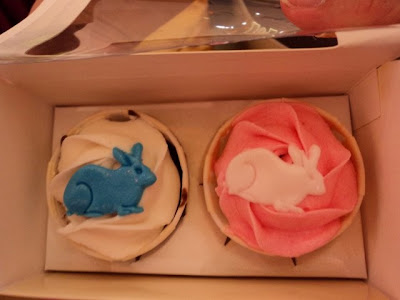 Easter cupcakes given out to volunteers at the end of the day. Yummers. I had the blue one and Nic had the pink one. 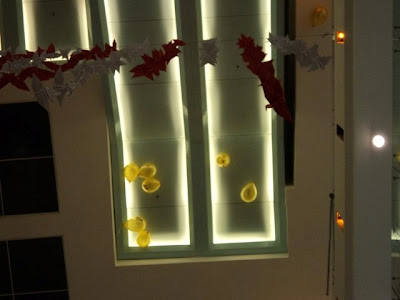 Escaped helium balloons adhering to the ceiling. Save-A-Stray was offering a balloon for a minimum donation of RM5, so that's RM35 over there stuck on the ceiling. 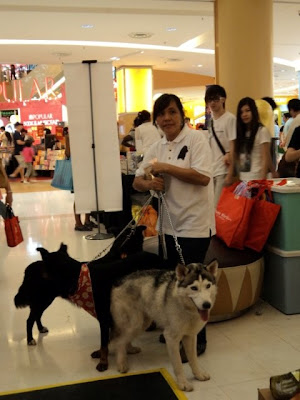 The fundraising canine team all ready to go home after 2 days of hard work. Poor doggies hardly had any rest. All the visitors wanted a photo opportunity with them. 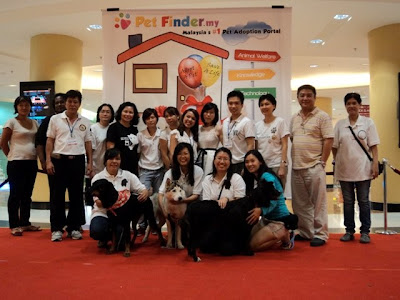 A group photo of the representatives of the various organisations for posterity.

Cash donations amounting to RM20,362.70 were collected and distributed to the aforementioned organisations, and the organisations collectively made over RM15,000 from the sale of merchandise over the weekend. Heartiest Congratulations to PetFinder on their 3rd Anniversary and many thanks for the funds raised for these deserving animal welfare organisations.
Posted by ~CovertOperations78~ at 20:19

CO78,
Aaah....I missed that as we had to be elsewhere over the weekend. Hmmm...that Bola looks to sweet and adorable. Can anyone resist that cuteness? purrrr.....meow!

Thank you for coming over, Kitties from Sydney! Bola helped to look after a donation jar which says: "Hello, I am Bola! Can you please donate money to help my brothers and sisters who are less fortunate?"
He did a good job. The jar filled up.

Agree with Kitty Kat: that Bola is the cuuuuuuutest!

You're doing good work, my dear. Bless you.

Thanks, Pat. Your support means a lot to me. We all do what we can. I tried talking to my therapist about Louis today, and I couldn't finish. I kept choking up. It's still affecting me very much. Maybe next week I will try talking about it again. Sigh.

Yes, dear, I miss Louis, too. I knew he wasn't for much longer in this world, but even then, he was gone too soon.

Take a leaf out of his book on life, and know that he would want you to move on. He was a realist, E. A very practical man. And he'd have been really upset to learn that you were still grieving for him.

There is not a day goes by that something doesn't remind me of him. And I smile, and I think, 'Louis', and I know that he will live in me for the rest of my days. And that brings me comfort.