When I first learned that the Asia for Animals Conference 2011 would be held in Chengdu, Sichuan, China, I assumed, perhaps unfairly, that we would have our work cut out in a country known for abuses against animals, particularly wildlife, and that vegetarian food would not be available outside of the Conference venue. I even flew to China with over 10 kilogrammes of instant aloo gobi, granola bars and instant mashed potatoes in my rucksack.

Chengdu exceeded my expectations, but perhaps it was only because I was in very good company. Here are photos taken while exploring Chengdu on foot and by Metro with my gang. 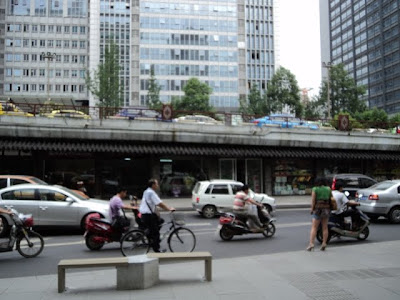 Chinese cyclists and motorcyclists. For a communist country, China sure is lawless! Nobody wears a helmet or a seatbelt and they all drive in any damn direction they please. It was like being in a blender, with vehicles going in all directions at high speed. 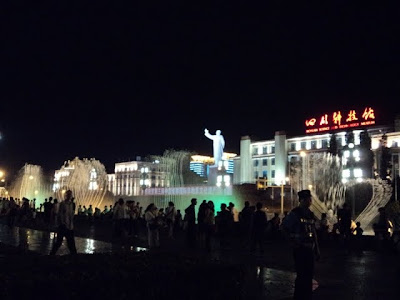 Chairman Mao at Tianfu Square. Outside the Sichuan Museum of Science and Technology. Very commie. Even the musical fountains are ludicrously commie. 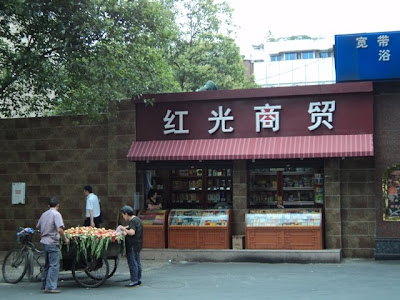 A cart selling fresh peaches outside a convenience store across the road from a bank. Gloriously cheap, at only 5 peaches for 5 yuan. It would have cost me 3-4 times the amount back home. 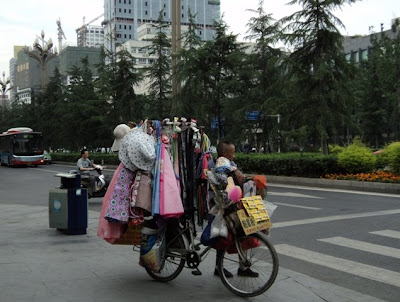 A petty trader on his overladen bike. This is the kind of stuff you see in those "Only In China" e-mail forwards. 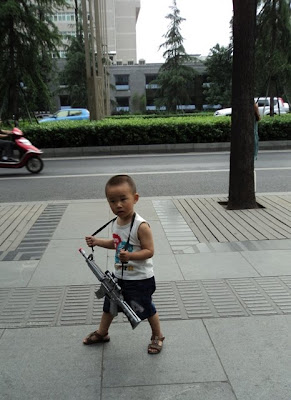 Ha! A Chinese child soldier! I don't think he was forcibly conscripted. He looks too pleased with himself. 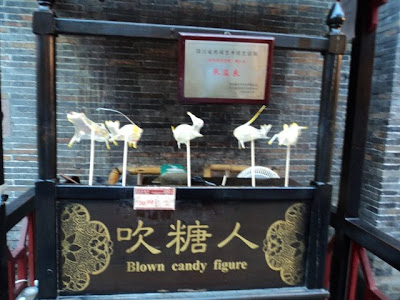 Blown sugar animals on sale at a stall in Jingli Street! No animals were harmed in the process of making these treats! 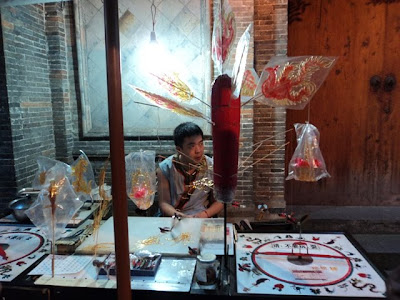 Sugar animals for sale, also at Jingli Street, a tourist attraction. The sugar animals were made using molasses poured over a flat surface. 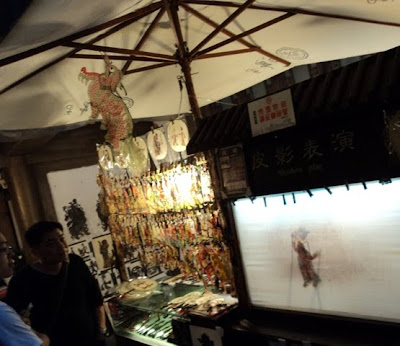 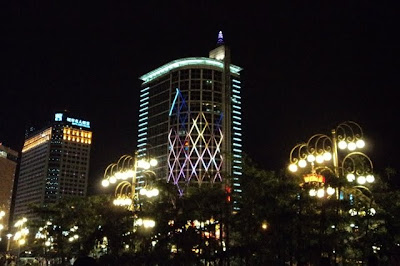 Animated light displays at Tianfu Square. So this is what our coal-fired power plants were providing so much energy for! 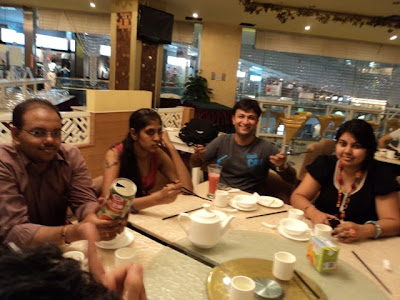 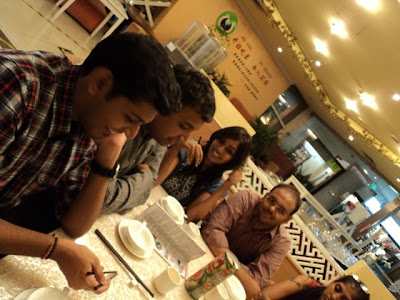 Waiting for our food to arrive at Loving Hut Vegan Restaurant. Good thing we eat 3 hrs after the average Chinaman has dinner, so we had the cooks and waitresses all to ourselves. I stretched my linguistic abilities to the utmost in China as I had to play the role of translator to my friends from India. 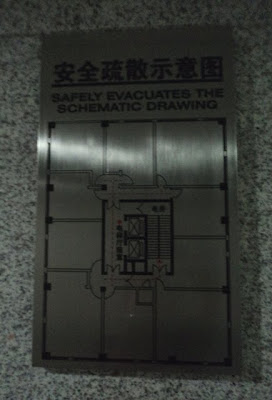 Yeah, in case of emergency, evacuate the schematic drawing at all costs. To hell with your passports and valuables. 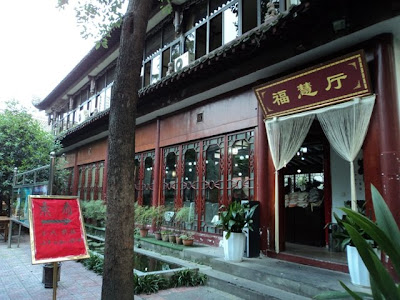 Another vegan restaurant that we loved very much and frequented for the entire week, located in Wenshu Monastery. The food was spicy and delicious. 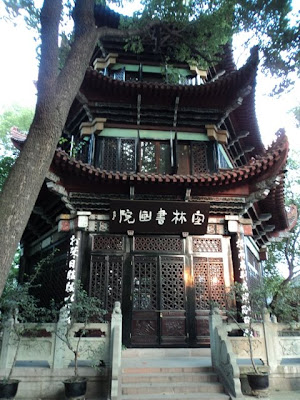 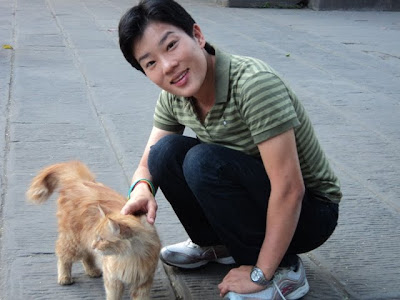 An obliging Chinaman helped me take this photo. I went out to play with the temple cats within the compound of Wenshu Monastery while waiting for our food to arrive. 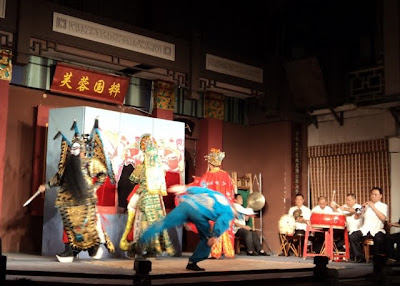 We ended up watching the Sichuan Opera on our second last night there. A bit like the noisy affairs we get every Seventh Month of the Lunar calendar. Only pricier. 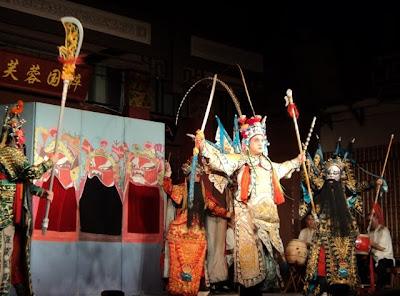 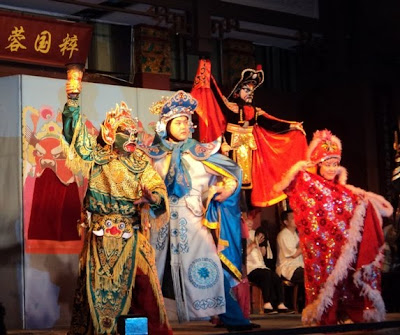 "Changing Faces", known in Mandarin as "Bian Lian". I used to be obsessed with lion dance and bian lian performances when I was young. Until I learned that most of the bian lian masks were made of silk. Poor silkworms! 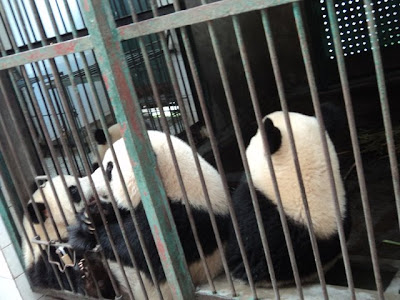 Yearling pandas at the Chengdu Panda Breeding and Research base. I felt sorry for them because their enclosures reminded me of the SPCA Sick Bay kennels. 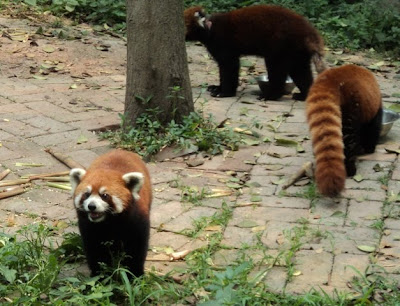 Cheeky red pandas at the Chengdu Panda Breeding and Research Base. At least there is more enrichment in their enclosures. 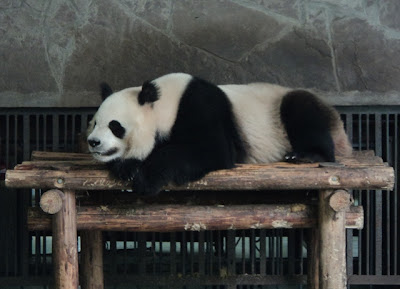 Tian Tian, at age 20 (60 in human years), is a senior citizen at the Panda Breeding and Research Base. 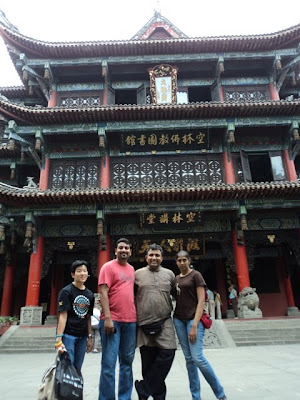 With my buddies outside the main prayer hall in Wenshu Monastery. May we always continue to work towards improving the welfare and lives of animals everywhere!
Posted by ~CovertOperations78~ at 17:38

Ni hao CO78! That ginger is soooo flooofy. Did you get a belly rub? I'd like to play with the cheeky red panda. Would they eat me? har har har *evil laughs*

Those molasses animals are an amazing work of art. I remember standing at the stall for ages watching them work their art. Fascinating!

Hello, Kitties-from-Sydney!
The temple cats are adorable and very tame and friendly. The street animals in China are frequently fed by the elderly in the area, nicknamed "Gou Ma Ma" and "Mao Ma Ma" (i.e. Dog Mums and Cat Mums). The local shelters and SPCAs will then assist the Dog and Cat Mums in getting the animals neutered and treated for minor ailments.
As for red pandas, I believe they are omnivores. They might not eat you but I think they would want to fight with you! I saw a few with fight wounds!

Dear Angie,
How good of you to come over! The molasses animals look too good to be eaten, don't they? I also like the dough figurines. Chengdu has a fair bit more culture than many other places in China, and that was what made our trip more enjoyable and memorable!

Love that one with you and the kitty :-)

Thanks, Ellen, Au and Target!
I found the kitties in Chengdu friendlier than the dogs. The doggies are mostly aloof, like the people.

Hahahaha.... I enjoyed reading this one, especially how the traffic is like a blender.

Another question: How did U communicate there? I happen to notice that U don't speak much Chinese!

Dear Ahan,
I do speak Mandarin reasonably well, I just can't write or read beyond the basic stuff. In fact, I had to play the role of translator to my friends there. Thanks for stopping by!
~ CO78

Hi E! Sorry I'm so late here - for some reason, this page wouldn't open for me until today :(

Loved the pix, and the stories that went with them!

I can't decide between that leetle soldier boy and that amazingly ginger cat for picture of the day!

Dear Pat,
Thank you for enjoying my photos! I used to have a toy machine gun just like the one the little soldier boy has! It's a pity that there are now laws in the US and EU prohibiting toy manufacturers from producing toy guns in realistic colours! Holding a bright yellow and orange Nerf gun just doesn't have the same feel as a big badass black machine gun!
As for the ginger cat, he just wouldn't look at the camera.