Letter to the Editor: Harasment of Wildlife Can Never Constitute Ecotourism

LETTER TO THE EDITOR:HARASSMENT OF WILDLIFE CAN NEVER CONSTITUTE ECOTOURISM 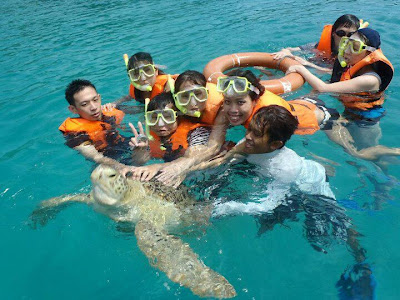 A video clip and photographs which surfaced on the Internet this week of a group of tourists and snorkelers harassing, restraining and attempting to ride on a sea turtle created an uproar among netizens and necessitated an investigation by the Departments of Fisheries and Marine Parks. What appalled netizens was not only that the tourists were engaging in the thoughtless, cruel and irresponsible act of harassing the turtle, but were encouraged to do so by the tour operator / snorkelling guide as part of their marine holiday experience. There was no regard for the safety, welfare or well-being of the unfortunate turtle, in spite of the obvious consequences that stress would have on the feeding, mating, breeding and resting patterns of a wild sea turtle.

All too often, such instances of cruelty to wildlife are passed off by irresponsible tour operators as ecotourism. Tourists are only too happy to have a photo opportunity with restrained crocodiles, tigers, turtles, primates and dolphins in order to have their “money’s worth” from the holiday package. There are insufficient regulations on what businesses may use the label of ecotourism, despite the existence of a National Ecotourism Plan and a relatively sophisticated legal framework where wildlife and the environment are concerned. Some tour operators and tourist destinations even argue that direct contact with animals during activities such as elephant rides, photo opportunities with captive wildlife, the feeding of wild birds and monkeys and petting zoos are important to enable tourists to get acquainted with wild animals and thus learn to love them. This idea is not only fallacious but also harmful to the welfare of animals.

Consumers should carry out basic research on tourist destinations and tour operators before paying for services and experiences that may in fact harm animal populations, the natural environment and the local community. A basic guide to choosing a responsible ecotourism service or experience may include the following tips:

· Do not engage in activities such as the feeding of wild birds, wild boars and macaques. Feeding wild animals causes them to lose their fear of humans, which makes it easy for them to be hunted or poached. It may also lead to a rise in aggression and human-animal conflict. Macaques are frequently emboldened by contact with humans and end up trespassing into buildings and attacking people. Feeding animals also affects their ability to learn to forage for their own food, and causes them to be dependent on humans for food. Human food such as processed snacks and sweets can also pose health and choking hazards to animals.

· Do not patronise the services of companies that drive off-track to harass animals. Insist on walking to a sensitive ecological site to appreciate the flora and fauna present. Ecotourism must necessarily sensitize people to the beauty and fragility of nature.

· Do not engage in activities such as elephant rides or photo opportunities with tigers, wild birds, reptiles and other wild animals. Most of the animals used in photo shoots are physically restrained using ropes and chains, or doped or overfed into becoming lethargic and passive so they could be easily handled. Animals are trained to give rides or perform tricks through beatings and cruel training methods, including by the withholding of food. Learn to appreciate wildlife as they are, and from a distance, without feeling the need to manhandle and hold them. Be happy in the knowledge that you have seen them in their natural environment, and that your tourist dollars will help maintain their sanctuary and improve their living conditions.

· Conduct due diligence on the destination you are about to visit. Research the travel operators or destination, and read the reviews and complaints of other travellers. Some zoos, safari parks and aquariums may have directly contributed to the poaching of animals from the wild, or resorted to cruel and stressful training methods. Avoid any travel attraction featuring performing animals. Animals performing tricks do not teach you anything about the natural history of the animal, their conservation status or their needs.

· True ecotourism will take into account natural resource and waste management, provide empowerment and economic opportunities to indigenous and local communities, minimises environmental impact, and fosters environmental awareness and respect for the environment, local population and animals. Good ecotourism practices may include activities such as beach and reef cleanups, tree-planting, data collection work and other hands-on activities that enable holidaymakers to make a positive difference to the ecologically sensitive site they are visiting.

We encourage all travellers and netizens to be proactive and play the role of the eyes and ears of non-governmental organisations and enforcement agencies, since a boycott by a handful of individuals may not have the same leverage and impact as a public campaign to end harmful practices and prosecute offenders. The trade in and consumption of wildlife should be reported to WWF Malaysia, the Department of Wildlife and National Parks or the Malaysian Conservation Alliance for Tigers (MYCAT) Hotline. Cruelty to and mistreatment of wildlife should be reported to the Department of Wildlife and National Parks and the state SPCA, which can then assist in investigations and lodge an official report with the Department of Veterinary Services. Any offence involving marine life should be reported to the Department of Fisheries and Marine Parks. Responsible tourism begins with you and me. It is up to us not to invest in cruelty and environmental damage and destruction. It is hoped that the culprits in the turtle harassment video and pictures will face the maximum penalties stipulated under the Wildlife Conservation Act 2010 and / or Fisheries Act 1985.

Labels: Letters to the Editor

What in the world do those people think they're doing? Have I told you about Albert the turtle who always come and visit the homestay we frequent in Mabul? He's handsome but even the homestay owner and staff have never touched him. They let him come, "talk" to him and let him go. Did I tell you that some turtles have actually landed and laid eggs in Mabul? The villagers must have done something right to be so honoured. har har har *evil laughs*

Thank you so much for your kind words of support, as always, Kitties from Sydney! The Mabul homestay owner sounds like a very compassionate and sensible person. Can we get him to train other resort owners pls?