To me, Parasite’s best quality is that it doesn’t try, as many other films do self-consciously and ostentatiously, to be an art film. It doesn’t try to be too clever, but still ends up being perfectly brilliant all the same. It just has an effortless feel about it, as if all it aspires to be is a great story. And it is one. You won’t be able to stop thinking about it for a few days after watching it.
All the characters are flawed yet likeable in their own way, from the highly-strung, self-involved Mrs. Park who is incompetent and clueless in the way only the very rich are, to the scheming and ambitious Ki-Woo with his Gatsbyish resolve to transform his dreams into reality. And all of them are victims in their own way, like Shakespeare’s characters who are more sinned against than sinning. The isolated and detached yet inoffensive Parks with their nannied, tutored, and indulged children are as much victims of capitalism as anyone else. Incapable of handling routine tasks and the vicissitudes of parenting without outsourcing the work to hired help, incapable of being forthright with the hired help out of fear of ‘losing face’, and doomed to always evaluate hired help according to whether the latter is discreet enough not to “cross the line” into familiarity and presumptuousness, the wealthy too are imprisoned by their wealth and social status. The poor who have to deal with the ignominy of urinating drunks and overflowing toilets and flooded subterranean homes are the obvious victims of capitalism, and in this category we find the close-knit Kim family whose only sin is to have the hubris not to obey and stay within their social station. 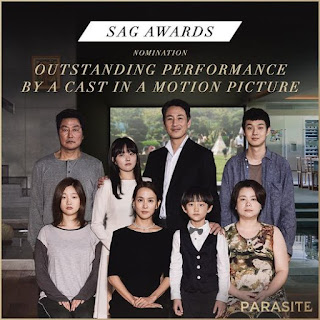 Cursed with a scholar’s rock they could neither eat nor have a use for, tainted by the smell of radishes and poverty, stoically leaving socks hung up to dry before a window through which very little sunlight or hope enters, the Kim family's desire for upward mobility eats away at them, consuming them from within like an insatiable parasite. As the movie progresses, the viewer cannot help but question who the real parasites and bottom-feeders of society are. Yet this is a movie without clearly defined heroes or villains. One of the underlying themes of the movie is the idea of ‘fitting in’, and whether the impoverished Kim family that has ingratiated its way into employment in the wealthy Park home fits into its role and the social strata its members found themselves in.
One of the factors that made this movie such a success (apart from the brilliant screenwriting and directing, I mean) is the way all the thespians fit into their characters and played their roles so credibly and convincingly. That ‘Parasite’ swept virtually all the awards at Palme D’Or, Golden Globe, BAFTA, and Oscars is definitely fitting. 5 stars out of 5! Catch ‘Parasite’ while you still can!
Posted by ~CovertOperations78~ at 09:07