Letter to the Editor: Crackdown on Wildlife Trade Sorely Needed and Appreciated 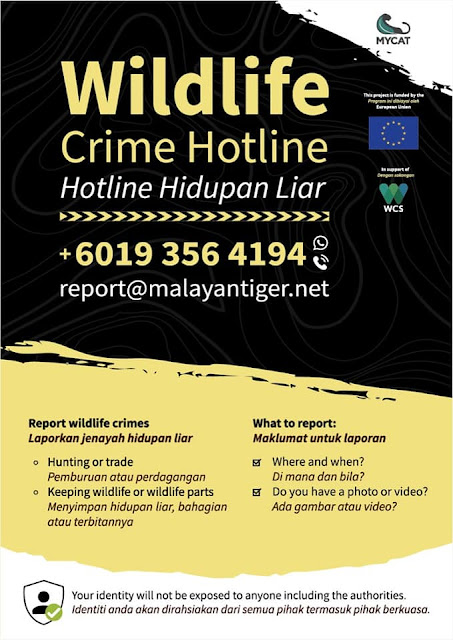 It is with relief, hope, and gratitude that environmentalists received the welcome news that Inspector-General of Police (IGP) Tan Sri Abdul Hamid Bador has directed that all District Police Chiefs will have to report on wildlife trade in their jurisdictions within a month (19 Aug 2020). This is consistent with the IGP’s earlier pledge in October 2019 to crack down hard on wildlife crimes and push for harsher penalties for those convicted of wildlife crimes.

We further commend the Royal Malaysian Police (PDRM)’s decision to revoke the firearm licenses of licence holders who are found to have engaged in the hunting of wildlife, and hope that PDRM will continue to investigate licence holders, and revoke licenses and confiscate firearms where necessary. This is not only an important move to curtail wildlife hunting and to prevent the killing of wildlife in situations where the wild animal does not pose an actual and immediate threat to human lives and safety, but also to preserve national security and reduce firearm-related accidents, injuries, and deaths.

Our IGP’s commitment to protecting Malaysia’s wildlife is applauded, as is the Department of Wildlife and National Parks of Peninsular Malaysia’s (Perhilitan) recent operations which resulted in the arrest of poachers and the timely rescue of live animals and recovery of wildlife parts and products. The public is, however, understandably concerned that many such operations succeed in the arrests only of rural and indigenous hunters and couriers and other bit-players in wildlife crime networks, while the kingpins who fuel demand and create supply in the wildlife trade manage to avoid detection and arrest. This is why recommendations such as a shoot-on-sight policy will not work – not merely because it goes against human rights and the due process of law and may lead to abuse of power and extrajudicial killings, but because it unfairly targets the pawns in wildlife trade, and may even delay or hinder the discovery and arrest of wildlife kingpins. What we need is for our enforcement agencies to work together with INTERPOL, conservation groups such as TRAFFIC Southeast Asia and MYCAT, and governmental and intergovernmental agencies to gather incriminating evidence against these ringleaders and masterminds and bring them to justice. Without the incapacitation of these wildlife trade syndicates and their leaders, there can be no effective and lasting justice for, or protection of, wildlife.

Malaysia’s wildlife species have been declining rapidly due to poaching, habitat loss, habitat fragmentation, and human-wildlife conflict. Hardly a week goes by without another news report of elephant or tapir deaths due to traffic accidents or poisoning, or tiger deaths due to poaching or as revenge for eating livestock. For years, concerned members of the public and conservation NGOs have been alerting the police and Perhilitan to the presence of pet stores, traditional medicine shops, restaurants, and online traders selling wildlife and wildlife parts, only to experience frustration and dismay when these reports did not result in arrests or consequences. Conservationists have long urged for swift and decisive action to be taken against wildlife offenders and for harsher penalties to be meted out, but progress has been slow and inconsistent. It is an open secret that VIPs and people in positions of power and influence are often involved in wildlife crimes and often get away unpunished. The ‘soft approach’ to tackling wildlife crimes has not worked. Too much resources and manpower have already been poured into education and awareness programmes, yet at the end of the day when all the posters have been painted and the prizes given out and the mascots have done song-and-dance routines in schools and shopping malls, the wildlife trade has not only continued unabated but flourished, because the financial rewards are significant, and the penalties lenient and derisory. The time for diplomacy and coercion is over, and the time for concrete action is long overdue. For too long, wildlife and environmental crimes have been perceived as being victimless, or less serious than crimes against fellow humans or property, which explains why the penalties are frequently inadequate. Today, we know this is not true. The wildlife trade is a lucrative one, and it finances and is linked to human trafficking, the drug trade, organised crime, governmental corruption, and terrorist activity. The punishment for wildlife offences must therefore be commensurate with their gravity and the damage and harm they cause to the environment, biodiversity, and human society.

There are amendments being proposed to the Wildlife Conservation Act 2010 to increase the minimum penalty for wildlife poaching to a minimum fine of RM1 million and 15 years’ imprisonment. I believe I speak for all right-thinking and responsible Malaysians when I urge all Members of Parliament to vote in favour of these harsher penalties. Any MP who votes against these proposed harsher penalties should be investigated for any possible links with the wildlife trade industry, as it is inconceivable that there could be any good reason to oppose such a proposal. A vote for a harsher sentence is therefore a vote against corruption, cruelty, and the sheer idiocy of unscientific practices such as the consumption of wild animals for their ostensible medicinal value. A vote for a harsher sentence is not only a vote for the continued survival of wild and endangered species, but a vote for a safer, better, and healthier country and planet.