Letter to the Editor: Racist Statements Cowardly, Irresponsible, and Unprofessional 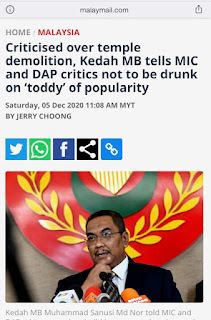 Nary a month goes by in Malaysia without a politician making a racially-charged statement and then attempting to defend or justify it. More exasperating still is how these politicians manage to get away with impunity, and how the Prime Minister and party leaders ignore or downplay the incidents.

Anyone can tell that Kedah Menteri Besar Muhammad Sanusi Mohd Nor’s crass and unfunny remarks that MIC Deputy President M Saravanan and DAP’s Deputy Penang Chief Minister II P Ramasamy are “drunk on the toddy of popularity” and “acting drunk on three bottles after consuming only one” were intended to stoke racial hatred, because they are unrelated to the issue at hand. If the MB had no intention of being racist, then the analogy of being drunk on toddy would never have been used. He knew very well that the insult would not have the same effect on people of other ethnicities. His insult was illogical and irrelevant to the issue at hand, which is as follows: Why was the Hindu temple demolished when the Kedah MB had previously given his express assurance to the Unity Minister and MIC leaders that all relevant parties would be consulted and notified before the destruction of any houses of worship? MIC’s, DAP’s, and the local Hindu communities’ assertions were that the demolition was unfair and not done according to due process, and not that they, the MIC and DAP representatives, were popular, teetotallers, or sober, so why was it necessary to invoke the topic of alcohol consumption and toddy?

A leader of calibre would be able to respond to the questions raised, demonstrate knowledge and fairness, and defend his or her decision without having to resort to personal or racial attacks and irrelevant insults. Making a racist statement is a distraction tactic. The MB knew that it would outrage his critics who are of Indian ethnicity, and at the same time it would win him support from certain segments of society who would then see him as a ‘defender of the race and faith.’ However, one cannot defend one’s race and faith by insulting other races and faiths. One can only uplift one’s race, faith, and society through good deeds and by conducting oneself with integrity and competence.

In any civilised society and in the eyes of any person with a sense of fairness and integrity, acts such as corruption, abuse of power, and violations of the human rights of minorities are far bigger crimes and sins than the consumption of alcohol. One is not by default a morally upright person merely because one does not consume alcohol. Not all non-Muslims consume alcohol, not all who consume alcohol become intoxicated, and not all who become intoxicated cause harm to others. Consuming alcohol in a social or celebratory setting is a harmless activity in many cultures around the world. To assume that someone who is not of the same race or faith as you is somehow morally inferior to you is a sign of ignorance and immaturity.

In his address to the nation in March this year, Tan Sri Muhyiddin Yassin vowed to be a “Prime Minister for all Malaysians”. Yet his silence and inaction on the recent statements of the Kedah MB as well as previous incidents, for example, that of Baling MP Abdul Azeez against Batu Kawan MP Kasthuri Patto, show that he has no plans to follow up on his vow.

Each time a politician makes an insulting statement of a racial or religious nature, there will be a short-lived outcry from the public and politicians from other parties. We will then remind the perpetrator that there are over 40 different ethnic groups in Malaysia, that we are a multiracial and multifaith society, that non-Malays also played a role in securing the Independence of the then Malaya from Britain, that non-Malays also play a significant role in nation-building, pay a disproportionately large percentage of taxes, and serve in the civil service and security forces. To dismiss and disrespect the needs and wishes of such a significant percentage of the population is arrogant, dangerous, unfair, and irresponsible. But the cycle of racist verbal abuse resumes each time accountability is demanded of particular politicians. MP Kasthuri Patto was insulted when she asked about the lack of female representation in the Parliamentary Select Committee. M Saravanan and Dr P Ramasamy were insulted when they queried the Kedah MB on the demolition of the temple. Any rational voter can see that these politicians resorted to racially-charged insults when they are not able to show accountability and respond to their political opponents’ queries. The only reason these racist statements were made was to make the persons at the receiving end feel disrespected and unwelcome. The PM and party leaders need to end their silence and complicity in this culture of systemic racism and the use of racist language and hate speech to harass ethnic minorities and political opponents, not merely because politicians and citizens from minority groups deserve better, but because you need to prove to everyone – both those from majority groups and those from minority groups – that you are capable of decency and fair play.