Letter to the Editor: Protect the Privacy of Aid Recipients 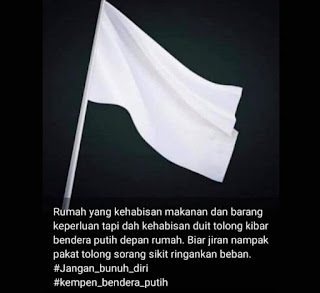 The White Flag Campaign currently trending on social media to encourage people who are adversely affected by the Movement Control Order and corresponding restrictions on economic activities to seek help should be seen not as a cause of pride, but an indictment of the government of the day for its failure to provide assistance and support to the most vulnerable members of our community.

While we commend the many individuals and businesses that have stepped forward to provide food aid and monetary relief to the less fortunate, we must remember that it is our political leaders’ preoccupation with wresting power from one another, failure to plan ahead and to manage the Covid-19 outbreak, lack of empathy, and culture of impunity that got us to the point in which 468 suicides have already taken place in Malaysia from the short period between January and May 2021. Malaysians who were optimistic, compliant, and cooperative at the start of the pandemic in March 2020 have since found themselves out of savings, lacking a safety net, and out of options.

For this reason, the White Flag Campaign cannot be a reason for cheer and pride. Being in the position to alleviate the suffering of others should not be an opportunity for individuals, NGOs, businesses, or elected representatives to brag about their generosity. In an unequal and unjust society, mitigating inequality and injustice is the right thing to do, but is not an alternative for good governance. Just because some citizens are willing to extend help to other less fortunate citizens does not give political leaders the license to go traipsing on maskless durian parties and breach Covid-19 SOPs. We need to continue to hold our political leaders to account, even while we are reaching out to those who have fallen through the cracks.

It is in the interest of holding others and oneself to account that I strongly urge donors, elected representatives, and the media not to identify or post photographs of the aid recipients. Those who put up white flags outside their homes are already humiliated enough that they have to concede defeat and acknowledge that they are unable to carry on without the kindness of strangers. There is no need to exacerbate their shame and sense of helplessness and powerlessness further by identifying them by name and posting photographs of them and their homes. There is no pride to be derived from doing the most basic and human of things for someone in greater need than oneself. Being in a position of privilege should make us humbler and reflect more on how unequal our society is.

It is sufficient to identify the aid recipients as a “single mum” or “unemployed father of four” or “struggling hawker” to give their plight a human face. There is no need to name them and post photographs of them and strip them further of their dignity. Even when the aid recipient gives express consent to having their photos taken and shared publicly, this consent is often not given freely but under economic duress. A desperate parent who truly needs the food basket for his or her children will swallow his or her pride and agree to be photographed, but this will only add to the imbalance of power and their sense of vulnerability.

Further, we sometimes do not realise the full consequences of our actions. A homeless contract worker may face repercussions or even termination at work when an employer realises that the said worker is homeless. There is still a lot of stigma attached to homelessness and some employers see it as an indication that the employee could flee after committing misconduct and will not be easily traced or tracked down, instead of merely an indication that rent and home ownership is beyond the reach of many people working in the city. An aid recipient who is working at a low-paying job may face repercussions from his employer who views the white flag as an allegation that the employer is not paying its workers enough or as an attempt to embarrass the employer. There are just so many ways in which the action of flying the white flag or asking for help could be misinterpreted or judged. Even the Kedah MB and several other politicians have interpreted the white flag as an allegation that they have failed their constituents, and some of those who flew the white flag have reported facing harassment and intimidation as a result. Identifying these individuals by name and posting their photographs can only make things worse for them.

It is understood that many donors claim that they require photographs for accountability reasons when the funds come from different sources. Sometimes, well-meaning individuals pool together their money and assign a few members of the group to purchase and deliver the food aid and money. In such a situation, there are other ways of proving that the aid has reached the recipient. Those responsible for delivery should take photos of the record of funds collected, the items purchased, and the receipts. Then they can take photos of the volunteer(s) handing the food over, and the hands of the individuals who received the aid. If photos are taken of the recipient and his/her home, the considerate and responsible thing to do would be to blur out the recipient’s face, home address plaque, vehicle registration number, and anything else that can be used to identify the recipient (e.g. work uniform, t-shirt logo, children’s school uniforms) before posting or sharing the photos. The same rules apply to elected representatives delivering aid to their constituents – those who support you will believe that you provided aid even in the absence of corroborating evidence, and those who don’t support you will claim the pictures are doctored or staged, or that the recipient is undeserving even if you post the recipient’s entire family history and photo album online. So why subject the recipient to even more humiliation and harassment?

The trouble with givers is that we like to imagine that our actions will inspire others to do the same. What we forget is that we can inspire and influence others without sharing photos and information that make the vulnerable even more vulnerable. Nobody likes to be identified as a charity case or an object of pity. If we want to uplift and help others, we need to do so in a way that respects, protects, and empowers them. If we want to create a spirit of solidarity and unity in society, we need to extend support and help to those in need without making them feel even more lacking in power, agency, and autonomy.