It hasn’t exactly been the best or most interesting of weekends. Even the fact that PAS won the Kuala Terengganu by-election did not come as a surprise. Anti-BN sentiments are still running high and this has buoyed opposition candidates to an easy victory since the March 8 elections. I see this as a positive sign that there will be better check-and-balance and greater accountability in Malaysian politics.

Initially, my plans were to attend a barbecue-yee sang-camping pre-Chinese New Year party with the 4x4 gang at the Sungai Sendat waterfall on Saturday evening, but our plans had to be called off due to the weather.

As an alternative plan, I had informed Lillian that I would be able to assist her on Frogging Night as a sweeper, as I was quite familiar with the trails at FRIM. However, my plans again fell through. The Battletank had a leak which caused the radiator to overheat. Fearing that there might have been damage to the other parts of the engine, I had to send the Battletank to the workshop for service and possible repairs in the afternoon.

I went back to the parental home in the afternoon to give Amber a bath and to clean the parental home. Covert Mum had been hankering for a musk lime plant to grace our front door for the Chinese New Year, so I took her out to town and bought her a lime plant and a pot of ornamental chillies, which made her very happy.

Back at the parental home, I tended to the Battletank and added water and motor oil. Then I started the engine and lubed the fanbelt with Nano-K. The Battletank seemed none the worse after the ordeal on the highway, and I was glad I didn’t have to pay for any expensive repairs.

Later, I cleaned out the parents’ kitchen cabinets and refrigerator and tidied the rest of the house. Then I cleaned the venetian blinds and the bedrooms. By then, it was too late to attend Frogging Night. I was uncertain if the Battletank could take the strain of another journey so soon after the last one, anyway.

The news of PAS’ victory in the Kuala Terengganu by-elections reached me by text message, which gladdened me because it is a good sign that democracy is alive and well in Malaysia.

On Sunday morning, I took Amber for a walk, dismantled and cleaned the parents’ cookerhood and did the laundry before leaving for the SPCA.

At the Indian-Muslim provision store across the street from the SPCA, I found legit milk crates for sale, which means I didn’t have to
‘borrow’ milk crates off back alleys anymore. I got to work at the Shelter and started shampooing and tick-washing the dogs in Kennel D, as Rose and another volunteer had washed the dogs in Kennels G and H earlier in the day.

My friend Pauline arrived at the shelter with her daughter Natalie while I was washing dogs. I showed them around, and then Pauline made a cash donation to the SPCA. 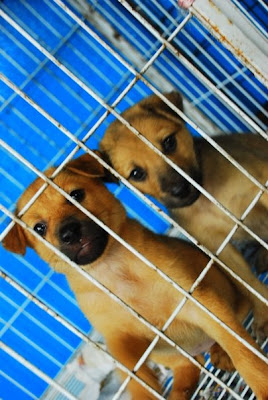 We foresee that the surrender rate will be rising due to the economic recession. We are only 18 days into 2009 and the number of surrenders so far is already 247, while only 61 animals have been adopted.

I finished washing and tick-rinsing the dogs in Kennel D and joined Dr. Lim and Thean for tea at the warong . Thean is now the Veterinary Assistant and I think he is better suited to this position than as an Inspector.

We returned to the shelter after tea and I offered to assist Dr. Lim and Thean in the Clinic. We did heartworm tests for the dogs in the kennels behind the Office and updated the medical records. We led each dog out on leash to the Clinic, took a photo of each dog using a digital camera, updated the vaccination and deworming records and weighed the dogs. We then had to record the dogs’ ages by inspecting their teeth (for signs of wearing down of the canine incisors and tartar buildup), which I seem to have been doing by intuition for much of my life. I held the dogs and gripped and extended their right forelegs so Thean could find the vein and take a blood sample to be put on a glass slide. Dr. Lim would then check the slides under the microscope for signs of heartworm larvae. Thankfully, all the tests we did came out negative. The dogs were duly given their vaccination booster shots and deworming pills and returned to their living quarters. 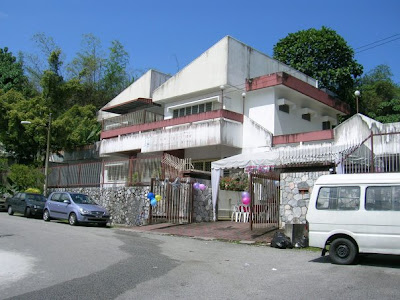 The SPCA Bungalow. Photo taken by Meem on the morning of our Christmas Paw-ty on 20th Dec 2008. See the huge old jalopy of a Nissan Vannette in the picture? I could drive that monster pretty well. 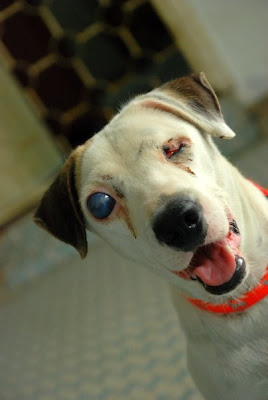 Angel, all smiles and wags despite her disabilities and her horrific history of abuse (Photo taken by MingChien Ng)

After I had showered, I doled out treats to Angel and the other dogs, and played with Meem’s fostered cat while waiting for Thean to finish work so I could buy him dinner. We walked over to Studio 5, where Thean had rice, and I had mushrooms and chips, which must be the unhealthiest vegetarian dish ever invented.

Stopped by the night market in Taman Megah on my way back to the BOQ so I could stock up on Chinese New Year confectionary. I had a Peppermint Nescafe Bubble Tea Shake that was so sweet and cloying that I almost thought that I had been given the drink concentrate by mistake.

Once home, I tidied up the BOQ, washed the Battletank, swept the floor, arranged Jake’s DVDs and junk in my recently acquired legit milk crates, and went to bed after reading poetry to the Rowdies.

It hasn’t been the most exciting of weekends but I can’t really complain.
Posted by ~CovertOperations78~ at 01:32

thanks,,,,beautiful cats & dogs. Tompok looks exactly like one of yours too !. Burger my 10 years old cat died 2 days back,,,while giving birth at her age.
Cutty the lady chicken started laying eggs about 2 weeks back, we can't find where about. Red the ChiefCock is still No.1 around the area and his brother Puteh still the cunning foxy cock. Puteh and her son Sombong is still very close bwt mother and son as compared to Browie and her 5 chicks which are same age as Sombong. Three new cocks growing up very fast indeed and are showing off their flying kicks with each other. Hope that they will corner Sombong one of these days !
Hitam the Chief Cat is peeing every where in the house as such pissing Bib like hell. Pinky the queen femail just delivered 2 kittens from the ound of it from under the staircase,,,MakCik the amar still can't confirm the numbers as yet.
The others ,,,,Cats & chickens are all resting every where cas. of the heavy non-stop rain in Sarawak.
Am back in Miri to take care of things due to potential flooding during this raining period and will fly back to KL and KT ,,,boat across to Kapas on 18th feb'09.
Chef Kalid is taking care of Capt's Longhouse with Awang.