Sun, Sand, Surf and other Distractions

On 30th December, when we were all busy with our New Year’s Eve plans, I received a text message from Mahendran to inform me that Aravind’s mother had passed away. The news of her untimely demise saddened me, and my heart went out to Aravind. Aravind and I were thick as thieves in college, and even after commencing legal practice, we would still meet up at the court cafeteria for a cuppa. I attended his mother’s wake that night after work, and was puzzled to find my buddy calm and somewhat inscrutable. At any rate, his wife and sister-in-law were looking after him and his Dad rather well, so at least that was one worry off my mind. I went out to supper with Mahendran and Irene before going back to the BOQ.

New Year’s Eve should have been a quiet affair for me as a sign of respect, but since I was still in the city anyway, I strolled over to Sunway Pyramid to watch the fireworks display at midnight. It was chaotic and messy and the crowd was rowdy. I couldn’t even hear the countdown. The only thing I liked about it was the Mardi Gras-style stilt-walkers. I knew I should have gone to the pub instead. 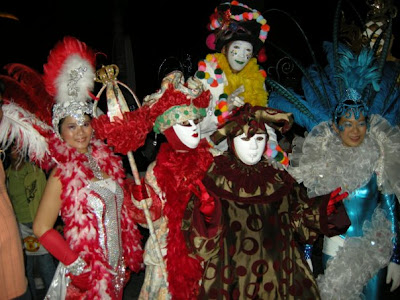 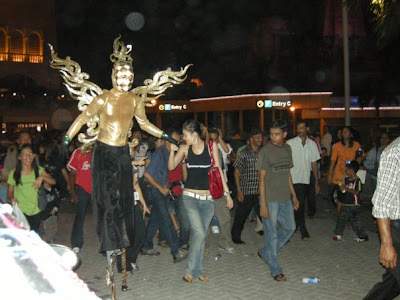 Drove up to Cherating with a couple of buddies on the morning of New Year’s Day for a 3-day beach vacation at the budget chalets.

It was still raining like the clappers when we arrived, so we proceeded to their Beach Bar for nasi dagang and drinks. A few other friend joined us later that evening, and we had a grand old time watching surf videos, listening to rock music, drinking and playing poker until the wee hours of the morning. We somehow survived the night and woke up without a hangover.

Diq was supposed to give me a lesson in surfing the following morning, but he had to take his son Didaqt to Mersing to compete in a surfing competition at short notice (Didaqt is 13 and already securing top places in the men’s category of international surfing competitions, and has secured sponsorship from Billabong). We had breakfast at Mak Bedah’s warong and met Mahmat, who relayed the message that I could borrow Diq’s other surfboard. 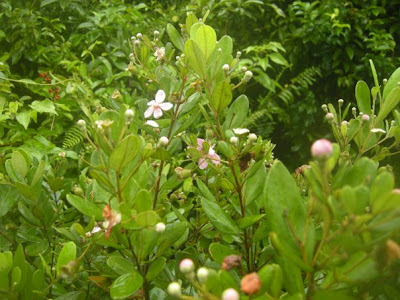 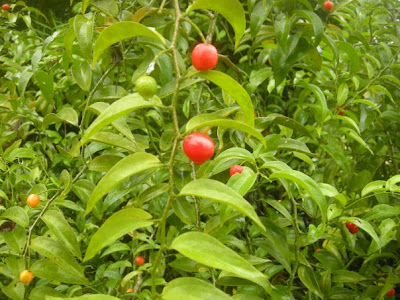 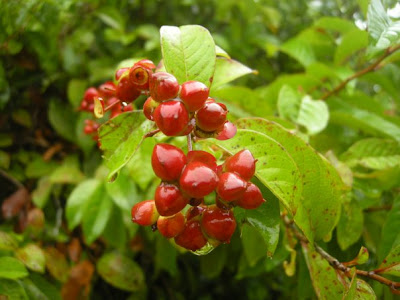 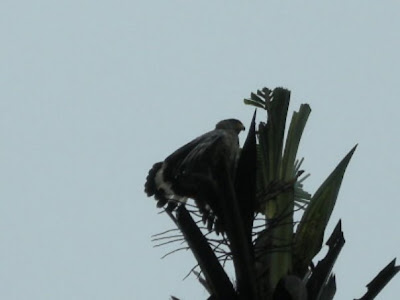 A Changeable Hawk-Eagle drying its feathers in the sun.


Although it was drizzling (as it is wont to do in the East Coast much of the year), there was no lightning and it was therefore safe to be out in the open sea. There were dozens of other surfers on the beach despite the chilly air. I watched them surf for a few minutes to see how they did it so I could teach myself to surf. I took the board out to where the waves were bigger, positioned myself on the board and practiced finding balance and steering the board. It was harder than I expected but an enjoyable challenge nevertheless. I paddled out towards the waves and waited for the big waves to come so I could learn to ride on them. I spent an entire morning teaching myself to surf in the freezing rain and foamy sea. 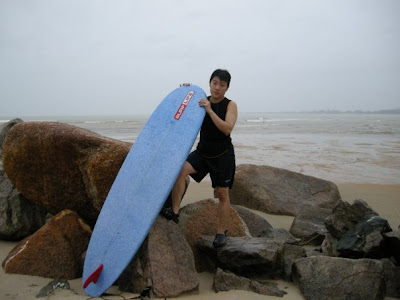 Back from riding the waves


We drove up to Kemaman for lunch and sightseeing, and then returned to the chalets to practice surfing again. At 1600 hrs, Wan turned up, as promised, to take me horseriding. Diq has sold most of the other horses off to equestrian clubs but decided to keep Apache due to his sweet and affectionate nature. The paddock was waterlogged, so we decided to take Apache to the beach instead. I had brought carrots for Apache and he nuzzled me every few minutes to ask for more carrots.

Apache enjoyed his canter at the beach, and I gradually developed the confidence to guide Apache using my knees. Once I have found my rhythm, it wasn’t tiring at all. We rode for about an hour, and then we decided to bathe Apache in the sea. A few picnickers came up to Wan requesting horse rides for a small fee, and so we obliged because we could use the cash for Apache’s food. 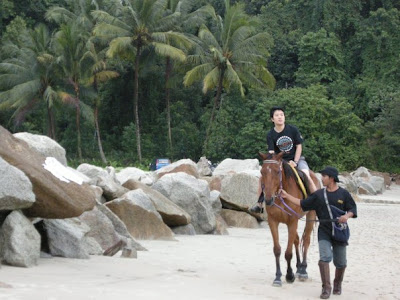 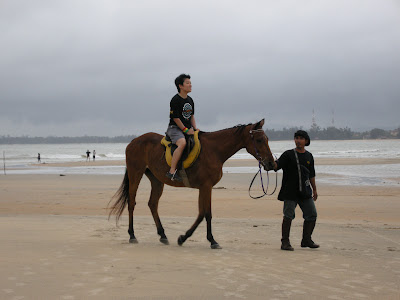 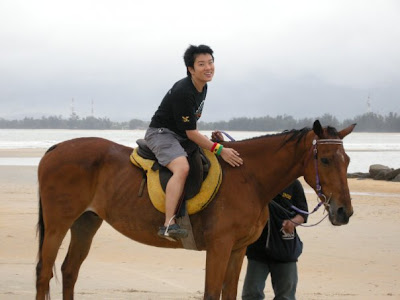 Apache and I enjoyed our canter at the beach very much.

As with the night before, we gathered at the Beach Bar after dinner and partied until the break of dawn. It doesn’t get any better than this.

Saturday morning was grey and drizzly, but that did not stop me from taking the surfboard out to sea again. I met a surfer girl who helped me with my surfing technique and helped to push my board out further so I could practice pulling my feet up and assuming the correct position. It was awesome, despite the fact that the cold rain kept getting into my eyes and obscuring my vision.

All that paddling left me understandably tired and hungry. I gave Apache more carrots before going off for lunch. Spent a few more hours at the beach before we packed up, bade everyone goodbye, gave Apache the remaining carrots and headed back to the City.

Many of the coastal villages we drove past were affected by the monsoon floods, but the people seemed to take it in their stride, as it is an annual occurrence. Children played in the floodwaters and youths took the opportunity to fish. We made a pitstop across the road from the air force base in Kuantan to buy keropok lekor before resuming our journey back to KL. It won’t be long before our next visit to Cherating. Frequent sojourns to the beach may be just what I need to break out of the ennui of urban life. 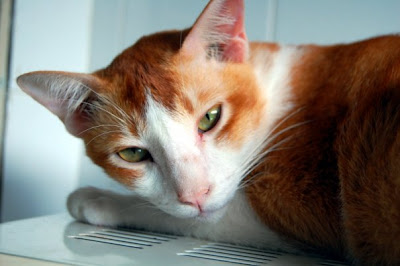 Pixie looking not very pleased about having his nap interrupted.

While cleaning the Rowdies’ ears on Thursday evening, Jake and I found a cat mite on Pixie, under his fur. This calls for another bath. On Saturday morning, I caught hold of each of the Rowdies and gave them warm baths with herbal anti-parasite shampoo. The caterwauling that went on was terrific. You could hear it all the way down the street. I was drenched and exhausted long before I got to the SPCA. Still, it was worth the trouble because the shampoo dehydrated the little bloodsuckers and made them come up to the surface of the fur to die. With my exacting standards of domestic cleanliness, I wonder how the mites came in and survived in my disinfected home in the first place.

Arrived at the SPCA after lunch to find the weather still fair. I got the rubber gloves, leashes, shampoo and tickwash ready and got to work washing the dogs in Kennels G and H. I washed the dogs, 3-by-3. Rose came to join me later and together, we managed to get 25 dogs washed and free of parasites within 2 hours. I then soaped and washed the Kennels and put away the pet-washing kit. 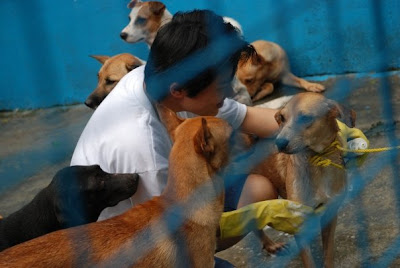 Our erstwhile Animal Inspector Thean and General Manager Dr. Lim invited me to join them at the warong for tea around 1730h. I had knowledge of Thean’s change in job designation from Animal Inspector to Veterinary Assistant, but did not see it as a demotion. Thean has higher aptitude for animal care work than for paperwork and inspectorate work. In addition, he already spends most of his time in the shelter anyway. We discussed a few issues on the running of the shelter and our surrender and adoption rates before I went back to the shelter to help Linda and Reve with the cleaning.

Reve was already scrubbing the Front Reception/Admin Area and I assisted her in removing the rubbish and putting things away. While the dogs were outside playing in the compound, I soaped and disinfected the cages and Maternity Kennels and Puppy Area. Next, I cleaned the Cattery and the huge tiled sink.

We returned the dogs to their living quarters around 1900 hours and washed the floor when the dogs were safely inside with their fresh bedding and water. I tidied my things up and walked up the slope to the Bungalow where I knew Nicole would be waiting. Felt more human after a shower and a change of clothes. Glyn and Nicole got me a lovely elephant hand towel from Bangkok and AH-64 Apache and UH-60 Blackhawk key tags. Played with the dogs and chatted with them a bit before going back to the Quarters.

Cleaned up after the Rowdies and fed them before leaving for the parental home. Spent Sunday being nagged at and picked on by the Parents as I spring-cleaned their house. Cleaned the storeroom, hauled out the garbage, cleaned the walls and turned out the towel cabinets. Bathed Amber and tick-washed Chocky. Took both Amber and Chocky out for walks, did more cleaning, and did the washing up and cleaned the kitchen after dinner. Was glad to go back to the Quarters for some peace and quiet. Washed the Battletank a little after midnight, tidied the Quarters, read a book and took half a bottle of cider to bed with me. This Chinese New Year, I am putting myself up for adoption by another household.

You look very happy after your surfing and riding at the beach. The sea makes humans glow!

Twenty five dogs bathed and parasite free in 2 hours is amazing! You should be awarded a medal for that level of efficiency!

Take a look at this website: www.langkawilassie.org.my. Seems to me like they are making money under the disguise of animal welfare. I hope I'm wrong.

Dear ZR, Langkawi Lassie is operated by the managers/proprietors of BonTon Resort, Pantai Cenang. They are bona fide and are doing a great job -- better than SPCA Selangor in some respects! They even have their own Island Animal Hospital to deal with injured animals, etc. I volunteered with Lassie during a trip to Langkawi in 2005/2006. It is a good place to raise animals.

Can you write me? patzplaze@gmail.com

Another busy week I see. Surfing looks fun! But 25 dogs in 2 hours. How did you do that? It takes me 10 minutes to wash a cat!

your cat might get its ticks while pawing the ground after shitting around the garden area. There will always be ticks in the garden area unless you kill all the parasite there too.
you are invited to capt's longhouse to help do all the clean up too-lah. My dog, Jane would need a shampoo too.

CO'78,
You are really the outdoor kind.
Did you get your tickets? Heard from Mussadixx that he had been selling tickets by fon. Your group must be among those who bought them.