Almost 2 weeks of working from home and the restlessness is building up. I just can’t seem to get enough work to do and the assignments are not coming to me as fast as I am completing them. I have updated my CV and will be sending it out to suitable prospective employers if such opportunity arises, in the event freelancing for just one paymaster isn’t providing me with the financial security I need.

Perhaps my impatience and irritability could also be attributed to the state of things in the country right now. Parliament is in session again, and imbeciles of all political persuasions have been rearing their ugly heads. PAS was considering ‘unity’ talks with UMNO, which of course, means only Muslim unity to the exclusion of all other faith groups. So where does this leave all of us non-Muslims who have worked so hard in the nation-building process? Since June is the month of World Environment Day, there is also enough greenwashing going on in the mass media to repaint the entire country with, while the illegal wildlife trade is doing a roaring business and our islands and marine parks are suffocating in trash and sewage. I just don’t know if there are any sides left to be on anymore.

I cannot deny that it feels awesome to be able to sleep as much as I need, work the hours I want and carry out my volunteer work or community projects on weekdays and do my (paid) work at night if I so choose to.

Due to my family’s various commitments on Sunday, we decided to celebrate Fathers’ Day on Saturday instead of Sunday, with a home-cooked dinner. I spent Saturday cleaning the parental home, spring cleaning the spare rooms, tending to Amber’s needs and helping out in the garden. 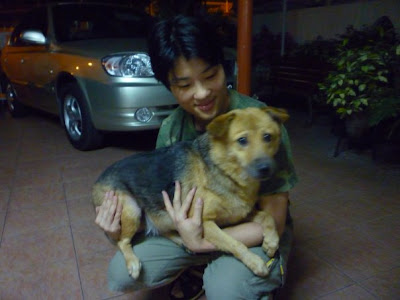 Amber looking worried about having her photo taken. 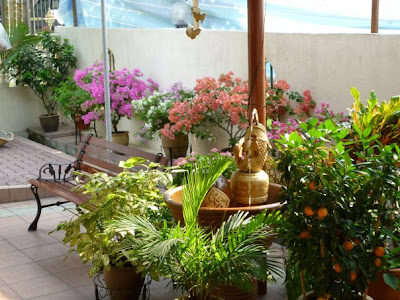 My parents’ colourful and flower-filled porch. 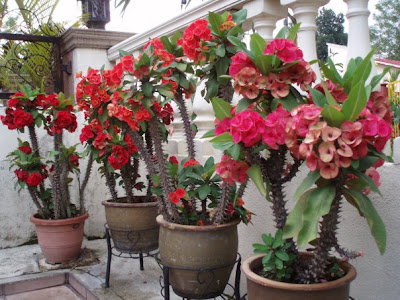 I was up and out of the house by daybreak on Sunday, as I had promised to conduct a Photo Scavenger Hunt at the Kota Damansara Community Forest in conjunction with the AMP-Wild Asia Tree Party. I have always been very passionate about sharing nature with others, and I hoped that by organising outreach activities for the local community, it would increase their appreciation of and for our wild spaces and green lungs. I hope the people of Kota Damansara realise how privileged they are to have a suburban forest (now finally re-gazetted as a forest reserve) in their midst.

As most outreach activities are typically targeted at children or special interest groups (such as photographers, birders and cyclists), I try to develop outreach programmes that are suitable for the general adult public. A photo scavenger hunt is perfect for novice photographers and tenderfoots whose natural history knowledge is not sufficiently wide to enable them to participate fully in more challenging nature activities. In addition, there is always a conservation awareness section to the activities I organise, and for this particular photo scavenger hunt, I had set the requirement that teams had to list energy, water and resource conservation measures upon having correctly identified and photographed the clues listed in their Hunt Sheet.

I parked along the side of the road upon my arrival and lugged the heavy box of prizes (goodie bags of organic products) to the event grounds. A Girl Scout came up to me and helped me carry my things. 2 other Scouts from the local school helped with the registration of participants while I briefed my volunteer Hunt Marshalls for the day. I had a powwow with my friends from other environmental NGOs while waiting for the participants to be corralled.

We flagged off the Photo Scavenger Hunt at 1130 hrs, and boldly the participants ventured into the trails in search of the items they believed answered the rhyming riddles I had drafted. The first team, consisting of Emily and Mike, returned within half an hour, gabbled off their proposed conservation measures and were placed first. The other teams were not as efficient, and I had a snack while waiting for their return.

I finally got to announce the winners and hand out their prizes almost an hour later, after the capoeira performance, and there were cheers and applause all around. There was a little appreciation ceremony after that wherein the organisers gave out tokens of appreciation to their sponsors, exhibitors and partner organisations, and I represented both MNS and Green Living to receive the gifts. 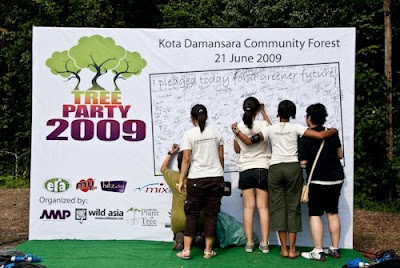 Visitors and volunteers signing the Pledge Board. 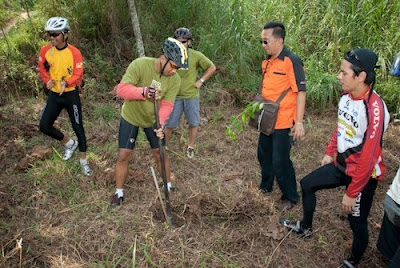 A tree-planting activity going on somewhere along the trail. 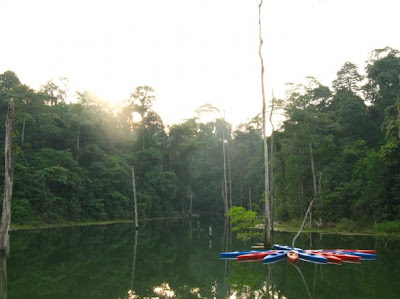 Kayaks on the lake, before the arrival of the kayakers.

I had initially planned on going to the SPCA for my weekly 5 hours of volunteering after the Tree Party, but it was late in the afternoon when I was done, and I was tired and parched from being out in the sun for too long, so I decided to go to the SPCA some other day during the week.

Went back to the BOQ, showered, asked Jess if she wanted Swedish food as badly as I did, went out again to Ikea for Daim cake, and stopped by the night market for fresh food to last us the week. Spent the rest of the night tidying and cleaning the BOQ, translating a proposal paper as a favour for a fellow volunteer and doing a product review of the Bio-Home Dishwashing Liquid for Terra-Cin’s blog.

I am glad that going to work on Monday for me now means walking all the way from my bedroom to the computer workstation in the dining room sometime at midmorning. It’s not bad, this brand new life.

Organic products are essentially earth-friendly, sustainable and natural, not only in its entity but in production mode. Which makes safer and healthier.

Lynn, have a Sheridans with crushed ice on me.

Major, thanks but it's not much fun drinking alone when everyone's away at work!

Is that so Lynn? Then it looks like I have had not much fun!

Hi ~Covert_Operations'78, you seem to have so much energy, so in this period of lull, it's natural to feel restless. Also, not knowing what's coming up next.
Keep looking for a good opening. In the meantime,go easy on yourself. Hope this is helpful :)

HUGE-ass hugggg for you, for feeling like you should be doing more, but aren't!

And that explains the early, early comments on my posts, too :)

Once you get into the swing of things, you'll do ok. You've been so used to a regimented life - wake/work/home - that this flexibility is perplexing.

But when more work comes in, and more know of your services, you'll find that you need to maintain strict 'office hours' - or you'll find your bum glued to your chair all day, with no time to eat, or anything else!!!

Believe me, I know. I've worked from home lah! Sigh.

Which brings me to this: game for coming with me, Larnee and William to the elephant sanctuary sometime in July? ;)

Dear Major, Sheridans with crushed ice should never be imbibed alone. The last time I was left alone with the drinks, I was so wasted they had to take me to the hospital. That was in 2004.

Dear Keats, yes, thank you, that is good advice indeed, and I am trying to relax and take things one day at a time but I am so full of nervous energy that I am bouncing off the walls and spring cleaning the house at 0400h!

Dear Pat, thanks, my good friend! Work has finally started to flow in, rather than just trickle in, and I am so stoked! I still have too much nervous energy, though. Been wearing a patch off the floor practicing breakdance moves at 0230hrs. YES PLEASE to Kuala Gandah! Will bring my parents. We must call to book early cos they only give out 50 stickers a day. Those without stickers can't ride or swim with the ellies. I've been there 4 times already and am not tired of it yet. I have MNS events to conduct on 11th, 18th and 25th July, though. Any other dates would be fine (so far!) Muchas Gracias!

Have sent you email. Hope the job market looks up - before you go bonkers!

Thanks very much, Ellen! Job market is fine! It's just that the lady I was liaising with is in the late stages of pregnancy and always on medical leave. Perfectly understandable and forgivable. Now they have put me in contact with her subordinate, who will make sure I get my assignments and cheques in time. Thank goodness!