Went back to the parental home in Rawang on Saturday morning after collecting Magic Mutt Balls from Meem for Amber and Chocky. The air quality in the Klang Valley is deteriorating, but in typical political doublespeak, the Director-General of the Department of Environment made the official pronouncement that “it may look hazy, but there is no haze in Malaysia at the moment”.

The Air Pollution Index reveals the current level to be 131, which is dangerously unhealthy, but of course, according to our bureaucrats, if it is ‘merely’ ground level ozone, it doesn’t count as ‘haze’ and it is therefore acceptable for us to carry on coughing, wheezing and itching. If this is classified as “hazy but not haze”, I just am glad that the haze is not back!

I spent Saturday cleaning the parental home and giving Amber and Chocky their baths. Chocky is beginning to be a little easier to handle on walks. It used to be that he would ruin my reputation as a dog lover each time I took him out for walks because I would be telling him off the whole time: “Look out! Mind the car!” “No fighting! Heel, boy, heel!” “Drop it! Open your mouth and drop that!”. Although Chocky is still nowhere near as manageable and compliant as Amber, at least taking him out for walks is no longer as excruciating as it used to be.

I left the house by 0700h on Sunday morning to set up our MNS Green Living booth at FRIM (Forest Research Institute Malaysia) in conjunction with The Star’s World Environment Day celebrations. Pasu and the rest of the Nature Guides were already there registering participants for the Keruing Trail Walk when I arrived.

I must say that the event was quite a disappointment this year in terms of vendor/environmental group participation and visitor turnout, compared to the previous years. It seems like we (MNS) were the only non-governmental organisation to participate in the event this year. Of course, The Star’s youth group, BRATS, had their own little activity booth, but they were only selling balloon sculptures and popcorn in plastic cups, so I didn’t see what relevance it had with World Environment Day. It was just another opportunity for the appropriately named BRATS to sell refreshments, play games and have fun. There wasn’t a single element of environmental activism in what they were doing. In fact, there wasn’t anything remotely related to environmental conservation in most of the booths. Most were just merchants trying to pitch the sales of their purportedly ‘green’ products, like novelty water bottles and cellular phones. 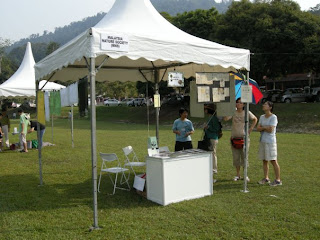 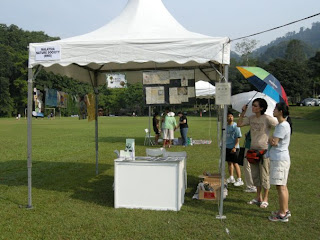 Attending to visitors at the Green Living booth.

I attended to the visitors at our booth, answered the usual inquiries about everything from balcony composting to household appliances, sold most of the pre-loved books and played a few rounds of the 3R Game and Water Conservation Board Game with youngsters who didn’t have any companion to play against. Teck Wyn dropped by with little Cerys and we had a chat about finding a successor for the position of Green Living Coordinator so I could move on to the branch Committee to focus more on advocacy, corporate liaison, and media relations work for the MNS. 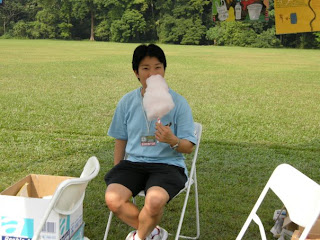 Having a sugar fix during a rare quiet moment at the booth. Sigh. And I had wondered why my teeth are in the horrible state they are in!

Finally decided to call it a day by 1400h and started tidying up the booth. Bade goodbye to the Nature Guides, (who similarly complained that the visitors were only here for a good time and were not in the least interested in conservation. The Keruing Trail was quite ‘rubbishy’ by afternoon, so I guess all the lessons on protecting Mother Nature was lost on these folks) and drove over to the SPCA. I put the remaining books from the Green Living booth up for sale in the SPCA Charity Shop and tidied the shop a bit.

Later, I joined Rose and Wonder Boy (I still don’t know the youngster’s name but I recognise him as a dedicated volunteer) to wash and groom the dogs from the kennels next to the Hospital. We finished grooming about 6 dogs and washed dozens others. I swept up the hair clippings, soaped and disinfected the Cattery and the area behind the office and cleaned the Front Office Reception/Admin area. Decided to clear off by 1800h as I had been up since 0630h and was exhausted.

Cleaned myself up and drove back to the BOQ. Tidied up the place, fed the Rowdies, grabbed my cloth carrier bags and reusable food takeaway containers and walked over to the night market in SS25 to stock up on snacks and fresh produce. Walked home, cleaned the BOQ and sorted out Green Living property before hitting the sack. It’s been another reasonably good weekend.

As agreed earlier, Jess and I decided to take Jake out for dinner on the eve of his birthday. As the 9th was also Chloe’s 5th Gotcha Day, I gave all the Rowdies Addiction Organic King Salmon and Potato before we left for Chili’s in One Utama. 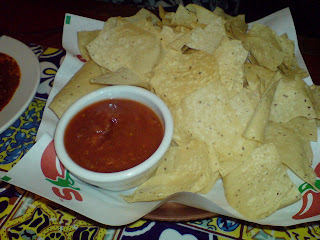 
Somehow the conversation veered from work, politics and the state of the economy and environment to a disclosure of all the terrible pranks we played in our schooldays. My best memories of school are always that of delinquency.

Our food arrived and met our expectations, as usual. We had bottomless tostada chips, Triple Play, bottomless fruit juices, cheeseburger (for Jake) and grilled Portobello chicken (for Jess), and the bill was still lower than what I paid at Jake’s Charbroiled Steaks the previous week, and we still had leftovers to doggie-bag.

We left by 2300h without having imbibed any alcoholic beverages as Jake had a midnight shift to attend to. We had a good dinner and a good weeknight, by any standards.

When I first joined this firm, I had ambitions of excelling at my work and of succeeding. Within days, I learned that the work culture and range of work was completely at odds with my objectives and principles. I could take the long work hours, but I could not condone many other things. Had I been younger, I would have stuck my chin out and persevered at a horrible job because by quitting I would be “letting them win”.

As I grew older, I realised that some struggles are just not worth it. Even if I were to stick it out with this job, would it be worth my effort? Would it bring me any closer to any of my life’s goals? Once I have finalised Plan A and Plan B, tendering my resignation became the easiest thing to do. Resigning, as I have learned, is not about admitting defeat. It could also be about evolution, growth and positive change.

And so I tendered my letter of resignation and served my 30-day notice period. On my final day of work, I submitted my detailed status, billing and client contact reports and handed over the files to the associates who would have to take over my files. The partner-in-charge made a suitably ingratiating comment about how I was getting good at shipping work and what a pity it was that I had to go. I expressed my thanks politely and stated categorically that producing the results I did for the shipping files I handled could be attributed to nothing more than hard work and very long hours. I was not, by any stretch of the imagination, actually good at shipping law. I did not tell her that there was nothing I liked about the shipping industry. It is a nasty, polluting industry which benefits only the rich and corrupt few. I merely delivered the results I did because it was my duty to do so.

Mun Yee and gang took me out to lunch, and we spent an enjoyable hour having Vietnamese food at the Pavilion. I was packed and ready to go by 2030h. Mun Yee helped to carry my box of books to the Battletank, and we slapped each other’s shoulders goodbye. I informed her that I would be going to purchase groceries for Brian’s charities on the way home, and she gave me some cash to contribute towards the purchase of the groceries. I cannot adequately express gratitude for a friend like Mun Yee. She has been such a great buddy from the day we first met at football practice.

Swung by Bangsar on my way home, picked up breakfast foods for the 5 new charities that Brian was collecting for, delivered the goods to Brian (almost tripped over his very quiet dog Loki in the garage) and went home.

If they sit in ivory towers, what touches them?? Just get real with the people. We are too choked up already!!

Sounds like World Environment Day could have been much better. Oops, I wasn't there myself. Could it be that being school hols, other attractions were pulling stronger?? Well done to you and all the ardent supporters.

You're are as bubbly and as energised as ever. You never seem to tire. Battery apa you pakai?

And I love the photo of that big girl tucking in her sugar-fix..waah..yang itu nampaknya ada orang tak mahu share langsung..yummy! All mine..

There is no haze. really? So why can't I see the horrible nasty apartments across the murky sludge puddle we call "the river"?

Hope the next job is what you're looking for. Calling Meem today and will call you later :-)

Hello again, Keats! Yes, World Environment Day could have been much better, but Malaysians think something isn't a celebration unless there are balloons, goodie bags and lots of packaging and waste. I'm so tired of children asking me for prizes as soon as they complete a board game at my booth. It's a game, for God's sake. You play it because it is fun, and because it teaches you something important. Kids nowadays need prizes as incentives just to play a game.

Datin Mamasita, thank you for visiting, as usual! Battery taking longer to recharge ever since I hit the big 3-0. I used to think that 'fatigue' was something that happened only to other people! I must cut down on the sugar intake, though.

Ellen, my friend! Yes, there is no haze and Zambry is the rightful MB of Perak and our newspapers tell only the truth and everything is perfect and trouble-free in Malaysia! I have no job as yet and it is scaring me. I may have quit too soon. Someone assured me that a contract was being prepared but I haven't got a return call from her yet.