Jellybeans in the Sky!

The euphoria of Raptor Watch Weekend is gradually wearing off, and we now have the MNS Selangor Branch Open Day on June 5 to work towards. Only volunteers can so cheerfully work like Spartan soldiers in pursuit of nothing more than smiles and warm thank-yous.

The Monday after Raptor Watch, I brought Gypsy home from the SPCA, where I had boarded him with Kak Mazni. Gypsy has not been adopted yet but there is good news. My buddies VJ and Sara fell in love with Gypsy after I posted photos of him on Facebook, and will be adopting him next week. We will get him vaccinated and formalise the arrangement by paying the adoption fee and signing the papers. I am really thrilled and grateful that Gypsy will be going to such a good home, and I will still get to board him for my friends from time-to-time. 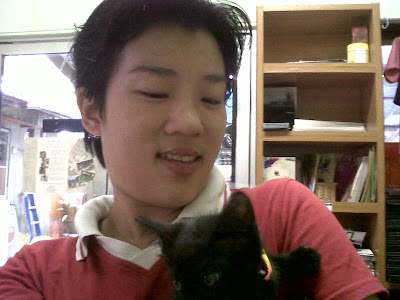 Gypsy cuddling up to me at the SPCA office. Self-portrait taken with my 'Berry.

A pleasant surprise awaited me on Saturday when I arrived at the SPCA. I had rendered a very minor favour for a fellow blogger, Emily, and had forgotten all about it. Obviously she didn't, because she had dropped by at the SPCA the week before when I was in Tanjung Tuan for Raptor Watch and had made some contributions to the shelter and left an angpow for me. It came as a surprise, and of course I was very grateful and a tad embarrassed because I had done hardly anything to deserve it. I decided to put some of the money to good use purchasing treats for the shelter animals that I bathe or administer medical treatment to, to make the task easier for me and more pleasant for the animals. This way, Emily's good deed gets paid forward.

There was a new volunteer at the SPCA by the name of Bella and she immediately offered to bathe the dogs with me when she saw me preparing the gloves, leashes, shampoo and Tacktik EC. We worked companionably together, bathing and tickwashing all the dogs in Kennels G and H and the Central Area. Some of the dogs had wounds and rashes, no doubt aggravated by the ridiculous heat and humidity that we've been enduring the past few weeks, and I used the medication in my Animal First Aid Kit to render treatment.

We were done by 1500h and I cleaned and disinfected the Cattery before I got ready to leave the SPCA early to take Nicole and the interns to the International Hot Air Balloon Festival in Putrajaya.

I showered at the SPCA Bungalow and chatted with Shahrul and Jacinta about our next projects and campaigns before going down to the stalls for a quick meal with Nicole, Cunera and Shahrul.

For the record, I know that hot air balloons are a highly fuel-intensive mode of transportation and not energy efficient at all, but I figured that they weren't going to be a regular mode of transportation for anyone, and besides, the Hot Air Balloon Festival was going to be there at Putrajaya once a year whether we choose to support it or not. Carpooling in my compressed natural gas-powered Battletank to the venue made economic and environmental sense, and so off we went to gape at balloons like any youngster would.

We drove off in the Battletank in the maddening afternoon heat in the general direction of the Federal Territory of Putrajaya, as I was unsure of the way and relied on Nic to navigate. We knew we were in the right place when we faced a traffic jam so massive we thought a parking lot had materialised in the middle of a 4-lane highway. We parked along the side of the Putrajaya Bridge, as did many other drivers, and ran shouting and pointing at the hot air balloons that drifted lazily in the sun-scorched sky.

"They look like jellybeans in the sky!" exclaimed Nicole, and I liked her metaphor so much that I decided to use it for the rest of the day. 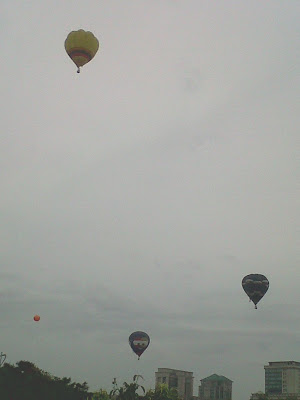 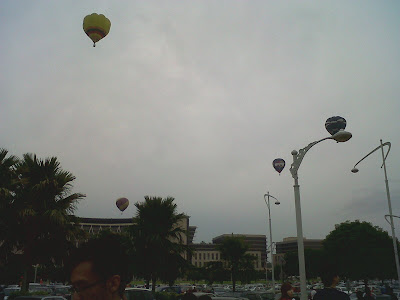 Jellybeans in the sky! Photos taken using my 'Berry. 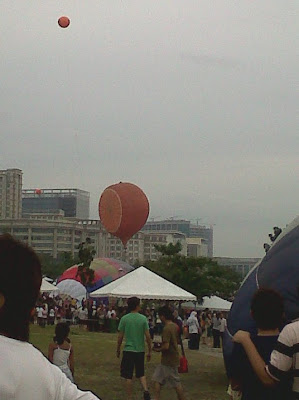 A clockwork orange? No, this one is powered by hot air! Seems appropriate then that the balloon festival is held in Putrajaya -- there's no shortage of hot air from our legislators there! Photo taken using my 'Berry. 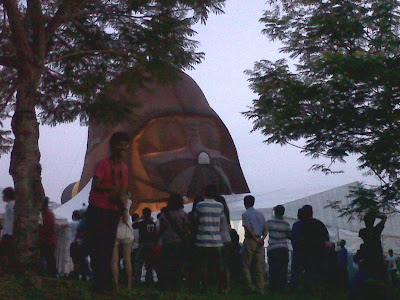 "Come with me to the Dark Side!", this Darth Vader balloon seemed to say, as it rose up from the ground as if by magic. Photo taken using my 'Berry. 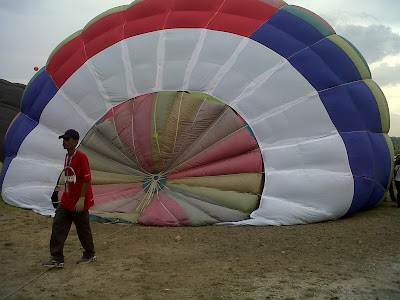 Hey, the hot air balloon isn’t an enclosed structure! The hot air escapes from the top! How does the balloon fill up and lift off, then? My guess is that it takes a continuous stream of fuel to keep a balloon aloft! Photo taken using my 'Berry. 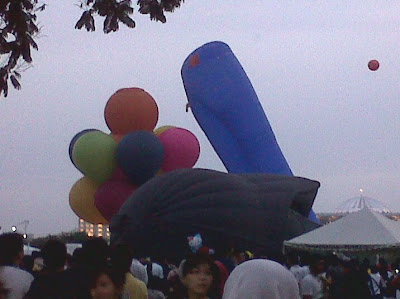 A pair of jeans, a bunch of balloons and the Darth Vader. This combination seems to have been issued by a Random Balloon Generator! Photo taken using my 'Berry.


Nic and I managed to meet up with our friends, Catarina (our SPCA intern from Portugal) and Rajib (a MAKNA intern from Bangladesh) and proceeded to run up the ramp to the Millennium Tower for better photo opportunities. 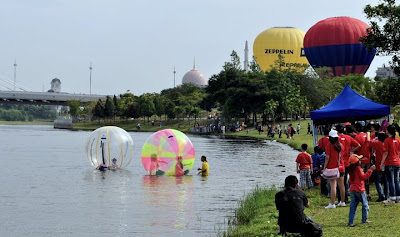 Water Zorbs and other carnival-style attractions at the event grounds in Precint 2, Putrajaya. Photo courtesy of M. Rajibul Hasan. 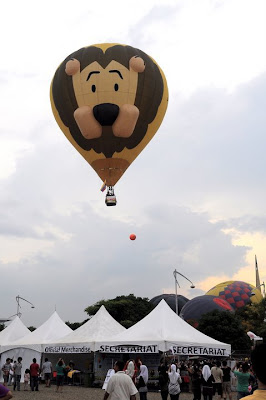 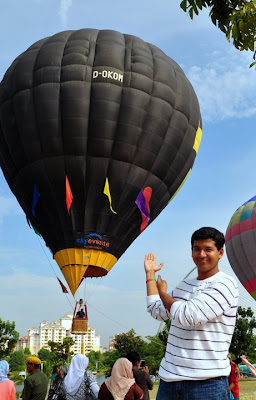 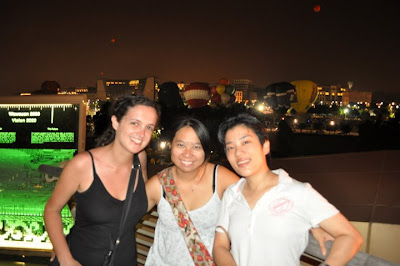 Catarina, Nicole and I waiting at the Millenium Tower for the Night Glow to begin. Photo courtesy of M. Rajibul Hasan. 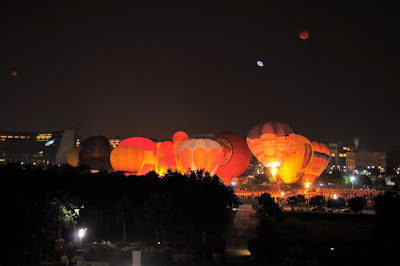 Night Glow -- Can you think of a more enchanting sight? Photo courtesy of M. Rajibul Hasan. 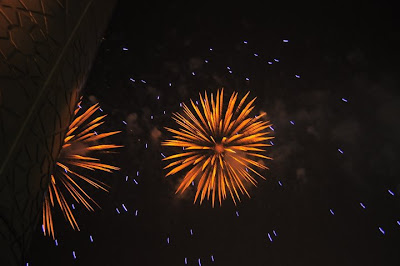 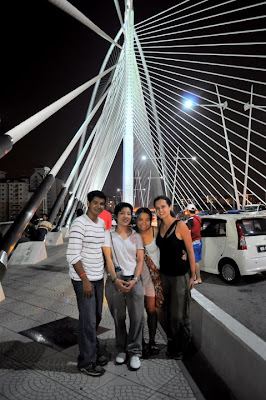 A group shot for posterity -- Rajib, me, Nicole and Catarina on the Putrajaya Bridge.

We went back to Ampang Jaya to have dinner at the stalls. Rajib and I saw Catarina and Nicole off at the SPCA Bungalow. I dropped Rajib off at his apartment after declining supper at Gandhi's on grounds of being too full but assured him that we would meet up sometime for good Indian food.

So ends another charmed weekend of volunteering and spending time with friends, made all the more magical by jellybeans in the sky.
Posted by ~CovertOperations78~ at 03:47

CO78,
So glad to hear good news of Gypsy!!! May he'll live happily ever after with his new family. You know, it's not just good food ad medication that makes an ill kitten bounce back quickly. It's the TLC that you shower on him...
Oh, do you think those people would allow me to board one of the balloons? Hmmmm....I'm curious. purrr....meow!

this year was my first time to the fiesta (was not aware about the previous one), it's was good except for the queue which was veryyy longggg...probably for next year we'll be there before 5 am ....

Dear Kitties-in-Sydney,
Thank you for your support for Gypsy, he feels it all the way from here! He will get plenty of TLC too with his new parents. They are crazy about him already.
As for the balloons, I keep thinking my kitties would like one of those baskets. The hot air balloon baskets are all made of reinforced cane and wicker! Just the thing my kitties love to scratch! They would make short work of it!

Dear Rizal @ Jalan Rebung,
Thank you for dropping by! I didn't attend the Festival last year either. This year's Festival seems to be on a much grander scale! Next year it's going to be crazy. We will have to fly in on helicopters. There will be no space for anyone to move around in. We will have to bring our own potty, diapers, food, water, everything.

Jellybeans? I love them when I can get my hands on them!! Sure has a great fiesta mood . Did anyone fly a banner that says ' Fly Me To the Moon'?? Right, sing along too, everyone!!

Thanks for coming by, Keats! I love jellybeans as well. What a treat! As you can probably tell, my friends are jellybean fans too, which explains the metaphor! Goodies in the sky!

"Fly Me To The Moon", would be an appropriate soundtrack to the event. Also, "Come Fly With Me".

See you on Sunday!

Hehe I love the metaphor, "jellybeans in the sky." Very cute.

Congratulations on finding an adoptive home for Gypsy!

Colleen, how good of you to drop by!!! SQUEEE! I still can't get access to your friends-only blogposts, though. The last one I saw was the Jake Gyllenhall one. Come chill with me in Malaysia!!! I miss our chats!

Great news about Gypsy! I just knew someone would fall in love with him :)

Dem jellybeans-in-d-sky were something else. Especially at night. And fireworks!!! I am just a baby inside - haven't 'grown up' yet!

I'm glad you dropped by, Pat! I wouldn't want you to miss the jellybeans for the world! The fireworks were great, too! When we lay down on our backs to watch the great big fireworks expanding across the vast night sky, we felt like we were in outer space!

Thank you for being happy for little Gypsy. He is a wee mini panther, only fluffier and sweeter-natured.

Must try a balloon trip next year!

Good to have you back, Emily! Yes, do come for the Hot Air Balloon Festival if you can stand the crowds! I think next year I will go there and sell cold drinks out of an icebox in my car and make a killing!