13th & 14th March 2010 marked the 11th Raptor Watch Weekend organised and conducted by the Malaysian Nature Society (MNS), and the 10th Raptor Watch of which I am a participant.

Raptor Watch is now one of the biggest ecotourism events in the country, and the key to its success is a well-designed combination of entertainment, public education and conservation initiatives.

How do we reconcile putting more cars on the road to meet a conservation goal? Can there ever be sufficient justification for fossil fuel-based travel? My take on this is YES.

In the end, people can only feel protective over what they are acquainted with and what they love. If it were not for the effort of MNS volunteers and activists 10 - 11 years ago in getting the general Malaysian population passionate about the issue of bird migration, important bird areas and wildlife habitats, the Tanjung Tuan Forest Reserve would have been bulldozed in the 1990s to make way for wilderness-style resorts and chalets.

A natural-history approach to travel helps generate publicity for worthy causes, income for local communities and support for conservation initiatives. If it weren't for the number of people who have been awed, humbled and moved by the phenomena of raptor migration, the birds of prey would have lost a critical resting place in their perilous journey back to their nesting grounds.

For the past 3 years, I have been volunteering for Raptor Watch mostly as the Coordinator of the Green Living booth. This year, as Lillian is away on maternity leave and Cindy has been appointed the Coordinator of the Green Living SIG, I am free to do what I love best -- public speaking. I had offered to be on the Raptor Watch committee and had cheerfully assumed 3 roles this year, namely:

1. As the emcee;
2. To set up, manage and guide new volunteers to operate the Green Living booth;
3. To organise, conduct and train volunteers to assist in the Raptor Watch Fun Challenge, a treasure-hunt-cum-Eco-IQ-test that I designed to replace the Lighthouse Run.

The photos below attest to the wonderful weekend we had as Raptor Watch volunteers. Although the turnout this year was not as good as last year's, we saw some improvements made this year, which included the setting up of a water refilling station (to eliminate the need for disposable drinking water bottles), the availability of vegetarian food and a marked reduction in waste generated as a whole. I will be there at the Event Post Mortem to provide feedback on what had gone right with the event, and what areas need improvement. And I trust my comments, as always, will be viewed as being fair, objective and constructive. 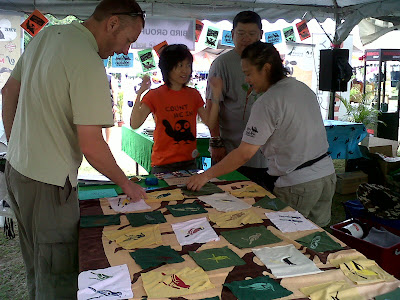 My buddies John S., Pikwun and Carol attending to the Bird Stencilling activity at the MNS Bird Group’s activity booth. The Bird Group managed to recruit many new participants for the MY Garden Birdwatch Project that weekend. 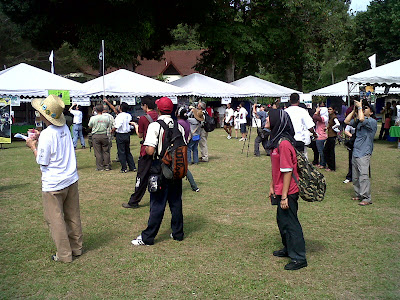 The excitement at the event grounds was palpable when the raptors started coming in on thermals over Ilham Resort on Saturday morning. 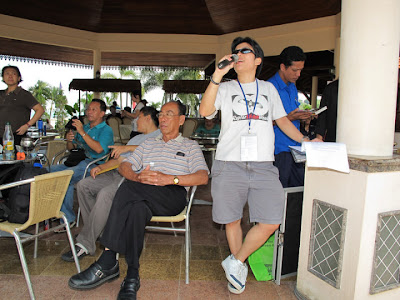 Here I am announcing the arrival of the raptors and giving basic pointers on how to identify birds. 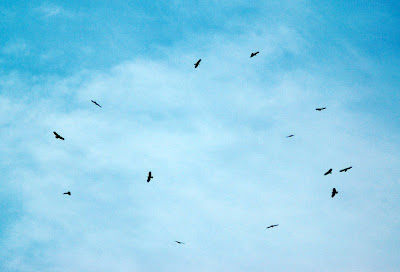 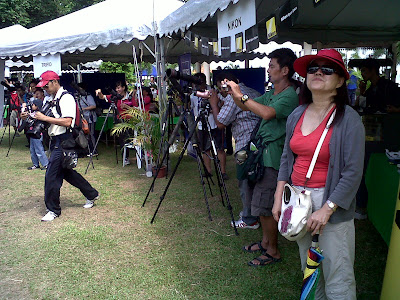 When your binoculars aren’t powerful enough to spot distant birds, it’s time to gravitate towards the digiscopes at the Nikon booth. 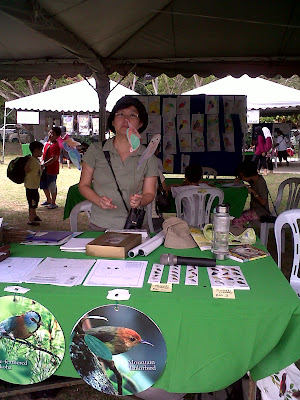 Do-It-Yourself simple bird crafts at the booth of the Wild Bird Club of the Philippines. 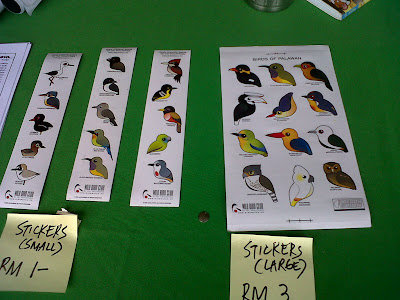 Squeee! Adorable stickers featuring Philippine birds, both common and endemic, at the booth of the Wild Bird Club. 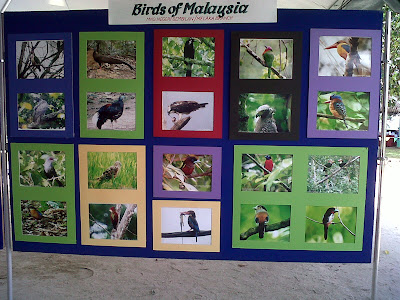 A photographic display on the common birds of Malaysian parks and gardens. How many have you spotted in their natural environment? 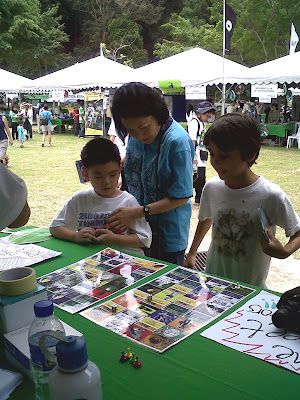 A young family tries its hand at the Raptor Migration Board Game. 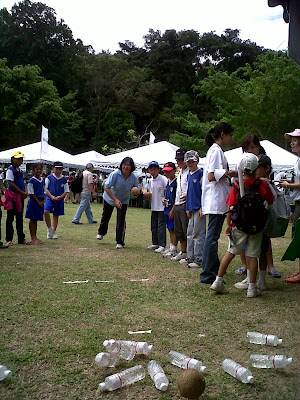 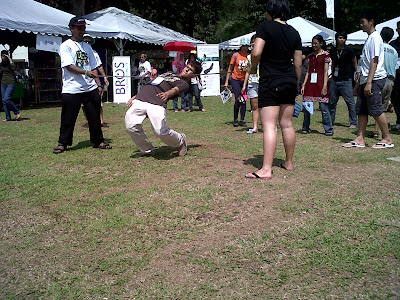 Limbo rockers galore! How lo-o-o-ow can you go? 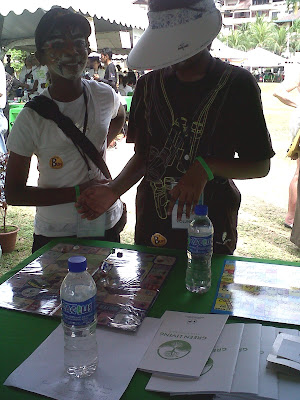 Veshalini and Tushalini play the Water Conservation Board Game at our Green Living activity booth. 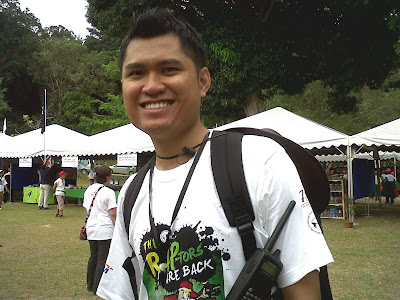 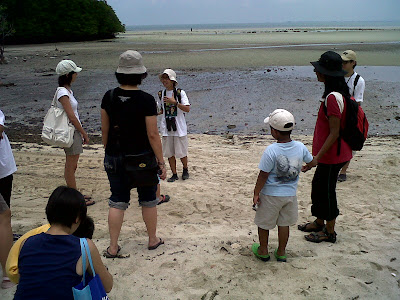 My buddy Cindy leads her participants on a Seashore Walk. 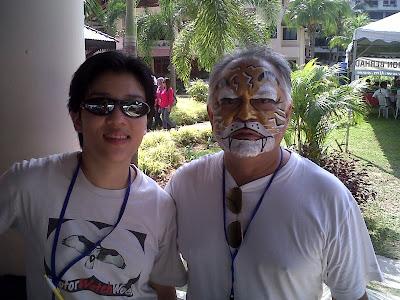 My buddy Captain Azmi and me. He does look fearsome with his painted face, doesn’t he? 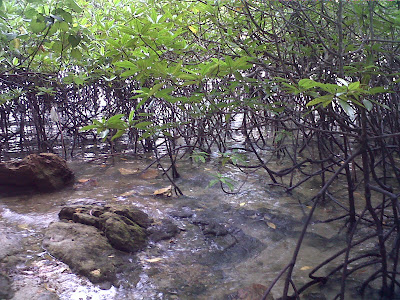 Rhizophora in the coastal mangrove forest. See how their stilt roots allow the trees to respire even in high tide. 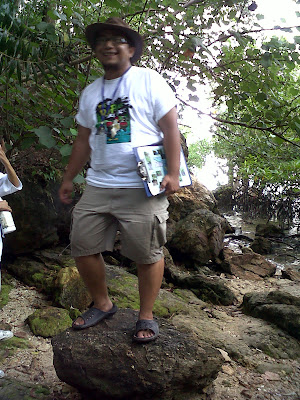 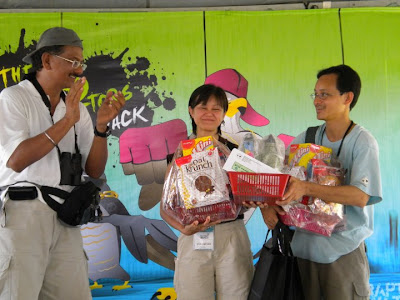 My buddies Mary Therese and Vegan Eugene came in second in the Raptor Watch Fun Challenge. I had prepared 10 rhyming riddles on items from nature that could be found in Tanjung Tuan. Participants had to solve the riddles, take photographs of the items they believe are alluded to in the riddles and complete 3 eco-challenges. 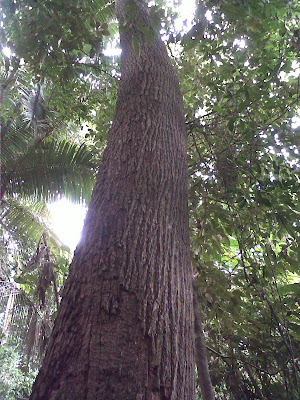 Meranti Tembaga (Shorea leprosula) trees in the Tanjung Tuan Forest Reserve.
The Shorea leprosula is a valuable rainforest hardwood in the Dipterocarpaeceae family. The resin from the Shorea is also used in the making of incense, essential oils and ointment for the treatment of skin conditions. 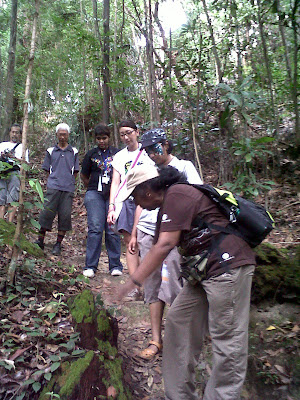 Pasupathy conducts the final Forest Walk of the day for the benefit of volunteers who were too busy over the weekend and did not have the opportunity to go on the walks. Here we are looking at the various stages of decomposition in a rotten log. 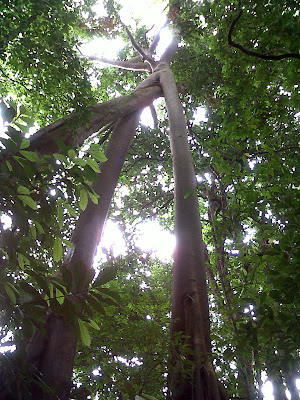 An unusual sight -- 3 trees appear to be intertwined at the top. What has happened here is that a parasitic ficus plant has sent out its roots from the top of the host tree and has overtaken the host tree in size and height. The dying host tree is the one on the left.

Although ficus plants have chlorophyll and make their own food, they are considered parasites because they compete with host trees for sunlight and nutrients. 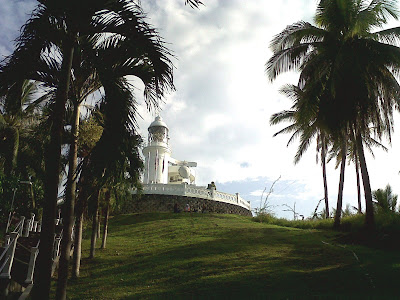 The Cape Rachado Lighthouse is the country's oldest lighthouse, with a history allegedly dating back to the 16th century during the Portuguese rule. The current structure was constructed in 1863, during Melaka's status as a British-ruled Straits Settlement. As the lighthouse is enclosed within a protected forest reserve, it has become an ideal location for birdwatching. 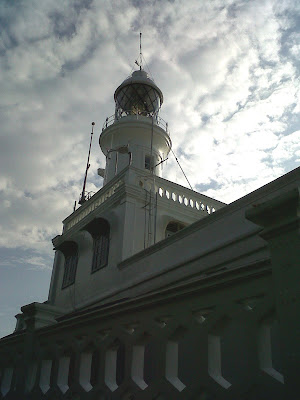 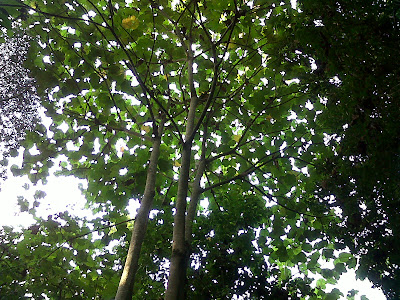 The dimming evening light seen through the leaves of the Macaranga plant at the Tanjung Tuan Forest Reserve.

The Macaranga gigantea (Local name: Mahang Telinga Gajah) is a recoloniser that grows in secondary growths and cleared land. All Macaranga plants are hosts to ant colonies. The ants and the plants have a symbiotic relationship in that the Macaranga provides the ants with nutrients and nesting space, while the ants clip away at creepers, climbers and other invasive plant species that may threaten the Macaranga's survival. If ants and plants can get along, why can't we? 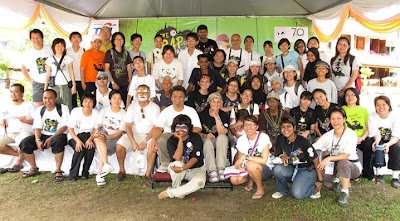 Group photo of the volunteers on Sunday evening.

The raptors came, eh? I couldn't see any in the skies outside my door - and I wondered if they'd got your invitation for Raptor Watch 2010! ;)

I'll be there next year. And I want to go on a Nature Walk, if it's on. I'd love to know what I'm seeing when I am in the midst of it. I love walking in the trees!

CO78,
Meow! Would love to chase them birds around. oops...you wouldn't let me? Then I'll chase you instead. And everyone will be pointing their binoculars at us...aaahhhh...what a sight. purrr....meow!

Yes, the Raptors came and were made to feel very welcome, and Tg. Tuan is lovely, as always! Where else can you get mangroves, the beach, the rainforest and the hills all within shouting distance of one another? Sorry you didn't come to the event grounds. Next time I'll take you on a guided walk of the forest reserve!

For some reason, I knew you were going to say that! You wanted to chase the birds! Ha ha ha! Go ahead and try it, when they land and you see they are the size of geese (well, almost!), you'll come running to me with your tail puffed up to the size of a feather duster!

Caught you in action! Well done -all for the feathered and other nature friends of ours. Good to have said 'hello' to Bernie and Mr Foo too. Keep the MNS flag and the birds soaring high!

Thank you for dropping by at the event and here on my blog, dear Keats! So glad to see you and your family there. Did you go on the forest walks? Hope to see you at more MNS events in future!

Those raptors soaring in a circle seem to be giving a choreographed performance. Glad that it didn't go unseen and unappreciated, thanks to your photo and narrative.

What a unique picture of that ficus!

Connected to your awesome blog thru louis's. I do admire your dedication and hopefully one day I can join you in your volunteering activities. Keep it the good work bro.

Thank you for dropping by! The raptors soaring in the thermals were a spectacular sight indeed! Some dipped quite low, obviously they didn't see us as a threat to them.

That ficus tree looked quite anthropomorphic. Ancient and indigenous communities would probably have worshipped it as a deity or woodland spirit.

I see your comments quite often in Pak Idrus and Louis' blogs but we haven't made contact until now.

Thank you for your support, and I do hope you will come and volunteer or at least participate in our activities sometime! MNS organises activities to suit all tastes and interests!