SPCA’s “Take A Leash” Campaign and other news 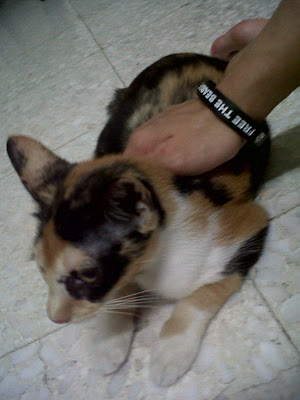 Hello! I am Jewel and I am 6 months old now!

6 months ago, an associate brought a tiny calico kitten to me. Although she had the means to care for more than one cat, this associate, H., thought it would be more convenient to just dump strays on me so she wouldn't have to go through the heartache and anxiety of caring for a vulnerable young animal.

It was then that I decided that despite my motto of "Service Before Self", I could not keep on allowing myself to be imposed on this way by those with the resources and means to care for strays they found. After one month, I firmly shifted the responsibility of caring for Jewel the kitten back to H and provided her with assistance without allowing her to take me for granted.

I provided H with a pet carrier, milk, vitamins, a scratching post and other feline necessities. I offered to handle the vaccination and neutering aspects of Jewel's care. And so H took over the care of little Jewel, and not surprisingly, decided to keep Jewel.

3 months ago, I boarded Jewel after taking her to the vet for vaccination and deworming and was satisfied with her health and progress. This week, a grown-up Jewel came back to me for her spaying appointment. She is such a beauty now, and very friendly and playful too. I must say H did quite a fine job. 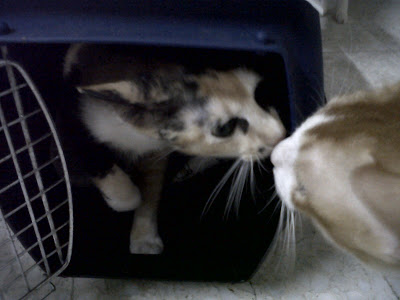 Jewel is greeted by her old pal Pixie upon returning from surgery.

Jewel would like to thank everybody for their concern for her when she was a tiny motherless waif. 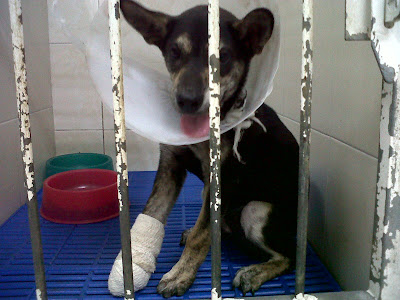 Received a call from Vegan Eugene on Saturday morning just as I was leaving my bachelor pad to attend an SPCA event. He had found a puppy with serious forelimb injuries at the roadside at Batu Caves. Vegan Eugene wasn't ready to condemn the poor puppy to euthanasia, so he called me for a second opinion. We decided unanimously to bring the puppy to Healing Pets Animal Clinic for treatment and worry about the raising the funds and finding the puppy a home later.

Being the Drama Queen that he is, Vegan Eugene told me that the puppy's leg was on the verge of falling off and had to be amputated. I had agonised all weekend over how I was going to rehome a 3-legged dog. On Tuesday, 6th April, I paid Rocky the Puppy a visit at the vet and was surprised to find his leg intact. Rocky's injuries weren't so bad after all and his leg did not have to be amputated. Vegan Eugene, you silly boy, you gave me such a fright when you described Rocky's injuries. Dr. Steven informed me that it would heal perfectly in time.

Now, our next step would be to raise funds to pay not only for Rocky's treatment and boarding, but also his subsequent deworming, vaccination and neutering, to make it easier for Rocky to be rehomed. I believe that for every animal whose suffering we have come across, his or her future well-being becomes our responsibility. If we want to extend help, then we must do it right. But Vegan Eugene and I couldn't do it without the help of our family and friends, so we will send out an appeal soon for funds (which will, as usual, be fully accounted for) the way Audrey Q and I did with Toby. I've sold all the books and CDs I had to sell to raise funds for Project Second Chance, and short of having a slave auction (Hey, I am good at washing cars and doing yard work!) I can't think of other ways to raise sufficient funds in a week or two or until Rocky's discharge. If 50% of our friends gave RM10 each towards the veterinary bills, we would have more than
enough to ensure Rocky's recovery and well-being.

So hang in there, Little Rocky, help is on its way. I am glad Vegan Eugene decided that you were worth rescuing. We won't let you down, Little Guy.

To raise awareness on the importance of adopting from pounds and shelters, SPCA Selangor and advertising agency Y&R and sponsors Purina and One Utama Shopping Centre embarked on an adoption campaign called "Take A Leash, Give A Life" at the One Utama shopping centre over the weekend of 3rd & 4th April. SPCA Selangor set up a booth to sell merchandise, counsel potential adopters and collect signatures for the "Animals Matter to Me" UDAW Petition. I dropped by the booth to see how they were doing and to ask my buddies out to lunch on my way to the SPCA shelter. 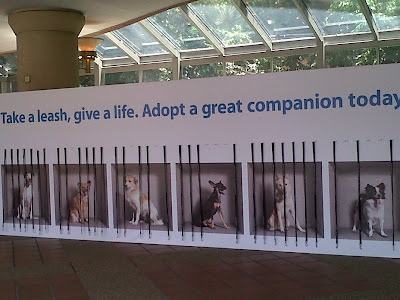 The unique 30-feet long billboard has images of caged non-pedigree dogs on it. Visitors are encouraged to take a leash from the billboard, thus pledging their support for adopting from shelters and pounds, and hence remove the 'bars' from the cages and set the dogs free into good homes. It's a creative and endearing concept, isn't it? 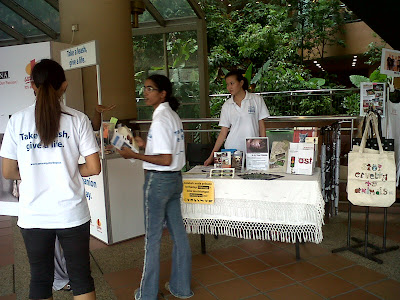 Our interns and volunteers manning the booth at the One Utama shopping centre. A few animal-welfare themed games and activities had also been organised. 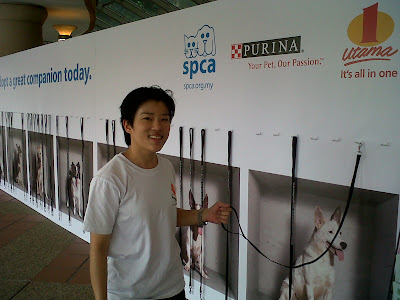 I was invited to take a leash for Amber, as both Amber and Chocky are shelter adoptees.

Jacinta, our intern Amelia, vet student Yee Ching and volunteer Lynette and I later had lunch at Secret Recipe, as it has vegetarian options. I had to get going after lunch so I could get to the shelter in time to bathe the dogs, but my buddies Lynette, Jacinta and Nicole wanted me to stay at the booth. I had to express my regrets that I could not stay, as I think my services at the shelter are needed more.

I arrived at the shelter to find only Reve and Muniandy still at work, and got to work immediately. There were a few dogs in the Central Area with matted hair, so I gave them haircuts before bathing and tickwashing them. Only then did I begin cleaning the kennels and Cattery. I cleaned out and disinfected the cat baskets and litter trays and used eye and ear drops from my Animal First Aid Kit on the cats in the Cattery. There was a litter of blind kittens who were doing really poorly, and I knew that they would probably be put to sleep by the following day. I opened up a can of wet food for them, as a last meal, and sat down on the Cattery floor and prayed for them. I know I don't have the capacity to look after them, and that they would not have much of a quality of life anyway, not merely because they were blind but because they are so sickly, so I did the Transference of Merit pooja for them as it was the least I could do.

I finished cleaning the Cattery, stroked each kitten goodbye and exited hastily so that the cats would not have to see me cry.

Next, I cleaned the cages, kennels, hospital, maternity kennels and front office/reception area, decluttering and disinfecting all surfaces as I worked. Reve helped me take out the trash and put away the donated newspapers. A surprise awaited me in the Maternity Kennels when a dog I had hitherto assumed was spayed greeted me with her brood of puppies. I hope her puppies will find good homes. Puppies generally have better chances of adoption. 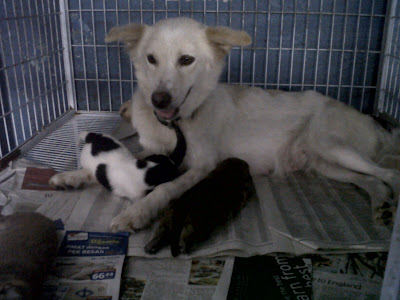 I showered, changed and had a coffee with Reve after we were done cleaning and locking up the shelter before going back to my bachelor pad. I ran some errands and cleaned up after the cats and had dinner at a food court so I could watch Chelsea trash Manchester United before going back to the parental home for a Sunday's worth of cleaning the parental home and bathing the dogs. Life is, for the most part, good. 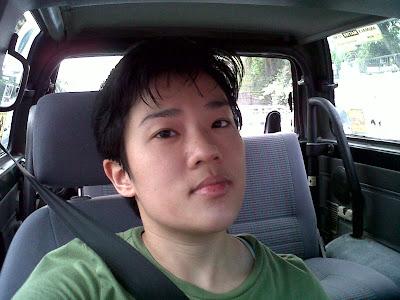 Another busy week, Ee Lynn! Will call you to meet up soon. Still got your Rock!!!

Jewel is lovely. And I so like that pix of her kissing Pixie :)

I'll be going through my stuff before we move, and as we plan for a Spartan-ish look for the new home, I'll have stuff to offer you: books, pretty little things, and lots more, I'm sure.

I was so glad to read that Rocky's leg didn't need amputating. He is such a handsome boy, I'm sure he'll be snapped up soon!

I agree about it being easier to home puppies than grown dogs. But some people don't realise that pups grow up! And that they need to be trained. That's why there are so many dogs in the pound in the first place :(

Thanks, Ellen! Gosh, I really need to come over soon to pick up my copy of the book and Amber's rock portrait! Why do we keep putting off things like this? I've given my existing copy of your book to another cat-loving friend while waiting for my signed copy from you!

Thanks for coming by and sending out your love vibes to my furry ones! They feel your love, they really do!

I pray and hope Rocky can find a home too. He will make a full recovery so I hope it won't be too hard, what with everyone moving into apartments these days.

Yes, puppies grow into dogs. Please help us tell this to the retards who bring St Bernards and Huskies to the SPCA for surrender and tell us they can't keep their poor doggies in their apartment anymore cos the dogs are now big. Gee, you think?

CO78,
Glad to know that Jewel is now well and has "come of age" (Mama's PC term for spaying)...
Wish we have your energy for everything...if you come over, we'll make you a nice pumpkin dish, OK? purrr...meow!

Thank you for your kind words for my furry family! You do have my energy, kitties, you just don't have my size and strength cos I am 20 times your size, ha ha ha, you cute kitties!

Pumpkin sounds delicious! Please give your Mama a warm thank you from me for the kind thoughts! Awaiting my special pumpkin dish now! ;)

You certainly had a busy time. Always bursting with energy and passion in your work. Kudos! I like the creative ad and will check it out when I get the chance.

Keats, you're back from Kota Kinabalu already? How was your holiday? Hope it was great! Thanks for coming by! The animals are doing well thanks to everyone's support.