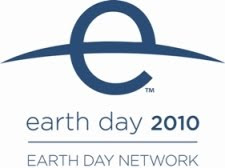 Another Earth Day has come and gone. This Earth Day, let us all resolve to make action and advocacy, and not mere protest, our strategy for environmental justice. Let us not merely carry our own cloth shopping bags or have shorter showers, but also lobby all stakeholders including corporations and governments to implement environmentally-sound policies and develop scientific and technological solutions to environmental problems. As consumers, we vote every day with our money. We should therefore be visible and vocal about our concern for wildlife, natural resources and the natural world.

In 1989, world governments made a decision to phase out or ban the use and production of chloroflourocarbons (CFCs) due to growing concern over the depletion of the ozone layer. Despite cynicism over the implementation and effectiveness of the ban, 20 years on, we can observe that the ban has been effective, that better, cleaner alternatives have been found or developed, and that the ozone layer has benefitted from the ban.

The CFC ban success story is not and should not be an isolated incident. It CAN be repeated -- with greenhouse gases, environmental hazards, coal-fired power plants, plastic bags, disposable packaging and water and energy-intensive industries. We can do it! We can influence industries and governments to look for alternatives that need not halt economic progress but will not burden our Planet's resources and ability to heal Herself either. Personal action is not a substitute for political change. But we can change our attitudes and habits, and when we do so, we change the world around us -- and our collective decisions and actions are capable of ending environmental crises without compromising the quality of life of human populations.

For we are not solitary individuals struggling in a hostile and meaningless world (much as I love Sartre and Kierkegaard!). We are citizens of a beautiful Planet and our lives and destinies are intertwined with that of our Planet. The turning point is nigh. It begins with each of us, and it is happening now. Let us be the difference we want to see.

My fosteree under Project Second Chance, Gypsy (now renamed 'Estel', meaning 'hope', after Aragorn's secret name which was revealed in Return of the King, if my memory serves me correctly), was officially adopted by my dear friends VJ and Saravananan, after making a full recovery from roundworm, giardia and eye infection -- all common bugbears of stray kittens and puppies.

VJ and Sara brought Estel home on April 14, the night of Tamil New Year. And what a lovely gift she must be -- little Estel did not take long to grow attached to her new Mum and Dad at all. VJ and Sara were kind enough to share the photos below with me. 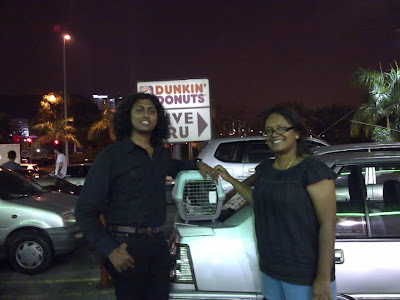 VJ and Sara with the latest addition to their family, Estel. What a lucky kitty Estel is to find such a good home! 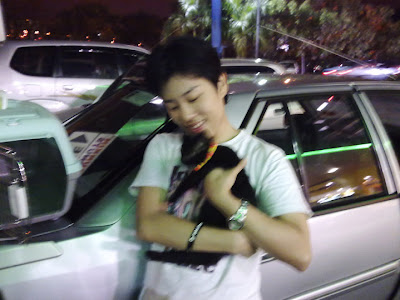 I bade goodbye to my beautiful baby. Bye bye, my love. I will never forget you, but I pray you forget me soon, so you can learn to love your new Mum and Dad with all your heart. 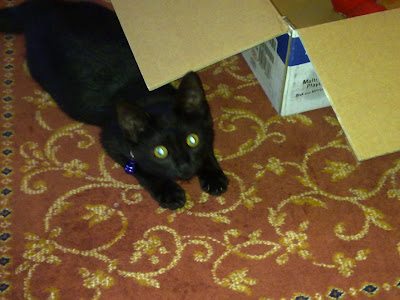 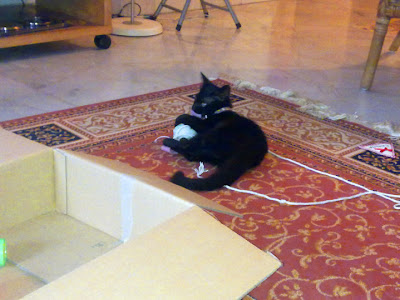 All day long it's play, play, play. What a happy kitty Estel is!

Thanks to everyone's support, financial assistance and loving thoughts, Rocky's recovery has been nothing short of amazing. Dr. Steven allowed us to take Rocky home on Sunday, 25th April. Here are photos taken on 20th April, when I went to visit him at the vet's boarding kennels in the evening. 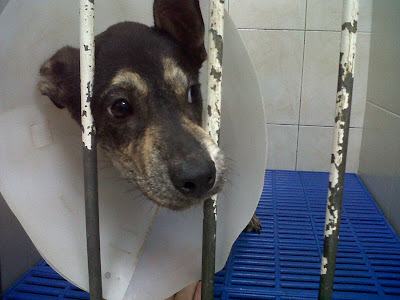 "Hello, have you come to take me home?" 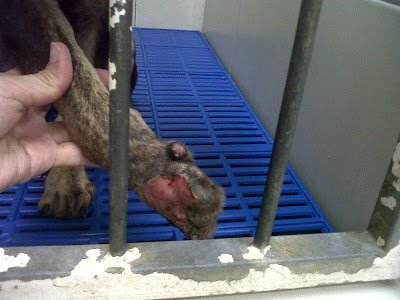 Rocky will probably not be able to stand square on all four paws ever again, but at least he did not have to have a limb amputated. 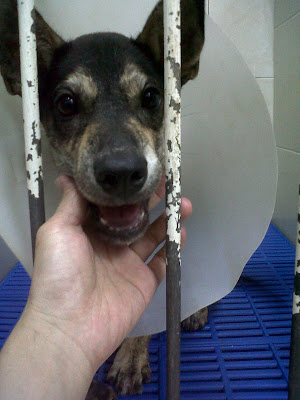 "Please take me home with you!"

Despite initially planning on going to the KL International School's Earth Day celebrations on Saturday morning to lend support to Serina and the children of Kelab Alami Tanjung Kupang for their dugong conservation fundraiser, I ended up sleeping in due to fatigue and the fact that I have been on antibiotics since the day of my dental surgery. Serina was as kind and understanding as ever, and it offered me some consolation that the children were having a wonderful time even without my presence anyway. It is good to know that I was not missed.

Earth Day and World Environment Day were previously observance days that meant chiefly one thing to me: No rest for the wicked. Requests for Green Living talks, workshops, interviews and activities would flood the MNS-Green Living mailbox weeks in advance. I am gratified that now the work can be delegated among competent volunteers and speakers. We do have some good orators in the Malaysian Nature Society volunteer pool, and their passion for environmental protection makes them assets to the organisation. I am pleased with Cindy's stamina as the current Green Living coordinator and hope that more volunteers would come forward to offer their expertise and assistance.

I turned up at the SPCA at noon, feeling considerably refreshed, and discussed a few upcoming campaigns with the officers and vets before proceeding with animal care and shelter work. The unveiling of the Melaka state government's plans to set up a biotechnology animal-testing facility in Melaka as a joint venture with an Indian firm has gotten all of us up in arms, and I felt there was so much we could do both as individuals and as an organisation.

I went up to the SPCA Bungalow to borrow a dog cage to house Rocky in. It took me an hour to dismantle and disinfect one of the large dog cages, an interminably long time indeed for someone who works at the speed and pace that I do. To make things worse, the screws and nuts that I put in my jeans pocket fell out of a hole in my pocket that had hitherto went unnoticed. Oh joy. I do not think Vegan Eugene would enjoy having to superglue pieces of the cage together. My best bet would be to pick up spare ones from the hardware store on my way home.

Went back to the shelter to bathe and tickwash the at-large dogs in the Central area. The weather was fine and it did not take the dogs long to dry, especially since they were allowed the run of the gated area.

Reve and I started cleaning the shelter around 1700h. I soaped, scrubbed and disinfected the Reception/Office/Front Areas, the puppy kennels, the maternity kennels and the Cattery. Although I have been told that my time would be better spent on policy and advocacy work, I need to do hands-on work to keep that connection between me and my animals strong. There is nothing ignoble about kennel cleaning. It benefits the animals directly and contributes to their health and safety. In addition, I need the exercise, the opportunity to use up my abundant nervous energy and the chance to take a break from constant cerebral calisthenics.

I finished cleaning the shelter and left Reve to lock up on her own as I needed to shower and change at the Bungalow. Jacinta, Moses, Nicole and I had made plans to attend the Mega Earth Day Night Open-Air Concert at the Kota Damansara Community Forest. I was also to meet up with my friends Alicia and Yenn, while Nicole was to meet up with her friend Prakash, at the said event. What a sense of community it gave us to gather under the stars and sing along with the performers!

The turnout for the event was highly impressive, and it was great to see the number of visitors and revellers who brought their own mats, cloth shopping bags and washable food and beverage containers to the event. The quality of the performances was exceptional, and truthfully, unexpected. I had expected a motley assembly of amateurs and schoolchildren, and was blown away by highly professional renditions of environment-themed songs by the likes of the Philharmonic Society of Selangor, Tree Theatre Group, Ray Chiang, Janet Lee, Nicole-Ann Thomas and Zainal Abidin. What wonderful performances they gave! And what a spirited and supportive crowd we were! I managed to capture a few poor-quality photos for posterity on my cellphone to remember the event by: 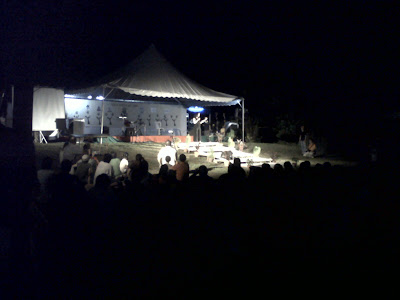 The field was packed with people sitting on picnic mats on the grass by the time we arrived. 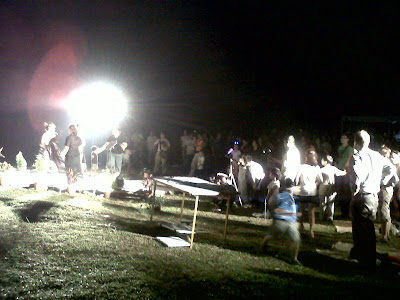 Part of the sporting and supportive crowd. 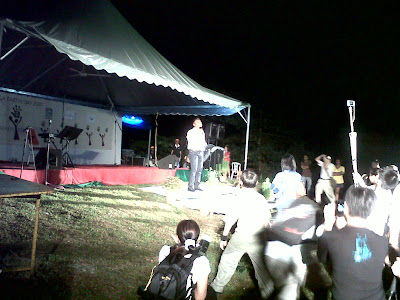 Zainal Abidin makes his appearance and we all sang along to the classic green anthem, "Hijau"

Mad Props to the organising committee of the Mega Earth Day Carnival for hosting and coordinating such a successful awareness-raising campaign! May the event bring together like-minded individuals to do more in the interests of environmental protection and conservation!
\
Posted by ~CovertOperations78~ at 03:49

Thank you for coming by, dear Kitties-in-Sydney, and a very happy Earth Day to you and yours! Estel looking Spanish -- what a quaint and cute idea! Part of her appeal is her fuzzy 'terkejut' hair -- makes her look cheeky and eccentric! But as she grows older she looks like just another 'kucing bulu kembang'. Love her so much! Thanks for looking out for her, Kitties!

Good to read of such efforts to educate people about the need to care about the environment. We still have too many "know nothings" who think there's no evidence to support claims such as climate change or the greenhouse effect.

Success on your efforts.

Thank you for your support, as always, dear Louis. I find it exasperating that people debate the existence, cause and effects of climate change as though it were a matter of faith. "I don't believe in climate change", they aver, as though discussing Santa Claus or the Tooth Fairy. Whether or not climate change is reversible, the governments of the world cannot deny that waste management, energy production, fuel use, depletion of resources, deforestation, natural disasters, deserfication of once arable land, are all issues that need to be dealt with urgently because they all affect human survival.

Oooo, Estel is a beauty, isn't she?

Thank you for coming by despite your busy schedule, Pat! I trust you are enjoying life with Chuan in your beach home now. As for Estel, yes, her large eyes and fluffy unruly hair makes her look constantly surprised!

Hey! I thought my comment was in but...
Good news all round - Estel, Rocky and the Green concert. How about painting yourselves green and dance to the beat of HiJAU.LOL! Education is KEY!

Many thanks for your encouraging words, Keats! During Raptor Watch 2010, when the performer sang "Hijau", some of my volunteers draped themselves in a green tablecloth and ran around the booths, lion-dance fashion! That sure was funny! Music is a good way of reaching out to people and evoking strong positive emotions about a particular cause or issue.