Of Ferrets, Iron Man II and other matters arising

A perfect weekend should necessarily contain bike rides, Robert Downey Jr., caramel popcorn and happy tales of happy tails. Which pretty much sums up my weekend, although there was nothing essentially wrong with my utterly productive week. Granted, my workload has doubled, but I see this as an opportunity to assist twice as many people in need, and a way of appraising my own ability to work under pressure. So far, I am holding up rather well and enjoying the challenge of meeting new goals.

Saturday morning arrived like a welcome friend, and off I went to the SPCA animal shelter to put in my weekly 4-5 hours of animal care and kennel work. There was, as always, the promise of new volunteers to train and mentor.

Rose and I got to work bathing and tickwashing the dogs in the Maternity Kennels in the afternoon. I was told Reve has not been feeling well and has taken the day off. Our other expatriate volunteer Roli provided some assistance with some of the more skittish dogs. Many of the dogs, especially the new arrivals, had matted hair which needed trimming and grooming, which I did with pleasure. When I first started volunteering, I found grooming to be a messy, complicated and time-consuming affair, but as with everything else, I improved with practice and experience. Rose and I groomed about 2 dogs each after we had finished bathing all the dogs. I swept up the clumps of hair and washed and rinsed all our dog-bathing and grooming gear and put them away. 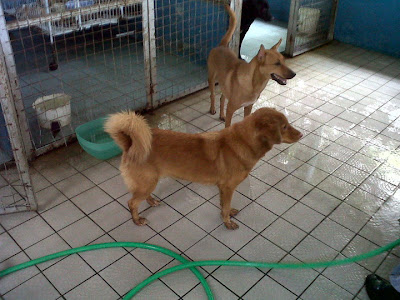 Mummy Dogs at the SPCA Maternity Kennels awaiting their turn to have a bath. 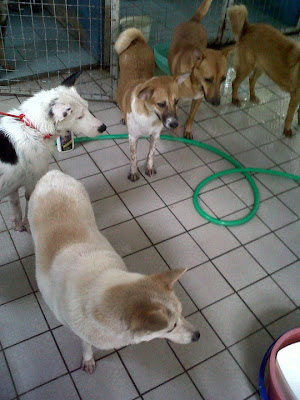 I can only hope that our efforts in bathing and grooming the dogs pay off and they find good homes soon.

I spoke to That Special Someone the night before, and was gratified to know that he too would be volunteering at his animal shelter over the weekend. I love it that we have started doing things together despite being half a continent apart. There were so many things I wanted to discuss with him, such as the Gulf of Mexico oil spill, and the Hulu Selangor by-election defeat, and the death of Lola who is one of our oldest shelter dogs, and the Liverpool-Chelsea match on Sunday, but when we meet online I am often overcome by I-don't-know-what and am content to just talk vacuities and swap music files and be in each other's presence. Ah well, at least we will be working together on an anti-vivisection signature campaign that would involve both our governments. I can't wait for him to come over so we can volunteer together and help other living things. In the meantime, I will have to clean the SPCA shelter on my own.

I started cleaning and disinfecting the shelter after our gates were closed to visitors. Sugen cleaned the kennels in the central area while I swabbed and scrubbed the puppy cages, Cattery, office/reception areas and Ready-for-Adoption kennels. It was in the Cattery that I met our latest neither-canine-nor-feline surrender, a little male ferret with the handsomest face and most genial disposition imaginable. 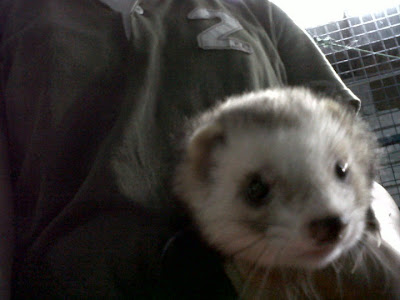 Say hello to His Ferrety Highness! 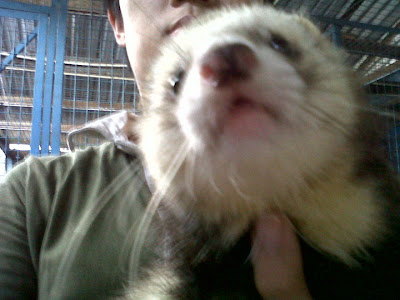 Surely it's a crime to be this cute!

Thanks to the wonders of information and communication technology, I snapped pictures of His Ferrety Highness on my 'Berry and uploaded them onto my Facebook right at the shelter to increase His Ferrety Highness' chances of adoption. My strategy worked, because I started receiving queries and inquiries almost immediately. By the end of the day, His Ferrety Highness was adopted by one of my buddies, Aza, who is a vet-in-training and a former SPCA officer. 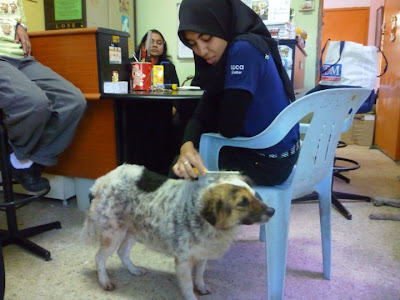 Aza has a kind heart and a gift for connecting with animals. I can't think of a better caregiver for His Ferrety Highness.

I finished cleaning the shelter by 1800h, with a little assistance from Sugen. It was time for me to shower, change and meet up with my buddies Nicole, Jacinta and Moses. It was Nicole's birthday, and I had spent almost an hour queueing up outside the cinema the night before to purchase tickets for Iron Man II as part of a birthday treat for Nicole.

I met up with my friends at Tropicana City Mall, which is down the street from my bachelors' quarters. The management of the Mall had offered booth spaces to the SPCA and several other animal welfare organisations to put animals up for adoption and to promote the cause of spaying, neutering and responsible pet ownership. Response to the campaign was good and a lot of positive attention was generated, but a shopping mall really isn't the most likely of places to find adopters for animals. Only one puppy was adopted all day, although we did manage to sell a lot of merchandise and garner a lot of support for our "Animals Matter to Me" UDAW Petition. 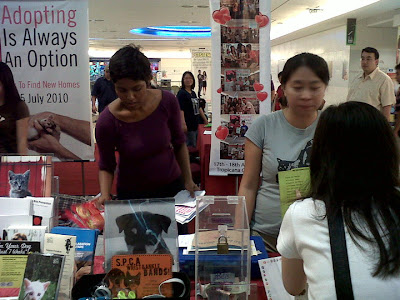 Jacinta and Nicole tending to visitors at the SPCA booth. 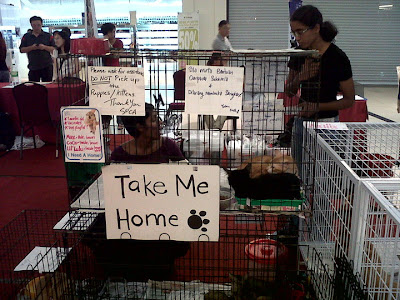 Jacinta and Amelie attending to the needs of the kittens. 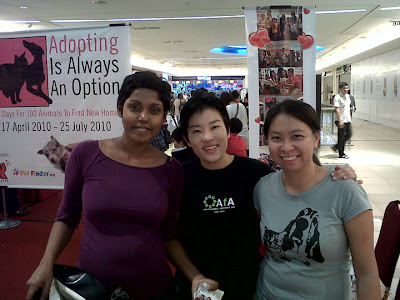 One for the album -- J, me and Nic on the occasion of Nic's birthday.

I helped with the tabulation of receipts and cash received and we tidied up the booth together with the help of 2 of our staff and several of our outreach volunteers. Moses turned up to help us with putting away the cages and banners. We hadn't any time left for dinner, so we washed up in the restrooms and rushed off to the movies. 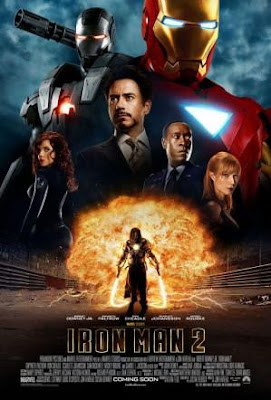 Iron Man II was released in Malaysian cinemas on 30th May.

I must admit there is something deeply satisfying about craning your neck up at a giant screen in a darkened cinema, watching Iron Man thrash the stuffing out of drones, after a physically demanding day of animal care work.

What can I say about Iron Man II? It's not going to the Cannes Film Festival, of that I am certain. It does have certain scenes that makes one reflect on one's notions on power, courage and moral free will. But on the whole, it's just exciting Hollywood nonsense with impossible-looking superheroes and even more impossible-looking supervillains.

However, despite all the noise and explosions and broken skyscraper windows and blown-up drones, there was still a sense that there were questions left unanswered at the end of the movie. I spent the later half of the movie agonising over the sulphur-crested cockatoo in the movie. What happened to the bird in the end? Is the bird okay? Was he harmed in any way? And where's the disclaimer that's supposed to tell us that no animals were harmed in the production of the movie? What did they do with the cockatoo after that?

Back into the blinding light we trooped after the credits rolled. And back to the bachelor quarters I returned after a pit stop for an iced coffee at midnight. On Sunday I would go back to the parental home -- to bathe the dogs, clean the house, tidy the yard, read the papers and ride my bike -- but for now, just now, on a Saturday night like this, it feels as though the weekend would last forever.
Posted by ~CovertOperations78~ at 17:27

Thank you, Kitties-In-Sydney! What a deep philosophical observation. At certain angles, ALL of us look like ferrets. Maybe we are descended from ferrets.

Thank you, Ellen, Au and Target! They are all beautiful aren't they? Hope all the dogs find good homes soon.

CO78,
Charles Darwin is flipping in his grave! Yeah, I'd rather be descended from ferrets than from apes! You did a good job with the doggies...they look so fluffy and cuddly (from a human point of view, OK). har har har *evil thoughts*

You like Robert Downey Jr, too?! I've loved him from the moment I first set eyes on him, so long ago. And despite the troubled life he's had, I hope it all works out and he stays 'clean'.

And I simply LOVE the ferret!! He's too adorable! I'm so glad someone's got him already, otherwise . . . .

About that special someone: I know what you mean when you say you need to share so much, but end up being simply happy to just be in each other's presence.

Thank you for dropping by despite your hectic schedule and The Big Move! Robert Downey Jr is quite lurvely in a bad boy sort of way, is he not? Give me a cad over a foppish DiCaprio or Hugh Grant any day!

Oooh... you want a ferret? Why didn't you say so? Next time we have one in the shelter, I will text you, then you can let me know whether you and Chuan would like a ferret baby.

As for That Special Someone... you know it's really love when you are just so comfortable and happy with each other that there is no need for clever conversation, makeup or doing stuff to impress each other. :D :D

Your mention of "Raise the Red Lantern" brought back memories of that movie which I had enjoyed watching a long time ago.

"Hable con Ella" is an intriguing title. Was it made in Spain or Mexico? Is it an Almovodar film? I'd be interested in finding out a little about it.

You are absolutely correct, "Hable Con Ella" is by Pedro Almodovar. Filmed in Spain, if I remember correctly. It is tragic and disturbing but ultimately hauntingly beautiful. Oh and all those little artistics touches -- the stories-within-stories, the film-within-a-film. It's a masterpiece!

As for "Raise The Red Lantern" -- ah, I felt like becoming a nun and taking a vow of celibacy after watching it! All that competition! The scandals! The Ruritanian intrigue! The backstabbing! The power struggles! Wow -- why bother?!?!

It's taking a while to reconstruct from the blog I shut down. Now you're in.

I have visions of you like a sheep shearer! They do the shearing so fast - all before our eyes. Only you wash down the doggies like a pro:)). Glad to say Robbie rather enjoys his bath.

Thanks, CO'78 for your information about "Habla con Ella". I took a shot in the dark about its creator being Almodovar (thanks for the spelling correction). I have seen a number of his films and that title sounded like one he would adopt.

Your conclusion after surveying all those conflicts illustrated in "Red Lantern" was hilarious.

Dear Hobbit64,
Here's hoping that the MI doesn't trace you here. I'd advise caution. Thank you for adding me. I understand my duty of confidentiality.
Cheers!

Dear Keats,
A sheep shearer! Thank you for the comparison! Sheep-shearers are highly skillful and smart! Sheeps kick hard and their hooves can leave nasty injuries. I just do the best I can to give the animals the best chances possible of adoption.

Dear Louis
Isn't it awesome that we share the same taste in movies? "Red Lantern" is, I believe, a political allegory. Under a power-crazy, self-absorbed and unjust ruler, there are no winners save the ruler himself. Everyone suffers. Everyone dies.