Mayhem in Melaka! Accounts of a not-at-all-restful staff retreat

These two words evoke memories of an entire two days spent holed up in air-conditioned meeting rooms, as interminable golf games take place outdoors. Of volleyball games and bowling matches conducted with faux joviality. Of ostensibly hot dinners which are nothing but congealed lumps of cheesy potato wedges and gelatinous vegetable goo by the time we repair to the dining hall from the conference room. Of hours of simpering and cringing through 'ice-breaker games' which compel us to make animal sounds and tear around the conference room like genially demented kamikaze pilots.

And so it was with a great deal of moaning and sarcastic repartees that my workmates and I were pulled away from our workstations and our ever-growing mountains of files to attend a departmental staff retreat, at a location which I shall not disclose, in Alor Gajah, Melaka.

Reductions to our retreat budget meant that our accommodations had to be downgraded from a reasonably comfortable resort to very basic lodgings in an unheard-of location, which looked and felt as though it hasn't seen a vaccuum cleaner or a mop since Argentina invaded the Falkland Islands.

Still, being restless and accustomed to working, nay, - thriving - in adverse conditions, my workmates and I descended upon the place with our usual gung-ho spirit. I was told the noise level in the district went up several thousand decibels upon our arrival.

I was one of the designated drivers, and am pleased to report that The Battletank performed quite heroically all the way there and back. 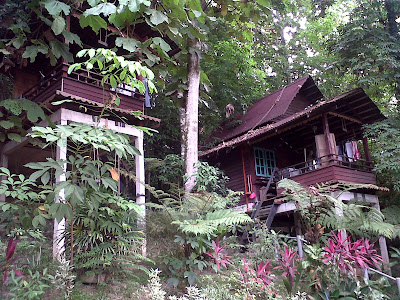 The chalets look picturesque from the outside, but are in somewhat poor repair on the inside.

It wasn't the air of shabby desolation about the place that dismayed us about the resort, however, for it did have a sense of quiet dignity about it. Rather, it was the fact that the people who run the resort are so overt about their religious zeal. There were tasteless and offensive banners and literature everywhere, essentially running down all other religions as false and inferior. I almost expected the staff to start speaking in tongues and the theme song from "Children of the Corn" to start playing in the background.

In the conference room, we learned from a plaque that the founder of the resort died the same year as his final mission, which, incidentally, was to Pakistan, and my colleagues and I speculated on whether he had been murdered in Pakistan.

It wasn't a politically-correct conversation to have, for sure, but the evangelistic atmosphere about the place was so oppressive that it was difficult for us to remain respectful and sensitive. 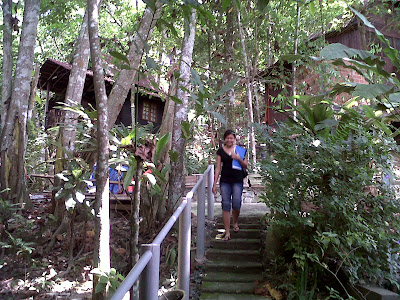 One of my colleagues came over to drag me out from under the bed as the brainstorming sessions begin. 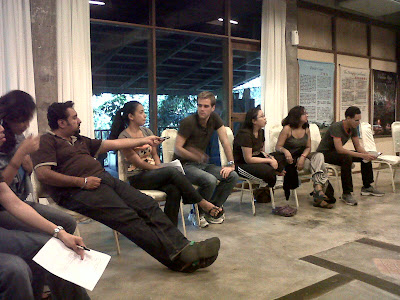 The productivity and problem-solving seminars had the same air of hopelessness as the Chinese Communist Party's denunciation meetings. 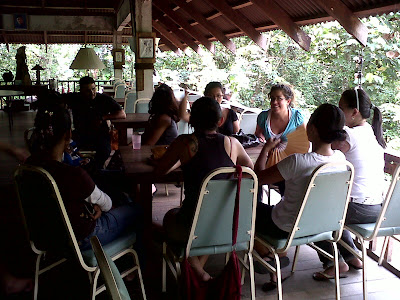 Lunch provided some cheer -- the food was good and there were specially prepared food for those of us who are vegetarian. 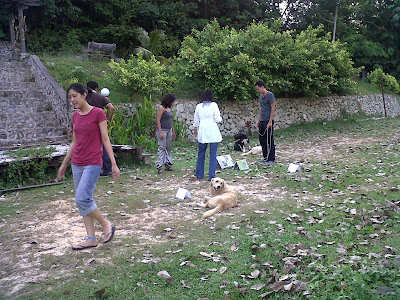 We were supposed to build replicas of refugee camps in the open field, but the resort owners' dogs came and flattened everything. The dogs must have been agents of the military government! 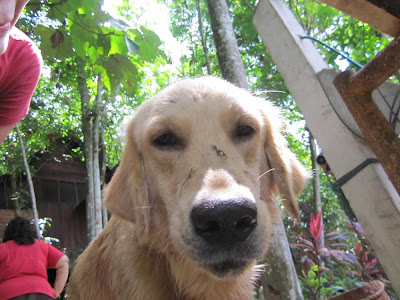 Don't be deceived by the sad face -- these dogs are impossibly cheeky! 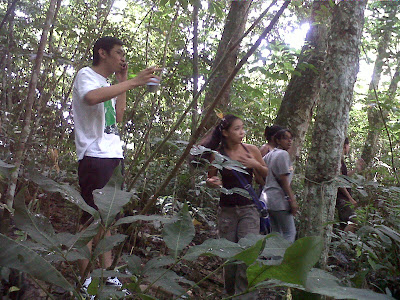 Even the so-called 'jungle trekking' session failed to impress. We tramped through what was obviously a former rubber plantation, swearing and cursing at the mosquitoes. There was no flora to speak of save recolonisers such as macarangas and other weeds. My colleague Nick managed to sneak a cigarette and a plastic tumbler of coffee with him on the trail. Clever sod. 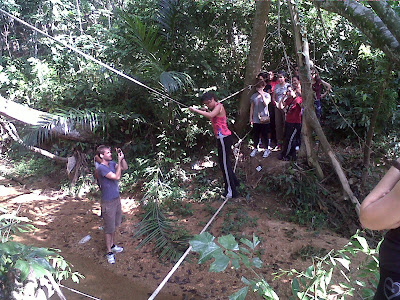 The rope bridge across the stream, if you could call it that, was a great source of amusement for us. 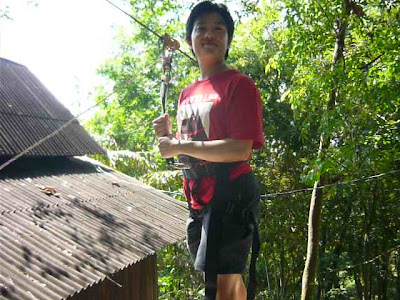 The activity that we had most looked forward to was the aerial runway, also known as "Flying Fox". I was the first to go, since I have no fear. 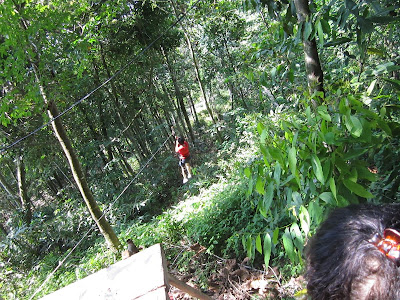 Serves me right for being cocky. I slammed right into the truck tyre that was intended as a brake and suffered head and neck injuries as a result. For 3 days after the incident, I had to live with a whiplash injury, giddy spells and ringing in my ears. 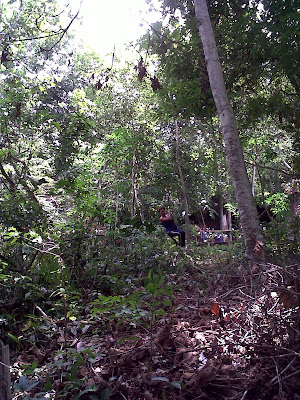 And this is how we prune the foliage with our feet. 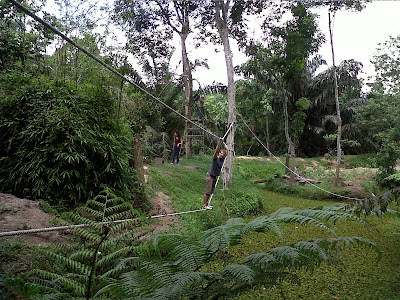 Some of us just couldn't get enough of the rope bridges. 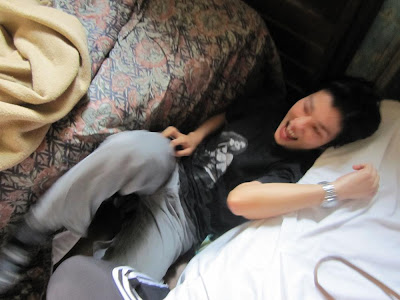 We reviewed the photos later that night and I was so overcome with mirth that I fell off the bed howling with laughter. My laughter set the others off and we raised the roof with our collective baying. Rumour has it that we could be heard all the way down at the Mahkota Parade. 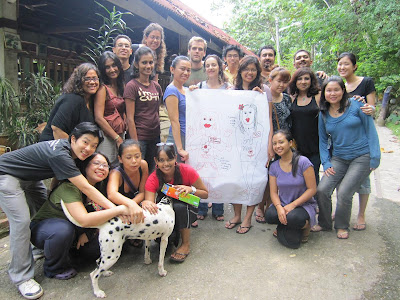 Our neither-relaxing-nor-productive 2 days came to an end on Friday evening. We managed to get one of the resort dogs to join in our group photo. The dogs were unfazed by all the noise and attention.

Our staff retreat may have officially ended at 1600 hours, but my passengers requested a jaunt to Melaka town in order to do a spot of shopping. I complied, because the pain in my neck and head were not of the degree of severity (yet!) that would require me to let someone else take over the wheel of the Battletank. All through the drive home, I asked my buddy and front passenger Amarjit to keep up a lively conversation to help me take my mind off my pain. It was with admitted relief that I dropped my passengers off at the office so I get a heat pack for my throbbing head and neck.

We may have wasted two days at a retreat that has brought us no visible benefits, but it was good that we spent it in the company of friends. It was a Friday night -- and the weekend brought with it the promise of football matches, helping out at the SPCA, spending time with my friends, a Saturday night dinner party, a Mothers' Day lunch, bike rides and other adventures. Now that's what I call a retreat.

Covert Operations, OUT.
Posted by ~CovertOperations78~ at 21:23

Oh you would sooooo love the "villa" at Pusat Latihan Medan Institut Latihan Tentera Udara Ipoh.
Especiallly because you can sneak oout to Old Town Coffee across Medan Gopeng.

CO78,
Where in the world is that "resort"? Sounds so titillating...har har har *evil thoughts* Lucky it wasn't the "you can check-in but can never check-out" type of place. Or else, you won't be able to tell the story. I can think 1,001 ways to "give back" to the HR people who organised the "retreat". har har har *evil laughs*

'Staff retreat'! Ooooh how how I hated those words when I was working!!! And luckily for you, you seem to have had 'nice' colleagues who, at the very least, knew how to laugh! Some of mine ... I don't want to go there! Hahahah!

And how is your neck and pains in the head? Oh, my little darling, you are such a naughty girl lah!

I'd like to see the kind of activities they have at the Pusat Latihan TUDM Ipoh! I'm sure it's a lot more fun than ours! Old Town has nice ice cream toast but all their coffee and tea drinks cause instant diabetes!

*Evil laughs* means you're Brad, right? It wasn't a Psycho kind of motel, it just had stuff that was offensive to everyone, both to those of other religions and to those who are of the same faith as the resort owners! HR didn't know all this when they approved our budget. And the team who organised it did the best they could, but morale is just a little low at the moment because of the heavy workload and the ambiguities in policy.

I am nowhere near as naughty as the resort dogs! The dogs are little rascals with doe eyes!

Yes, it's a good thing my workmates and I enjoy each others' company and are on the same wavelength.

My neck pain developed into a fever and sore throat. Not sure how that happened but my colleague told me the sore throat came from shouting and laughing too much and eating too much potato chips. I am collecting the metal World Cup pendants from the chips, so it's been chips for breakfast, lunch, tea and dinner all week.

Thanks for checking in on me!

Overt religious oneupmanship, Pakistani roots, dogs, nature (ok, secondary jungle)retreat ... what a mash! Has me intrigued tho ...

Hello Zaharan, long time no hear! Any updates on Ajai?

That 'resort' isn't very different from most of the budget resorts in the rest of the Peninsular. It wasn't bad. We just didn't like the whole evangelistic zeal about the place.

Your narrative, CO'78, lists many privations inflicted on you and your colleagues that border on the inhumane. But the one that should be classified as a crime against humanity is serving "congealed lumps..." as food in Malaysia, Malaysia, where there's mouth-watering food on every block! incredible and unforgiveable.

I will no longer be able to tuck into some marvellous hawkers' food in Malaysia without thinking that somewhere, in some Retreat, some unfortunate souls are being deprived of their birthright.

It is regrettable that it is impossible to escape the plague of organized religion. Can anyone seriously believe that a Supreme being of any name would sanction the odious stuff done supposedly in his name?

Another of your thoroughly delightful and thought-provoking, finely crafted pieces. Thanks.

Yes, indeed, what horrors we bestow upon ourselves in the name of organised religion! The Supreme Being would express grave disappointment indeed at such blatant waste of Tyvek, PVC, paper, ink and Ikea picture frames to propagate hatred and destruction in an attempt to glorify Him/Her.

As for congealed lumps, you must not have been to any school or office canteens in Malaysia! I have since christened my office canteen operator "Pak Abu Fear Factor". His curries are so greasy that our mouths and stomachs are waterproofed for a month! His rice and rotis sit in one's stomach like a rock! His vegetable soup made me ill for 2 days!

Oh and my old school canteen -- we didn't like the "Happy Meals"! We didn't know what surprises would come with our next meal -- a fruit fly? A scarab beetle? A baby roach? A lizard tail? A scrap of foil?

? Disturbing literature on walls - God please help us!
Hope you've recovered nicely from your bodily pains. Did you do a Tarzan call and then let let yourself loose???

Thank you for your concern! I am still in some pain, but ignoring it.

The disturbing literature on the walls were of the fire, brimstone, gates of Hell and tear-down-Stadhuys-and-burn-down-Bukit-Cina variety. I don't think a sensible Supreme Being could condone that.

How did you know I let out a Tarzan yell?!?! You could hear me all the way from Alor Gajah?!?!

It wasn't kewl, man. It sucked quite a bit. We were pretty bored and in a mutinous mood. LOL.

CO78,
Purrr....we've sumthing cooking for you. Hurry up, come over to my house before Brad demolish it. It's yummyliciously berrylicious I promise. meow....

Coming right over! Thank you, my purrrfect friend!