Wag & Walk Weekend and other news 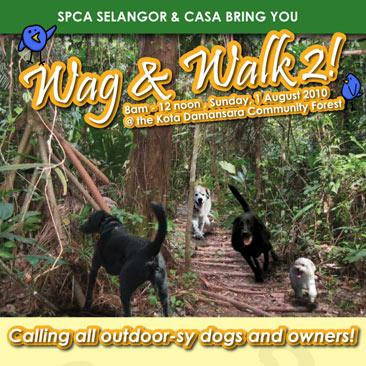 Nature trails and outdoorsy dogs -- Can there be a better combination than this?

It was with the aim of bringing the two together that SPCA Selangor held our second "Wag and Walk", a fun nature hike designed to bring dogs and dog-lovers together, at the Kota Damansara Community Forest Park last Sunday.

Co-organised by Casa Pet Store, the event had the objective of raising funds for the SPCA's new eco-friendly animal shelter.

I was recruited as a volunteer by Jacinta and team, and so I had to rise early on a weekend morning to assist at the Registration and sales booths. Although it was announced that registration was limited to 80 dogs and their handlers, we could not turn away many people who had come all the way to the Park with their dogs to enjoy nature and to socialise with other dogs and people, and so they were allowed to participate in the event although they were not entitled to goodie bags. 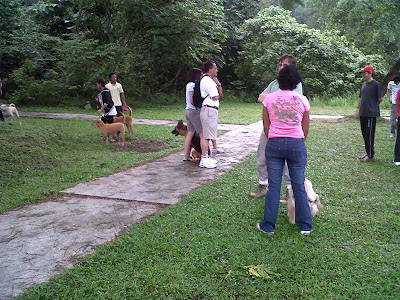 Early birds (or rather, dogs) at the head of the trail, waiting for the walk to be flagged off. 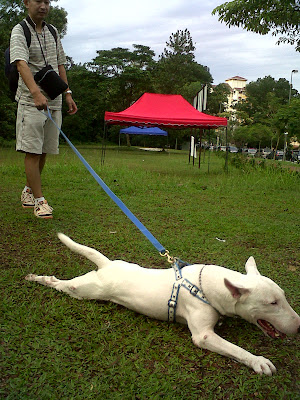 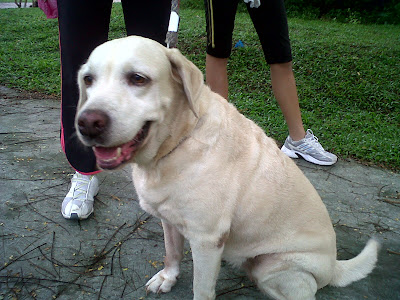 "I wonder if there are monkeys and squirrels for me to chase in there." 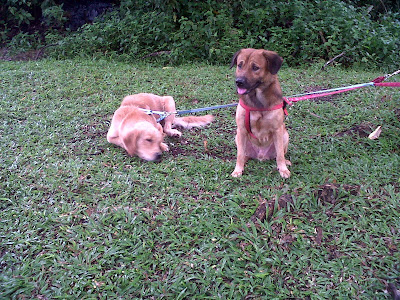 "Please don't leave us behind!" 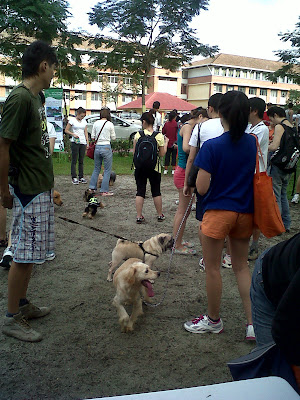 Happy dogs and people upon returning from their 2km walk. 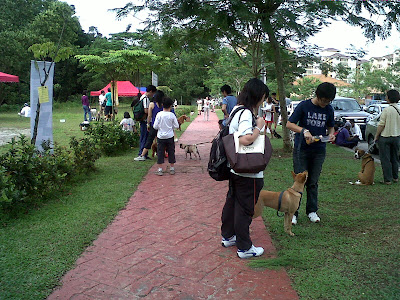 The dogs were given drinking water upon concluding the walk, while their humans were given newspaper sheets to clean up after their dogs with!

The event did not just end with the conclusion of the 2km walk. The organisers had lined up 6 exciting and entertaining games for the participants. The games included a "Waggy Tail" contest, a ball-retrieving contest, a "Simon Says" game and a doggy tennis competition which entailed the dog running back and forth between two handlers. 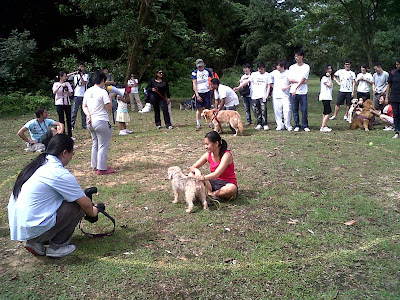 Handlers walking their dogs in a circle during the "Simon Says" game. 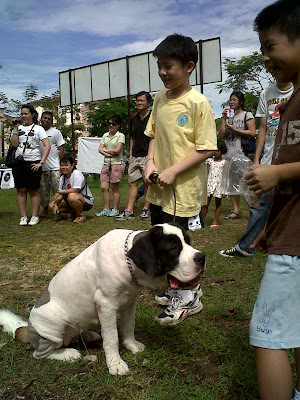 Two youngsters and their remarkably obedient St. Bernard were the finalists in the "Simon Says" game.

The event was officially over around 1230 hrs. Most of the food had been sold, and the unsold food was given either to the volunteers or brought back to the SPCA shelter for the staff. The merchandise, banners and trestle tables were packed and loaded onto the SPCA pickup truck. I wanted to make sure that we left the forest park in a better state than it was when we arrived, and so I mobilised other volunteers into helping me pick up litter from the park and sidewalks and sorting out the recyclables. I was pleased with the end result, for the park and event grounds looked spotless. The volunteers and I hauled the garbage out to the curb facing the Sect. 10 school to make it easier for the waste collectors to notice the garbage and pick it up. The recyclables went with me in the Battletank to the community centre.

I departed for the SPCA shelter after the Wag & Walk fundraiser, as I knew that the services of senior volunteers would be even more critical now that Reve is no longer with us. I started work on bathing and washing the dogs in the Central Area after a short discussion with the staff on our volunteer policy and other matters.

I spent the rest of the day bathing dogs and cleaning the Catteries, kennels and shelter reception/admin areas. 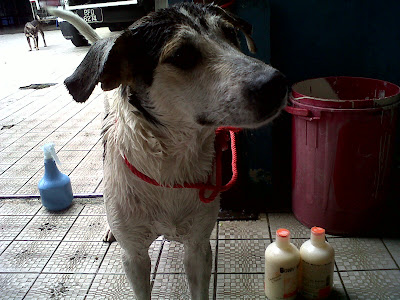 “Won’t you please take me home? I make a good companion!” 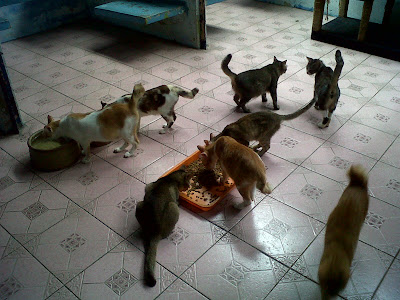 Feeding time at one of our catteries. 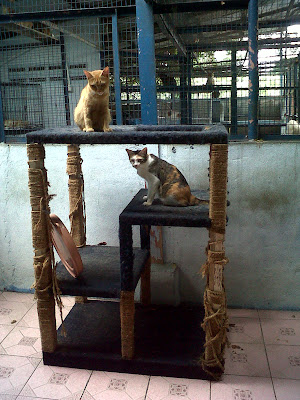 A pre-loved cat tower provides stimulation and climbing space for our shelter cats.

Ever since Reve’s demise, we have been having difficulty attracting and retaining new volunteers. There are limits as to what I can do, as I work fulltime, have many other social and volunteer commitments and am only able to come to the shelter on the weekends and my days off.

Being mired in drudge work has never been one of my life's goals, and I have no desire to be stuck doing hands-on shelter work week after week for the rest of my life. Every organisation needs renewal, in the interests of democracy and also to allow room for fresh ideas and perspectives. I hope to be able to work together with the SPCA Committee to try to recruit and retain new volunteers, draw up a volunteer manual and create an SOP for the induction of new volunteers. Just as the goal of every animal shelter should not be to expand its infrastructure and take in ever-increasing numbers of stray animals, but to aim to educate and reach out to society to such a point that there is no longer a need for pounds and shelters, the goal of every good volunteer should be to encourage and foster volunteerism, develop better ways of working and create new opportunities for new ways of contributing and volunteering. I don't see this level of dynamism in the SPCA or Malaysian Nature Society yet, but I believe both organisations have great potential for attracting the participation, involvement and activism of members of a civil society. It's not going to be easy, but nobody's going to be able to stop me from trying.
Posted by ~CovertOperations78~ at 22:24

Were the dogs well behaved? I guess if they are used to walks, they're fine.Am thinking of Robbie who I think will create a ruckus among his own kind! Hubby says he barks a lot at the vet.

I went to my small orchard in my village yesterday. There I saw 3 healthy stray dogs resting and they immediately darted off upon seeing me approaching. Hopefully one day they will accept me as a friendly party and stay on to keep me company. I guess their mere presence should keep dangerous snakes away from my orchard as the neighboring orchard is a real breeding place for dangerous snakes.

A couple days ago while browsing in a large department store I heard a Public Service announcement over the PA system promoting spaying and neutering of pets. That would fit in with your goal of educating the public so there would be a diminishing need for pounds and shelters. One way to get the word out.

Dear Keats,
The dogs were surprisingly well-behaved. We did issue a statement that the organisers have the right to remove anti-social dogs from the event grounds if the handlers could not control them. There was only one 'incident' at the end of the event. Taro growled at another male dog. Apart from that, all went as smoothly as a Disney movie!

Salam Abang Zawi!
I hope the dogs stay, too. They would keep intruders and dangerous animals at bay. If I lived close by, I would try to catch them, bathe them, vaccinate them and neuter them for you.

Dear Louis,
Thank you! That sounds like a good idea. I will try to find out if we could tie up with major radio stations and supermarket / dept store chains for that. It would take only a minute or so of their airtime but would be a good public relations exercise for them too. Everybody wins.

Looks like everyone had a good time: both the doggies and their obedient slaves!

Yes, that's going to be a big task, eh? Getting volunteers. It takes something special to be one - and you've certainly got what it takes.

But it must also be a sad duty, and one that you will need to take a break from, from time to time. Otherwise, it would wipe you out.

We are so cruel to animals. It's like we think they feel no pain, be it physically or emotionally. Really sad.

Thank you for your kind comment, dear Pat! The doggies had fun taking their humans for a walk. People can be cruel and thoughtless to animals and plants. People can be self-serving and destructive. But people also have the potential to change things for the better. We must have faith that if even 5% of the world makes an effort, things can get better. And it will.

CO78,
That's an event that a rowdy foursome would like to attend - just so we could get the canines to go bonkers! roar! roar! roar!

Thank you for coming by, dear Kitties-In-Sydney! I hope Tom is much better?

Yes, I think you would drive all the dogs crazy, especially since they would have to be on leashes and can be ejected from the event grounds for misbehaving. I can just about imagine the havoc the four of you would create.