Mud Baths and Macarangas at the Raja Musa Peatland Forest

One of the Facebook groups that I belong to, Eco Warriors, has been working together with the Global Environment Centre (GEC) for over a year to rehabilitate the Raja Musa Forest Reserve, an illegally-cleared peatland forest further depleted by slash-and-burn farming and oil palm cultivation. I had wanted to participate in one of their monthly tree-planting programmes for a long time, but could not find the time to do so, due to all my other commitments with the SPCA and MNS.

A little determination and a great deal of time management made my wish of planting trees alongside other volunteers come true last Saturday, 18th September 2010. With three friends – Mohala, Marvin and Amirah Nadia – in tow, I guided the Battletank along country roads in Kuala Selangor and Batang Berjuntai to the tree-planting site.

Our journey was by no means a direct one. My dubious navigation skills took us almost to Dengkil. My ever-patient buddies did not complain, however, and kept up a lively conversation in the car.

“Wow, there aren’t any trees at all, and I can’t see a single fruit tree”, exclaimed Nadia, as we drove past the Selangor Fruits Valley. A more barren piece of land has never been seen. The hills were denuded and it would take someone with a vivid imagination to believe that the said valley had anything to do with fruits.

“The fruits can only be seen by the intelligent and the wise”, Marvin averred, affecting a wise and stentorian tone. “Over there, there are Watermelons of Wisdom. Can you see them? And here we have Intellectual Coconuts, and Oranges of Intelligence.”

“I see them! I see them!” the rest of us squealed, playing along. I am glad that the sanity of my friends is as questionable as mine.

Several hundred wrong turns later (which made me question my decision to sign up for the next season of Amazing Race Asia), we finally arrived at the road leading to the Raja Musa Forest Reserve. We exited from the Battletank with relief, thankful that our gratuitous vehicular emission of CO2 has finally come to an end, only to be struck by how dreadfully hot and dusty it was outside. The sun rained mercilessly on our heads and backs as we trekked the 1km route to the planting site. 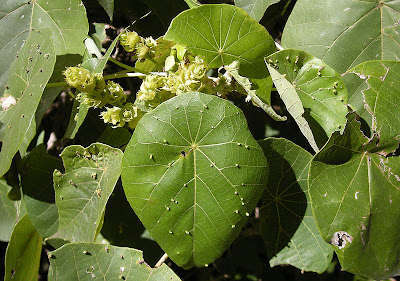 Mohala, who has attended a tree-planting session before, informed me that most of the trees planted would be macarangas supplied by the forestry department. “I came all the way here to plant recolonisers like macarangas?” I asked, indignant. “Pshaw, you can have macarangas aplenty at the Kota Damansara Community Forest! What’s the point of planting macarangas? They are short-lived and have no economic value!”

“Well, that means we won’t have to worry about illegal tree-felling and tree theft,” Mo replied. “Besides, the soil is so waterlogged and depleted that not much else can grow there”.

“If I had my way, I would grow tualang, meranti, kapur and jati. Big-ass majestic trees!” I enthused.
“Yes! Definitely tualang, we’ll attract bees galore! And cengal and meranti tembaga that will remain standing for generations!” affirmed Mo.
Our hunger and thirst got the better of us, and the conversation took a different turn.
“I’d grow mangosteen, mangoes and ciku”, I said.
“I’ll grow rambutans and duku -- real duku, with hard skin, not the strange stuff trucked over here from Thailand” Mo said.
Our thirst and hunger raged unabated. 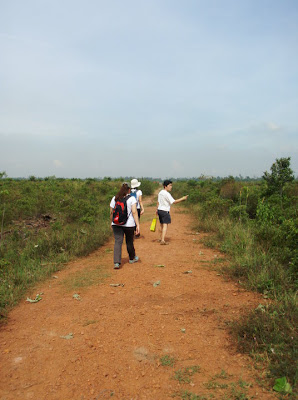 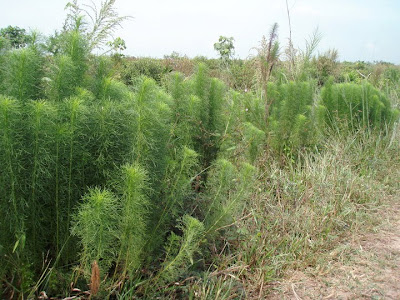 Wild fennel grew along the dirt track to the tree-planting site. Mo spotted a snake in the cool grass under the fennel stalks. It was a beautiful but coy reptile, with iridescent keels that shone and sparkled in the sunlight like polished jewels. “A Paradise Tree Snake”, I whispered reverently. “I’ve always wanted to see one in the wild”. Mountain Man Marvin noted that he has seen quite a number of paradise tree snakes in the jungles and on the farm where he grew up. Mo and I envied his good fortune. City Girl Nadia lagged far behind, nervous at the idea of meeting a snake which isn’t in an enclosure. 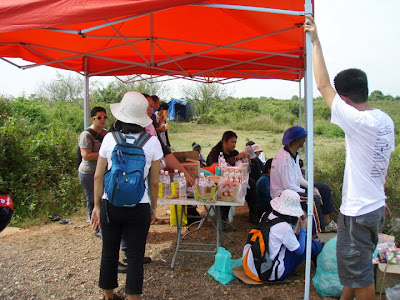 We finally arrived at the tent where we could refill our water bottles and leave our things for safekeeping. Now it would only be a 50-metre walk to the site. 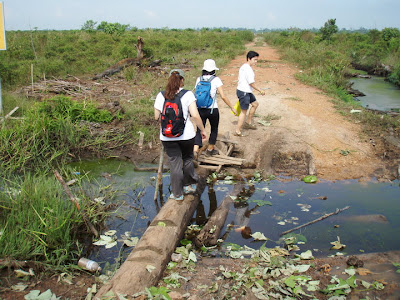 But first, we had to cross a dodgy-looking coconut trunk bridge over a stream that oozed, rather than trickled, with black gunk. This looked suspiciously like one of the challenges in Takeshi’s Castle. Marvin fairly strolled across, but Nadia’s nervous hops and leaps almost tipped her headlong into the opaque and almost certainly toxic oil palm plantation runoffs. 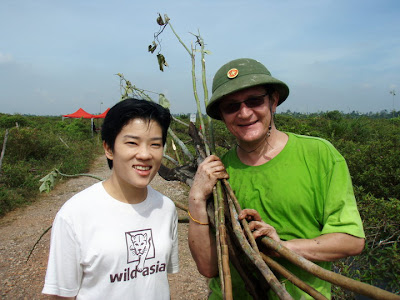 Hello there, Petri! We were full of admiration for my friend Petri’s WWII army hat. It doesn’t look as though the hat could do a good job of keeping him cool, but it sure made him stand out in the crowd! 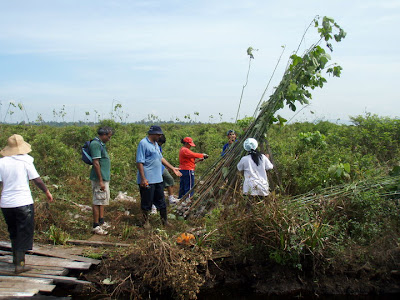 Over 90 volunteers, included a busload of Girl Guides and Interact Club members from SMK Assunta, planted a total of 2,000 trees that morning. We had to unload the saplings from the truck, rip the plastic bags open, dig holes in rows in the peat swamp and plant the saplings.

My friends and I each planted 15 – 25 trees. Since we arrived late, we soon ran out of cleared land and organised plots to plant our saplings in. I began pulling out weeds furiously to clear new spaces for my friends to plant our saplings in. The weeds came out easily as the soil was boggy and soft. Our shovels went into the fudge-like peat with satisfying ease, and we scooped the rich peat out and put our spindly saplings into the ground. The peat soil smelt earthy and damp. It was good to work together with friends, despite the heat and the relentless biting and stinging of unidentified insects. 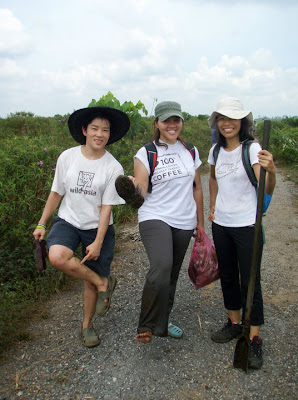 We didn’t quite leave the Raja Musa Peat Swamp Forest unscathed. I had been foolish enough to wear shorts and my legs were full of cuts and grazes. Marvin let me wear his cowboy hat to prevent heat exhaustion. Nadia fell, or rather, slid, into the mud and had to scrabble around in the mud for her missing shoe. Here she is, with the recovered shoe. Mo is the only one who didn’t look as though she had been at the frontline of a battle. Marvin found a pigeon feather and stuck it in his hat but refused to let us take a photo of him. “Wonderful, Marv,” I praised. “Now you will be imbued with the grace, tenacity and pooping power of the Common Rock Pigeon!”

We were among the last to leave and I dragged along a biodegradable bin bag full of litter that we had picked up along the way. We made a few new friends among the other volunteers, including several from the local Sathya Sai Baba Centre, and waved our new friends goodbye. We were positively dirty, muddy and foul-smelling by the time we arrived at the Battletank.

I drove us to a fuel station where we could clean up, and then we stopped by a roadside restaurant at Mo’s recommendation and had a hearty brunch of Indian food and iced lemon tea. I decided that we still needed proper showers and drove us all to the PLUS Highway Rest Area where we showered, changed our clothes and had A&W root beer floats and felt much better after that.

I dropped my exhausted and drowsy friends off at the LRT station after they declined my invitation for a cendol under the trees and headed home.

It has been another brilliant weekend, and we look forward to assisting the GEC in their future projects. Among GEC’s objectives are the rehabilitation and sustainable use of peatland forests, the promotion of integrated management of biodiversity and water resources, focusing on community involvement and biodiversity conservation, and bringing local communities, corporations, governmental agencies and environmental organisations together to collaborate in environmental projects.

CO78,
We have family living around the area. If we had known you'd be going there we could organise a red carpet welcoming committee. Or at least a good lunch and clean up. Mama said before they built the Kuala Selangor bridge, her Dad will use the Raja Musa trunk road to go to GrandMa's village in Tg Karang as the ferry service was unreliable. Interesting journey there. I'm sure if someone had consulted FRIM, they'd have suggested other trees than mahang (macaranga). purrr...meow!

Was that apparent wasteland in the second photo once forested, CO'78? If so, what a scourge has man inflicted on it.

Your tree planting project is terrific and you are to be congratulated.

I imagine that it takes a great leap of imagination and faith to undertake such a task because trees seem to take so long to grow. Yet, I look back on the then pathetic saplings that were brought in to landscape the new development where I lived in California, on a waterless, barren scrubby hillside and I am surprised that just in my lifetime they have matured into 40 year old trees already.

What a great workout and teamwork -all under the burning sun. When you make your next visit, those splindly macarangas will tower over you and you can be proud of being a 'forester'. Have a lovely Sunday tomorrow!

Perhaps, once the macarangas get going, other trees can be grown, and the area can become a lovely forest once again. How sad that you need to grow trees so that they won't be illegally logged.

As usual, a visit here helped me learn so many new and delightful things :)

Dear Kitties-in-Sydney,
Thank you for the kind offer! I wish we had known! We itched from the mud for a good part of the way home until we got to the rest area. A wash would have been much appreciated. Would you know of any trees you could recommend for a depleted peat swamp?

Dear Louis,
You are right about the second photo. I was told it used to be a peat forest until it was all cleared for oil palm cultivation. What horrors we bestow upon ourselves in the name of cheap oil!
I hope to go back one day and see that the trees we planted had not only survived but thrived.

Dear Keats,
Thank you for your support! We loved being like Johnny Appleseed and Elzéard Bouffier. That's the power of having ideals -- nothing is ever too little or too late.

Dear Pat,
We feel your love all the way from here! Thank you! Even if the trees get logged, killed, or just plain wither and die -- we'll just keep planting, we'll just keep nurturing. Nothing can stop us or hold us back.

Truly admire You and your stamina!

CO78,
My Mama said you could try planting anything from the cinnamon family, or "kampung" trees like jering, rambai or petai. Just observe what the villagers around that area plant in their backyard. purrr...meow!

Dear Emily,
Thank you for your support, my fellow tree-lover!

Dear Kitties-In-Sydney,
Please thank your Mama for her kind advice. You mean we can plant Cinnamomum burmanii in THAT kind of soil? We didn't see any rambai or petai trees but there were some banana, papaya and coconut trees nearby. Bananas and papayas are too short-lived, although they would be good to attract native fauna with. Lemme check with the GEC if we can get some corporation to sponsor some nicer trees -- rambai, petai and cinammon sound very attractive indeed. Thanks very much once again.