I learned at the grand old age of 12 that you can't avoid politics, even over the most uncontroversial, insignificant and apolitical of issues. And so it was no surprise for me to encounter the politicking, aggressive campaigning and alliances of convenience that came into existence just a month or two before the Malaysian Nature Society Annual General Meeting. As a committee member of the Malaysian Nature Society (Selangor Branch), being a witness to all the politicking that was going on only strengthened my resolve to be fair, ethical and responsible always, and to always keep my conservation and environmental education goals in sight even if everyone around me is getting disheartened or disinterested. As Plato put it, "Those who are too smart to engage in politics are punished by being governed by those who are dumber." And so soldier on I must, for the sake of the Society and for what's left our our wildlife and our natural environment. 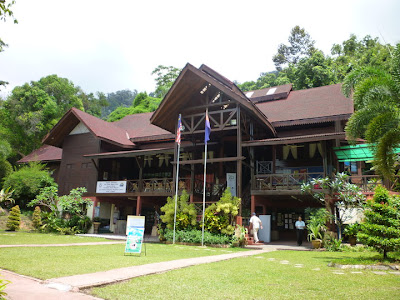 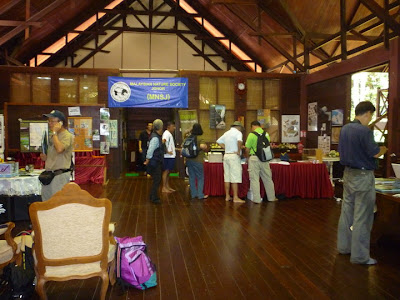 Approximately 100 members turned up for the AGM. The results, though expected, did not generate much enthusiasm. Many members, including myself, either abstained from voting for a new President or merely voted for the candidate they disliked the least, rather than the candidate they liked better (because there isn't one). Still, the new President is backed by a dynamic and strong new council this year, consisting of people that the members love and respect. I trust that the new council will raise the Society to greater heights. 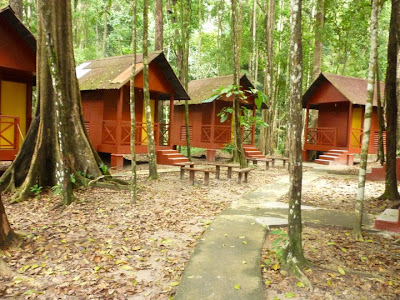 Our lodgings for the weekend consisted of very basic but satisfactorily clean and servicable huts in the National Park. I shared a hut with my buddy, Dr. Rangamal, or "Doc" for short. 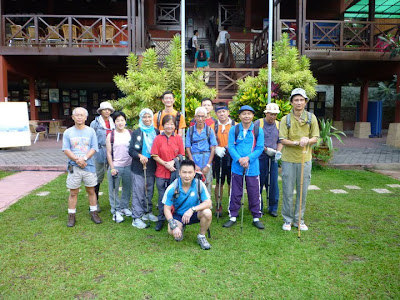 Doing the full trek to the peak of Gunung Ledang, also known as Mount Ophir, seemed like the perfect remedy to the tedium of meetings and elections. My 12 other trek-mates thought so too. Note the preponderance of senior citizens in our group of trekkers! Well done, seniors! 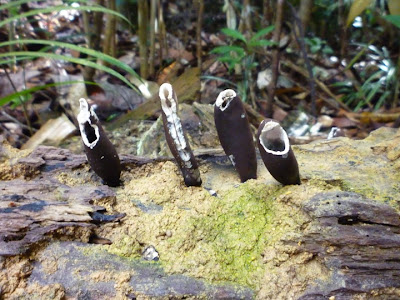 Unusual-looking fungi that I saw on the way to the Water Source. I thought they looked a little like Magnum ice-cream bars with some of the chocolate coating chewed off. 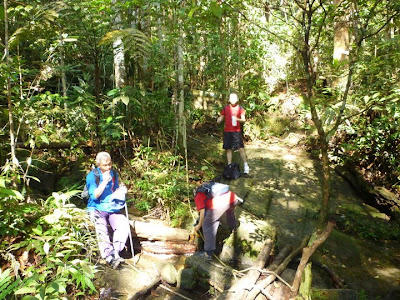 Taking a break by the cold, clear stream at Sungai Segitiga. 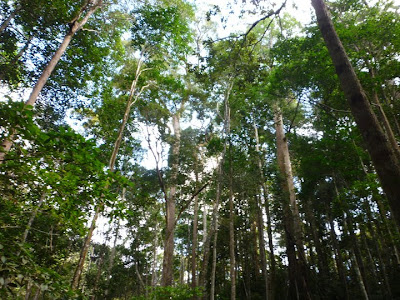 "The trees are God's great alphabet:
With them He writes in shining green
Across the world His thoughts serene."
~Leonora Speyer 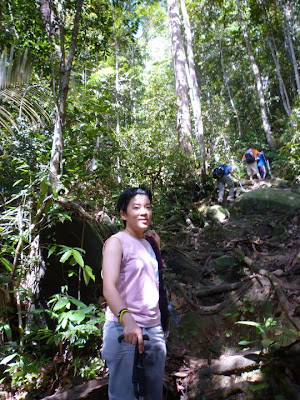 Scrabbling up the rocky trail, which wasn't very steep yet at this point. 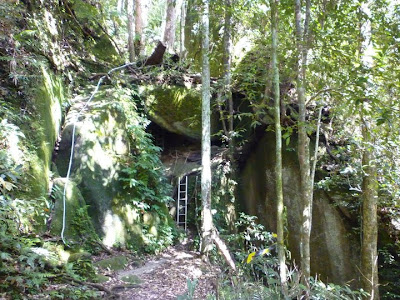 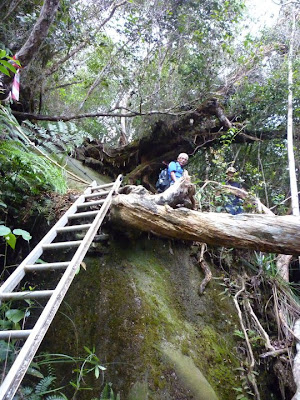 This is where strong tricep and deltoid muscles come in handy. The natural handholds and footholds are not always within reach. I was too short to reach the footholds, so I had to haul myself up onto the overhanging roots. Woe betide me should the root give way! 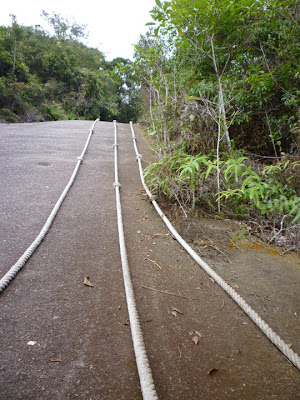 The only way up this rock face is by holding on to these ropes and climbing up. No safety equipment, no helmets. We earthy-crunchy types seem to thrive on living on the edge. 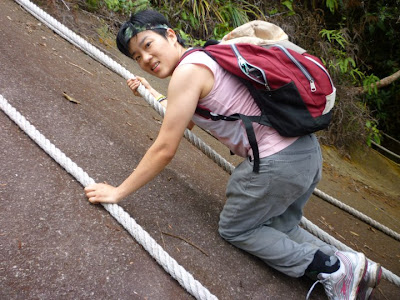 On your mark, get set, CLIMB! 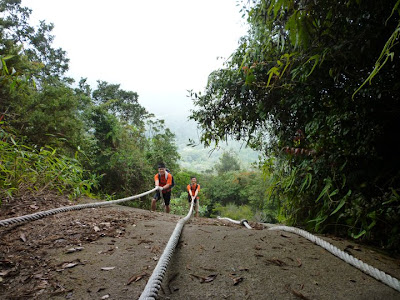 Okay, fellas, you're almost at the top! Just a few steps more! There, that wasn't so bad, was it? 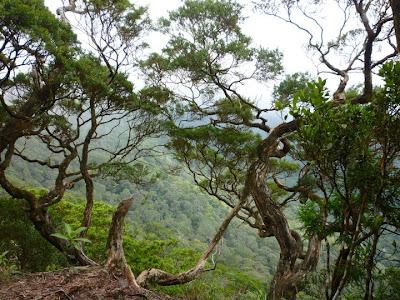 Natural bonsai trees and shrubs at an elevation of over 1000 metres. 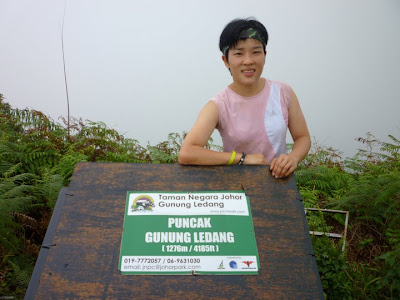 Sweaty, stinky and proud to have reached the summit. 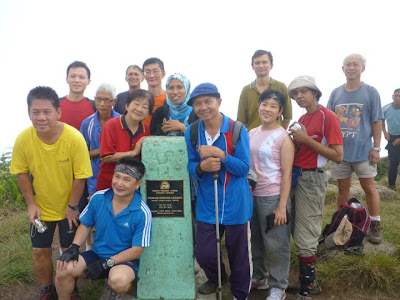 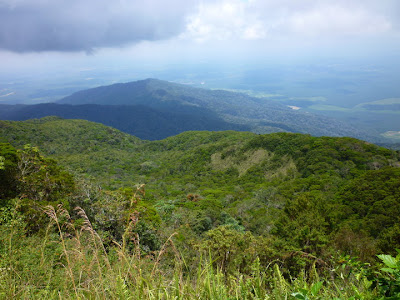 ... And if this were Bollywood, the heroine would start rolling down the hill and her saree would keep on unravelling for 9 kilometres or so, and all the while the hero and heroine would keep singing without missing a beat, while random tea pickers and farmers (all at least one shade darker in complexion than the hero and heroine!) would dance and sing back up in mellifluous voices that sound suspiciously like Sonu Nigam / Udit Narayan / Lata Mangeshkar. 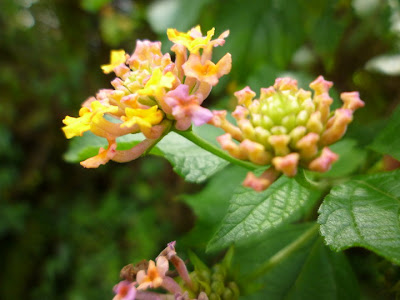 Lantana camara -- if only all invasive specie were this pretty! 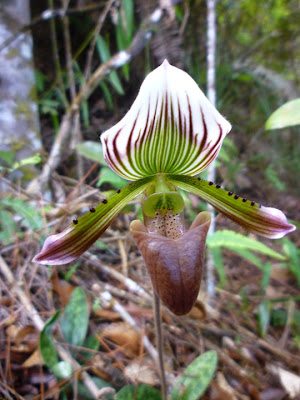 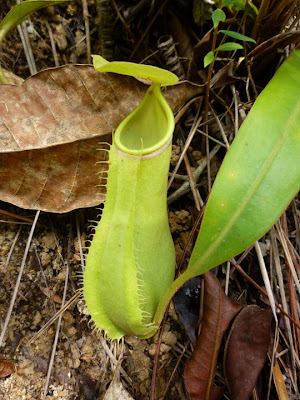 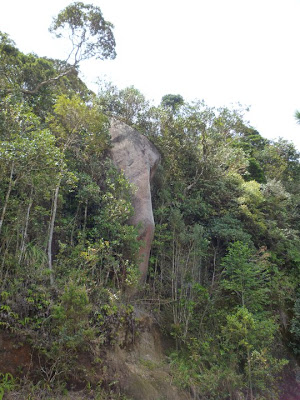 We learned from our guide and the Park management that we may be the last group of trekkers to ascend Gunung Ledang, as the State Government has plans to close off the national park and mountain to the public.

This is a matter of grave concern to us, as many of my compatriots, like me, suspect that there may be plans to 'develop' the National Park for oil palm cultivation. Rumour has it that the state royalty has plans to construct a palace halfway up the mountain as well. If this were true, one can only imagine the accompanying environmental impact -- increased noise and light pollution, the construction of roads and sewage and waste disposal infrastructures and the increase in traffic by the royal family's entire entourage of official cars, servants and flunkeys.

Because Gunung Ledang is worth saving, and worth fighting for.
Posted by ~CovertOperations78~ at 16:14

I am constantly horrified by how little countries like Malaysia have profited from the horrible mistakes we made in the West in the past.

i want to see you dance on that hilltop, Bollywood style.

Dear Ellen, Au and Target,
That's what we get when we have the same political party in power for too long. No check-and-balance, and no true democracy. Just plundering of the country's resources with impunity. Don't like it? Go back to China! Go back to India! Go back to the country where you came from!

I did do a Bollywood dance up there, but the birds and butterflies and mushrooms almost died laughing.

CO78.
We are fascinated by that Magnum fungus. Did you find out the scientific name?
We hope the rumours are just that - rumours! Can't imagine the wrath of the mythical princess if her abode is destroyed. I believe that all places like Gunung Ledang and Tanjung Tuan (to name a few) should be haunted. Then only all those bad intentions will be prevented. purrr...meow!

Reading about your trek up Mount Ophir reminded me of my trek in Rishikesh! That's the last 10k-trek-up-a-mountain I do!

I was saddened to read about the closure of the park. And I share your foreboding: it's always the worst-case-scenario that'll hold true, here in Malaysia.

Dear Kitties-In-Sydney,
I don't know who to ask so I never found out the name of the fungus.
When my friends and I first heard that the Johor royalty intends to construct a palace up in Gunung Ledang, we too hoped that the ghosts of Ledang would haunt and curse them until they could not get a wink of sleep and had to abandon their plans. That would be wonderful, indeed.

Dear Pat,
Rishikesh sounds exciting. I am going to go look it up now.
In this country, rumours hold more truth than the mainstream media. And the royals are the most callous, destructive and exploitative people of all. We can never expect to see Prince Charles' sense of stewardship in our local numbskulls.

Given that it must have been an arduous climb for you, it was a fantastic achievement for those seniors who participated!

Thanks, Louis! The seniors put the others to shame! Don't forget that only 13 of us did the full trek! Over 60 others, mostly fit young men and women, opted not to do the full trek and rode up in a 4x4 instead.

Erik Von Daniken may have known some truth. Else, how would all those jars of virginal weepings and mosquito hearts and whatever nots be carried up those slopes? Or maybe nobody has found the escalator on the morning side of the mountain?

Wonderful pics!That Magnum ice cream was my kids' one time favourite:) This senior says 'well done' to the senior climbers. When you and I are dressed in a saree, we can attempt to do a skip and a dance round my rambutan tree! LOL

Repeat after me:
O powers of the darkness
I summon you
Come to my aid
Banish all those do-badders
Keep them away from Mount Ophir
Jam their tractors, their trucks, their big bikes
Crumble their bricks, their concrete, their granite
Let the glory of the princess reign!!!!!

*psst do you think the Prince of Darkness hears my plea? purrr.....meow!

Dear Keats,
The senior climbers are mostly Hash runners and regular trekkers, so they are in better shape than us middle-aged desk potatoes! I couldn't tell a taichi apart from a lychee, but the seniors had admirable lung power and could even laugh and chat their way up the steep slopes, thanks to all their qigong and taichi training!

I am still learning how to tie my saree. Mine is all purple and gold and looks like a wedding saree! When I get it right, we can dance and sashay around your rambutan tree, with Robbie at our heels!

Dear Major,
It is my contention that it wasn't an extraterrestrial being that demanded the gifts of mosquito hearts and maiden's tears, but Elvis Presley (who may have left the building but not the mountain), a Yeti, a jack-o-lope and the Tooth Fairy, all working in cahoots with each other.

Dear Kitties-in-Sydney,
What an impressive and awesome spell! I recited it 3 times, so it should work! May their backhoe excavators and chainsaws be clogged with the poo and hairballs of a thousand cats!

Oh so THAT'S where our government learned of collaboration.....