The past month has been one continuous flurry of activity. I have been working really long hours despite my attempts to clear my backlog and my intention to spend less time at work. However, judging by the complexity of the cases I receive, it would be unfair and irresponsible not to spend more time on my assessments and on doing research. That Special Someone is of the opinion that the files came to me for a reason – the reason being that I have the ability, aptitude and passion to help those most in need of help. I like his theory and I hope to prove it correct.

Apart from work, I have been spending every weekend on volunteer work for the Malaysian Nature Society and for the SPCA, both in and outside the animal shelter. I had spent one of my days off, Thursday, 23rd Sept, coordinating an environment-centred Community Day at a welfare home for disabled and underprivileged children, and had later that night represented MNS and Global Animal Welfare Solutions at the MYZOO coalition forum on the welfare and protection of captive wildlife in Malaysia. I had spent another of my days off, Friday, 24th Sept, bathing and tickwashing dogs at the SPCA shelter before going off to climb Gunung Ledang.

With the upcoming SPCA World Animal Day Celebrations at our shelter on Sunday, 17th Oct, and a Volunteer Appreciation Weekend Campout for Malaysian Nature Society regular volunteers scheduled to take place on 4th – 5th December, there doesn’t seem to be much opportunity for rest. Even my obligatory Sundays back at the parental home are packed with housework, spring cleaning, spot cleaning and gardening projects.

During a recent meet-up with my buddy Rangamal, she averred that in order to do all that I do, I probably have 48 hours in a day, when other humans are afforded just 24. I beg to differ. I informed her that if I had 48 hours, I would be able to do an MBA, an English Literature, an LLM in International Law and maybe a B Sc in Veterinary Medicine.

Anecdotal evidence has it that most people lie on their deathbeds regretting all the things they never did when they were alive. If I keep up my current lifestyle, I will probably end up lying on my deathbed lamenting the fact that I could have done less, and rested more. 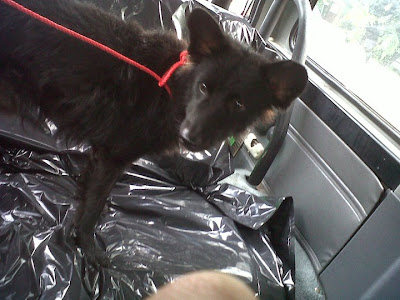 On Thursday, 30th Sept 2010, my buddy Melani spotted an injured dog lying near a road divider on the MEX Highway. As she was unable to stop her car to help the poor dog due to the high volume and speed of traffic, she called the SPCA emergency services for assistance. The SPCA, to their credit, arrived at the scene and picked up the dog with admirable promptness. When I called the SPCA to find out how the dog was, I learned that the dog had suffered hindquarter injuries and could hardly walk. The SPCA would have no choice but to euthanize him as they did not have the facilities to treat his injuries, and because they could not direct a large percentage of resources and manpower just to save one dog when there were hundreds under their care. Melani and I decided to take the dog under our care as it did not make sense to us to rescue a dog to have him put to sleep. Since he came to our attention, he would now be our ward. I drove like a rally driver to the SPCA to pick up the little dog for medical treatment, and was surprised and touched by what a sweet, affectionate and trusting little chap he is to let me pick him up and put him in my car (which he puked copiously in, but he really couldn’t help it, could he).

I brought the brave little dog, who Mel and I have since named “Bravo” for his courage and good nature in spite of the terrible pain he must be in, to my usual vet, Dr. Steven of Healing Pets Animal Clinic, Damansara Jaya. Upon an x-ray images being taken, we learned that Bravo had a complete fracture of the left leg and a fractured right hip. We agreed to put Bravo through surgery to fix the fractures and treat his injuries. Our plans are to allow Bravo to undergo surgery, treatment and boarding at the vet’s until the vet decides that he is fit to go home to receive home care, and after that, I will board him in my bachelor pad to save costs and in order that I may monitor his progress. Once Bravo is declared fit to go to a home, we will get him vaccinated and neutered and we will do our best to find him a good home. I believe this should not be difficult as he is a handsome, sweet-natured and intelligent little soul. Alternatively, we could try to trace his previous care providers (he was found wearing a collar) to find out what exactly happened. However, if we sense that Bravo had been neglected and would face more neglect if he were to return to his original caregivers, we would have serious reservations about letting him go back to the same people.

Financial assistance has been pouring in from our kind and generous friends, and Bravo successfully underwent surgery on his fractured leg on 7th Oct 2010 after the good doctor had determined that Bravo’s condition was finally stable enough to endure a major surgery. I visit Bravo as often as I can and bring him vitamins and supplements to aid his recovery.

Bravo could have been just another canine casualty of speeding traffic, but everything in the Universe helped him pull through. If he hadn’t been spotted by Mel, if our SPCA ambulance driver Samy had not acted quickly and sensibly, if I hadn’t gone to pick him up immediately after hearing of his injuries and if our Project Second Chance donors aren’t as giving and big-hearted – then we probably would have lost Bravo. And for that, Bravo, Mel, Project Second Chance and I thank you – the kind people who donate to the SPCA to ensure we could pay the salaries of caring and competent staff like Samy; the capable and sympathetic vets out there who make it their duty to rescue first and discuss bills and funds later; the good friends who trust me enough to contribute to Project Second Chance – our gratitude for you cannot be expressed in mere words.

As 4th October was World Animal Day, let us also take a moment to renew our pledges to drive carefully and mindfully in order to avoid harm to the animals that share our roads and neighbourhood and to provide all the assistance we can to animals harmed by traffic and people.

Happy Belated World Animal Day, with love from Bravo and all of us at Project Second Chance.

Our office had its annual teambuilding workshop and costume ball on Friday, 1st October 2010, which we had all looked forward to. I find the teambuilding and Code of Conduct refresher sessions unnecessary as we like and respect each other and are friends in and outside the office, but then again, it could be just my opinion. Still, as the photos below attest, we had a welcome break from work and enjoyed our little soiree in the evening. 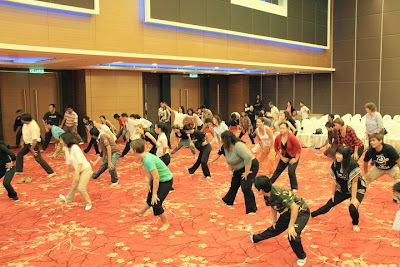 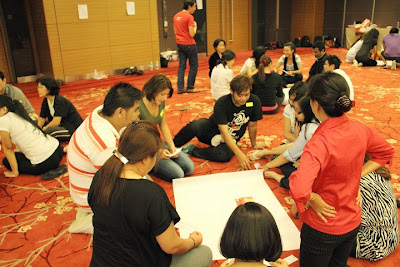 Games that focus on cooperation and collaboration were the order of the day. 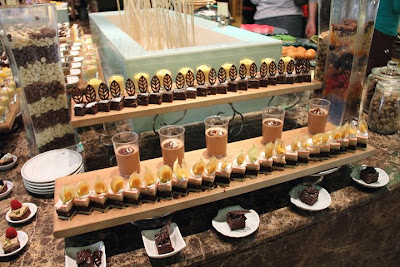 A tantalising array of desserts during lunch to prevent us from fitting into our party dresses later in the evening.

The affirmation session brought us all big smiles and the warm fuzzies. The costume ball was a riot. Assorted flapper girls, Bollywood beauties, and movie and fairytale characters added an element of glamour and fun. 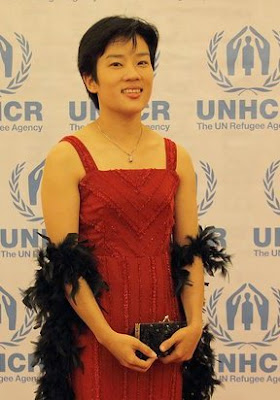 I came as a jazz diva. 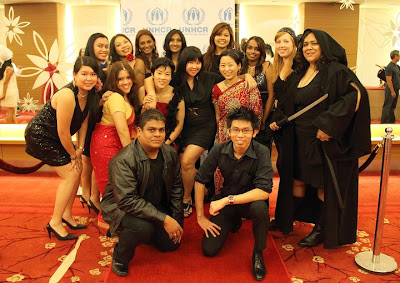 It looks like my unit has adopted the theme of Bollywood-meets-Gothic-Chic-meets-Sci-Fi.

So long and until we meet again at work on Monday!
Posted by ~CovertOperations78~ at 05:07

Excuse me while I stagger back as I see you IN A DRESS! And looking lovely! Quite a change from practical you.

Hope Bravo does well. And yes, I agree with the special one that you get those cases because you are so thorough. That's why we like you. Purrs from Au and Target...

Wow! all those gorgeous ladies. Must be a hilarious event eh!

Bravo! Bravo! Encore! Encore! soooorrry....can't help it when I saw the name you gave that sweet canine. May he live happily ever after and find a forever home soon. purrrr....meow!

Dear Au, Target and Ellen,
Thank you for coming over. Bravo is doing better. I have put him on Nutrigel to improve his appetite. He is not eating as much as I would like him to. I would like to think that I am thorough in my work too, but there's lots of room for improvement. Let's meet up soon.

Thank you for coming over. My office is full of lovely ladies. The men are very lucky as they don't have much reason to feel bored. It was an evening filled with laughter.

Bravo thanks you for your kind wishes. We too hope to find him a wonderful and loving home, where it won't matter too much if he walks a bit funny and doesn't have such strong hips.
The Lady In Red here is back in camouflage and football jerseys. So much for everyone's request to see me in a dress more often!

Had I been a member of your staff I would have volunteered to guard the desserts and at great self-sacrifice skipped the muay thai session.

I read it all, but I only remember the story of Bravo. I hope he's doing well. I am sending good vibes into the universe for him: so that he heals perfectly, and later, someone calls and falls madly in love with him, and takes him home!

Dear Louis,
But if you were to do that, all the ladies who DID undergo the Muay Thai training would fight you (and I mean physically!) for the right to "guard" the desserts! :D

Dear Pat,
Thank you for your concern. Little Bravo feels your love. Just keep praying for his recovery. Dr. Steven and I will do the rest. I have suggested adding canned cat food to his Eukanuba to entice him to eat. The vet's assistant tells me it's working so far. The Nutrigel is helping too. I am going to get doggie Glucosamine and Calcium supplements for him next.
Take care, and keep the faith. That's all we need.

Can you cook too?

Erm, what a random question, with a complex answer. Can I cook? I used to be quite a good cook in my teens, but I don't cook much nowadays, living in a bachelor pad with no stove, as I do. I just pack my own lunches to work, and cook microwave meals like pita-base pizza and 5-ingredient pasta and salsa rice.

You need me to do any cooking?

Lovely you in that outfit! The colour suits you too:) Hey, do coach me a few moves of the muay thai when we meet up -never know when it'll come in handy with crime on the streets.

Dear Keats,
I'd be glad to teach you Muay Thai the next time we meet! You just have to use your elbows, fists and knees a lot!
You really think I look good in red and black? Thank you! I was afraid I would look like a shooting practice target board!