Letter to the Editor: Aggressive macaque merely adapting to its environment

Letter to the Editor: Aggressive macaque merely adapting to its environment 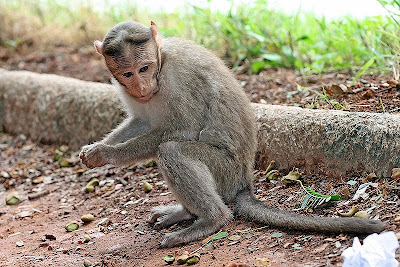 I read with deep concern your reports, "Baby could have been mistaken for pet’s offspring" (Oct 8) and "Killer macaque still alive" (Oct 8).

Despite all the advice provided by environmental and animal welfare NGOs and the Wildlife and National Parks Department against the feeding and taunting of macaques and the keeping of macaques as pets, Malaysians continue to feed, tease or keep macaques while conveniently ignoring the fact that macaques are wild animals. We must remember that we can neither predict nor control the natural behaviours of wild animals.

Feeding macaques causes them to lose their fear of humans and see people and even automobiles as a source of food. Many macaques become casualties of road accidents because they venture too close to roads and highways, expecting handouts from cars. Teasing and playing with macaques may cause them to become aggressive, especially when they are cornered or when they feel threatened by direct eye contact. Urban macaques develop behavioural traits such as aggression towards humans, a very low fear of humans and scavenging in rubbish dumps (a potential source for contagious infections) to adapt to living near human habitation.

Shooting a rogue macaque is not a long-term solution to the problem of macaque aggression. As indicated by the news report, the male macaque may have been attracted to human homes due to the presence of a female macaque that was in captivity. Wild animals respond to stimuli such as the presence of food, threats, prey, predators and mates. As can be seen from attempts to control the population of other stray and feral animals such as dogs, shooting a dominant male animal is not a solution to the problem of aggressive behaviour and animal attacks, as another male in the pack will merely become more dominant and aggressive to fill the void created by the elimination of the alpha male. As long as humans continue feeding feral macaques and keeping macaques as pets (especially in areas with an existing macaque population), macaques will continue to breed and display adaptive and aggressive behaviour. As indicated in the report, "Bereaved mum fears again as macaques show up" (Oct 13), after Perhilitan had shot the macaque that was believed to be the one that had killed the unfortunate infant, other larger, more aggressive macaques began to show up in the area.

While I feel immense sympathy and sorrow for the bereaved family, for the reasons stated above, I believe shooting and culling to be actions which are ineffective at best, and downright harmful at worst. Malaysians must remember that the macaque population in urban areas became a problem due to human encroachment into macaque habitat, and our poor hygiene and waste management habits, which emboldened macaques to raid rubbish bins and enter human homes.

More practical long-term solutions to the issues of macaque aggression and overpopulation are to stop feeding, taunting or breeding macaques, to stop littering and to dispose of rubbish in secure receptacles. Further, captive and captured macaques can be sterilised to reduce aggressive behaviour and to control their population. Male macaques can undergo vasectomy while female macaques can undergo tubectomy, as both processes keep organs and hormones intact, which will help released macaques retain social skills and social hierarchies in their groups. Other prescriptions may involve the relocation of urban macaques. However, all relocation plans should cover habitat assessment and follow-up monitoring.

Labels: Letters to the Editor, Wildlife

CO78,
What is the world coming to? My heart bleeds for the human baby and the macaques. purrr...meow!

Ee Lynn it's been said and said and said but people are just plain stupid when it comes to understanding and living near animals. A tragedy waiting to happen. And now the revenge taken by idiot people is going to make things worse.

I trust that readers will not, as they often do, misinterpret your letter as lacking in sympathy for the victim and her family, or as implicating them in the improper interactions between people and wild animals. You are doing all potential victims a great service by again drawing attention to the ill-advised practices that lead to such tragedies. At the same time you suggest enlightened ways to prevent the proliferation of wild animals in habitats encroached on by development.

In Malaysia, "Dog's Law" applies. You wait for the dog to make a mistake and then you punish him for it. You don't take measures to prevent the mistake from happening in the first place.

So far, there has been no such implication. This is partly because the wildlife experts have said pretty much the same thing as what I recommended (so it's no longer a great big new discovery to anyone) and partly because society knows that it is collectively to blame for the death of the innocent child.

My friend says monkeys are fearless in her neighourhood after they have had their habitat disturbed. Now they are seen in large numbers in the children's playground and climbing all over telegraph wires and roof tops, toppling rubbish bins,etc. That's the penalty for the eco -disturbance. I will follow up and ask how the problem is being handled.

As usual, people don't see the reason why this is happening, and a knee-jerk reaction holds sway.

I hope they'll hear your voice - for as usual, you have such wise advice.

Dear Keats,
To a monkey, a telephone pole is not much different from a tall tree. It's up to us to keep their environment safe for them when we encroach into their habitat. However, people treat monkeys as though they are nothing more than clever little entertainers. People feed them with inappropriate things like potato crisps and candy and say "what's wrong with feeding them?" and "poor things, they look hungry". They think it's cute when monkeys eat human junk food. It's not so cute to see monkeys falling sick, choking on sweets, plastic bags or styrofoam food packets and getting cut or injured by broken bottles and cans. Humans must wise up. Feeding animals is not a way of helping them. Retaining green lungs, connecting strips and buffer zones of greenery, and cultivating indigenous fruiting trees, are better solutions.

Dear Pat,
The Malaysian way of doing things is to shoot any animal that has attacked a human being, without looking at the cause or reason. In the end, there will be nothing left -- no dogs, elephants, tigers, macaques or rhinos -- and then humans will turn on each other. I don't for a moment believe that we are in any way smarter than animals or plants.

Hi CO'78
Read your letter in the online edition of The Star tonight (my time). It should now raise the awareness of many more people.

Thanks, Louis! I certainly hope so too. Just 2 days before my letter was published, one of those incorrigible do-gooders wrote in and complained that it was unkind not to feed monkeys. I don't think it's an act of kindness to give macaques chips, candy and soda. We at the SPCA are working on a full statement on the whole issue of macaque overpopulation and aggression. Guess whose shoulders the task falls on, then?