A pictorial update on the fortnight that was: 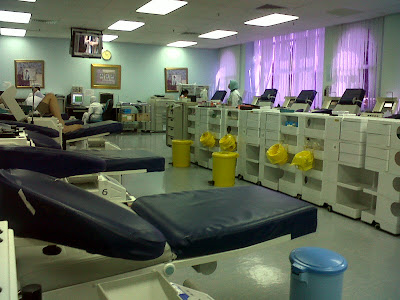 My last whole blood donation was on Tuesday, 12th October 2010. As you can see, it was a quiet afternoon at the National Blood Bank. I often wonder if the National Blood Bank is just another white elephant. Valuable though its services undoubtedly are, I imagine that the costs, both financial and environmental, of managing and operating such a large but under-utilised facility must be rather considerable. Perhaps it would make more sense for the Ministry of Health to improve the blood donation facilities in major government hospitals, and focus on developing a fleet of well-managed and well-equipped mobile blood donation units that could be deployed to malls, institutions and offices for Corporate Social Responsibility initiatives on a regular basis. 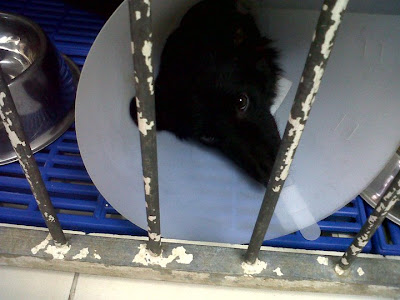 Bravo was resting in his boarding kennel at the vet's when I visited him on 9th October, 2010. 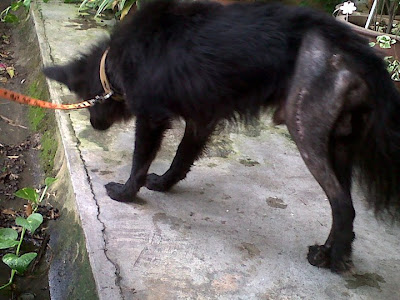 Bravo was discharged and declared ready to go home with me on Saturday, 23rd October 2010. He will live with me at the Bachelor Pad for the next 1-2 months until he makes a full recovery, after which we will try to trace his previous care providers, or alternatively, find him a good home. As you can see, there are metal pins sticking out of the surgery site on Bravo's left leg. It will take an estimated 1-2 more months for the fracture to heal. 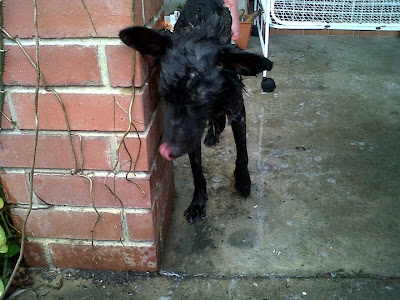 Bravo has his first bath in ages. I had to be careful not to touch the metal pins in his leg while washing him. The vegetarian restaurants in my area have agreed to let me have their leftover cooked white rice for Bravo every evening, while my workmates have been contributing canned dog food, as Bravo does not eat kibbles. Since my priority now is to help Bravo gain weight and recover from his injuries rather than to change his dietary habits, I am giving him what he WILL eat, rather than starve him into eating kibbles (which is not foreseaable, anyway). Thank you to all our kind and generous friends whose contributions helped pay for Bravo's surgery and treatment. 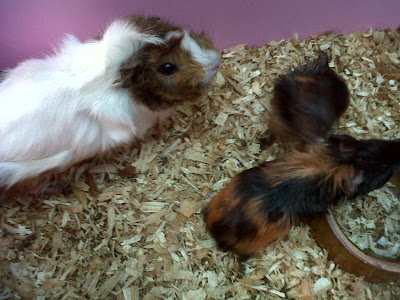 There were 6 guinea pigs for adoption at the SPCA Animal Shelter when I was there on Saturday, 23rd Oct 2010. I found them so attractive and engaging that I kept going over to look at them in between bathing and tickwashing dogs and cleaning the kennels and catteries. However, I don't think the Rowdies would be good company for the guinea pigs, so I will not be able to adopt them. 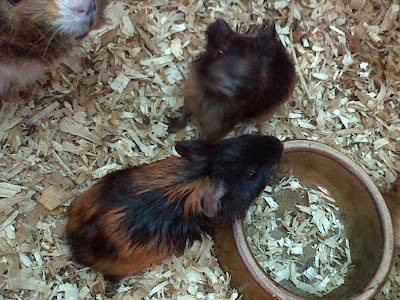 Please help us spread the word to others who may be able to provide the guinea pigs with a good home. Guinea pigs are suited to living in apartments and small homes. They eliminate waste less frequently and in lower volumes than rabbits, are easy to feed and clean up after, and are vocal and sociable. With proper care, guinea pigs can live up to 7 years. 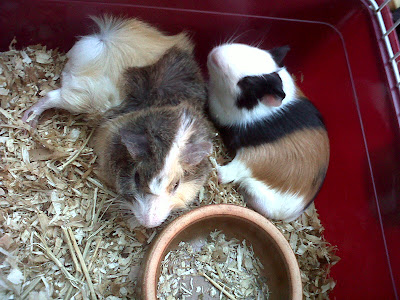 Guinea pigs with tufted hair are known as Abyssinians, although there is no reason to believe that they originate from Ethiopia or Eritrea, or that they live in abysses. I find the smooth-coated guinea pigs just as visually attractive as the Abyssinians. I wish I could bring all of them home without the risk of the Rowdies sending their rodent housemates into cardiac arrest. 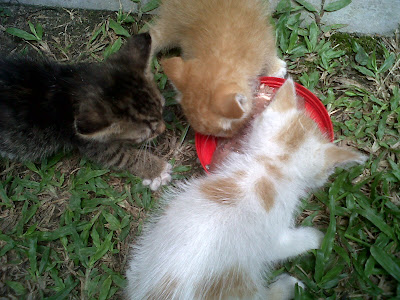 These 3 semi-feral kittens were born in my office sometime last month. We have determined that they are the kittens of Gangster Mama, an orange-and-white tabby with an attitude, who I am still trying to capture for spaying. I am feeding them kitten food with deworming syrup mixed into the food, in the recommended doses for kittens their weight. My next step is to get them vaccinated, neutered and rehomed. Friends of my friends have already expressed interest in adopting rescued animals from me, and I consider that an enormous blessing. However, these 3 kittens are not properly socialised yet and growled like dogs when I tried to move their food bowl into the shade. That made me laugh so hard that I moved the bowl again just to hear them snarl.
Posted by ~CovertOperations78~ at 02:41

CO78,
LOL! Kittens who growl like dogs? Hilarious... OTOH, those guinea pigs look so delectable. The masterchef in me thinking....satay? BBQ? rendang? drool...bad bad Angelina. Yeah...your rowdies will behave just like me. purrr....meow!

I used to have guinea pigs; they're so sweet but you've got to be careful as they bond very strongly to their owners. If only 1 person takes care of them, and that person goes on holiday or college, the guinea pigs may pine - and die.

Au has volunteered to take them in. I've said no.

Dear Kitties-in-Sydney,
Oh, you guys are just as bad as my Rowdies! The poor guinea pigs will go into cardiac arrest with you guys peering at them through the bars of the enclosure!
The growling kittens are growing bigger and stronger by the day. I am letting their Mama teach them street skills before I take them away from her at 3 months or so.

I didn't know that guinea pigs bond with just one person! We've had guinea pigs at the SPCA before, and I successfully rehomed them with friends. The piggies were happy to accept food from just about anyone. They lived for a good many years. I would send them an apple and a carrot each on their Gotcha Days or on Christmas Day.

Bravo is a beautiful dog, and I'm sure someone will take him. If he wasn't a he, I'd be tempted... but don't tell Chuan ;)

Dear Pat,
I am keeping my fingers crossed that Bravo's people will be found and they will want him back wholeheartedly. He seems to me to have come from a loving home, as he is loving, affectionate and well-trained. Fingers crossed.
Failing which, we will give Chuan sad puppy faces, okay? We rope in Larnee to help.

The kitties seem to have gone missing. Our canteen fellas saw our interpreters and interns bringing the kittens home. I will send out a group email about vaccination and neutering and get the kitties and their mama fixed ASAP. The cats are popping kittens every few weeks over here. It's like a cat farm here in my office.

Bloobmobiles are a great idea. I often see them parked at shopping malls, large office complexes and other places with high concentrations of working people. People are more likely to donate blood if they don't have to give up their work time or make a special trip with all the inconvenience that involves sometimes.

Dear Louis,
You are right. People find it easier to contribute when not put at inconvenience. Also, out of sight, out of mind. Animal rescue groups and shelters in Malaysia learned from this, and hold adoption and awareness booths in shopping malls and neighbourhood parks during the weekends and holidays. This improved the chances of animals seeking good homes so much.