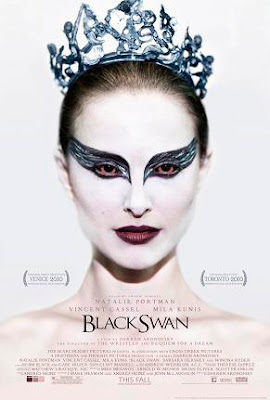 (Promotional movie poster reproduced without permission but in accordance with the principles of fair use.)

When we internalise our insecurities, do they remain merely as unspoken fears, or do they grow, evolve and develop lives of their own? Can our anxieties take on physical forms and become something menacing, sinister and destructive?

Enter the competitive and neuroses-inducing world of professional ballet.

Natalie Portman is exquisite in her role as Nina Sayers, the overprotected, highly-strung, fragile ballet dancer who “just wants to be perfect”. As the innocent, fearful, conflicted White Swan, Portman is consummate; but it is her portrayal of the sensual, fiendish Black Swan that makes one realise her depth as an actress.

Nina Sayers’ descent into insanity is revealed to us not in the form of subtle clues, but in flashing red lights and sirens that scream “Nutjob!”, “Mental Case!” and “Fruitcake!” From her bulimia, displays of obsessive-compulsive behaviour, kleptomania and nervous habits of scratching herself and biting her nails, to the fact that she is unable to grow up and move out of her oppressively pink bedroom, we understand, with a good dose of dramatic irony, that Nina is a far more troubled young person than the people around her realise. The “sweet girl”, under pressure to be compliant and technically precise on the one hand and to let her emotions out on the other, is just a tragedy waiting to happen.

What makes Black Swan such an effective and compelling psychological thriller is also the characterisation of the other supporting players in this drama. Barbara Hershey is both exasperating, creepy and, at the same time, pitiable, as the hovering single mother obsessed with her daughter’s career and personal life. Mila Kunis is charming and believable as the reckless, confident, forthcoming and seductive Lily, embodying everything that Nina is not. Winona Ryder is unrecognisable as the bitter, rejected erstwhile Swan Queen. But it is Vincent Cassel’s assumption of the role of the passionate, masterly and hot-blooded artistic director, Thomas Leroy, that delighted me the most. With Cassel, you simply cannot dismiss the liberties he takes with his female protégées as sexual harassment or old-fashioned sleaze. Instead, you think, “He’s French! He’s an artist! He’s brilliant!”

Ultimately, this is what makes Black Swan such a winner – all the characters come together to deliver a Kafkaesque fantasy that titillates, provokes, horrifies and discomposes.

Weekly Roundup In Prose and Pictures:

And so, being on schedule at work, I took Friday afternoon off to take the parents out to a movie and dinner. We enjoyed Black Swan so much that we discussed it all through tea.

“Don’t see why her mother had to overreact and threaten to dump the whole cake in the trash”, averred Covert Mum, referring to a scene in the movie. “She could have just cut it up and put it in Tupperware and given some to the neighbours, the cleaning lady, the gardener and the postman.”

“That’s because she’s not Asian and pragmatic like you, Mum”, I pointed out. “Moral of the story is that if you do too much ballet, you turn into an Angry Bird”. 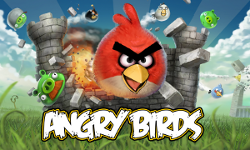 This is a sly dig at the fact that I had to endure 2 months of ballet lessons when I was 8. From what I could recall of my childhood, I had declined when my parents asked me if I wanted to take up piano, because lessons were expensive, we couldn’t afford a piano for me to practice on, and it just sounded like too much hard work. However, for some strange reason, I was talked into trying out ballet because someone had outgrown her outfit and was willing to give it to me, the lessons were inexpensive and I had a few other friends in ballet class. I was so hopeless at it that it was a relief to everyone when I decided to quit, a decision that was wholeheartedly supported by my parents. For the record, I didn’t manage to do a split until I took up taekwondo at 13, so ballet couldn’t have made any lasting impact on my flexibility or agility.

“No, the moral of the story is that one should never strive for perfection,” advised Covert Mum. “You do understand that, don’t you?” Covert Dad queried. I looked up from my French toast in surprise. “Don’t you think you push yourself too hard all the time?” Covert Dad wanted to know. It was like being interrogated by the LTTE, where only one answer is acceptable to your inquisitors. Why would my parents think that their trash-talking, tone-deaf, clumsy, free-spirited ragamuffin of a daughter strives to be perfect? “Disagree,” I asserted, reaching for more butter and syrup. “I would be happy to be reasonably competent and even-tempered. Not perfect.” How little my parents understand me, if they think that my happy bustle of activities and achievements is an attempt at perfection, if they think that my packed schedule is a substitute for some other void in my life!

Moseyed around the shops and department stores a bit before I saw the parents off. It was a rainy Friday evening, and the weekend has just begun. Life is good, it really is. 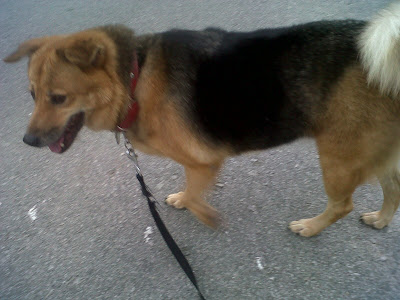 My canine sibling, Amber, now lives with me at the bachelor pad because she and Chocky no longer get along. She is thrilled that she gets to go on walks with me twice a day. I am pleased to receive the news from Anthony that Bravo is now a loved family member. Now all I have to do is to collect Bravo’s vaccination and neutering records from the vet so that Anthony can apply for a dog licence for Bravo. 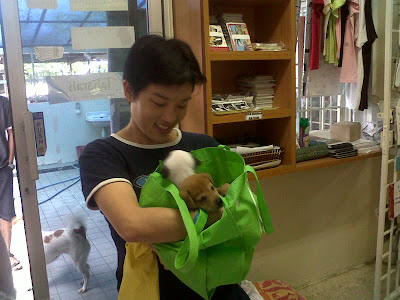 Saturday was a busy day at the SPCA shelter, as our Jumble Sale was to take place in the shelter premises the following morning. I was kept busy all afternoon with animal care work, briefing the new volunteers and cleaning the shelter. Rose and I managed to bathe and tickwash all the dogs in Maternity Kennels 1 & 2 and the Pound. Here I am, on my way to transfer two rescued puppies into a kennel with 2 other recent arrivals. 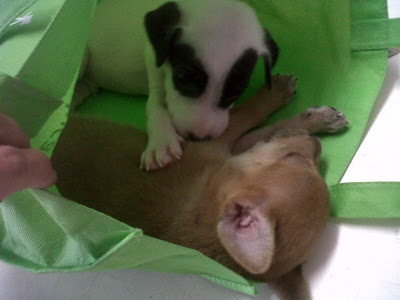 A closer look at the two puppies. The panda one is the more robust of the two. I pray that they find good homes soon. If the vets are of the opinion that they should be fostered for another week or two, I would be happy to take them in to improve their chances of survival and rehoming. Amber will just have to learn to share me with other animals. 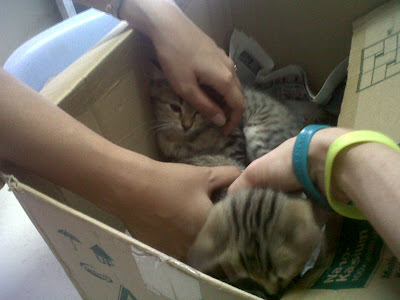 Adoption rates have been stable, and Saturday was an extraordinarily good day for adoption, as 15 cats and dogs found homes. Some adopters have sensibly decided to adopt two of a set of siblings so that the animals can keep each other company. A young couple adopted this cheeky feline pair, and I helped them ensure that the kittens remained inside the box until they got to their car, as they had forgotten to bring their pet carrier with them. 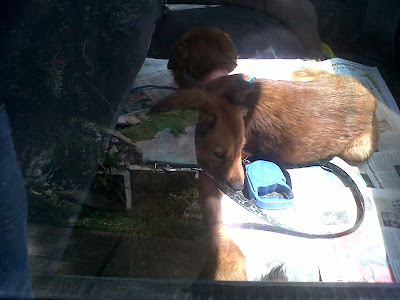 The animals go home two-by-two, hurrah, hurrah. A senior couple turned a personal tragedy into an opportunity to do a good deed by adopting this otherwise-forgotten pair of dogs from Kennels A. Their own dog went missing shortly before the Chinese New Year holidays, and they had come to the SPCA to put up Missing Dog flyers. They decided to adopt two adult dogs from the shelter, and so this pair of siblings was given a chance to live a better life with the kind couple. “And if your missing dog returns?” I asked them. “If she returns, we would of course welcome her home with open arms,” they declared. The couple was kind enough to grant me permission to say goodbye to the two doggies and to take a photo of them through the car window. Goodbye and good luck, sweeties!
Posted by ~CovertOperations78~ at 16:48

CO78,
If only my other siblings can tolerate canines, I'd like to adopt Panda and sibling.....hehehe...wishful thinking! purrr....meow!

Dear Kitties-In-Sydney,
How good of you to wish to adopt the puppies! I understand not all of us are able to, even if we would like to, adopt and help all the needy animals that come our way. I pray the puppies have found homes by now. We always get a lot of visitors on Jumble Sale days and many animals find homes then.

Dear Ili,
Hurray, you'll be back soon! How strange it would seem for you, to go from winter clothes and snowboarding, to heat, humidity and familiar faces and foods, within the same day. Looking forward to meeting up. Please come take part in our competitions during RWW.

'Black swan' will be something I won't miss now. Thanks for the review. I just heard that she won the Oscar for best actress - and going by your review, sounds like she deserved it :)

What a wonderful encounter with your parents! Looking at it from a parent's perspective it is sheer fulfillment when a parent-son/daughter relationship matures into an adult-adult one. That transformation takes place because of good earlier nurturing all around. Congratulations to you and your parents.

Dear Pat,
Please do watch "Black Swan"! It is so mind-blowingly good! Every Award it received is a well-deserved one. Natalie Portman for the win!

Dear Louis,
My parents are exasperating. But then again, all parents are. Mothers especially. Mothers are people who make you put on a sweater because THEY are feeling cold. I suppose 20 years from now, my children will be saying the same thing about me. I can imagine what an exasperating mother I will be.

Dear Keats,
So glad Natalie Portman won! She deserves it! I have been a fan since she made her debut in "The Professional" -- she is so talented, even as a child! Happy to hear that you and Ravi will be going to watch Black Swan. Definitely a better choice than a bunch of exciting 3D nonsense. The SPCA Jumble Sale can be a fun place to source for books. I even got a big cat tower from the sale. Cleaned it up with a rag, some Dettol and some Febreeze, and the cats were happy to have it!

I really appreciate your effort at SPCA. Keep it up. If we can have more people with such awareness like you ...the world would be a better place my dear .....good job

Dear Abang Rizal,
Thank you for your support! We all do what we can. Many animal-lovers are not affiliated with any animal welfare organisation but carry out their own dog and cat rescue work in their own neighbourhoods. Animal rights and human rights aren't mutually exclusive -- it's not a matter of choosing one over the other. All lives have worth. And animals and humans can help one another.

BlackSwan was awesome!!!! But gosh was horrible at the same time! Not to mention my mom wouldn't stop telling off sayin "STOP DOING THAT!!!" when it was just a movie! LOL but yea it touched my heart. I've always seen the actual musical in either in England or in Thailand. It seriously beautiful!!! I can't believe the movie has managed to bring that out too! =D And yes the adoptions was incredible!!! I couldn't believe Chelvy when she told me! It sure is a happy day! ;-)

wait not in musical. I meant the performance in ballet! lol!!

Dear Amelia,
LOL @ your mother saying "Stop Doing That!" to Natalie Portman! It's a Mum Thing, you wouldn't understand!

I'm not particularly crazy over watching ballet, but let's get together to watch French movies sometime! I have loads of Jean Reno and Gerard Depardieu stuff, haha!

Oh and by the way, please fix your blog comment form, it's not letting me leave a comment.