Love Is The Answer 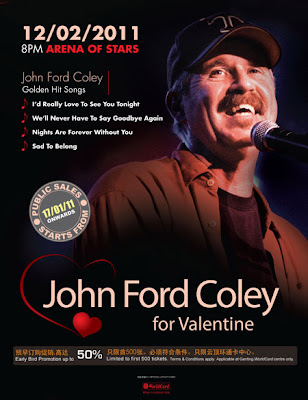 “Light of the world, shine on me
Love is the answer”
~ England Dan and John Ford Coley, “Love Is The Answer”

In my youth, I have always been a rare one for participating in competitions. As I approached my 30s, I ceased submitting entries for slogan-writing and other such contests for a very sensible reason – I didn’t know what to do with the prizes anymore. Almost all the prizes offered consist of merchandise I have not much use for, vacations that I never have the time to take, and tickets to events on weekends that are already packed with volunteer commitments. Looking for last-minute takers for the prizes became more than a minor annoyance and after several vouchers and hotel stays expired unnoticed and unmourned, I decided to take a break from taking part in contests.

My last two weekends, however, were unusual in that they were not packed with some frenetic activity with an immutable date and deadline. The parental home had been cleaned so vigorously that it could pass any white-glove test, the SPCA shelter had been scrubbed and disinfected and the neediest dogs have been bathed and tickwashed, my own Rowdies have been bathed and dewormed, our rescued dog Bravo has found a loving home with Anthony and family (thank you, dear Tony!), my work is ahead of schedule and all the necessary documents and correspondence I needed to produce for various organisations have been drafted.

And so when I saw a newspaper slogan-writing contest giving away tickets to John Ford Coley’s concert at the Genting Arena of Stars, I jumped at the opportunity to see one of my favourite singers in the flesh. The tickets I won were originally intended for my buddy Nicole and me, but due to some pressing family commitments, Nicole had to regretfully decline. With a heavy heart, I invited other friends to be my partner and guest. There was no shortage of England Dan & John Ford Coley fans and I finally settled for my friend and fellow volunteer Shyam. I have not been to Genting Highlands, Pahang , since 1991 and was really quite grateful when Shyam offered to drive. To save on costs, we decided to pack a picnic and camping gear and camp out in the car. Shyam packed spicy noodles and a guava, while I brought papaya, mandarin oranges, soda, sweets and munchies. And though I missed Nicole all weekend, Shyam provided good company and the weekend turned out to be a memorable one. 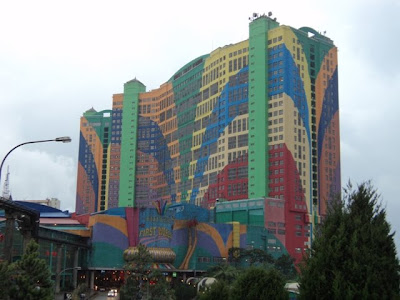 We parked at the open air car park in front of the unmistakable First World Hotel, which looks as though it had engaged Jackson Pollock as a colour and design consultant. 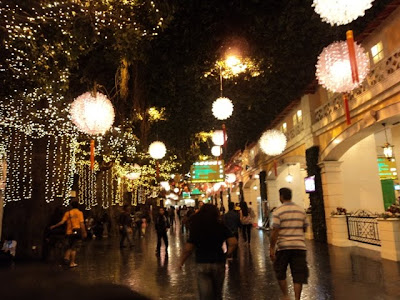 This is the lobby of the First World Hotel, with decorative lighting made of reused PET bottles. Too bad they didn't put in as much effort into reducing energy use.

A video I took on my Blackberry of John Ford Coley performing “Soldier In The Rain”. He also performed other ED & JFC staples such as “I’d Really Love To See You Tonight” and “Sad To Belong”, as well as non-ED & JFC numbers such as Bread’s “If”, Dan Hill’s “Sometimes When We Touch”, and Phil Medley and Bert Berns’ “Twist and Shout”.

The audience was a largely middle-aged crowd but none were as loud and appreciative as Shyam and me. 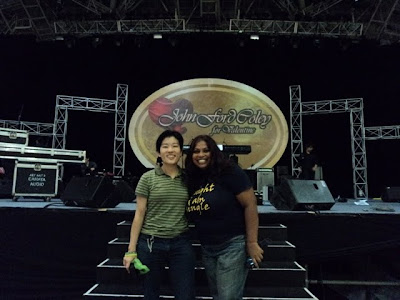 Shyam and I posing in front of the stage after the concert, with the kind permission of the staff of Resorts World Genting. 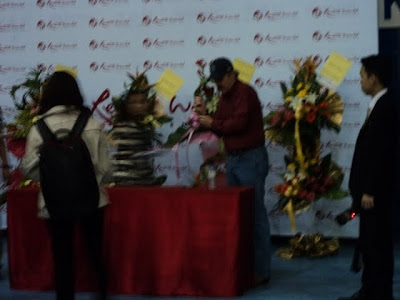 Mr. Coley signing autographs for his fans. The queue snaked all the way up the stairs. They had run out of CDs by the time I got there. 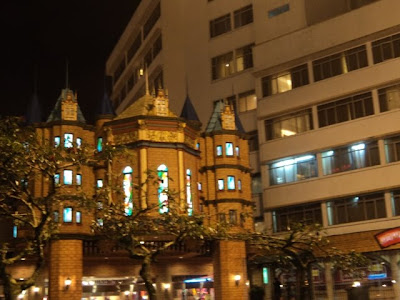 I was too macho to bring a jacket and was shivering with cold when I saw this palace-like facade to one of the commercial establishments. We ended up drinking hot coffee and watching the Man Utd vs. Man City match at a canteen for cabbies and bus drivers. 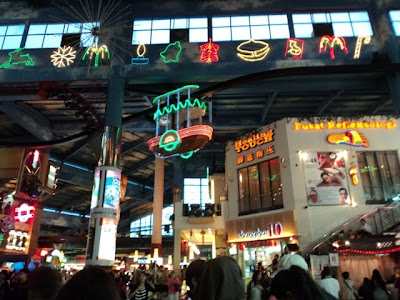 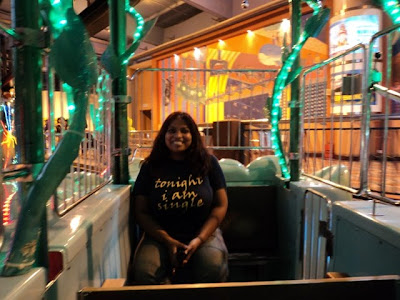 Shyam riding the Rio Float with me at the First World Hotel indoor theme park after the concert because I wanted to take some aerial-view photos. 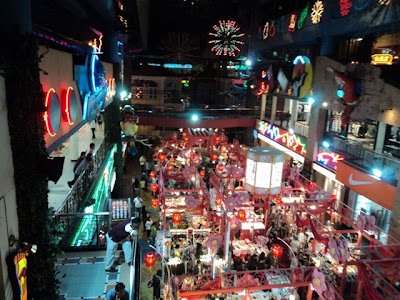 An aerial view of part of the indoor theme park, which is still very much in the Chinese New Year mood. 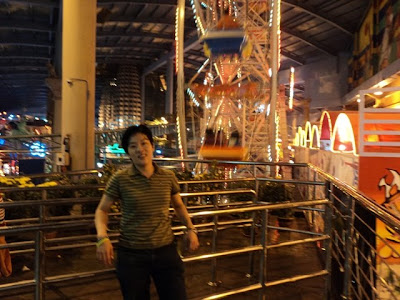 I’ve always loved Ferris Wheels. They are sturdy, old-fashioned and predictable, just like me, and don’t spin off their axles and perform infarction-inducing corkscrews and 360-degree loops. 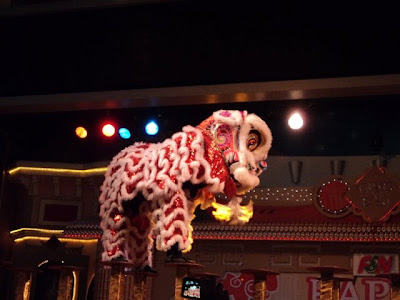 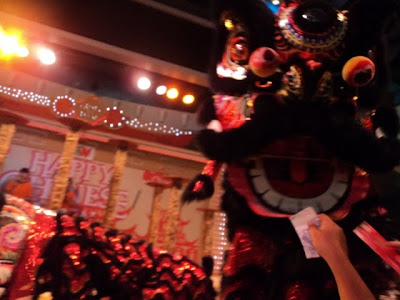 The black lions came forward to receive "lai see" from members of the audience.
Here, Lion! Good Lion! Here, take the cash!
I told Shyam that it is good luck if the lion accepts money from you and gives you a token of appreciation (usually just orange segments) in return, and that you're supposed to stroke the lion's mane and beard for luck. 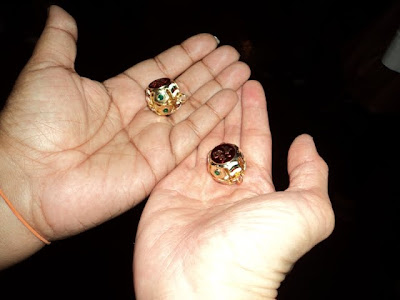 The "Fu" fortune charms that Shyam and I received from the lions.


I wonder what fortunes and adventures await me in the Year of the Rabbit! Perhaps more concerts, thanks to the generosity of sponsors like Resorts World Genting, and perhaps fewer weekends spent oscillating from one hectic activity to another. And maybe, just maybe, I’d get to meet Mr. Coley again.
Posted by ~CovertOperations78~ at 04:40

That ticket couldn't have gone to a more deserving person, E. Are you planning any contest-entering for Michael Bublé?! He's here in March. I'd volunteer if you're looking for someone for that extra ticket you win! ;)

Been soooo long since I went up to Genting. Thanx for sharing those colourful pics!

The year of the rabbit will see U rescuing rabbits too, erkkkk???

I am so happy for you. Congratulations too. As Pat remarked, couldn't have happened to amore deserving person.

Thanks for your kind words, Pat! Are there any Michael Buble slogan-writing competitions, then? If so, please forward the details to me! We will go have fun together!

Dear Ahan,
I hope I have the opportunity to watch more concerts in Genting or elsewhere, although I am sure nature-lovers like us won't have Genting high on our must-visit destinations! Still, it's a bit of mindless fun. I hope I won't have to rescue any more animals, rabbits or otherwise, this year. I hope people will take good care of all their animals and not dump their animals.

Dear Louis,
How very kind of you to be happy for my bit of good luck! I did have fun, and my friend Shyam did too!

Oh No! Why did I write England Dan instead of John Foley? Must have been thinking of him. OK OK...let's go "sway" with Buble....ooohhh....he's so dishy. purrr....meow!

I ADORE this man's music! It's the stuff that was on the radio while I was growing up. Every kid had a transistor radio when I was a kid. We were partial to the rainbow colored ones with wrist straps and the nifty Panasonics that could be worn as very large bracelets. Heck, I even had one that was built into a furry, stuffed version of Lady from "Lady and the Tramp!" Now they are so small as to be included in MP3 players that are as small as flash drives. We couldn't have imagined a radio smaller than a deck of cards back then. Oh, and we only had one earphone, but that was OK because the radios were monophonic-- not stereo.

"I'm not talkin' 'bout movin' in,
And I don't wanna change your life,
But there's a warm wind blowin' the stars around,
And I'd really love to see you tonight."

Oh yeah! I still remember all the words more than 30 years later! Go me!

Cali, how good of you to drop by! I didn't realise you were still reading me! Yes, this is the type of music that most of us grew up on in the 70s, wasn't it? And the lyrics of "I'd really love to see you tonight" just bring back so many memories of loves that we've had and lost, relationships that just trickled into normal friendships, nights spent outdoors with that Special Someone, just watching the stars and talking about life...

Congratulations. The next time I'm planning to enter such competition, I know who to look for ..:)

Congrates! That was a nice break to see your one of your favourite guys. Perhaps the call of the highlands was too strong to resist after all these years!! Ha! ha!

Dear Abang Rizal,
Thank you for sharing my happiness! I love taking part in contests -- the participating part is more than half the fun!

Dear Keats,
Thank you for your kind words. I did enjoy the break, although I wouldn't have chosen Genting for a vacation otherwise -- too noisy, crowded, commercialised and expensive!

Of course I still read your blog, my dear friend! I just usually read on my Google Reader aggregator. I only come by when I feel I have something to say.

Good news: I have puppies in the house! I have my chihuahua, Jethro, and Kendall's chihuahua/pug, Ellie May, and Kendall's fiancee's cousin's (got that?) chihuahua/dachshund, Lola. I love that little Lola's name has a sense of humor. I mean, a dachshund cross named LOW-la?! I chuckle to myself every time I call her.

Anyway, they keep my days full with cleaning mountains of puppy poopies, picking up random things they have found and chewed to bits, and trying to keep Jethro and Ellie from barking their fool heads off. Lola has only barked one quiet bark that I've ever heard. She's just amazing. I wish she were mine, too.

(Funny, my verification word is "cousapho." Is that a lesbian cousin? LMAO!!!)