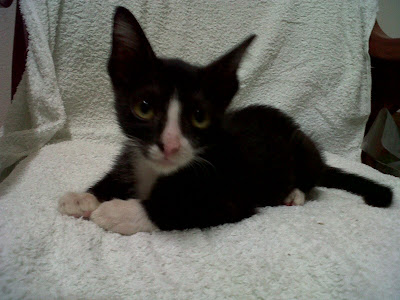 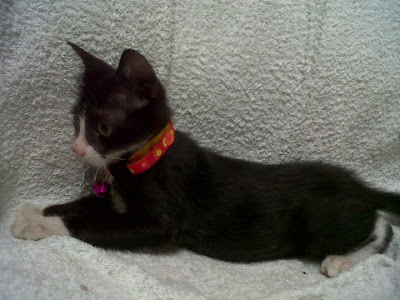 Hopscotch came into my life in late May 2011. I named him after the blog title of my dear departed friend, Louis Sellier. I found Hopscotch in the space behind the condenser of one of the air-conditioning units in my office.

He was a sickly kitten, and full of fleas. I had to treat him for the fleas before I could bring him home. He survived the flea bath. I took him to the vet for his first vaccination. He survived the vaccination. He couldn't eliminate waste properly. So back to the vet we went, and after being treated with laxatives and dewormers, he was finally able to use the litter tray. Then other problems flared up. Poor little Hopscotch had such a high worm load that he could hardly eat and digest his food. So I had to administer the highest safe dosage of deworming medicine possible.

Once Hopscotch was clear of worms, I started worrying about his weight. He seemed unable to gain weight or grow, and was rather quiet and pensive for a kitten of his age. Still, he was an affectionate and loving kitten who was content to sleep against my neck or arm all night.

I left him in the good hands of my dear friend, Nicole, when I left for the Asia for Animals Conference in China in June.

Upon return from China, we found that Hopscotch had lost some weight, perhaps due to anxiety in my absence. We tried to make it up to Hopscotch with more cuddles, attention and yummy food.

When Topsy and Turvy, the rescued kittens, succumbed to parvovirus, I wasted no time in getting Hopscotch a full medical checkup and antibiotics to stop the secondary infection, even while I was still grieving for Topsy and Turvy. I was determined that Hopscotch should live, and I was pleased to see how well he socialised with other cats and humans. He was, to me, the ideal kitten.

Hopscotch's condition continued to deteriorate in July and soon he was practically skin and bones. I was horrified and soon vet visits became an almost daily affair. Hopscotch was constantly dehydrated and needed intravenous injections of glucose and fluids to stay alive. With grim determination, I pledged to spend less on my own needs and to direct all my resources towards saving Hopscotch instead.

Hopscotch was hospitalised for the final time last Saturday, 30th July. By then, he was so weak he could hardly meow. His gums were white and his pupils dilated. His body temperature was low. He was severely dehydrated despite all the vitamins, supplements, good food and filtered water that I provided him with. His lymph nodes by then were starting to show signs of enlargement. Amidst fears that he may have feline leukaemia virus, I begged the vet to put Hopscotch back on drips and keep him warm until the good vet was able to draw enough blood to test him for feline leukaemia virus and other retroviruses.

Hopscotch responded to the drips and antibiotics and started eating again in the next few days, but his breathing remain laboured and his kidney function was poor. A blood sample taken from an ear-prick showed that Hopscotch's white blood cells have not mutated, thus reducing the possibility of feline leukaemia virus. However, Hopscotch was so frail and his blood vessels so weak that a better blood sample could not be taken for confirmation. Still, there were enough signs for the vet to give a preliminary diagnosis of congenital polycystic kidney disease. Hopscotch's kidneys were failing in stages, and it really was the drips, medication and our love and care that was keeping him alive.

The vet called me this morning with the unfortunate news that my darling Hopscotch was no more. Never again will he lie on my tummy as I type out my assessments on my netbook. Never again will I get to feel him curl up against my neck as I sleep. Never again will I rush to prepare his wet food in the mornings and evenings and watch with satisfaction as he eats it at his own slow but steady pace.

My little Hopscotch is suffering no more. He is free of pain now, and he probably understands that I did the best I could afford for him, and loved him unconditionally.

Hopscotch, dear, if you ever get reborn as another cat or other animal, I would take you back and care for you all over again, in a heartbeat.

Rest in peace now, my beloved Hopscotch. I will never forget you.
Posted by ~CovertOperations78~ at 23:47

Ee Lynn,
You did your best and yet Hopscotch didn't survive so rest assured that Hopscotch appreciated your effort. My 4 yr old daughter Balkis lost he first pet kitten recently when the kitten went missing. Luckily she was not devastated by the loss as as it was the beginning of their friendship. Hope she will get a new kitten soon and you too will find another to replace Hopscotch.

Hopscotch,little bundle of friendship and warmth,you will be missed. Ee Lynn, sorry to hear this news. You did your best.

Dear Abang Zawi,
Hopscotch cannot be replaced. Each cat is unique. I have my other 6 cats to help me ease the pain. Hopscotch was another one of those starving little orphans I rescued. If possible, I would like to find no more suffering animals. My wish is that all domestic animals like cats, dogs and rabbits (can't survive in the wild anymore) will find good homes and responsible and loving people to care for them. Perhaps Balkis and her parents will agree to adopt a kitten from me in future -- all vaccinated, dewormed and neutered when they are old enough!

Thank you so much, dear Keats.
Yes, the good vet Dr Steven and I did the best we could. But it was a congenital kidney disease, it couldn't have been prevented or cured. Thank you for thinking kindly of my Hopscotch.

Sorry for your loss ma'am.
Quick be broken.
Heal again.

Dear Ee Lynn,
My deepest condolences on the loss of Hopscotch. What a lucky little kitten to have known your love and steadfast care for the time that he walked the earth. I hope that you can take comfort in knowing that you did your best for him. As our dear friend Reve use to remind me we can do EVERYTHING for them but ultimately the journey is theirs. May Hopscotch be at peace. From thousands of miles away my thoughts are with you. -Mutt

Dear Jeffrey,
Thank you, I will heal again, and I will continue to rescue and help animals until the day I die. Yes, it's a difficult path I have chosen, but I don't regret it.

Dear Mutt,
Thank you for your kind words and for continuing to check in on me. Hopscotch knows my housemates and I loved him. He responded to our love, so it was clear that he trusted us and knew we cared for him. Reve also used to say that our animals came to us for a reason, and whatever happened "was meant to be", and we can only do the best we can. Thank you for reminding me of Reve. It feels nice to know that someone else is thinking of her. She died a year and a month ago, on July 2, 2010, and we still think of her often.

I won't ever forget him, either, Ee Lynn.

Dear Ellen, Au and Target,
I know it's heartbreaking. Poor baby Hopscotch didn't have a chance. The odds were stacked against him from the start. And he did suffer. I watched him suffer. I tried to alleviate his suffering but it got to be so bad that neither the vet nor me could help him, so he left our world of pain and illness. :'(

Dear Pat,
Thank you for remembering Hopscotch. He will live on in our hearts for a long time to come. I'd like to think that he is fat and happy and healthy and active up there where he is now.

I trust you will persevere Lynn, with each loss.
The walls either get higher.
Or the well gets dug deeper.