The past month has convinced me that the world is an insane, arbitrary and chaotic place. It doesn't help that my daily schedule is insane, arbitrary and chaotic. Every day is an endless stream not of cigarettes and magazines, but of research papers, assessments, volunteer commitments, needy rescued animals in need of medical treatment, local political issues, world political issues, home repairs, car repairs, housework, yardwork, animal care work, Trap-Vaccinate-Neuter-Rehome arrangements and promises and favours that I was wheedled into agreeing to. My flabber is totally gasted.

As for the title of this blogpost: I was bitten by a dog at the SPCA on Saturday while trying to break up a particularly vicious dogfight. I was in the midst of giving the Sick Bay dogs baths and tick treatment when a fight broke out between Bubbie (the victim) and Paris, Suki and their gang. We tried to separate the dogs using mops, brooms and streams of water from the hose, but it didn't work. I jumped into the affray because one dog had Bubbie by the ear and another dog had her by the neck. I was afraid Bubbie was going to die so I grabbed her and held her and tried to carry her to the surgery. Somehow I got bitten and sustained a very deep wound in one of my fingers. Now my finger has been cleaned up and stitched, but it is still in a lot of pain and I can't apply much pressure on it, so this adds to my irritability. Trust my hand to get injured when I have so much to do. Tsk.

Have you ever had the feeling that you have known a blogging buddy all your life, even though the two of you have yet to meet in real life? Have you ever felt that a blog friendship was somehow more supportive and more real than some of the acquaintances you have made in real life?

Zara and I felt that way about our friendship from the time we started blogging (on another hosting site) in 2002. We found more and more in common with each other after she graduated from law school and started legal practice. So when she disclosed her plans to visit Malaysia with her boyfriend a few months ago, I was elated. We finally got to meet a few weeks ago and she was every bit as I had imagined her to be. I was thrilled to play host and tour guide and I hope Zara and Rohan enjoyed the time they spent with me as much as I did with them.

Zara came bearing gifts of a huge bundle of Amar Chitra Katha comics and a box of soan papdi from Mumbai. I was overjoyed with her gifts -- it was like my birthday, Christmas and Lunar New Year all rolled into one. She didn't leave empty-handed either, as I had already purchased gifts from the Malaysian Nature Society gift shop for her, along with a copy of Lat's "Kampung Boy" and lots of zany band-aids, which are not available in India.

Our first stop for the day was Batu Caves. Despite the fact that the Battletank's radiator had a leak, we managed to arrive safely at a workshop and spent a few hours exploring Batu Caves while waiting for the radiator to be repaired. 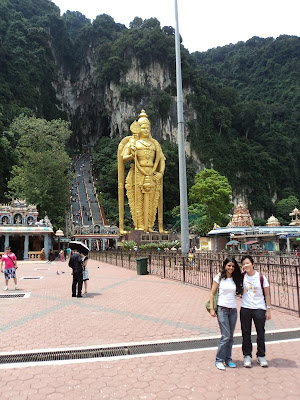 I drove everyone crazy with my questions: "Why does Lord Muruga have a poonal? Can a deity be a Brahmin? If Brahmins are humans who are believed to be imbued with divinity, but the reverse is not true, then how can it be that Muruga wears a poonal in this image of Him? True, some humans can be incarnations of deities -- Krishna often appeared in human form -- but he is still an incarnation of Vishnu. Here, Muruga appears as himself. Not as a human incarnation. Why, then, does he wear a poonal?" I guess I'll have to ask the temple priests that one. 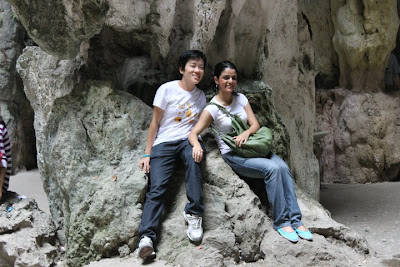 Taking a breather in the cave temple. This photo was taken by a young man we met in the temple. Trust Zara to find herself a stalker almost as soon as she arrived in Malaysia! The young man tried to maintain contact with me. I didn't have the heart to tell him that I am 7 years older than he is, and the terms of endearment he used were way out of line. 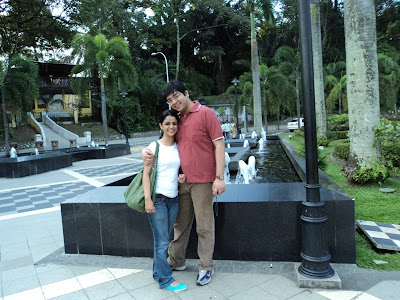 Guess who's up and about! Rohan finally overcame his jet lag and managed to meet up with us. Here they are outside Tugu Negara, the national monument. 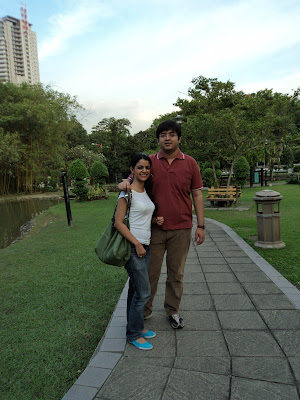 Zara and Rohan at the ASEAN Sculpture Gardens. 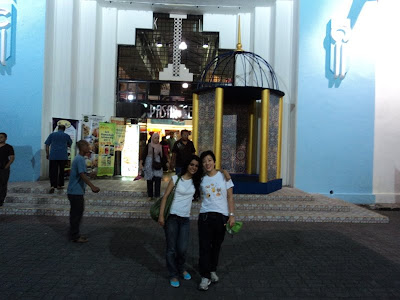 Zara and me outside Central Market. 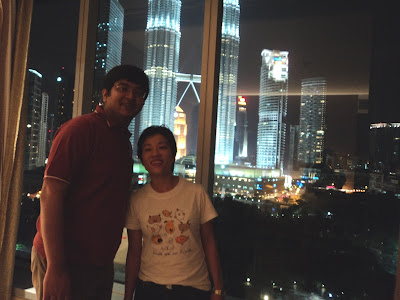 Rohan and me at their room in Trader's Hotel, with KLCC in the background.

Although the time they had in Malaysia was so short, I believe that we shared good memories of the time we spent together. I hope we'll get to meet again soon. Until then, my dear friends and I will harass each other on Facebook. Here's to friendship and Facebook! 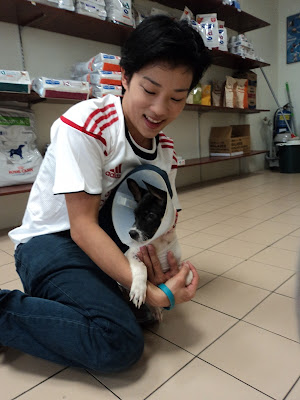 Napoleon the Puppy thinks my full-time job is to play with him. I must go and visit him again soon. Thank you to everyone who contributed towards his medical bills. You saved Napoleon's life. He is a "mere stray" no more. Whenever confronted with the choice of doing the easy thing and doing the right thing, always try to do the right thing, even if it costs more and is more inconvenient. If you have the determination to do it, you will almost always succeed. 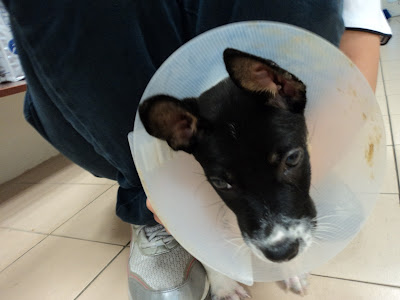 This is the face of the little dog who was almost euthanised due to his injuries. Thanks to everyone's kind donations, Napoleon the Puppy now has a new lease of life and can look forward to a life as a happy, healthy pup in a loving home. Next mission: A good home for Napoleon! 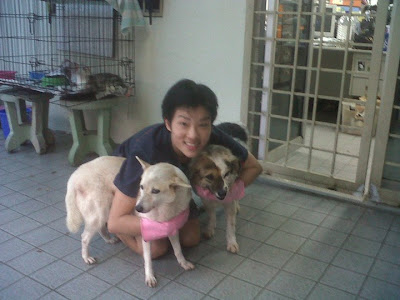 Keeping warm at the SPCA shelter on a rainy Saturday afternoon, Aug 13. I was in the middle of cleaning cages and kennels when these 2, Fajar and Sherry, decided to come and keep me company. 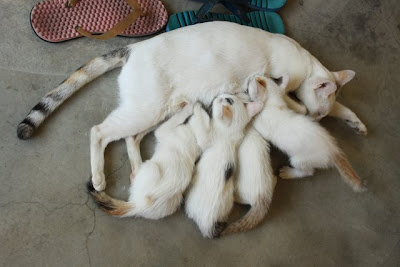 This Mama Cat gave birth to her litter in the back alley behind my friends Seng and Carol's house. My friends sought my assistance and so I brought the whole brood to the vet for vaccination and am currently fostering and deworming them in my home. I posted adoption notices in PetFinder, a local non-profit pet adoption portal, and found homes for 2 of the kittens almost immediately. The kittens are now over 2 months old and well able to eat on their own, so I will be getting the Mama Cat spayed this coming weekend.

Right now besides the Office Feral Cats that I am trying to trap for neutering and Mama Cat and her remaining two kittens, I am also providing post-neutering care for the cats who live with the Burger Stall Couple.

Somebody. I need help. I am turning into the crazy neighbourhood cat lady that your mother warned you about.

Hey Crazy Cat Lady! But you rescue woofies too...and then there's that puppy love bloke from batu caves. What a place to pick up girls (for him)!!!! purrrr *giggles*

Ee Lynn,
Go slow on the ciggy. It took years for this old man to kick away the bad habit so you better heed my advice.
Trust you to be an ambassador with visiting foreigners. You definitely will keep them happy when visiting Malaysia.
Take care.

Oof that sounds like a rough week. Hope that finger heals soon.

Ee lynn. That Malay has a saying 'Jangan dilepaskan Angin yang tersepit' Anyway this is a good story of the Sad and the Happy. It balance well indeed.

Have a nice day.

Those two pups keeping your warm are super cute. You post all these pictures of sweet adoptable animals, and it always leaves me pining for a doggins of my own. Someday... when I live in a place that allows pets... I will have a loving doggy companion.

Dear Kitties-from-Sydney,
I don't mind being picked up by cats and dogs. It's young men who don't know their place that put me off.

Dear Pak Zawi,
I think you misread my lyrics of Simon & Garfunkel's "Homeward Bound" as an admission that I smoke! Sorry about that! Clarification: I don't smoke.
As for being a tourism ambassador -- I really enjoyed playing host to my friends. I hope they will come again soon and other friends from abroad would visit, too.

Dear Ellen, Au and Target,
It was a rough week, all right. Thanks so much for your help with the kitten adoptions. My wound is getting worse because I can't leave off the housework so the stitches keep getting wet again.

Dear Pak Idrus,
It's wonderful how many friends we met in blogsphere who end up becoming dear friends in real life, isn't it?
As for the dog: I don't regret it one bit. I would do it again if it could save another animal from a fatal attack.

Colleen! Squeeee! Fancy seeing you here! Thanks for the link to your new blog! I'll be coming over right about now!
Anyhowzers: Would you have the option of volunteering at the pound or animal shelter if you can't have a doggins at home?

I hope your finger is healing well. And thank you for the update on Napoleon: he is looking lovelier every time I see him! I hope someone adopts him soon. If only he were a girl . . . .

About friends in cyberspace: I couldn't agree with you more. I found you here, and feel truly blessed. And there was Louis, whom I still think about. I could go on and on and on.

Cyberspace opened up a whole new world of amazing people for me, too.

Dear Pat,
I am so glad we met in cyberspace as well. When I first met you in real life, it was like meeting an old friend.
My finger is hurting a lot but I am trying to lay off taking painkillers for as long as I can. It will be a few more weeks before it heals completely. There's quite a deep wound ripped into my flesh.
Napoleon's story is so compelling that we have high hopes that it will attract potential adopters.

All my encounter with folks in cyberspace and later in the real-world were wonderful except meeting ZR which became a nightmare. Well it teaches me a lots about human behavior.

Hey Ee Lynn, rest ye that finger. Just your luck to be caught in the brawl. On another note, I remember a vicious fight with our hamsters after their babies were born when we tried to keep the babies 'safe'.
Glad your cyber buddy has come to you!

Thanks, gang, for coming by to help me celebrate my birthday. Do come and visit me again in my garden. Spring soon and the weather will be nice. For the doggies, there is one next door who would really appreciate your company. The little mite is there all by himself most of the time. We feel sorry for him. His mom is in hospital and he is our neighbour while he waits for her to get better.

Purr that your wound get better soon. The furries need you!!!

Dear MoMo,
What a lovely surprise! How nice of you to come over! I trust you had an awesome birthday party! I wish I could come over and give the little dog next door some TLC. My wound has almost completely healed now, and I am so happy that I will be able to be back in action at the SPCA this coming weekend!