This blogpost was supposed to be about something else (read: something totally mundane and uninspiring), but the emails and text messages flooding my Berry last night impelled me to add my two cents worth to the topic of the pet boarding facility which breached its contract with its clients and left its clients' cats unattended without food and water for an extended period.

I was in the midst of planning a break-in at an apartment unit in Jalan Kuching (with the approval and help of the police and the apartment management corporation, to make it legit) to rescue several abandoned cats when news reached me of the raid on the Petknode Cat Boarding Centre in Damansara Damai by the police, animal rescue volunteers and animal caregivers. I am glad that the police and our ever-reliable Bukit Lanjan State Assemblywoman have stepped in and that the animals have been removed from the terrible premises, but everything else is a merry chaos.

The SPCA Inspectorate was only informed this morning about the raid, break-in and removal of the suffering cats, so our work is as good as done. All the evidence has been tampered with. As anyone with a little bit of experience in investigative work and anyone who has attended our GAWS-SPCA Animal Welfare Legislation and CSI Workshop will tell you, even if you are armed only with a cell phone camera (who doesn’t have one nowadays?), you should take sufficient photos to help establish a causal link between the acts or omissions of the perpetrators and the harm suffered by the animals. The simplest procedure should be to:
(i) Take a photo of the exterior of the building showing the signboard and the address;
(ii) Take a photo prior to entering the room, so that an objective viewer will be able to see that the room being photographed is part of the interior of the building whose exterior had been photographed;
(iii) Take a photo of the room before anything is moved or touched.
(iv) AND ONLY THEN take pictures of the poor cats in various stages of illness, dehydration, starvation and distress. Take close-up photos of chains/leashes, cages, litter trays, empty food and water bowls, wounds and sores, closed windows, mail piling up by the door and anything that can help establish neglect, abuse and/or abandonment. Keep your photos in a memory card without editing anything, so that if you are called upon to give evidence, the photos you took will be acceptable as documentary evidence in a court of law.

I don’t know if the police or any of the distraught pet owners had the presence of mind to do this before they removed all those cages full of poor cats, but if they hadn’t, it could spell trouble for the prosecution team.

It shouldn’t be too difficult to establish cruelty to animals in this instance, but since the penalty for cruelty to animals under the current Act is such a derisory slap on the wrist, the best option would be to go for other offences under the Penal Code as well, including Section 418 (Cheating with knowledge that wrongful loss may be thereby caused to a person whose interest the offender is bound to protect – maximum penalty: 7 yrs in prison or fine or both) as well as Section 428 (Mischief by killing or maiming any animal of the value of five ringgit – maximum penalty: 2 yrs in prison or fine or both).

But above all, the important thing for us to remember is do something constructive with our outrage. Sign the Petition to stop animal abuse, if you haven’t already. Voice your thoughts on this issue in a letter to the Press. Ask your MP to vote for an increased penalty under the new Animal Welfare Act when it gets tabled in Parliament next year. Call your MP the day before the reading of the Bill in Parliament, introduce yourself as one if his/her constituents, and express your hope that he/she will vote for the Bill.

Malaysians, in general, tend to forget easily. We respond to incidents. We express anger and outrage when something bad happens, and then forget about it when the furore dies down. Let’s be the exception to the general rule. Let’s speak up. Animals and the natural environment have no suffrage. We do. Help them with your voice and your votes. National Day was merely a week ago. If we want to do something meaningful in commemoration of our country’s independence, then we should exercise our freedom of expression and free thought. Let’s make this country better for all its citizens – human, animal and plant. 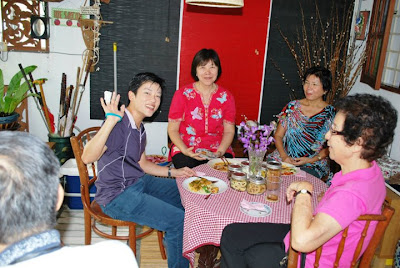 My big bandaged finger and I go visiting on the first day of Hari Raya. Pak Idrus and Makcik Asmah's home is always a joy to visit. Their hospitality, warmth and sincerity always make one feel very welcome. This photo is courtesy of Pak Idrus.

(Note: Further proof that the world is full of friends -- I met at least 4 other mutual friends at Pak Idrus' Raya Open House, and made at least 3 new friends.) 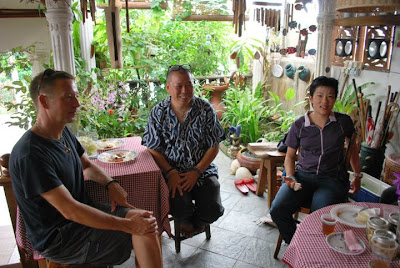 Chatting with my new friends Kevin and Choy, with whom I am currently executing a plan to bring in the stray cats of Ampang Jaya to the SPCA for spaying. I meet up with them tomorrow to set up the cage and carrier, and maybe we'll meet up again to discuss eco-tourism and volun-tourism ideas. This photo is also courtesy of Pak Idrus. 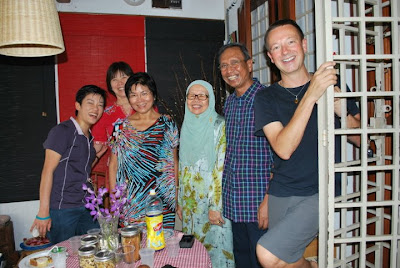 What a jovial lot we are! An especial thanks go out to Makcik Asmah for her thoughtfulness in making sure there are vegetarian dishes, and to Pak Idrus' daughter Lin for her delicious cakes! Heartiest thanks to our wonderful host, Pak Idrus, for bringing friends, old and new, together. What need is there for political slogans and self-conscious attempts at "unity" when there is genuine friendship, acceptance and openness?
(Photo credits: Pak Idrus) 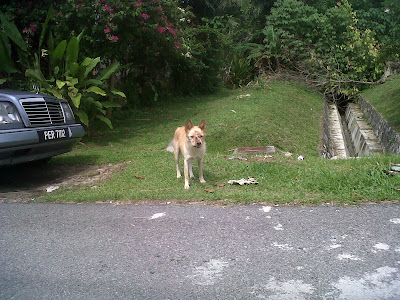 Here is the injured 'community dog' that Kevin and Choy wanted me to see. Something injured him so badly that there is a wound going through his snout right through his upper jaw. You could see the exposed bones and the mouth through the wound. The poor dog was very scared and skittish and would not come to me. I begged the SPCA for a can of wound spray and brought it back to Choy. Choy reports that the dog dislikes the spray but does not try to run away, probably because he knows Choy is trying to help him get better. The wound is healing and there is less risk of parasitic infection now that it has been sprayed with antiseptic solution. 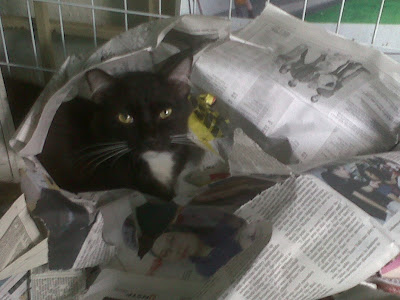 A big, bold kitty at the SPCA lets us know just what he thinks of the Malaysian mainstream media. You tell 'em, Kitty! 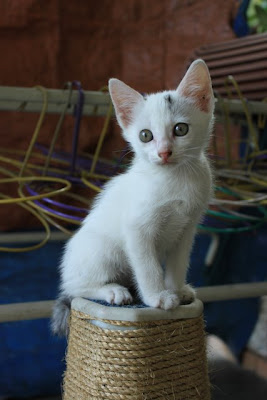 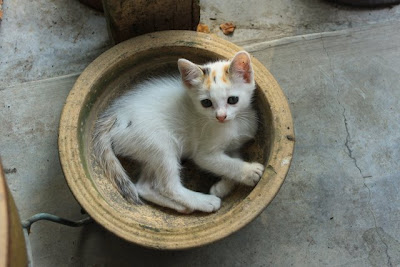 Tigger and Cali (both 3 months old) are vaccinated, dewormed and toilet-trained. They will be spayed at the age of 5 months. They are still in need of good homes. You will help me spread the word, won't you please?

CO78,
And to think that hellhole is just five minutes away from us! Sheesh! Mama hasn't opened our house for anyone as she's still virally infected. Oh well.... purrr meow!

So sad to hear about the Petknode heartbreaking incident.
I hope the Petknode owners will get enough punishment not just by the law but by God.
They were very cruel and barbaric.
May they rot in hell quickly!

Dear Kitties From Sydney,
Evil lurks among us! What those two business operators of Petknode did was nothing short of pure evil! It wasn't even that they couldn't afford pet food. Many pet owners said they handed their cats over with bags or containers full of cat food, and at the point of rescuing their cats NONE OF THE FOOD HAD BEEN TOUCHED. So this shows that the operators of Petknode had no intention of feeding or caring for the cats from the start. It wasn't as though they started caring for the cats and found it all more than they could handle and then got overwhelmed and left the poor cats there. They just simply didn't bother. All they wanted was the money. The police has been useless. What we need is mob justice and 120 litter trays full of cat poo to drown these guys in.

Wishing your Mama a speedy recovery.

Latest news: The Petknode operators actually had the nerve to issue a thank you letter "kepada semua volunteer yang mengambil dan menjaga kucing-kucing ini" and admitted that "kami tidak berupaya menjaga haiwan-haiwan ini lagi." In the first place, they didn't have a licence to operate a boarding facility, so it is a clear-cut case of cheating.
The police didn't see it that way, though. A group of concerned people went to hand over a memorandum to the IGP at Bukit Aman today, and the ASP advised us to just go to the Department of Veterinary Services with the matter.
But the maximum punishment under Animals Act is just RM200 fine or 6 months' imprisonment, and we can't file a case that easily because the rescuers have tampered with all the evidence and EVEN CLEANED THE PLACE UP by the time the SPCA Inspectorate arrived. The maximum penalty under s418 Penal Code for cheating is 7 years, which would probably mean the defendants can't leave the country while the court case is ongoing, and it is easier to establish, because all we need are the Registrar of Companies and DVS records to show that Petknode has no licence to provide boarding services and receipts to show that they have entered into contracts with the pet owners despite not having the licence to do so. We can also easily establish their failure to provide boarding and petcare services as advertised, thus causing wrongful loss to the pet owners. The police are just plain lazy. It's time we turn the civil service around. We need a civil service and security forces that we can be proud of.

Great post Ee Lynn. I rad the police are charging those people with cheating, but as you said, memories here are very short. I hope your kitties are adopted soon by nice people.

Read about the cats who were boarded and abandoned. I couldn't believe my eyes. Those poor innocent darlings. And to think their owners went away thinking they were safe and being taken care of.

Yes, the penalty for these guys is a joke. So, unless the law is amended, there is no stopping something like this being repeated.

About your kitty pix: I hope those pretty darlings find good homes!

Dear Ellen, Au and Target,
Last I heard, the police ISN'T proceeding with cheating charges. Trust the police to blow hot and cold on anyone but their political masters. What, they are waiting for the cats to pay them a bribe or a lucrative kickback before they will agree to proceed with investigations?
Thank you for your good wishes for the kitties. At least they have a good temporary home now in any case. We will take our time to find the best homes possible.

Dear Pat,
What we need is mob justice. 300 masked crusaders giving these 2 miscreants the Chuck Norris treatment. Karate-chop off their limbs and stuff them in cages and drown them in cat poo and pee. Justice for the Kitties! We will not rest until there is justice for the kitties!

Why isn't the police proceeding with Cheating cases? Can't pet owners force them to do this? I would! If I weren't on death row for murder. Bloody buggers deserve a whipping.