Over the last decade, there has been a rise in documentary film-making, especially those with an environmental or social justice theme, including by Malaysians. The common objective of such films would naturally be to raise awareness on environmental and social issues and hopefully engender a spirit of activism. 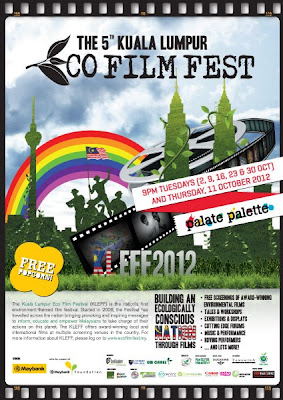 EcoKnights, the same lovely organisation behind the Anugerah Hijau awards, has been conducting the Kuala Lumpur Eco Film Festival since 2008 to make these documentaries accessible to the public.

You would think that someone with my pedigree in environmental activism would have attended the film festival before, especially since Yasmin of EcoKnights did such a glowing write-up on me in their newsletter. Well, I haven't, partly because almost all my after-work hours are filled with other volunteer and social commitments, and partly because I feel that watching a documentary and familiarising oneself with environmental issues almost never translates into hands-on action. Very few of the hipster yuppies and fad-following college sophomores who throng these green festivals end up walking the talk, although I would never discourage anyone from wanting to learn more by attending these film festivals.

My (genteel and largely silent) objection to such film festivals is chiefly due to the fact that: (a) At least half the people attending these documentary screenings would have driven there in private vehicles; and (b) they're preaching only to the choir -- those with high-consuming, high-waste lifestyles are not going to attend green film festivals. Half the population of the Klang Valley would still be shopping and dining out and yakking on their phones as they do every weekend, while a negligible minority who are actually interested in the documentaries would have driven out so they could catch the film festival.

This year, I made an exception for "Big Dreams, Little Bears", a documentary on Malayan Sun Bears and the Bornean Sun Bear Conservation Centre, a wildlife sanctuary and non-governmental organisation founded and managed by my friend, Wong Siew Te. 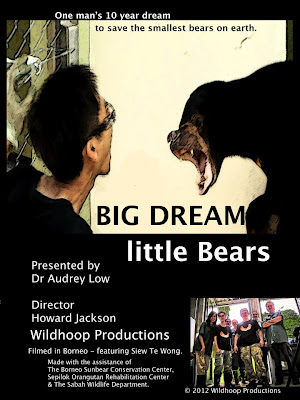 Directed by Howard Jackson and presented by Dr. Audrey Low, "Big Dreams" introduces the viewer to challenges faced by the Malayan Sun Bear population, including those resulting from deforestation, habitat destruction and forest clearing for agriculture. Thus began Wong's 10-year struggle to save the little-known sun bears.

When the Bornean Sun Bear Conservation Centre was first set up, few people outside of conservation circles knew of it, or were even aware that these little bears are natives of Sabah. Few people have any encounters with sun bears apart from glimpses of the two forlorn sun bears in their barren enclosure in Zoo Negara (now improved and with enrichment activities). Many did not even realise that the BSBCC was independently funded, and had assumed that they received funding from the State government or WWF. 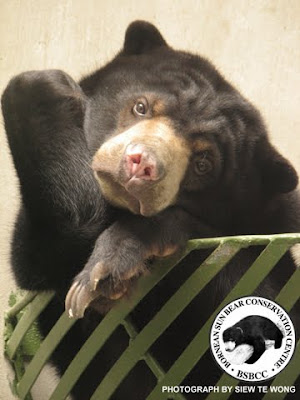 Aravind and I dropped by Universiti Malaya on Sunday after volunteering at the SPCA animal shelter as usual to catch the film and to catch up with old friends. Here are a few clips from the documentary: 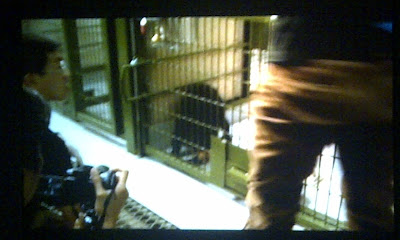 Wong and team observe the sun bears, mostly rescued from private zoos, private owners and the cooking pot, shortly after the rescue centre was set up. 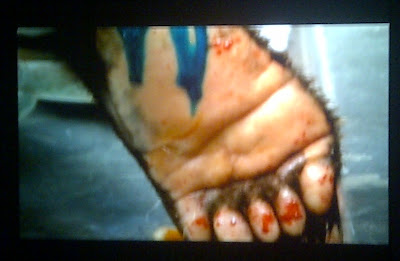 Two of the biggest male bears had a fight and they were given medical treatment under anaesthesia. Here is the foot of one of the bears. Isn't it adorable, even with blue wound spray on? The hairs in between his toes help him have a better grip while climbing. The bears may be small but they are very strong. Their claws and teeth could rip through a young coconut the way we crunch through peanut shells. 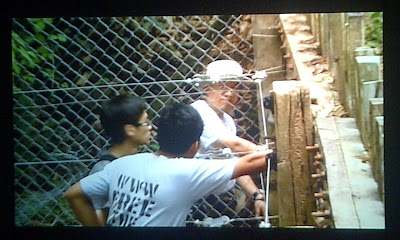 Wong, Wai Pak and the BSBCC team put up electric fencing to keep rogue macaques out and the sun bears in. 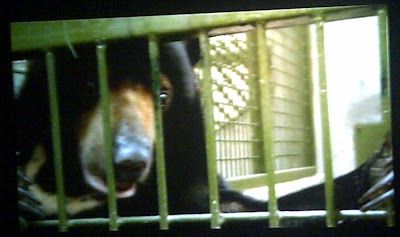 "Hello, I may be cute, but I am a wild animal and am unsuitable as a pet". 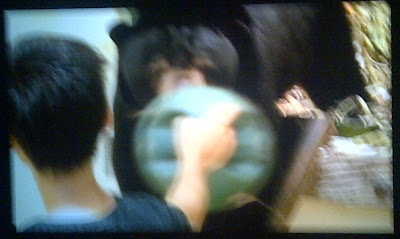 Wai Pak decided to try to lure Om the male bear out. 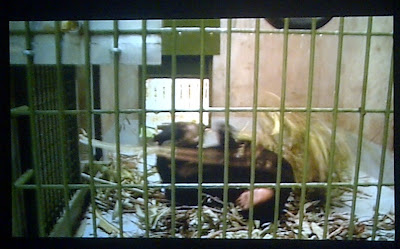 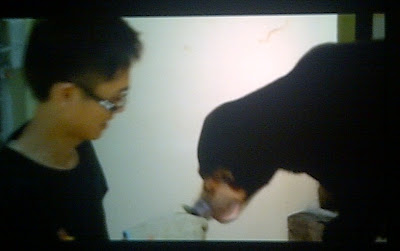 Suria accepted Wai Pak's invitation to come out and play. 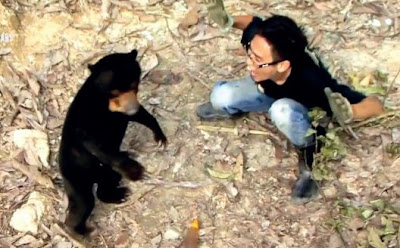 Suria chased Wai Pak around the compound for over 20 minutes. It looked like so much fun! I told Aravind that when we go to volunteer at BSBCC, I would like to be chased by a sun bear too. Aravind asked me to consider what would happen if a sun bear manages to catch me with his or her coconut-shredding claws. (Photo credits: TimeOut KL) 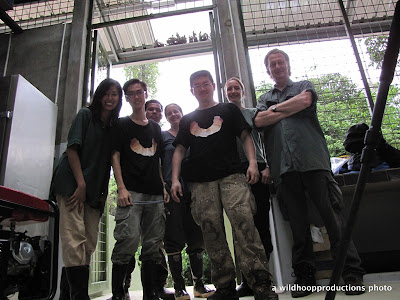 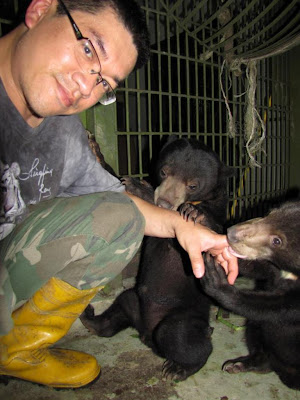 Siew Te has made many sacrifices in order to save these bears. This was a photo he posted on his New Year's Eve celebrations, when all of us were posting from wherever we were partying. What we wouldn't do to be in his place instead! He is doing such a great job. May we all continue to do our best to save the sun bears and their habitat.


What YOU can do to help sun bears:

1. Educate yourself on this little-known species.
2. Raise awareness on the plight of sun bears via blog and social media.
3. Support BSBCC's fundraising efforts.
4. Volunteer both at the BSBCC rescue centre and for their fundraising and awareness events.
5. Offer your skills and services -- whether as an editor, photographer, copywriter or graphic designer.
6. Be a smart consumer -- Read your labels. Buy only certified sustainable oil palm and timber products.
7. Do not support the wildlife trade. Report any incidences of sun bears being kept in captivity. Even in licensed facilities, sun bears may be ill-treated or not provided with adequate nutrition and enrichment. Keep your eyes open for such incidences of poor treatment.
8. Report wildlife crimes (including poaching, hunting, sale and consumption) to the Wildlife Crime Hotline at 019 356 4194 / report@malayantiger.net. 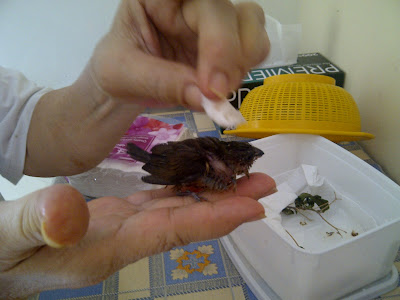 The baby bird CovertDad and CovertMum rescued from the drain 3 weeks ago, getting a sponge bath from CovertMum. 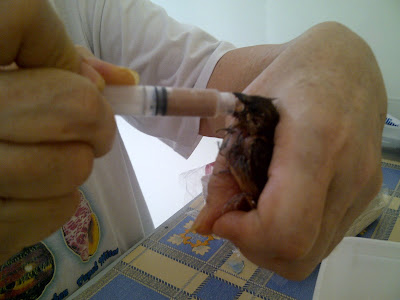 CovertMum feeding the baby bird. I think it's a Eurasian Tree Sparrow. 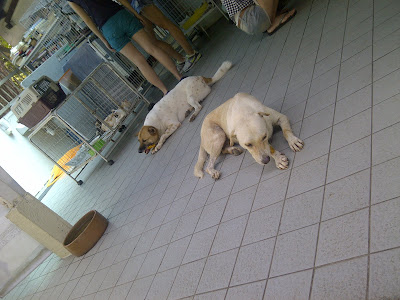 Post-bath treats for the dogs at the SPCA. 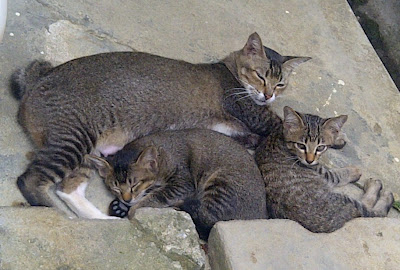 My latest foster cats, who were rescued from our office canteen on 11th October. They have since been given a flea bath and been spayed and dewormed. The adult cat is Cantina. Her kittens are named Boris and Clyde. All of them are up for adoption. 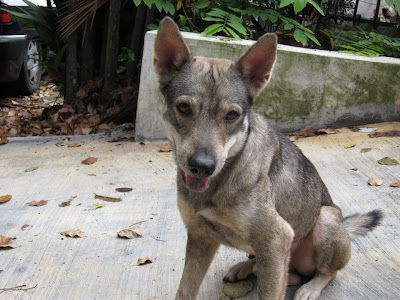 My friend Jennifer is providing temporary food and shelter for this handsome, friendly and approachable young male dog. We believe he was a former pet and has been abandoned. Dingo has already been bathed, Frontlined, vaccinated and neutered. As we have spent quite a significant amount on vet fees, we request a kind donation of RM100 as adoption fee. You will only have to attend to the second vaccination and the dog licence application. Please contact me if you would like to adopt our Dashing Dingo!

CO78,
Woohoo! I understand your feelings about green events....we've not been attending any too but that doesn't mean we don't support, eh? Am glad to say that at least now we're in a position to be able to use "green" technology to bring solutions to communities. Walk the talk, eh? purrr....meow!

Dear Kitties from Sydney,
Yes, your Mama's organisation definitely walks the talk when it comes to environmental solutions and social responsibility.
I'm curious to know how many people who attended the KLEFF actually put their knowledge into practice, commenced volunteering, shared their knowledge with others or made significant lifestyle changes.

Thank you for the pix and info on the sun bears. They're such cuties.It kills me to see and hear what's done to them :(

I'm glad to see that the little bird is doing well! I'm sending good vibes into the universe that'll help it grow big and strong and fly away happily!

Dear Pat,
Thank you for your kind wishes for Birdie. I will let Birdie know.
Sun bears are simply precious, aren't they? I am trying to make plans to volunteer at the centre next year.

Hi Ee Lynn, I think all is not lost on those who attended KLEFF. Something will' happen' in them to do something:)
You're right about the sunbears. I was in Zoo Negara about a month ago.The animal enrichment actvities make a difference in their lives as we went around with the Education Executive learning more about the work behind the scenes.

Thank you for your encouraging comments, Keats! I hope the KLEFF will foster a spirit of voluntarism and activism in those who attended, too. I want to volunteer at Zoo Negara again soon. I hope you will be able to join me then! Will let you know well in advance and will come to pick you up!