We are now officially in the final quarter of the year. October is a month full of delightful things to look forward to -- World Animal Day, Malaysian Nature Society's Festival of Wings, Oktoberfest, Navrathri, Halloween and some of my best friends' birthdays. 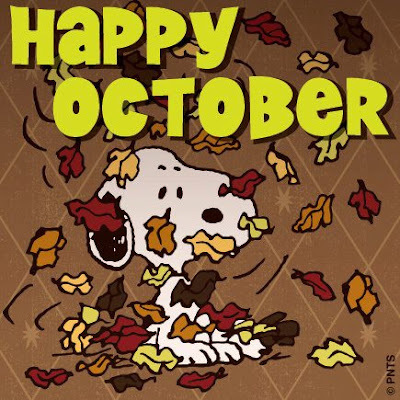 October started off with a bang with the visit of my buddy Sumita. We were best friends in college but somehow we drifted apart after graduation and being called to the Bar. She made a special trip down to KL for the World Animal Day festivities. 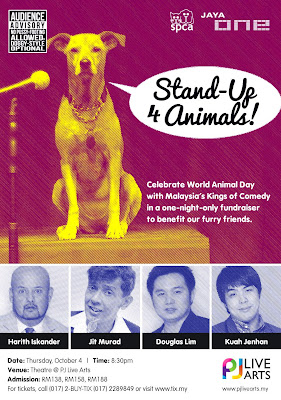 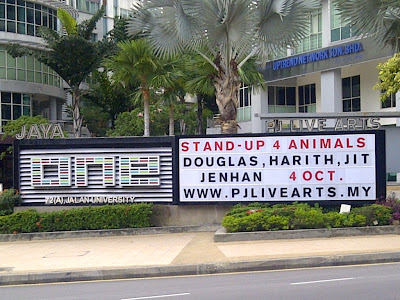 The funny ones do their bit for the furry ones! We attended the Stand Up for Animals charity comedy show at the PJ Live Arts Centre on October 4, World Animal Day. It featured some of our country's best comedians. All proceeds would go towards community animal spaying and neutering efforts. 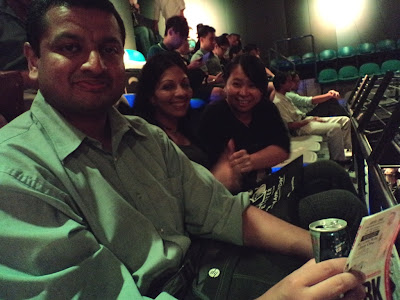 My three best friends -- Aravind, Sumita and Nicole -- waiting for the show to start at the PJ Live Arts Centre. We know we're in for a good time! 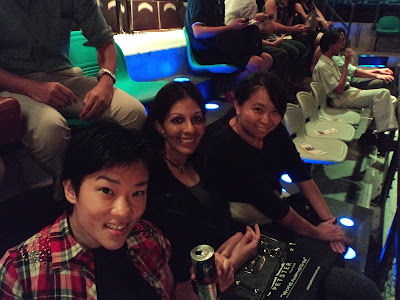 Here I am now, with the girls, before the show started. What a riot it was! 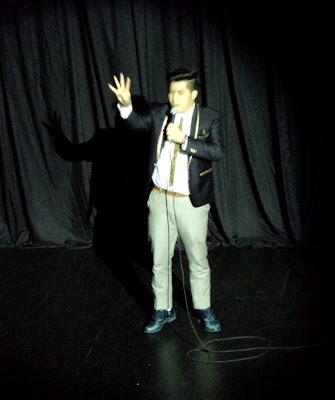 Kuah Jenhan was the best comedian by far. That's a name we're not going to forget in a hurry! We love his politically incorrect jokes about the differences between men and women and his funny anecdotes about his family. There's just something so spontaneous, endearing and relatable about his jokes. 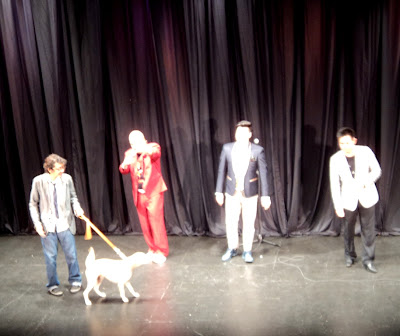 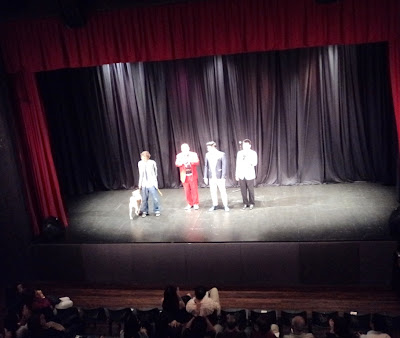 The five stars of the evening, (L-R) Jit Murad with Winter (Richard and Chae Lian's lovely dog), Harith Iskandar, Kuah Jenhan and Douglas Lim, came out to take a bow at the end of the charity performance. In my opinion, Kuah Jenhan and Douglas Lim did a sterling job of taking the mickey out of themselves and Malaysians and having us in stitches. I can tell Douglas has never really given up teaching (he used to be an English teacher before he ventured into acting and stand-up comedy) because his lessons on Malaysian English were outrageously funny and accurate.

My friends and I couldn't stop talking about Jenhan and Douglas for days, and continue to crack up each time we repeat the jokes to one another. Jit Murad was off-form and really quite pitiably unfunny. Maybe it's just not his day, or maybe he is going through some issues. Harith Iskandar is overrated as usual and nowhere near as funny as his younger and more charming counterparts. You can only reveal so much about your personal and family life before you start boring the audience and making us feel uncomfortable. I thought his performance was the weakest of the lot during Kings and Queen of Comedy Asia 2011 as well. Perhaps it is time for Harith to consider another career if he is going to continue recycling the same jokes. 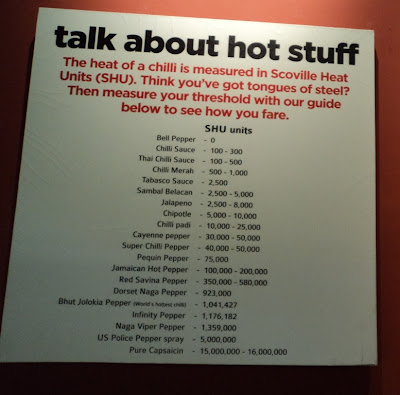 Remember how I mentioned wanting to try the Bhut Jolokia in my Bucket List? Well, we sampled it and survived! In fact, it wasn't as painful an experience as others would have me believe! It really is very tasty and addictive if cooked right. You can see the Scoville Heat Unit chart here in Chilli Rush, one of my favourite restaurants, in Jaya One, also one of our favourite shopping complexes due to the fact that it is pet-friendly. The Bhut Jolokia (also known as Naga Jolokia) is estimated to be over ten times hotter than Chili Padi. Which suits us just fine because Aravind and I are the kind of people who eat Chili Padi for dessert. 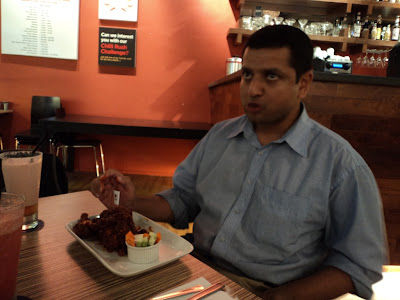 Here's Aravind reacting to his Bhut Jolokia chili wings. How I laughed at my funny, goofy boyfriend and his stomach of steel! He did find it scrumptious, though. Nothing would mar the experience of paying a lot for a dish for the sake of the novelty and bragging rights of having sampled Bhut Jolokia more than to find that the dish was unpalatable. I've always loved the food here, and they have quite a wide vegetarian selection. 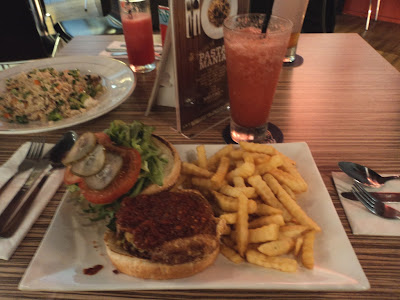 I had a vegetarian burger with Chilli Rush's special chilli gravy. Their food, as always, is full of flavour and texture. I've had soggy and crumbly vegetarian burgers before but Chilli Rush's veg burger is not one of them. The vegetables are fresh and crunchy, the bun and patty remained firm and tasty and the whole experience was a treat. This is the sort of place you want to come to for a celebration. 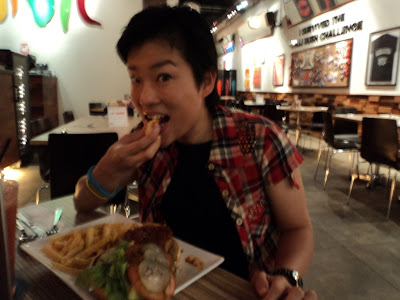 Approaching the Bhut Jolokia gravy with eyes wide open, for more reasons than one. I touched my eye by mistake after handling the chilli and was in pain for a few agonising moments. 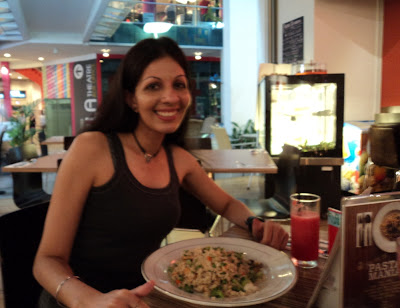 My fellow vegetarian Sumita with her veg fried rice. She was sensible enough to stay away from the spicier dishes. Nicole joined us later and had bangers and mash. We finished off our feast by sharing a slice of lychee cheesecake and one of carrot cake. The cheesecake was exquisite and silky, while the carrot cake was moist, dense, delicious and not too sweet. 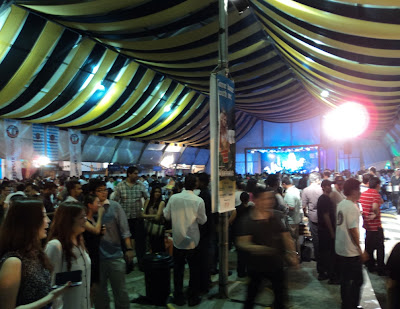 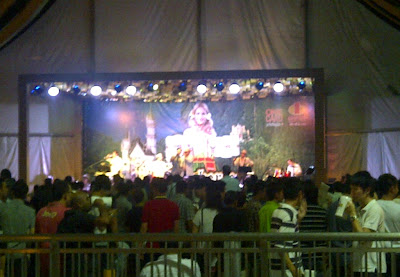 I took the afternoon off on Friday to spend time with Sumita. We had lunch at Vegelife Cafe, one of my favourite eateries, and then moseyed around Sunway Pyramid for a few hours. Aravind called up to say that he was at the Oktoberfest event in One Utama with his colleagues, and asked us if we wanted to come over to join in the fun. As if we needed an excuse for beer, good music and a party! Some people hate crowds, but I love people and being among others, and was soon a part of the sweaty, smiley mass of humanity. 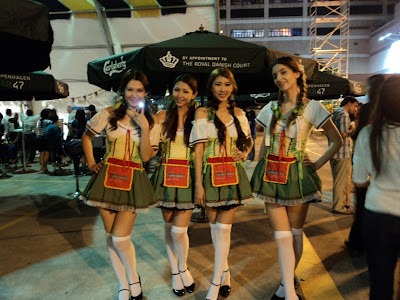 Lovely and obliging Oktoberfest lasses promoting the beer and the festivities. 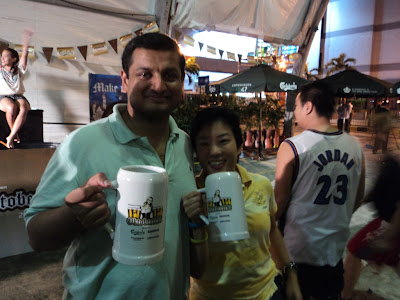 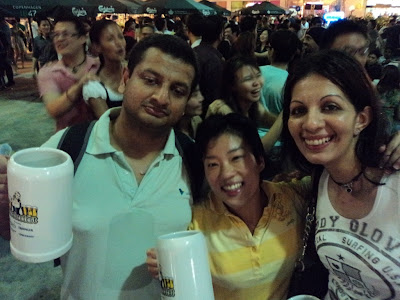 Prost, prost! We drink to your good health! Aravind got us a giant souvenir mug with a litre of Franziskaner beer each. Sumita and I found the beer refreshingly smooth and sweet to the tastebuds. Definitely a class above the rest! 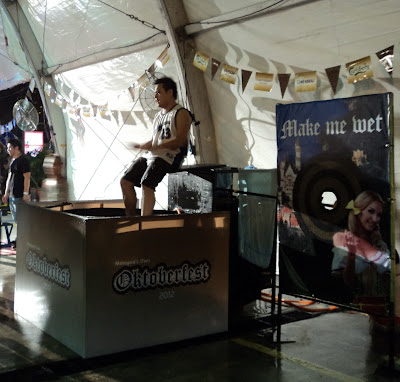 Some brave souls volunteered to be the victims at the Dunking Station. Considering the amount of beer the guys had, most of them had deadly accurate aim. 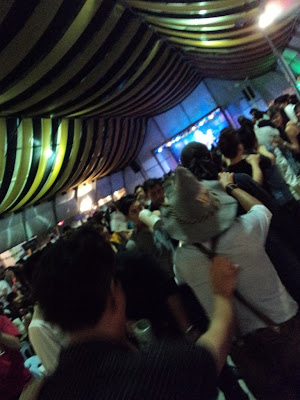 Drinking responsibly to me also entails being cheerful and happy revellers, and none exemplified the spirit of Oktoberfest so well as these Malaysian celebrants who formed an impromptu Conga line. The musicians were as enchanted with the sporting crowd as we were with them. 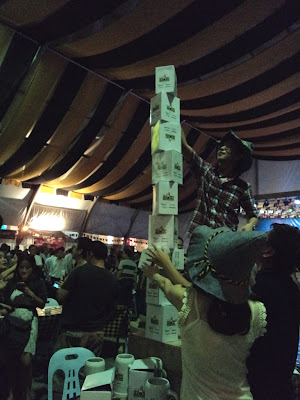 Give a group of people enough beer and time on their hands, and they will find their architects within! This was not part of the official activities, but the revellers at this table decided to build a tower of boxes. 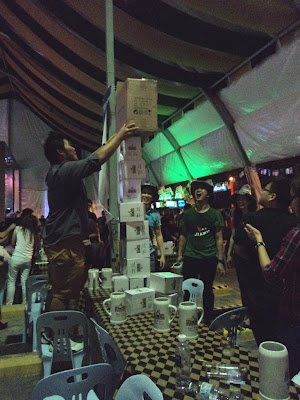 Not to be outdone, the guys at the next table commenced building their box tower as well. Unconventional building materials were added and amazingly enough, the tower managed to remain standing for a significant amount of time. 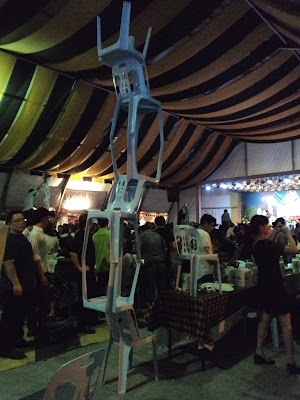 Oktoberfest turns into a bit of a Burning Man Festival with everyone outdoing the other in making towers and sculptures out of anything they could find. As my friend Pat said: "To think they managed this with beer inside!" 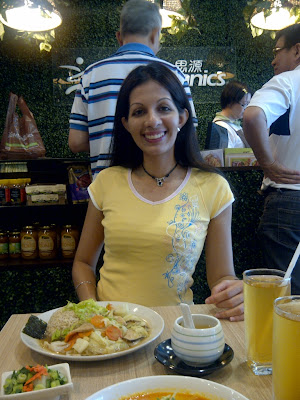 Friday's pleasures necessitated a detoxification regimen on Saturday. We had lunch at BMS Organics. It was like dining on the set of The Biggest Loser. They made us take spirulina tablets before our meal and the lunch sets came with a hair-raisingly strong-tasting enzyme drink (think full-strength apple cider vinegar). 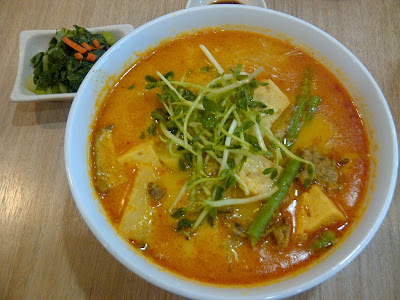 My curry laksa is made with soy milk instead of coconut cream. The meal was unequivocally healthy to the point that we had to compensate with french fries and soda later.


I spent Saturday afternoon at the SPCA as usual after seeing Sumita off.  I will miss Sumita very much -- we had so much fun over the last 3 days that it was like our undergraduate days all over again. 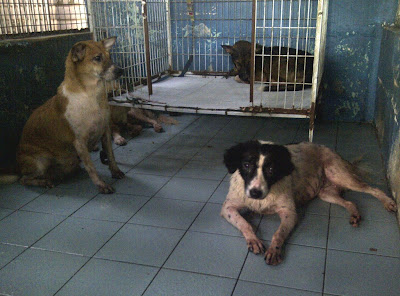 The dogs and I were just chillin' at the Maternity Kennels after I gave them their baths and tickwash. I know our animal shelter could do with a new coat of paint and some new cages. Perhaps some kind organisation would like to help us out as part of their Corporate Social Responsibility project? 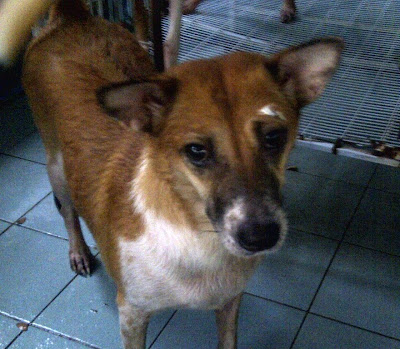 Isn't she precious? This doggie had a little cut above her eye, and I dabbed Beprogent ointment from my animal First Aid Kit on it after I gave her a bath and tickwash. The dab of ointment just makes her look more comical and vulnerable. I wish I could bring them all home. I finished cleaning and disinfecting the shelter only around 8.00 p.m.as I had arrived late. 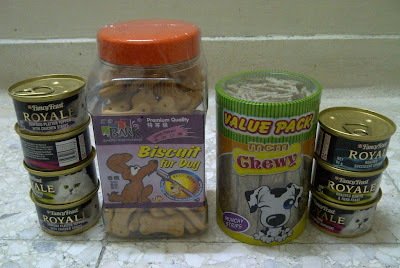 World Animal Day treats for my Rowdies, for they have made my life complete.

~May your October be as filled with joy, meaning and friendship.~

To learn more about the PJ Live Arts Centre, follow this link.

To learn more about Malaysia's Own Oktoberfest, follow this link.

To learn more about volunteering at the SPCA animal shelter in Ampang Jaya, follow this link.

To learn more about Chilli Rush Restaurant, follow this link.

To learn more about BMS Organics, follow this link.
Posted by ~CovertOperations78~ at 20:41

What a lovely happy, happy post! I love reading about how you've spent your week, and this time, it was filled with fun for YOU. Nice job!!

You echo my feeling regarding Harith Iskandar: time to move on. I've seldom found Jitt Murad funny; and Douglas Lim... well, I can never decide if his Chinese accent is real or put on, and that distracts me from his jokes! Hahahah!

Kuah Jenhan: Since I live on Mars, I haven't heard of him. I'll You Tube him and see if I am lucky.

Your friend Sumita has a lovely smile. And your Aravind - what can I say? He looks like just the right person to take care of you!

How good to hear from you again, Pat! Yes, Sumita has a bollywood smile and Aravind and I take care of each other and keep each other happy. That was a crazy week, but it had the right balance of community service stuff and gratuitious fun stuff.

Hello Angelina and all at home,
Thank you for stopping by. The Rowdies got their treat but I think I am the one who is lucky to have them in my life. Uncle A thanks you for your kind words. It's the first time he has received a compliment from a cat, although he does know that the Rowdies love him to bits.

What FUN you had! That must have been great therapy :) A good breather from the countless tasks you do.
Harith is no more funny. Overrated.

I agree, Keats! Harith and Jit are not even funny anymore, I don't know why Harith was placed as the final act. What a letdown. As for taking a break, I always believe in combining fun with responsibilities. This is why I always urge my volunteers to go for all the various trips, walks and presentations during events like Festival of Wings and Raptor Watch, and to always take a break for snacks and laughter.