Another Trip Around The Sun

“Happiness is not something ready made. It comes from your own actions.”
~ Dalai Lama XIV

And so on the 9th of December, I observed my 34th trip around the Sun. I would like to express my gratitude to my family and wonderful friends for the lovely birthday wishes, messages, kind thoughts, cards, gifts and physical and cyber presence. You've made my birthday very meaningful and unforgettable.

The Week That Was: 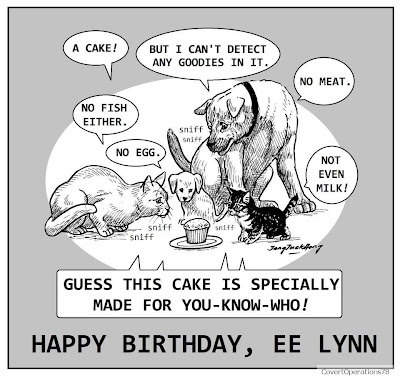 A lovely birthday cartoon created for me by my immensely talented friend, T.H. Tang. 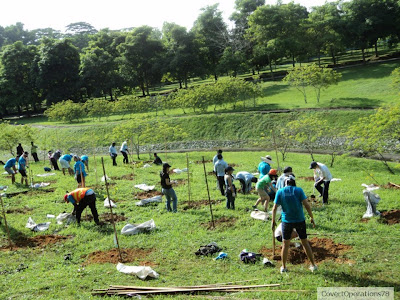 2nd Dec 2012:
Vale Malaysia's Volunteer Day.
I joined Aravind and his colleagues in planting trees at the Kepong Metropolitan Park. Aravind is in the fluorescent Fire Commander jacket, although there were no forest fires for him to put out. As part of the Emergency Response Team, he had to be in charge of safety. 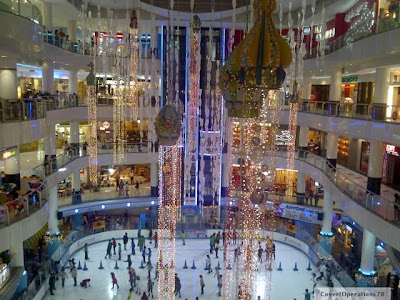 5th Dec 2012:
Aravind and I had a 5-day staycation on the occasion of my birthday to do all the things I love best, which included ice skating.
This is what the school holiday crowd at the ice rink at Sunway Pyramid looked like. 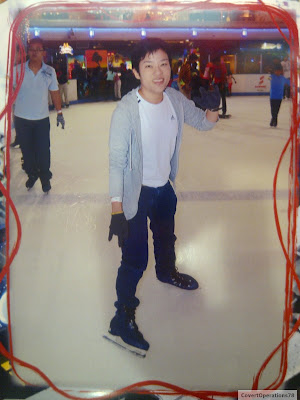 5th Dec 2012:
No cameras were allowed on the ice rink, so I bought this photo off the professional photographers plying their trade there. 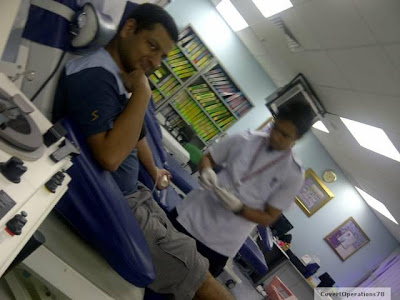 6th Dec 2012:
Aravind joined me for my customary birthday blood donation at the National Blood Bank. 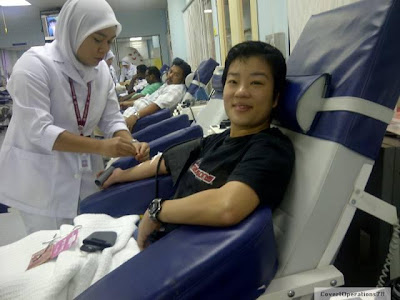 6th Dec 2012:
They took more from me this time around because I've gained weight. 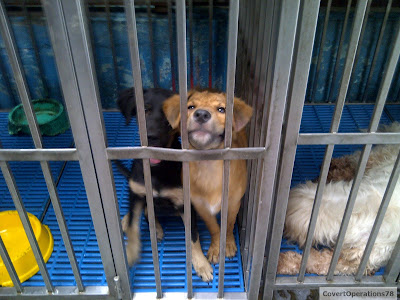 6th Dec 2012:
"Please take me home".
Little faces that greeted me as I was cleaning the SPCA kennels on a rainy afternoon. 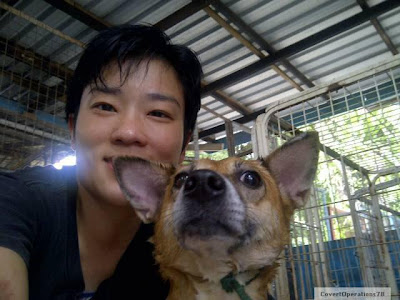 7th Dec 2012:
Success! Managed to bathe and tickwash all the Mummy Dogs at the SPCA kennels before it started raining again! My entire staycation has been at the mercy of the weather! 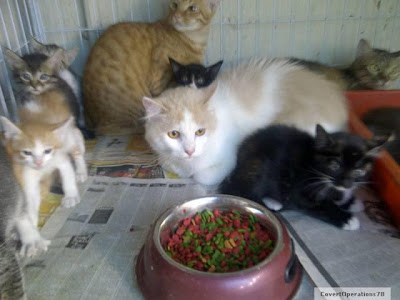 7th Dec 2012:
The holiday season also means we will see a higher number of animals being surrendered to our shelter. Please spay and neuter your pets and make boarding arrangements if you are going to be away. Please don't surrender them to a shelter to be euthanised. 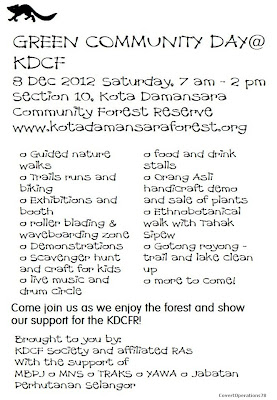 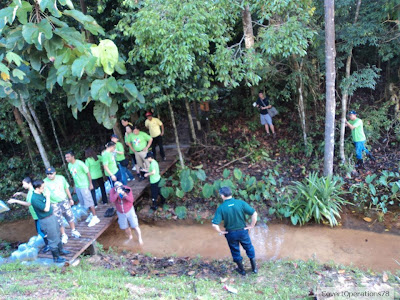 8th Dec 2012:
Volunteers cleaning up the forest trails and lake, and rehabilitating the stream and lake with indigenous catfish during the Kota Damansara Community Forest Society Green Community Day. 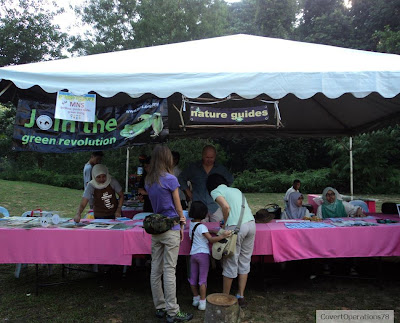 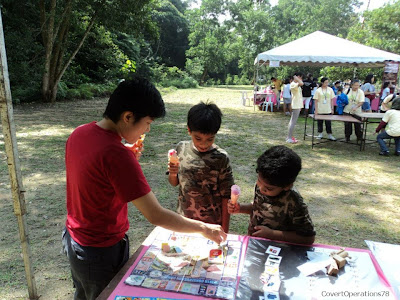 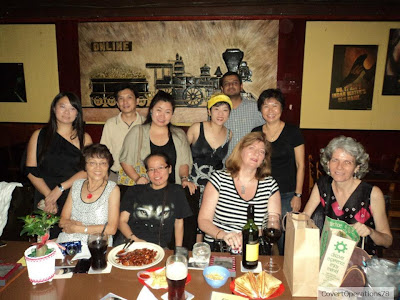 8th Dec 2012:
My early birthday party at Online Pub with some of my best friends! 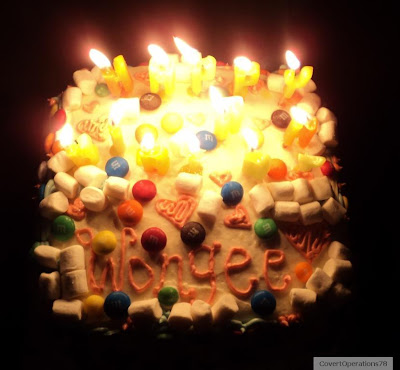 8th Dec 2012:
My awesome candy covered rainbow cake, designed by Aravind and made by Laura of Baking For A Cause! 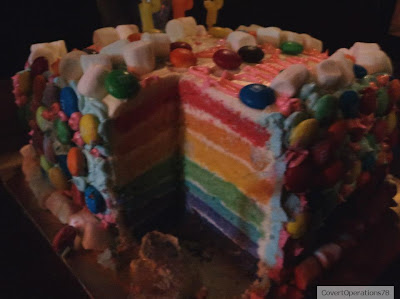 8th Dec 2012:
I've always wanted to know what a rainbow tastes like. This one tasted of vanilla and butter. 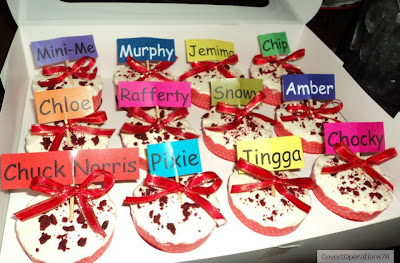 8th Dec 2012:
Lovely and meaningful red velvet cupcakes bearing the names of my canine and feline children past and present. This was Aravind's idea. The cupcakes were made by Jennifer's baking initiative, Buttery Bites, which raises funds for her rescued and foster dogs. 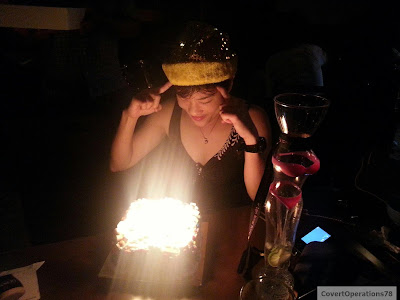 8th Dec 2012:
Colin Bala took this candid shot of me making a wish. You can be sure it was a pretty long wish that didn't leave out animals, marginalised groups, the environment or Liverpool FC. 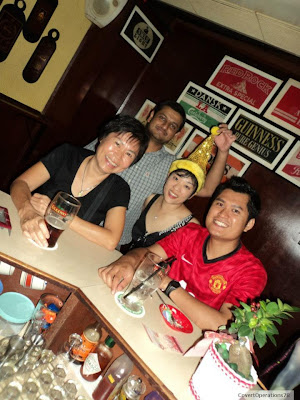 8th Dec 2012:
Having fun at my party with my buddies Aravind, Mary and Ilyas. 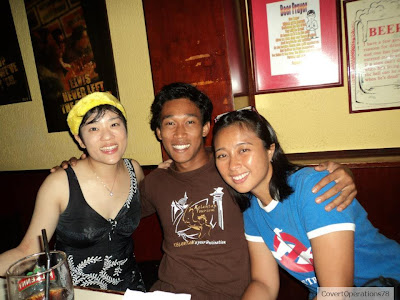 8th Dec 2012: Lan and Serina came all the way here for my party! I was thrilled and touched. 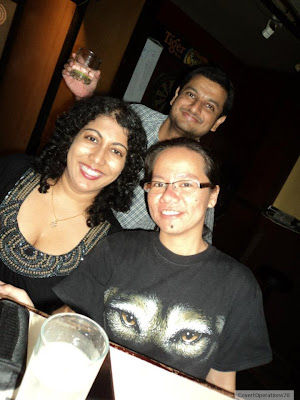 8th Dec 2012:
Aravind, Sasha and Audrey at my birthday party. 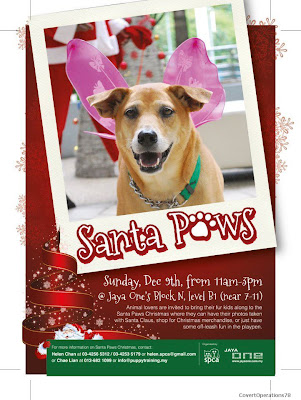 9th Dec 2012:
Official event poster for Santa Paws, a Christmas fundraiser organised by Jaya One Shopping Centre and the SPCA, to raise funds to neuter and care for the stray cats living around Jaya One. 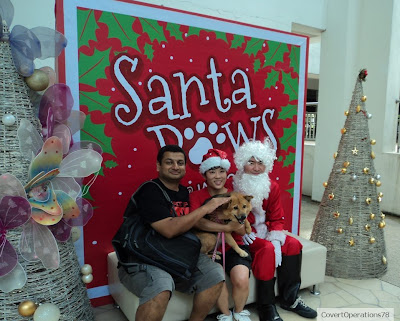 9th Dec 2012:
Amber came to see Santa Claus but felt a little nervous when it was actually her turn to meet Santa, so Aravind and I had to come with her and assure her that Santa is really a very nice guy. 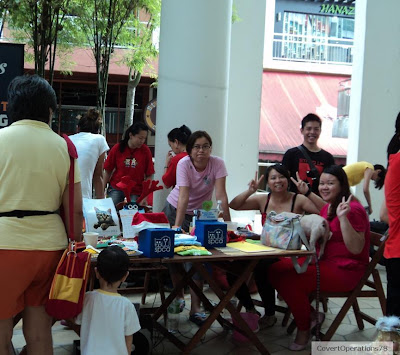 9th Dec 2012:
My SPCA buddies manning the SPCA booth. You can see Nicole has adopted a new poodle from an independent rescuer. The poodle was found with eye injuries but is fortunately recovering well, thanks to Nic's competence and care. 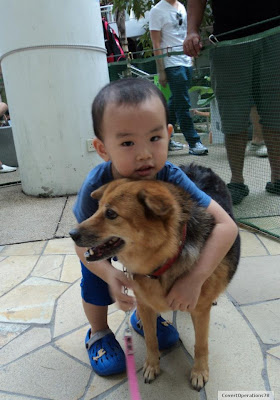 9th Dec 2012:
Amber chilling out with a new friend in the Off-Leash Playpen at the Santa Paws Christmas Fundraiser for Stray Cats. Amber loves children. Children love Amber. This toddler just walked up to Amber, petted her gently and then gave her a hug. 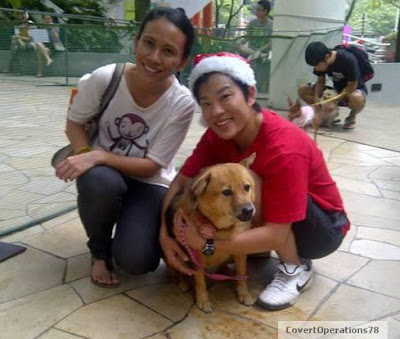 9th Dec 2012:
My friend Nik Waheeda stepped forward to help out as a volunteer photographer for the Santa Paws Fundraiser when I posted a last-minute volunteer appeal on my Facebook. Thank you so much for coming to help out, Nik. I hope you enjoyed yourself as much as we did. 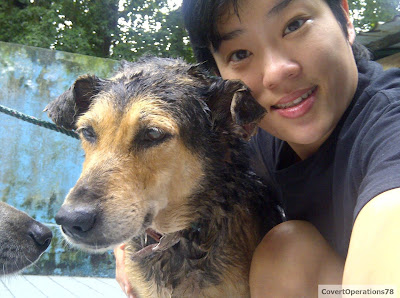 15th Dec 2012:
Bath Time for the Pound Doggies! I love you, Pound Doggies. I won't give up hope that people will come for you. Until they do, you'll still have me. 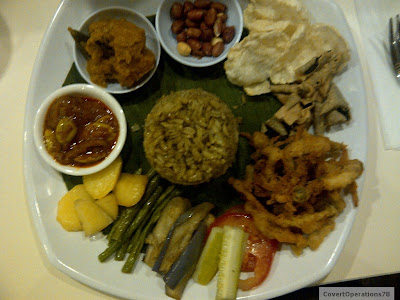 15th Dec 2012:
A post-birthday vegan nasi lemak treat at Greenlicious, thanks to my dear friends Liza and Ilani.
Posted by ~CovertOperations78~ at 16:23

Thank you for your kind wishes and compliment, Abang Rizal! I had a great week...fortnight...month... Everything!