Letter to the Editor - The Challenges Ahead: Safe & Sustainable Vegetable Farming

LETTER TO THE EDITOR:
THE CHALLENGES AHEAD: SAFE AND SUSTAINABLE VEGETABLE FARMING 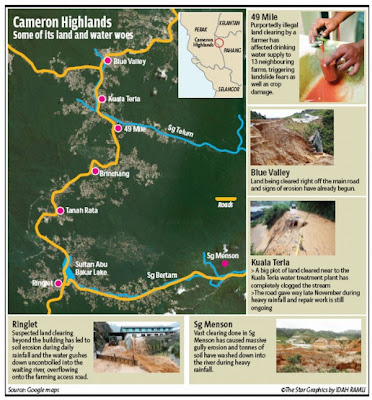 (Image reproduced from The Star, 13 Dec 2012, without permission but in accordance with the principles of fair use)


Once every few years, the media will report of rampant land clearing, water pollution, use of banned pesticides and environmental degradation in the Cameron Highlands as a result of intensive agricultural activity (Cameron Highlands in terrible shape due to land clearing and water pollution, The Star, Dec 11 2012). This draws attention to the challenges of reconciling food security with environmental integrity.

In their research paper published in 2009, Drs. CJ Barrow, Chan Ngai Weng and Tarmiji Masron had pointed out that the expansion and intensification of farming in the Cameron Highlands had seriously polluted streams and groundwater with sediment, manure-enriched runoff, agrichemicals and sewage. The same report found that large numbers of vegetable growers were reported to be using banned pesticides imported from Thailand and other countries, as illegal agrichemicals are seen by the farmers to be cheaper and more effective. In addition, the preference for uncomposted chicken manure over chemical fertilisers by the vegetable farmers of Cameron Highlands has resulted in an increase of pathogens, veterinary pharmaceuticals and faecal pollution in streams, groundwater and produce.

It is acknowledged that stronger enforcement is necessary to monitor illegal land-clearing activities and mitigate environmental damage caused by the vegetable farmers in Cameron Highlands (Uphill task to ensure farmers do what’s right, the Star, Dec 11 2012). Yet there is so much more that consumers, retailers and policymakers could do to improve environmental quality and food health and safety standards.

In the aforementioned 2009 research paper, it was averred that media and legislation have had “less effect” in reducing agrichemical use than supermarket checks of produce. Supermarkets and major food retailers have a high level of influence and control over food quality and safety. Major retailers are therefore urged to ensure that their vegetable supply comes from farms which reach accepted health and safety standards and is checked for pesticide use and residues. Certification schemes such as the “Assured Produce” scheme practiced in the United Kingdom would help promote safer and more environmentally responsible methods of vegetable farming among major vegetable farms in Malaysia. Supermarkets should prohibit the use of banned pesticides by vegetable farms that supply produce to them, and make public the results of their own microbial and pesticide residue testing in a way that is accessible to the average consumer to enable consumers to make informed choices, bearing in mind that not everyone has the advantage or leverage of choosing organic over conventional produce.

Vegetable farms should be given incentives (such as accreditation) for employing responsible practices, such as drip irrigation to conserve water use and crop rotation to improve soil quality, and for meeting best management practices for pesticide storage and use. All manure used should be properly composted and incorporated into soil to prevent microbial contamination. To minimise pest damage, farmers could be educated on methods such as constructing protective barriers, encouraging biological pest control, choosing pest-resistant crop varieties and the use of “trap crops” to lure pests away from main crops. Regulations must be implemented to minimise pesticide drift to other crops and off-site areas and to halt pesticide applications during rainy and windy seasons.

Measures taken by the authorities apart from enforcement measures against farmers could include creating sediment traps to capture contaminated runoffs before they flow into streams, perhaps by way of constructing reed or water hyacinth beds. Buffer zones should be demarcated around sensitive zones. All potential sources of contamination should be identified and eliminated, or at least managed.

Food security and safety are public policy issues, and sound public policy decisions require an understanding of long-term social, environmental as well as economic consequences. Rising environmental literacy, changing consumer preferences, legislation and enforcement are all powerful forces that have the potential to create advances in agriculture that do not compromise human or environmental safety.

Excellent write up. We were at CH last few weeks and did noticed how bad is the current technology of farming up there ...(ikut suka aje ...) ...

Thank you very much for your support and encouraging words, Abang Rizal. Malaysians never learn. In a few weeks, we will forget, and then in another year or two the media will report of contamination and other issues again. Consumers must learn the power that they hold and act accordingly in the best interests of society and the environment.