The following is my brief review of Raptor Watch 2014, which took place last weekend (8th - 9th March 2014). This marks my 13th year as a Malaysian Nature Society Raptor Watch volunteer, and my 9th year as the coordinator of Green Living.
Raptor Watch and MNS have both come a long way (as an ecotourism event and environmental organisation, respectively) and the level of raptor awareness now is really very heartening to see. My hope for Raptor Watch is that it becomes more than just a tourist event and encourages and promotes citizen activism and hands-on volunteering. I hope to see more of the local community involved in surveys, data collection, beach cleanups, petitions and Citizen Science activities.
Good things that made Raptor Watch 2014 memorable, and which I hope will be repeated in the subsequent years:
(i) RIDE-SHARING! For the first time, the MNS Secretariat provided a bus in which to transport the staff and volunteers. I hope this will be continued in the interests of environmental responsibility and volunteer welfare.
(ii) Volunteer accommodation -- We got to stay in PNB Ilham Resort this time, which is a lot more convenient and comfortable than staying in other resorts and having to lug our things to the event grounds and back each day. I remember the early days when we had to stay in the deplorably run-down PD Marina apartments, and in the quaint government quarters where we had to cook and prepare our own meals after a long day of volunteering because meals weren't provided.
(iii) It was good to see more people being aware of the availability of the water refill stations, and most visitors and volunteers did come prepared with their own water bottles. It was also good that we did not provide cups, because this compelled people to reduce waste.
(iv) It was one of the most low-waste events ever, despite the sheer number of visitors. Most of the waste could be recycled or reused. I was, however, a bit concerned over the fact that not all the recycling bins provided by PNB Ilham Resort were put to use the way they were intended, and there wasn't enough waste separation going on. There's always room for improvement but I am happy we didn't do too badly, and the event on the whole was very professionally run thanks to Andrew and his capable team.
(v) It was good to see more of the local non-profit environmental organisations such as MYCAT and the Turtle Conservation Society being represented at this major ecotourism event. I hope in future we can also offer booths to CETDEM, Gerai OA and other local environmental groups for their fundraising, awareness and outreach work. 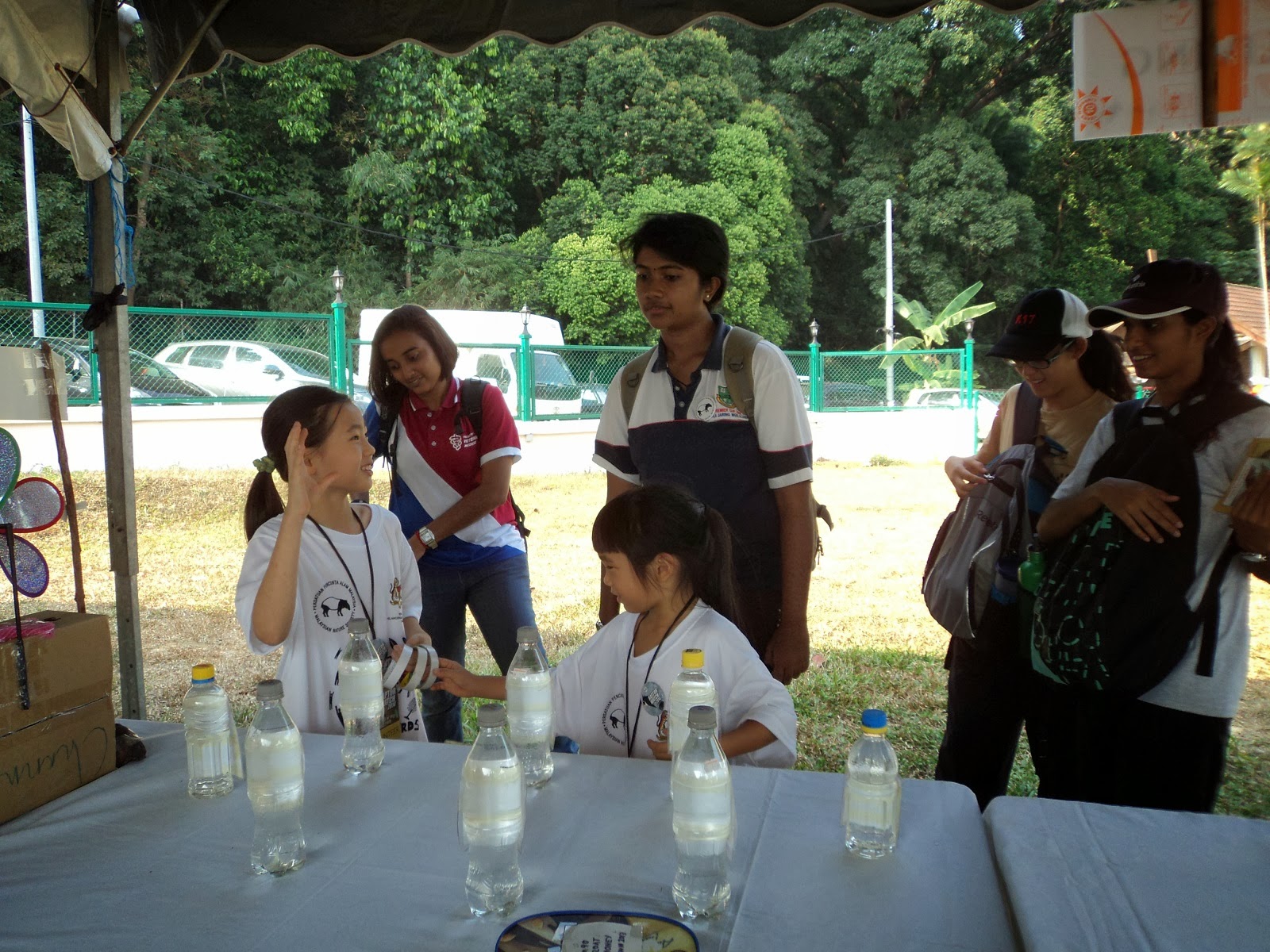 Zhang En briefs visitors at the Green Living booth. I can retire and let her take over as coordinator now. 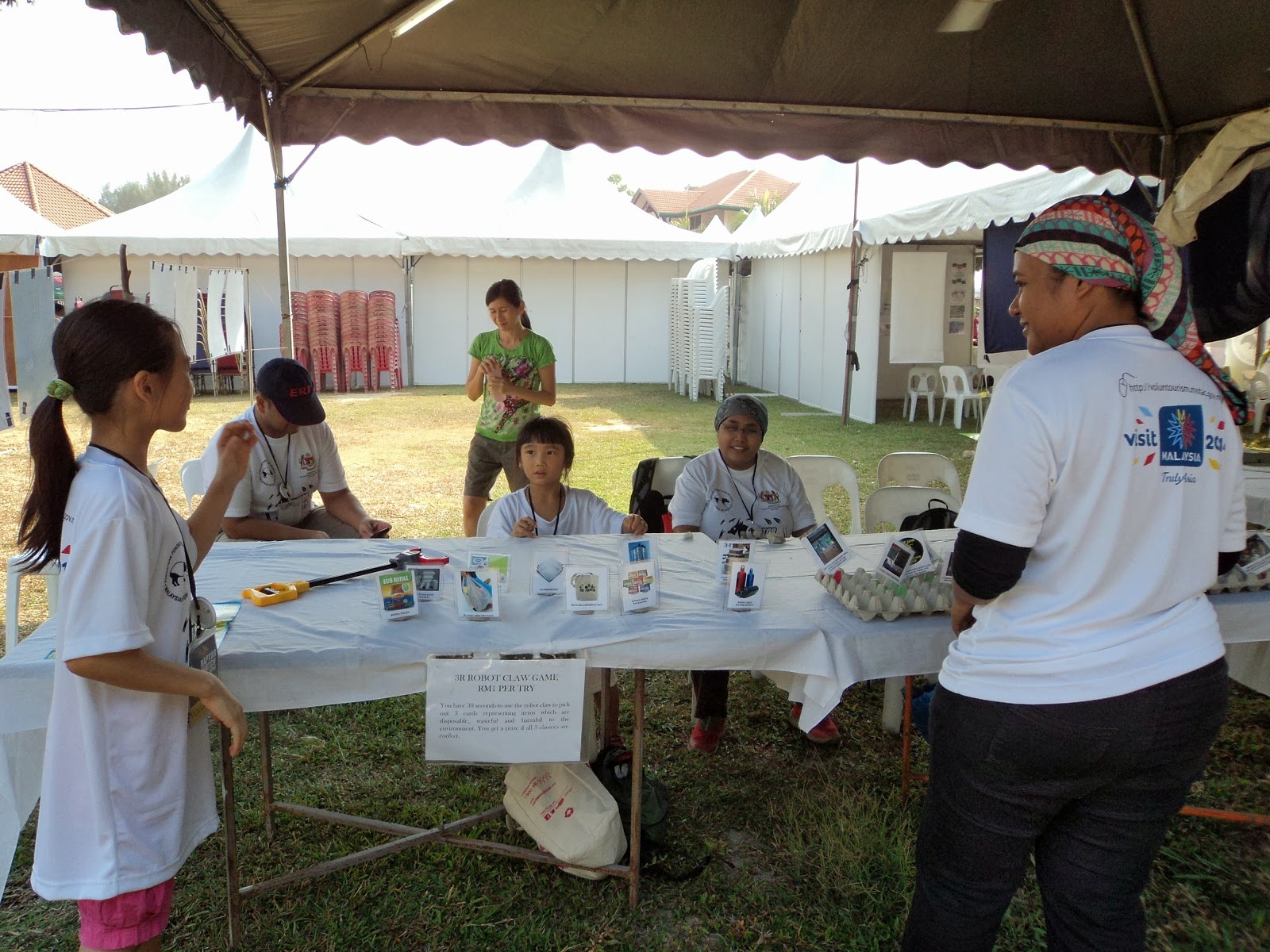 Green Living volunteers -- Zhang En, Aravind, Zhang Hui, Shannon, Illani and Liza -- having a powwow at our booth before the next batch of visitors arrive. 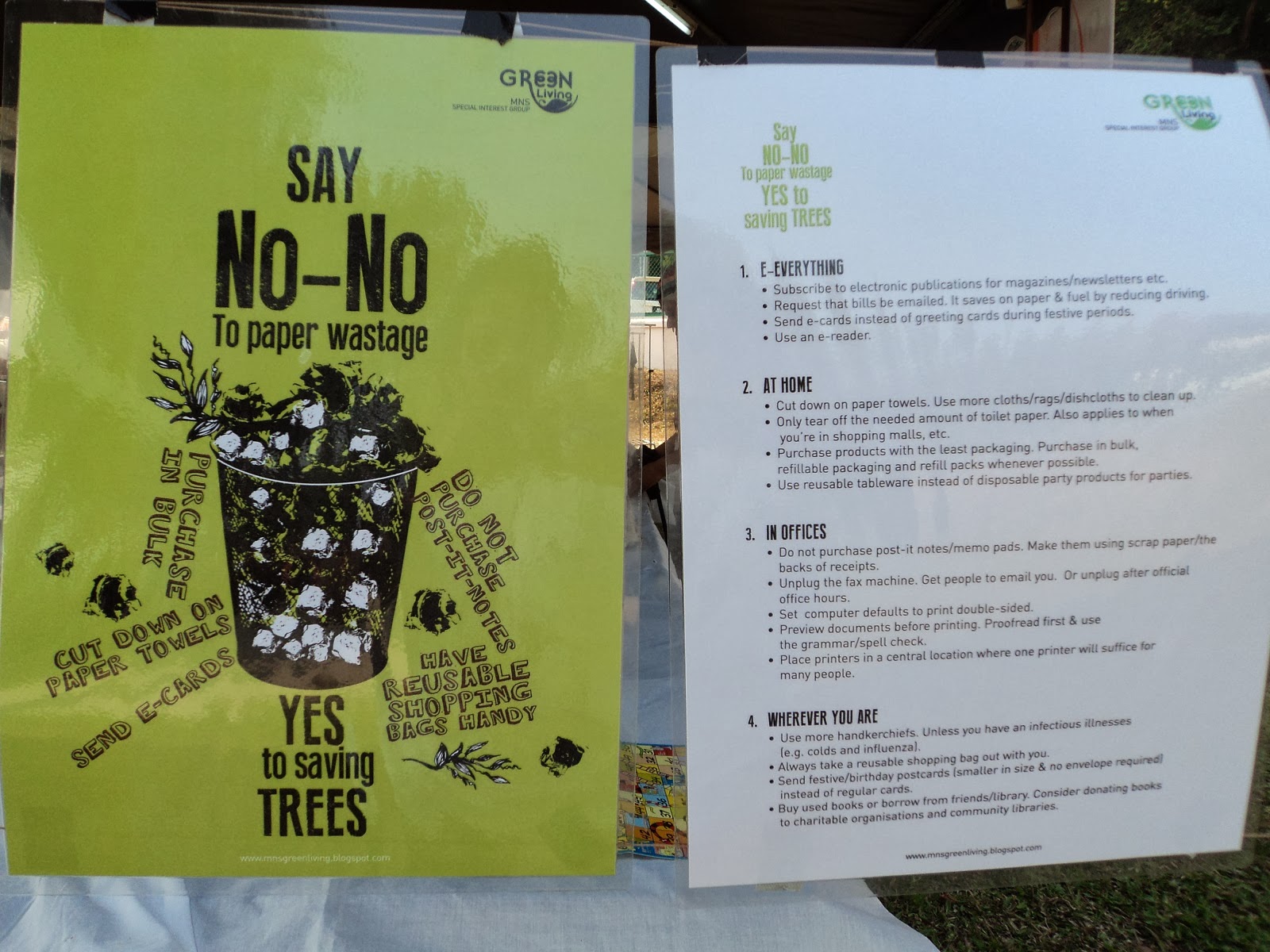 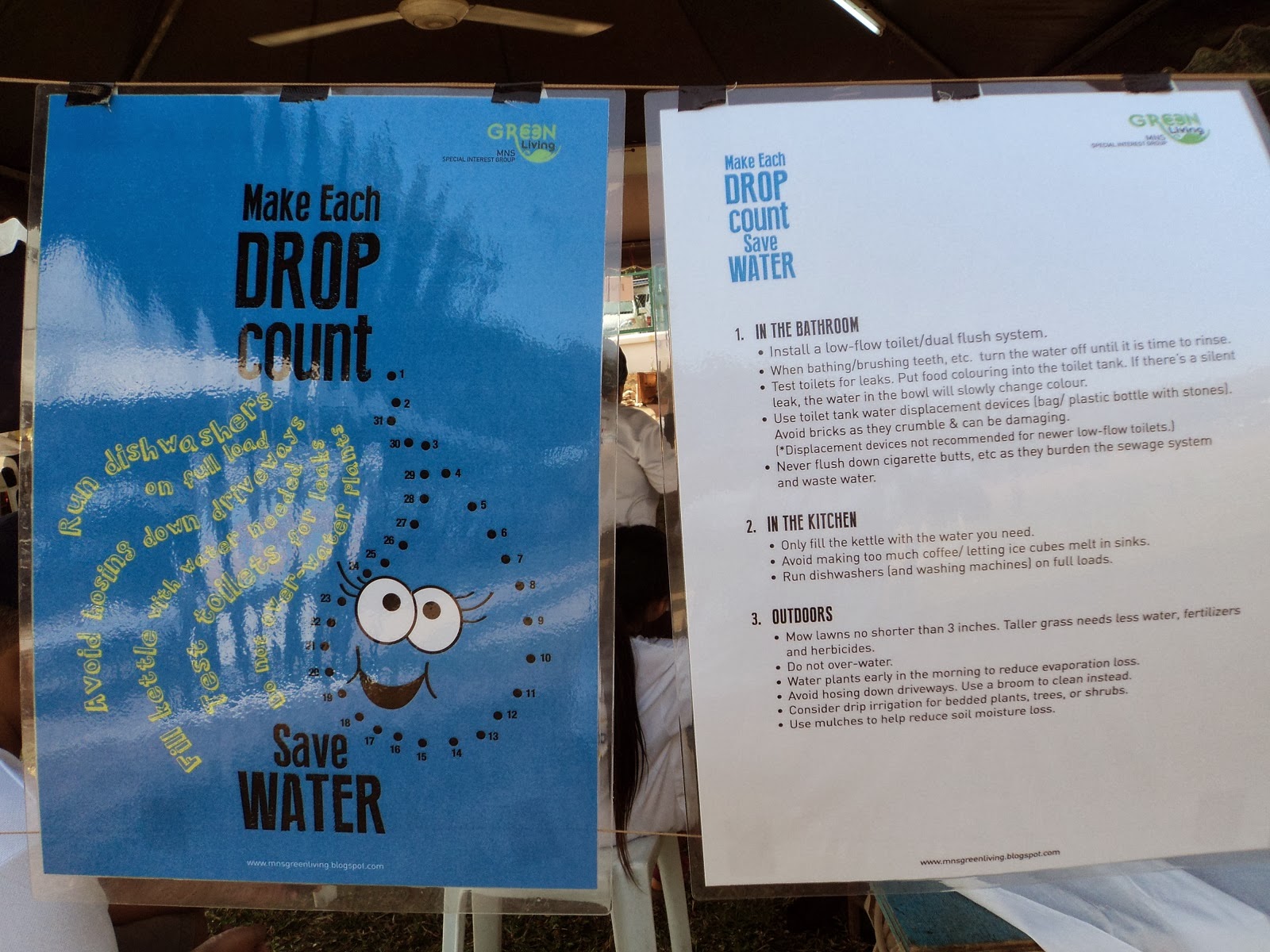 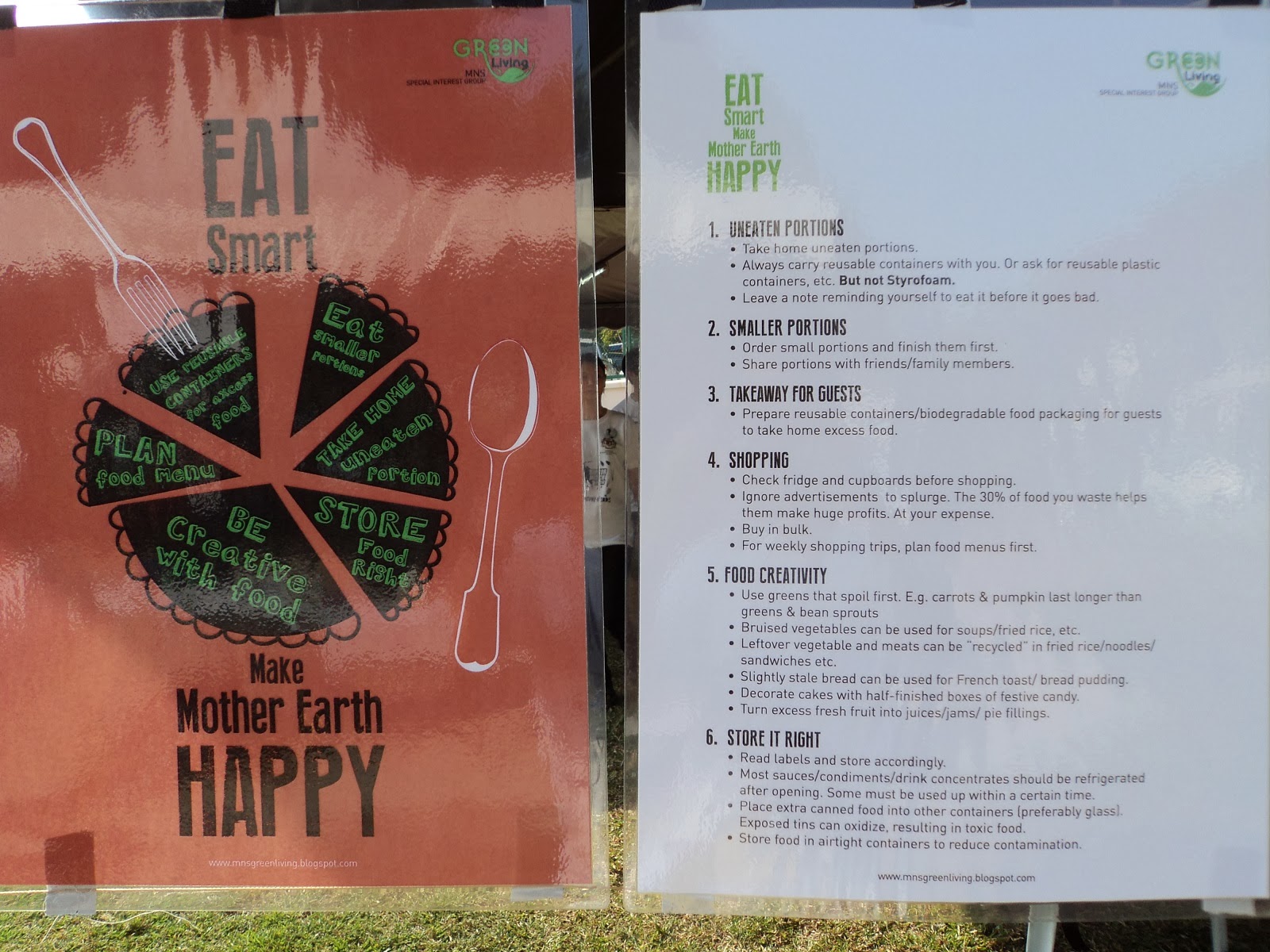 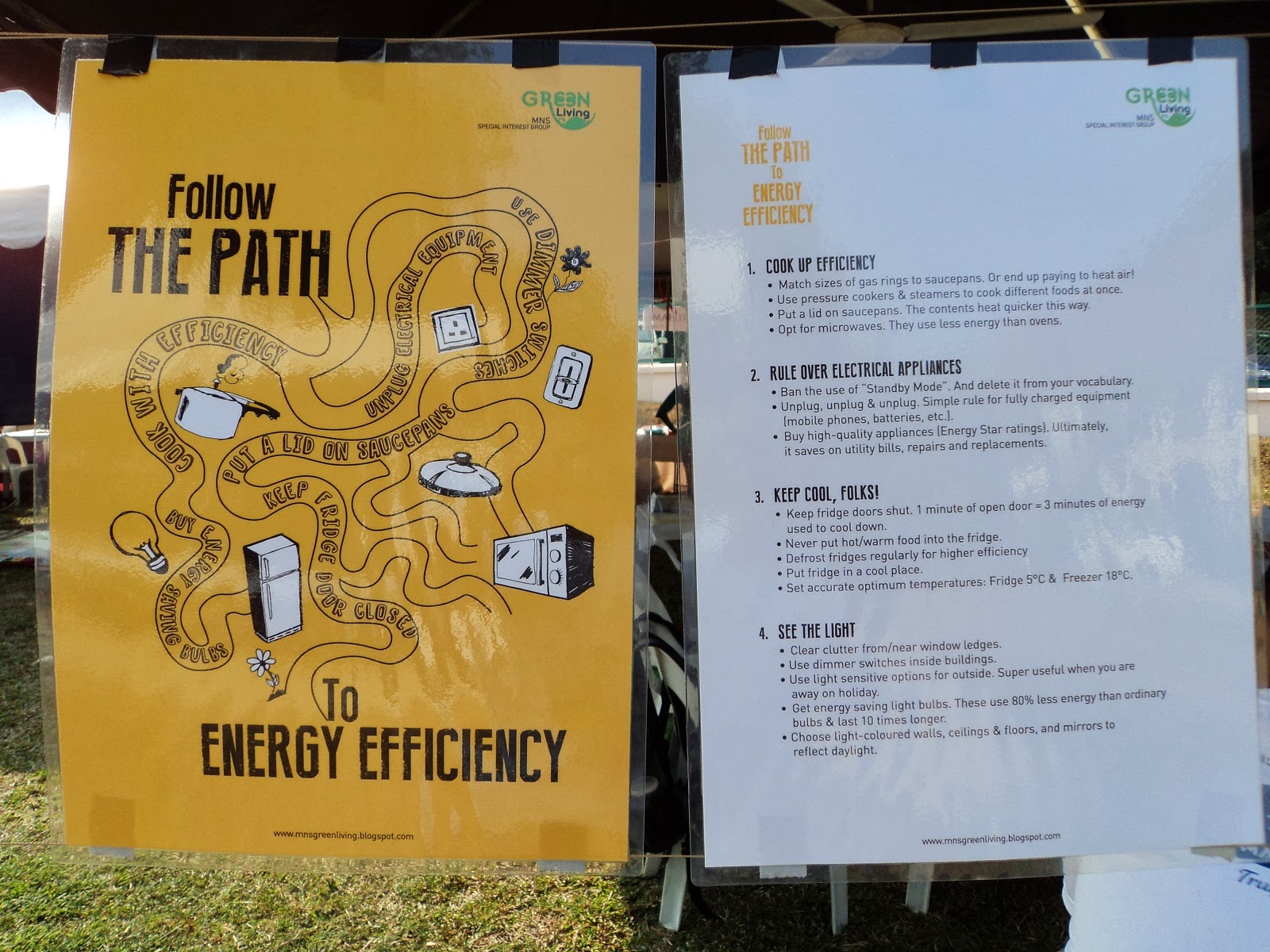 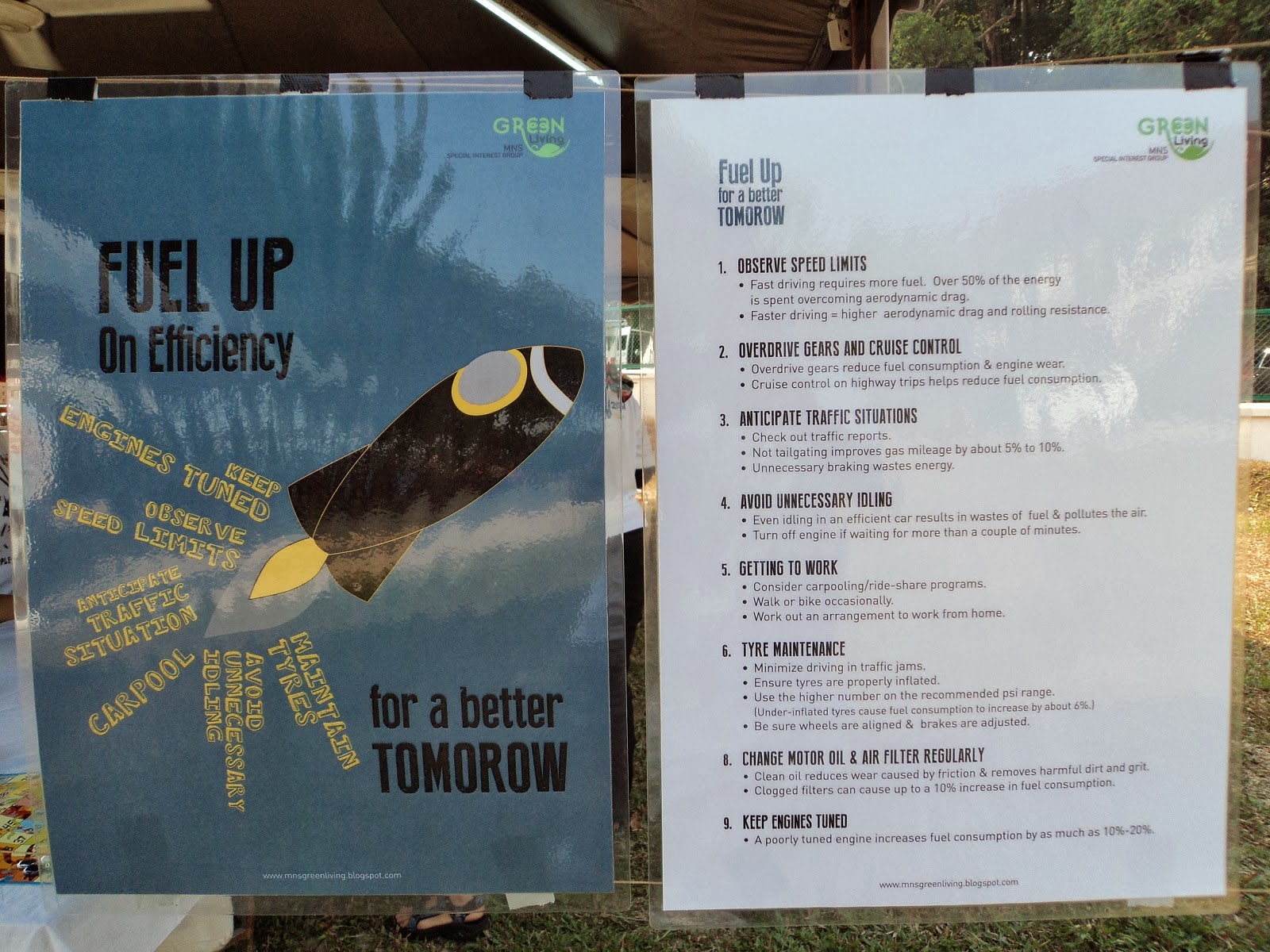 New posters for our booth -- Thanks to our graphic design maven, Liza Manshoor (who also happens to be one of my best friends and a very dedicated volunteer)! 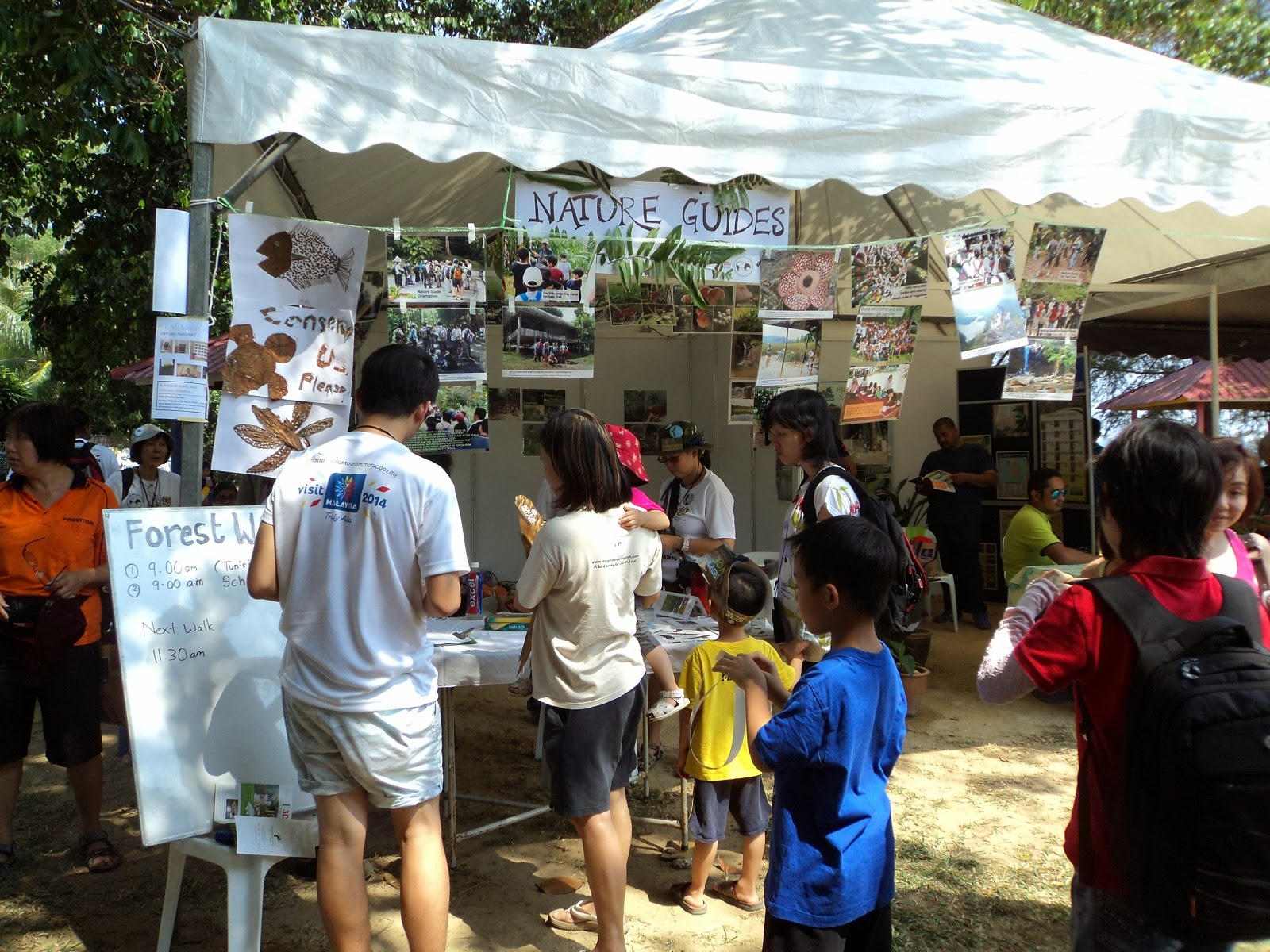 MNS Nature Guides registering participants for the Jungle Walk at their booth. 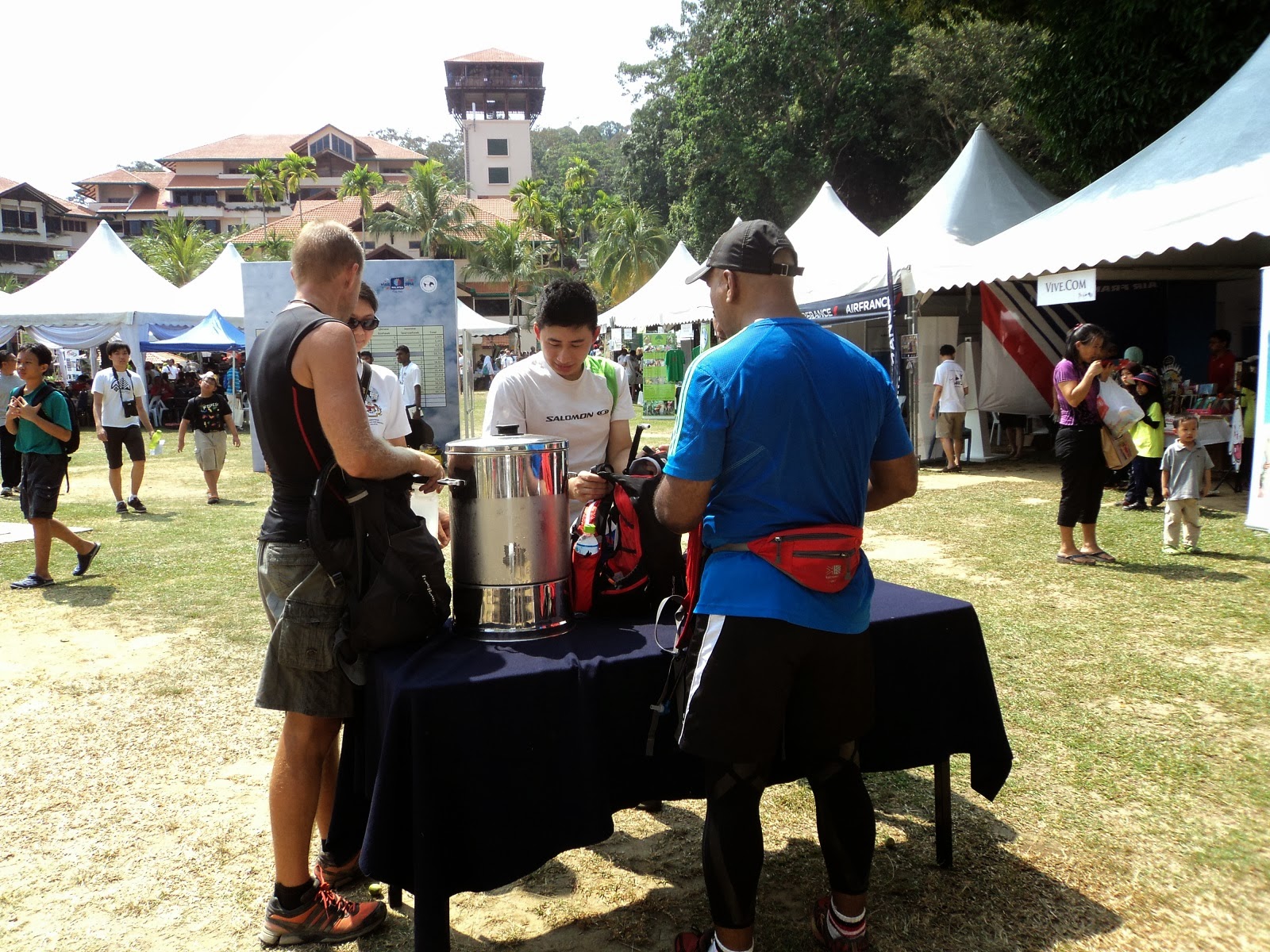 It was good to see everyone making use of the Water Refill Stations! 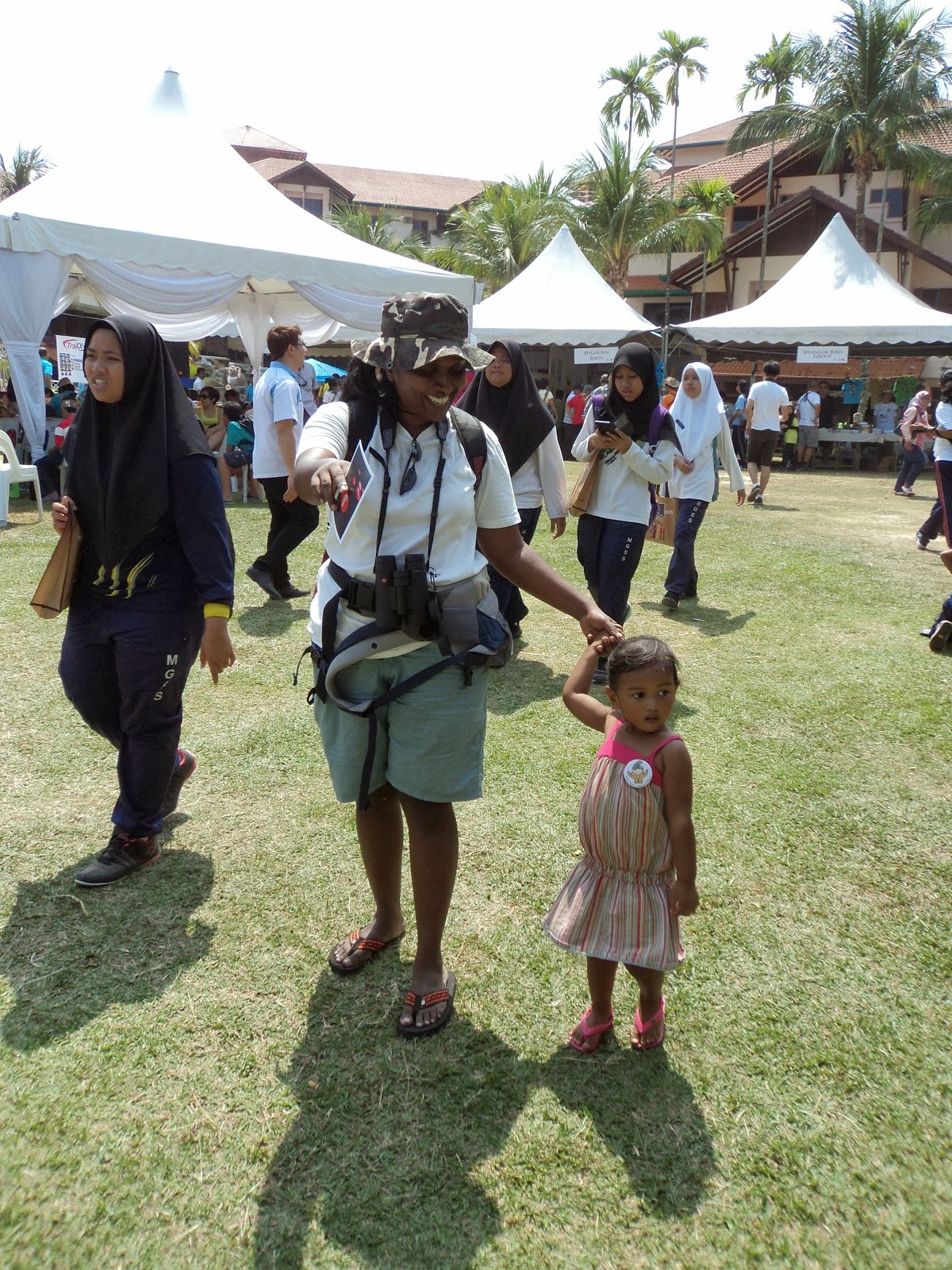 Look who's here! Our friends Loretta and Rayven came all the way to Tanjung Tuan to support our efforts! 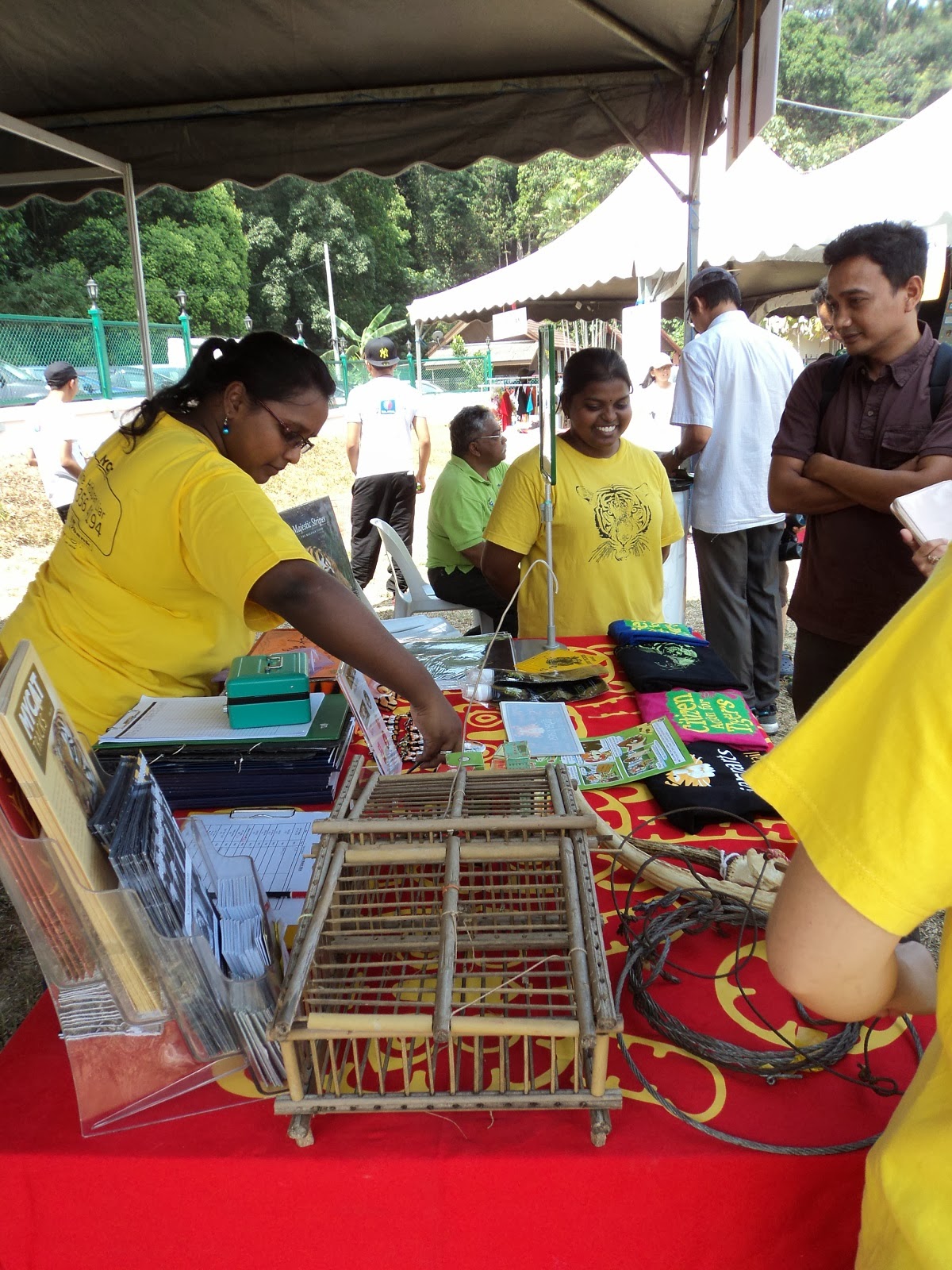 Wildlife snares and traps on display at the MYCAT (Malaysian Conservation Alliance for Tigers) booth to raise awareness on wildlife crime. 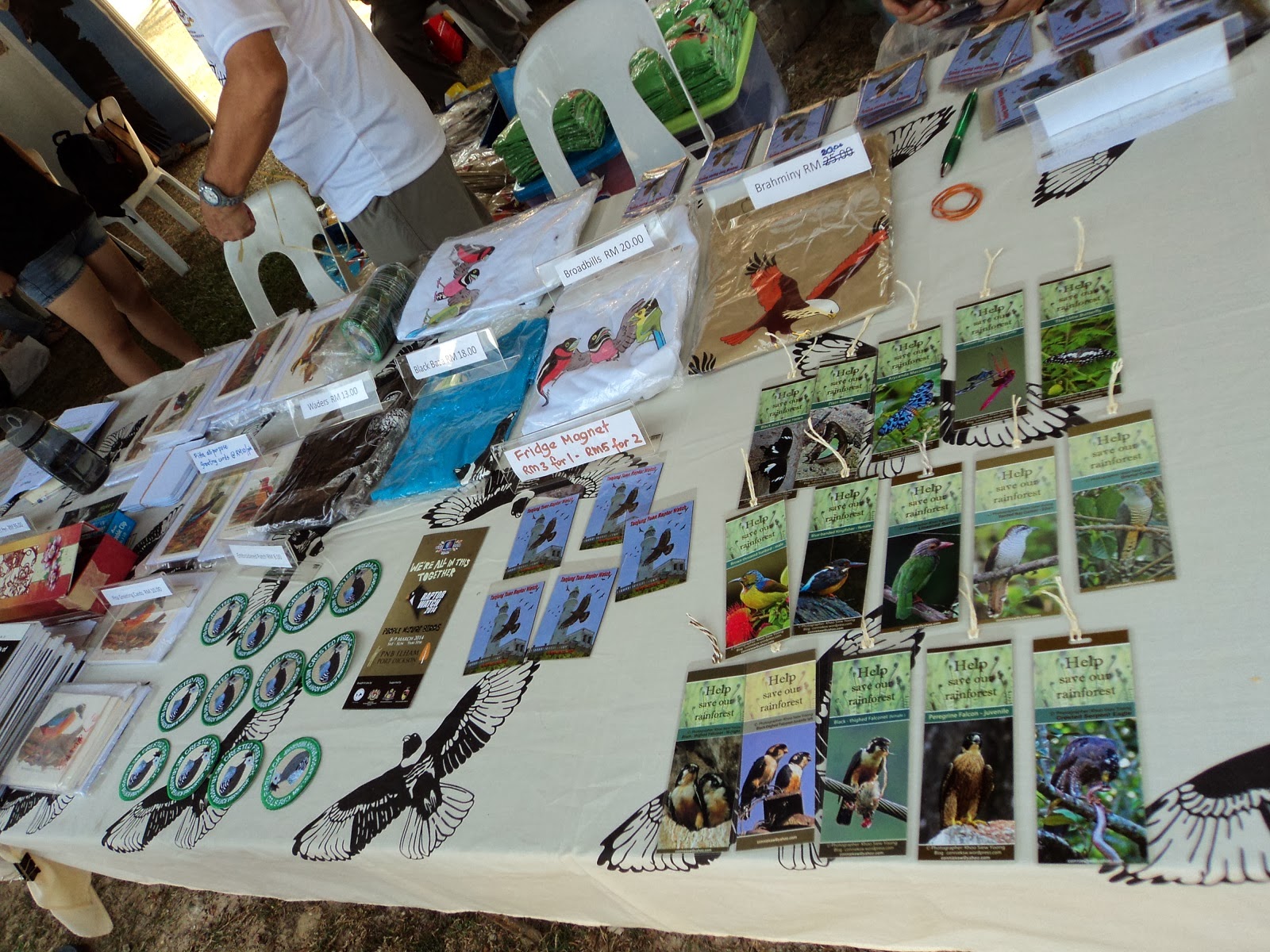 Bird-themed merchandise at the MNS Bird Group﻿'s booth to raise funds for their educational activities and trips. 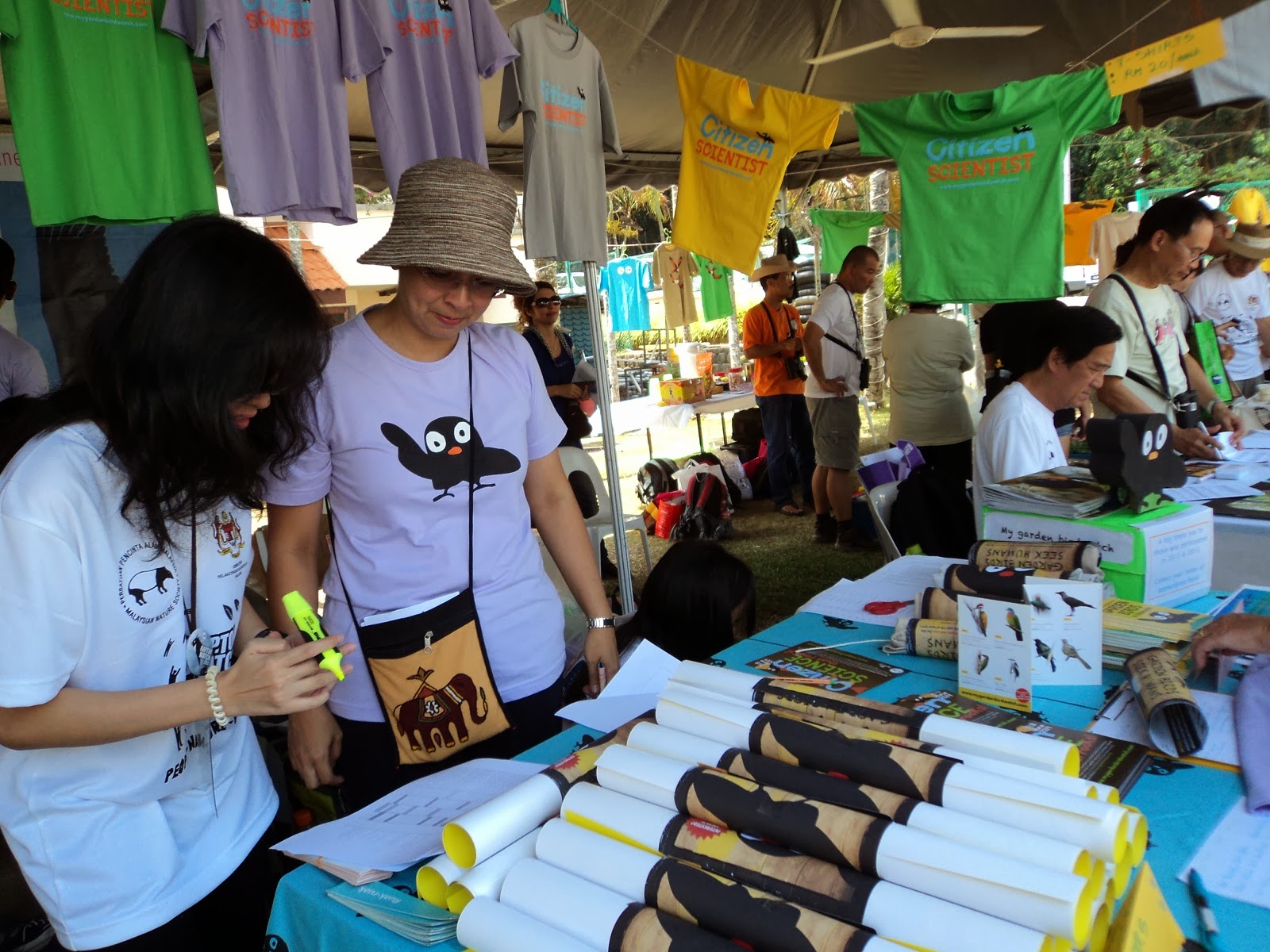 At the MY Garden Birdwatch﻿ registration booth. I received a free t-shirt as a token of appreciation as this is my 5th year as a MYGB participant. 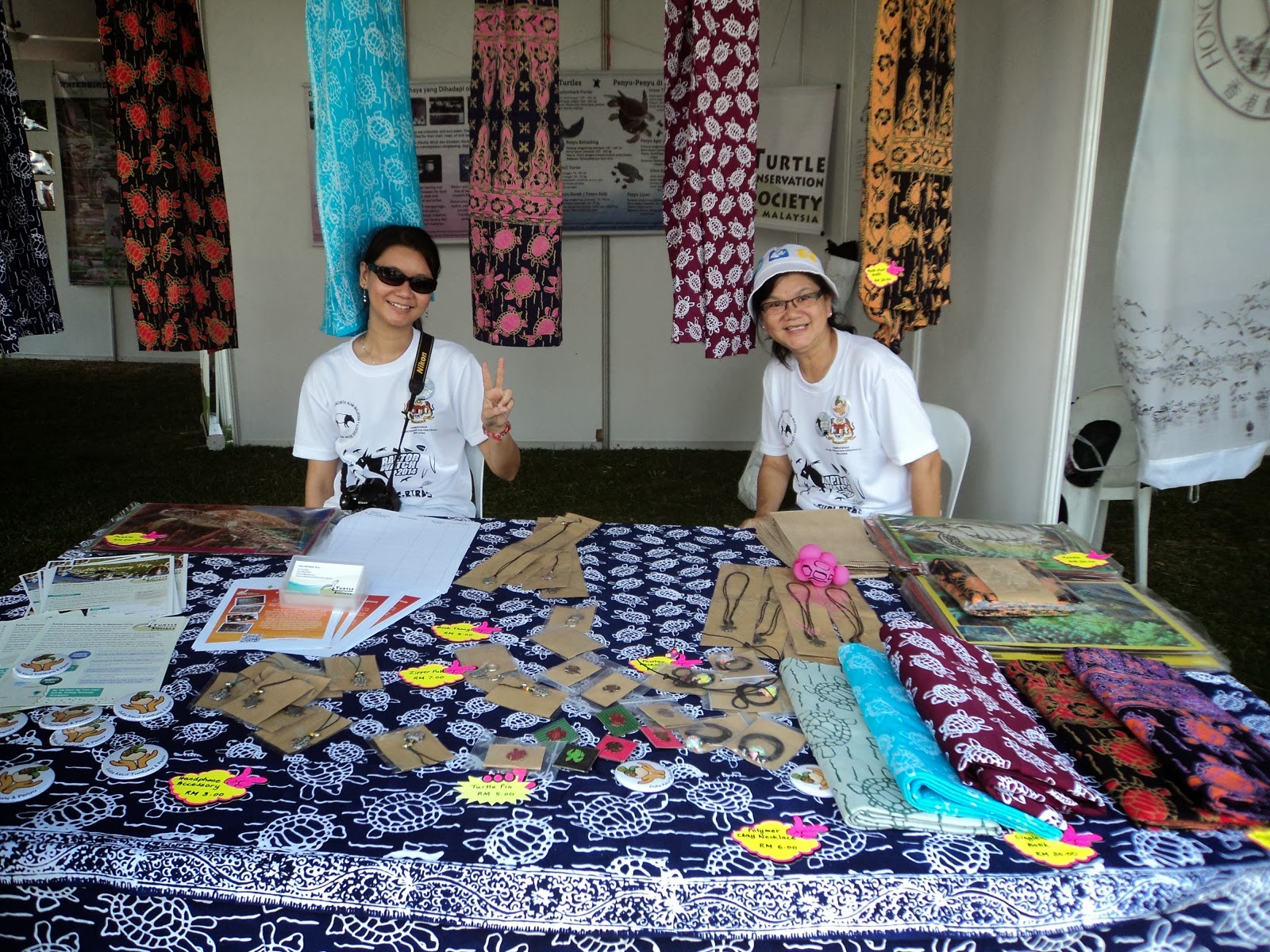 Pelf Nyok﻿ and her awesome mum at the Turtle Conservation Society's booth. I did most of my shopping here ;) 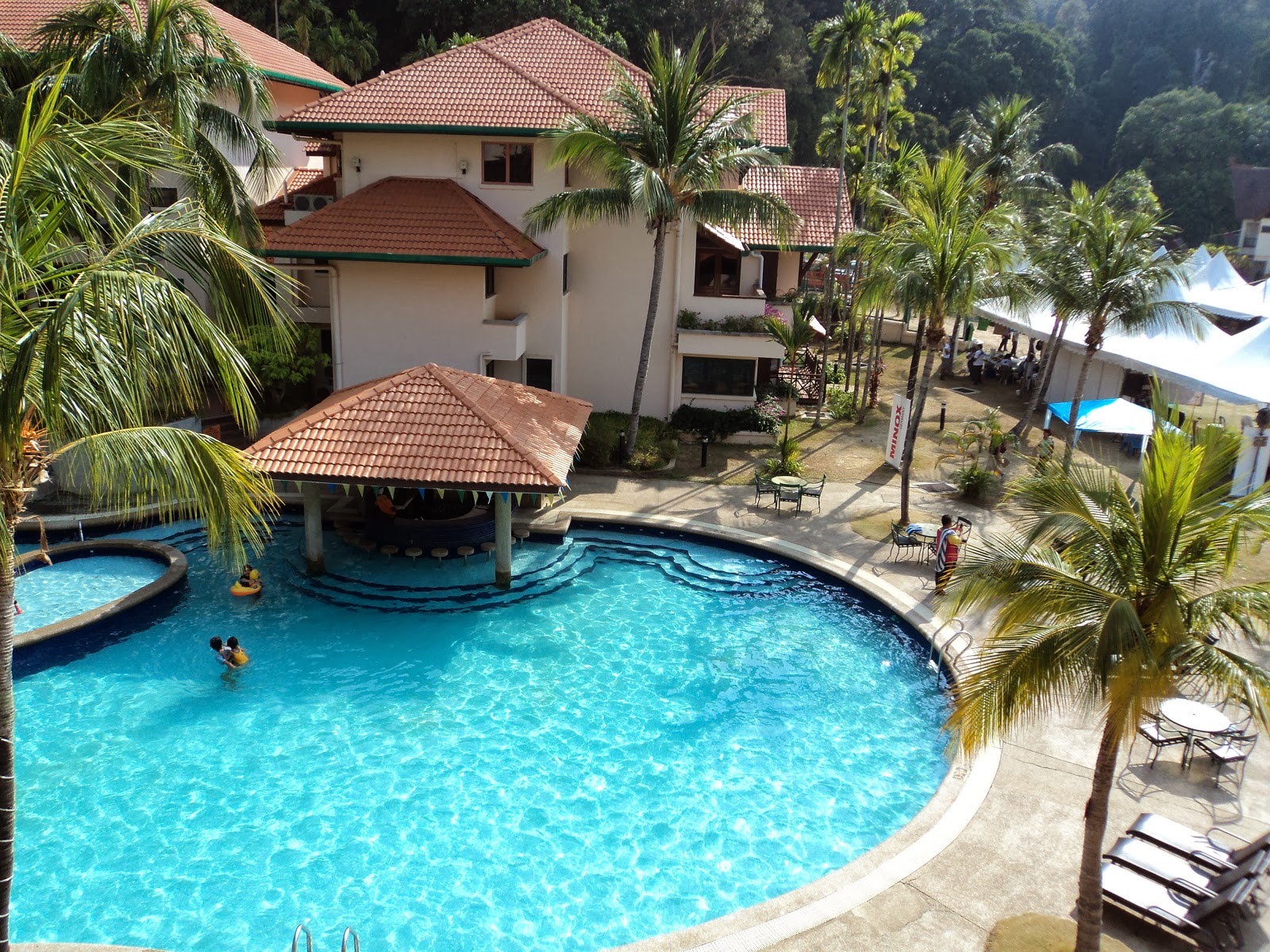 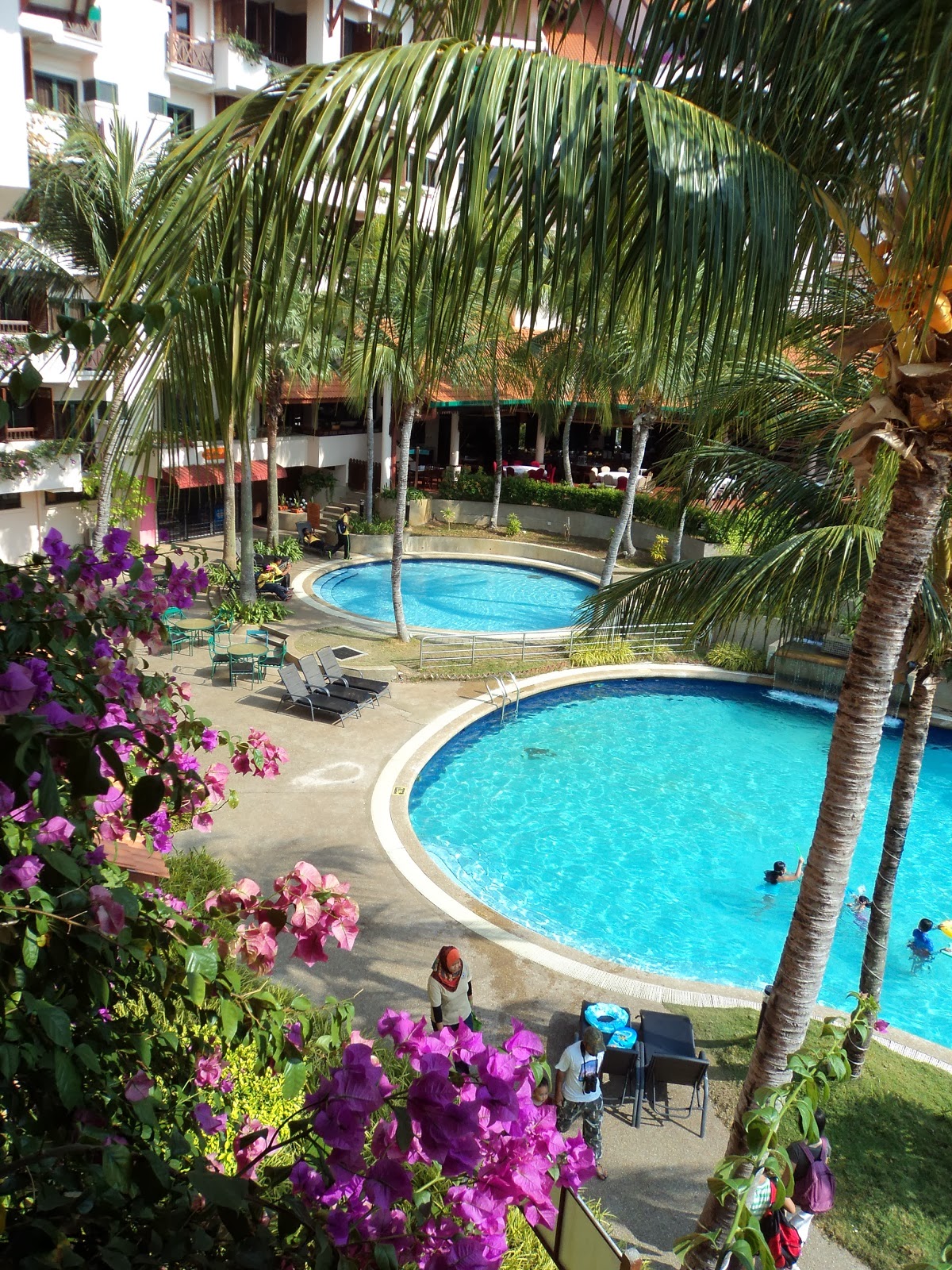 The view of the PNB Ilham Resort swimming pool from our apartment unit. 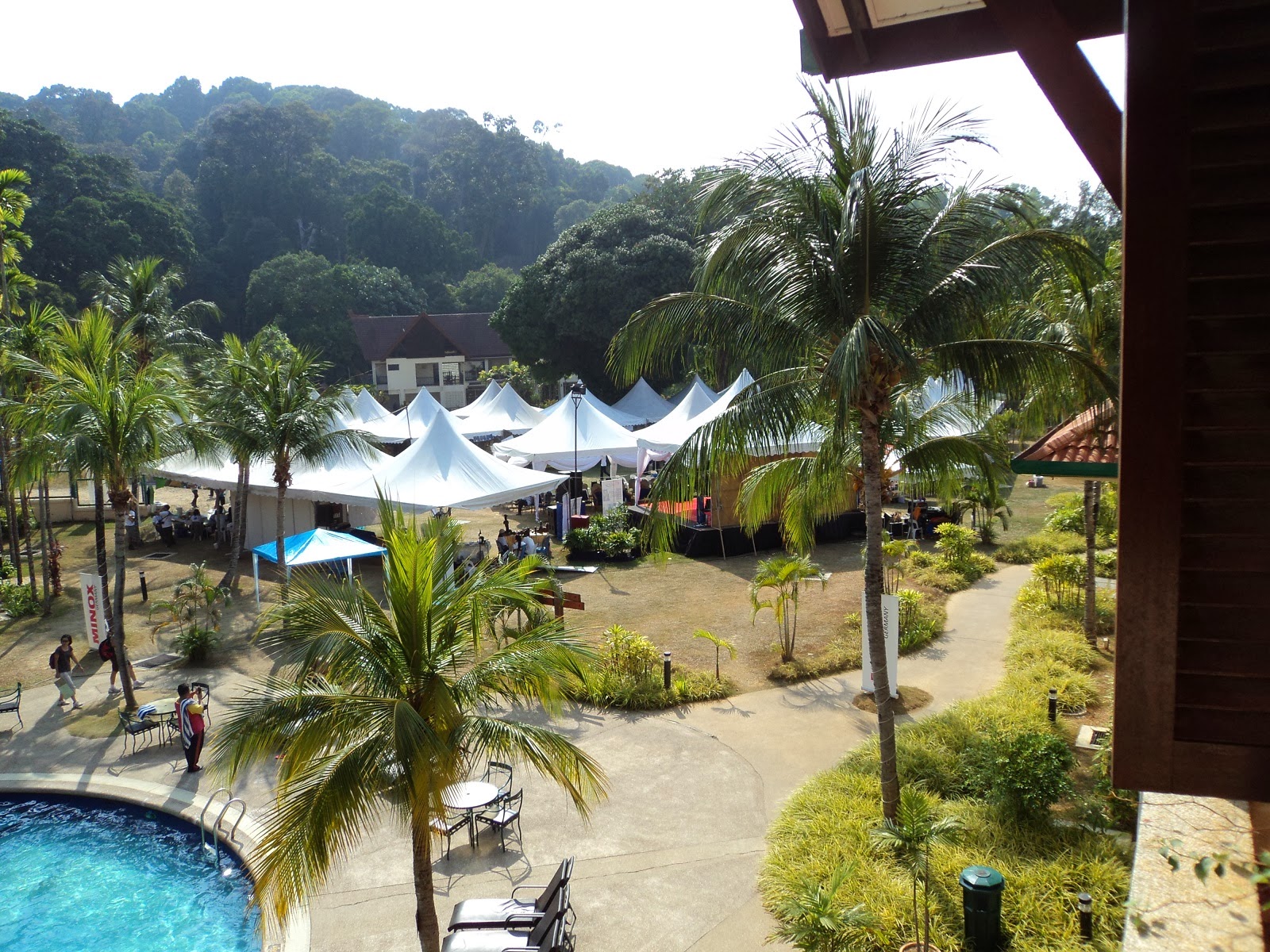 The view of the event grounds from our apartment unit on the 3rd floor. 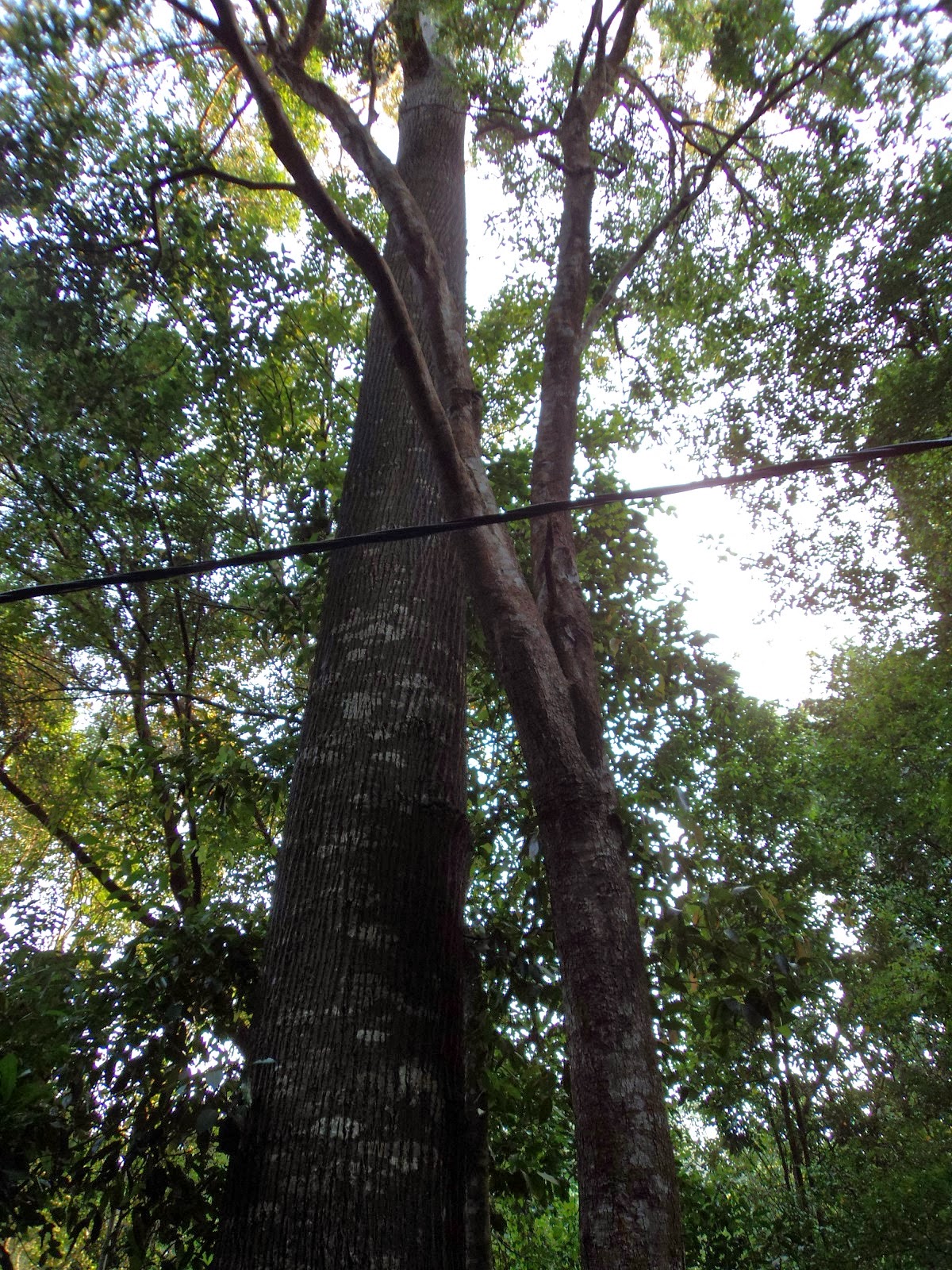 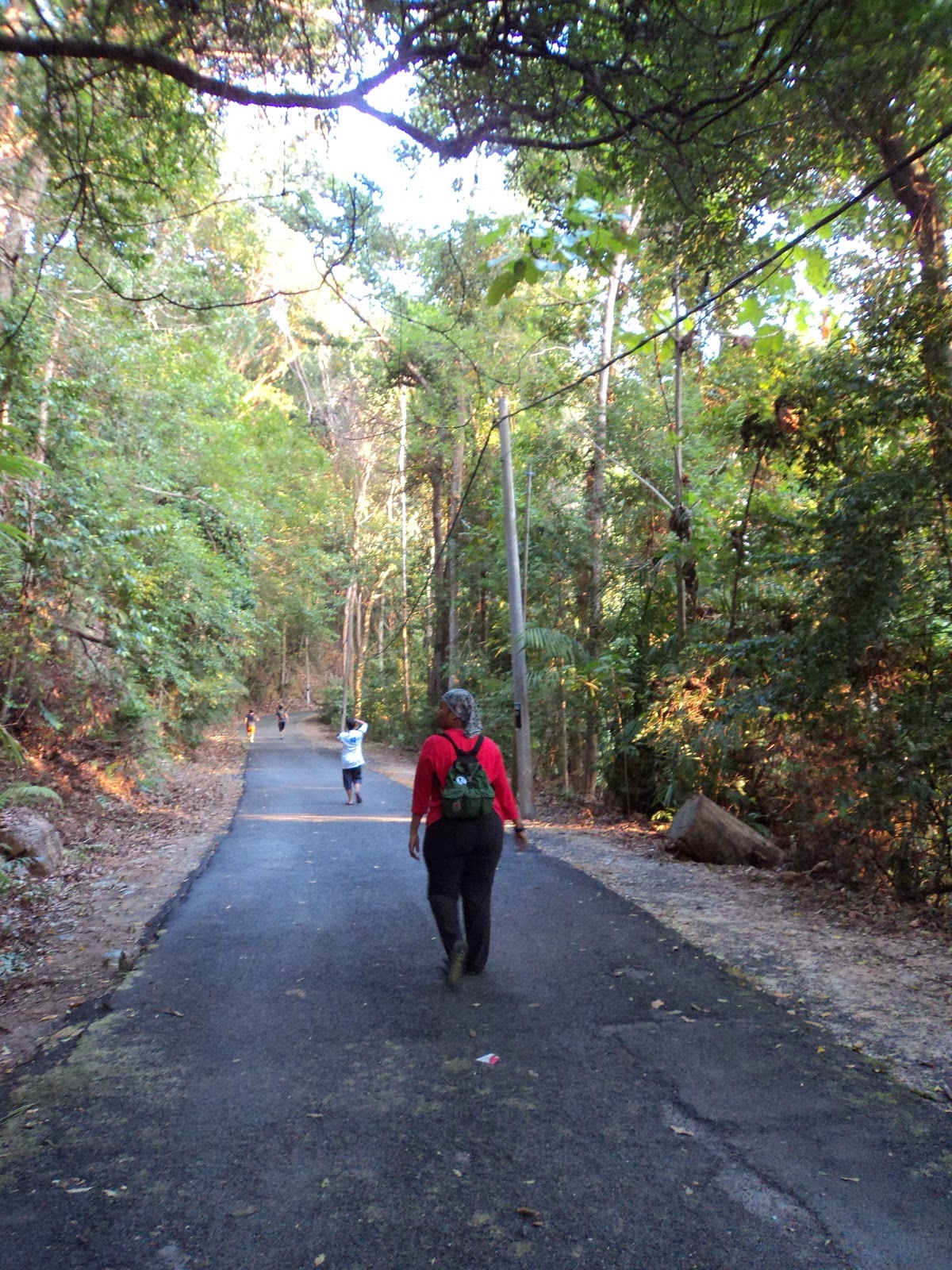 Eunice, Liza and I walking up to the lighthouse after our official duties were over. 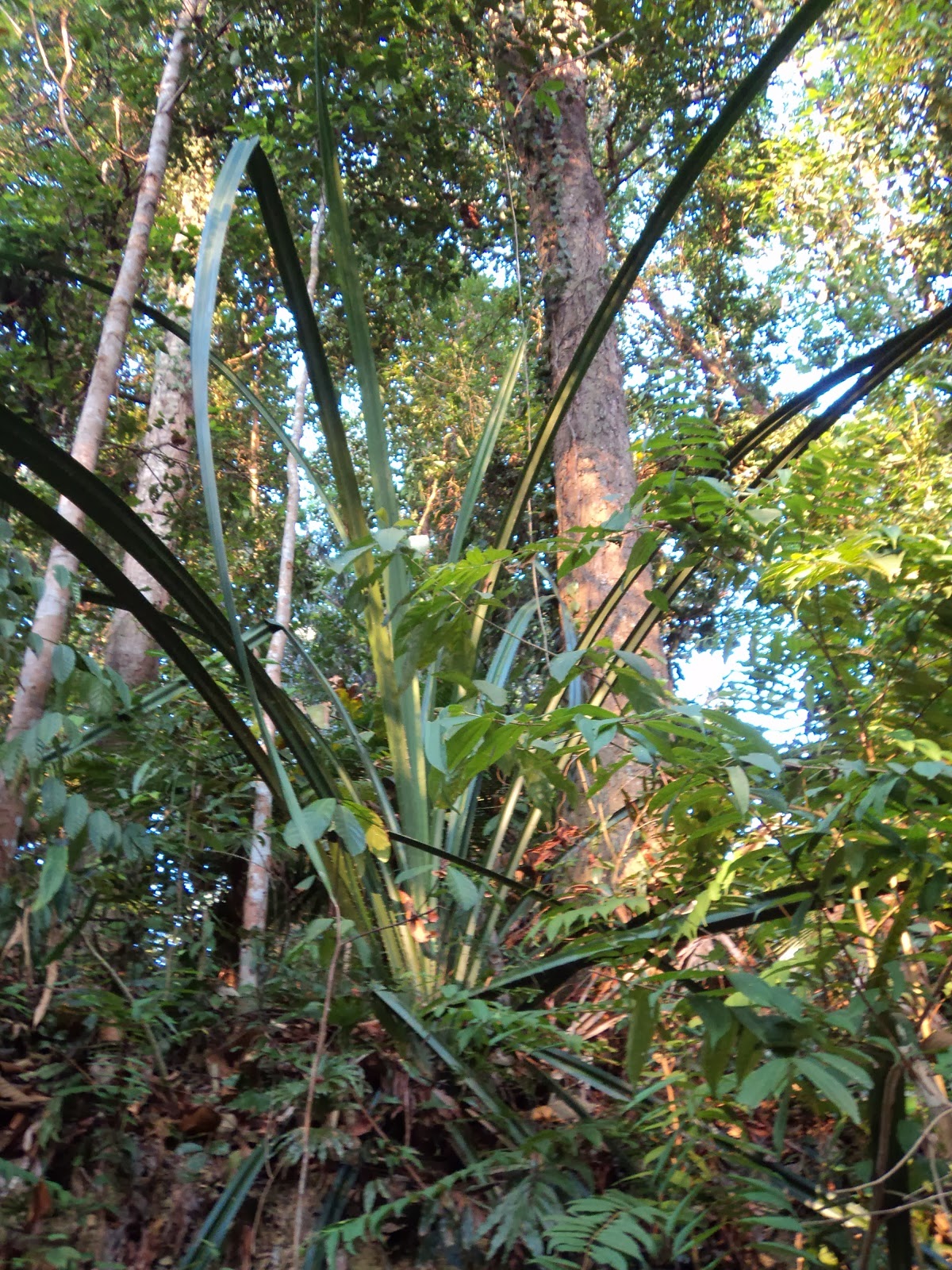 A big-ass mengkuang (Pandanus) plant in the forest reserve. 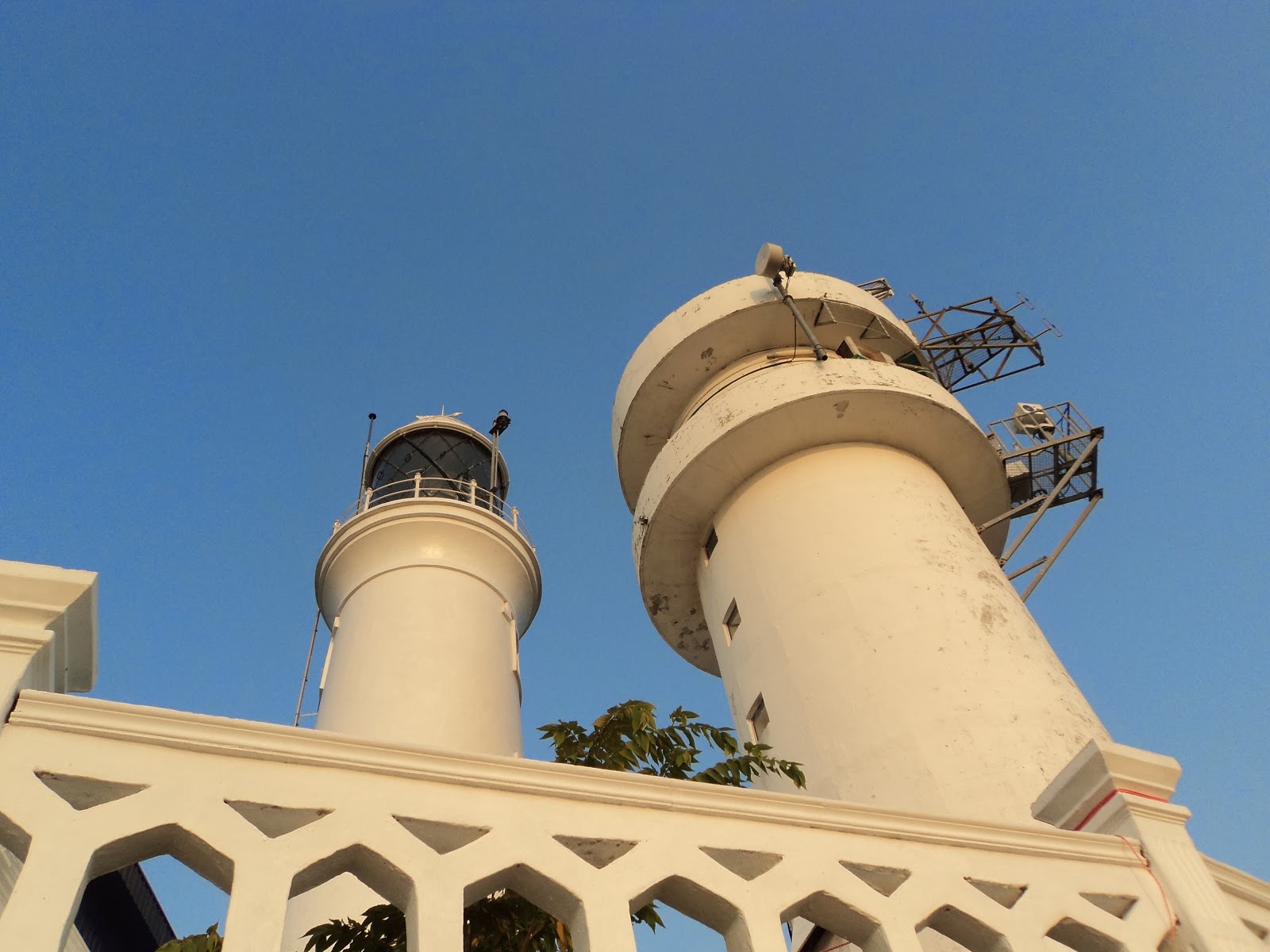 The Cape Rachado lighthouse viewed from a different angle. 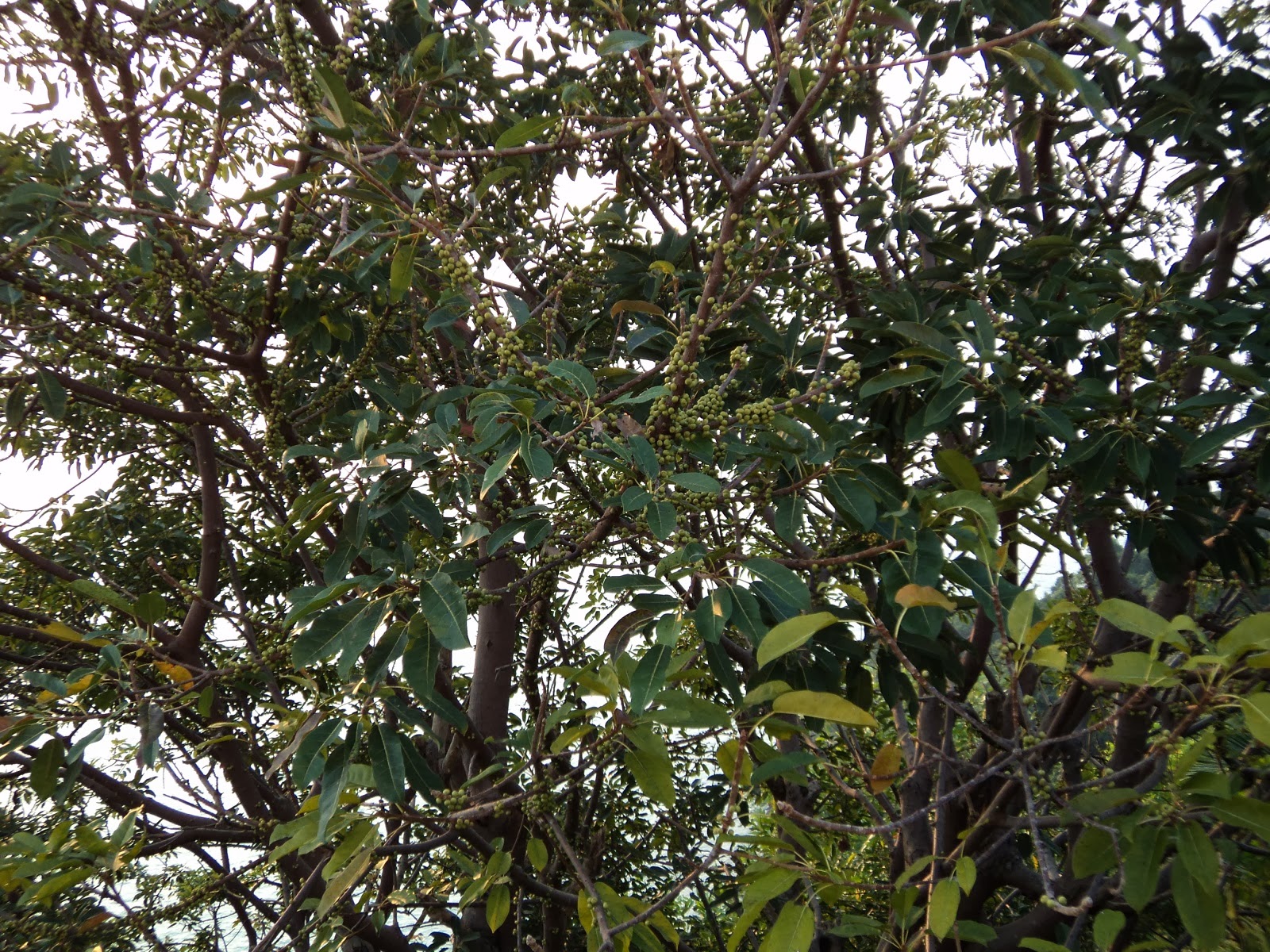 A tree that caught my attention. My guess is that it is a Ficus racemosa. Would anyone be able to help me ID it? 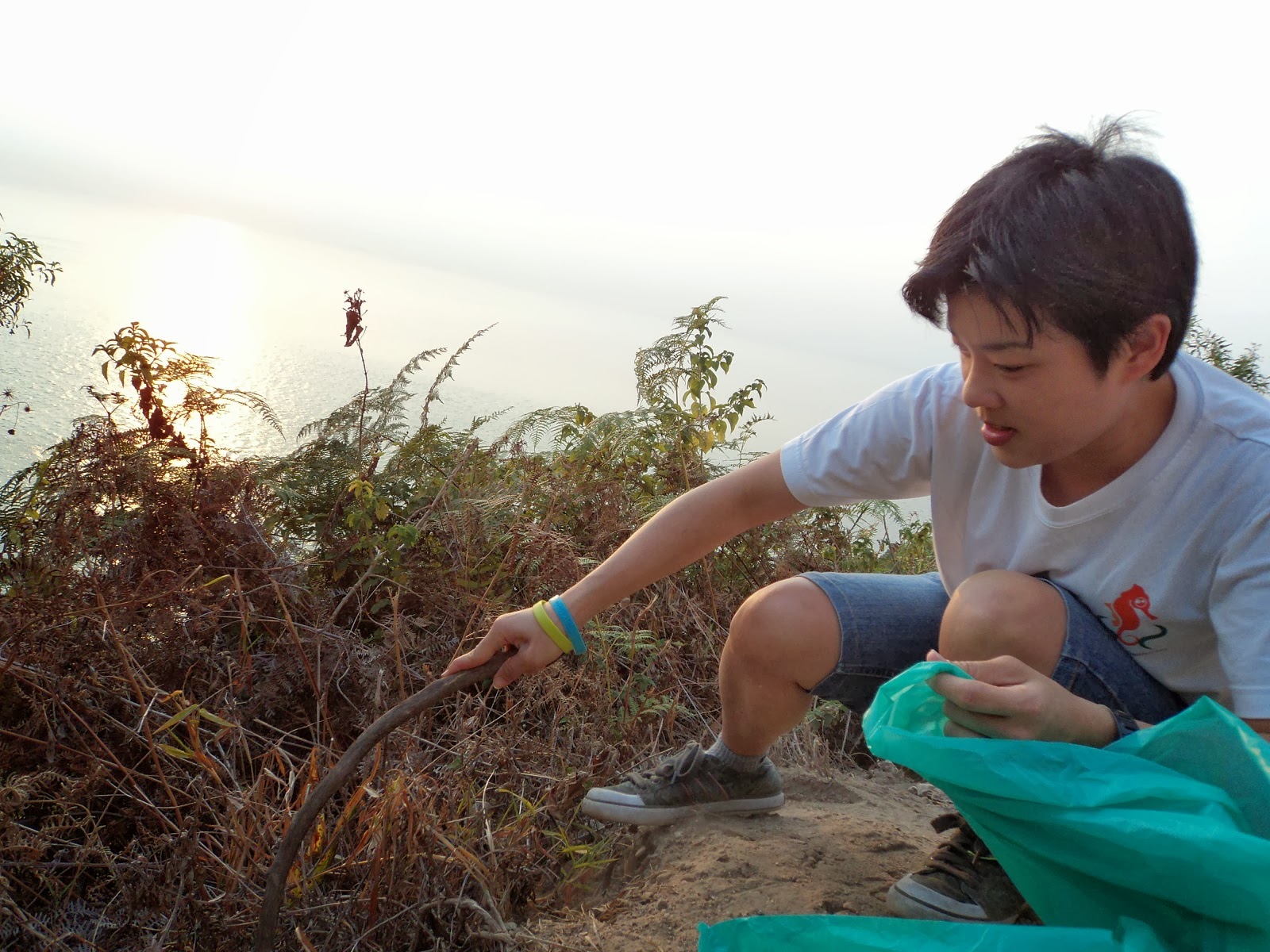 Picking up litter along the jungle trail and around the lighthouse, as usual. Eunice was surprised to see the bin bag. She didn't realise that I bring bin bags with me wherever I go. Cleaning up nature spots has become a bit of an obsession with me. 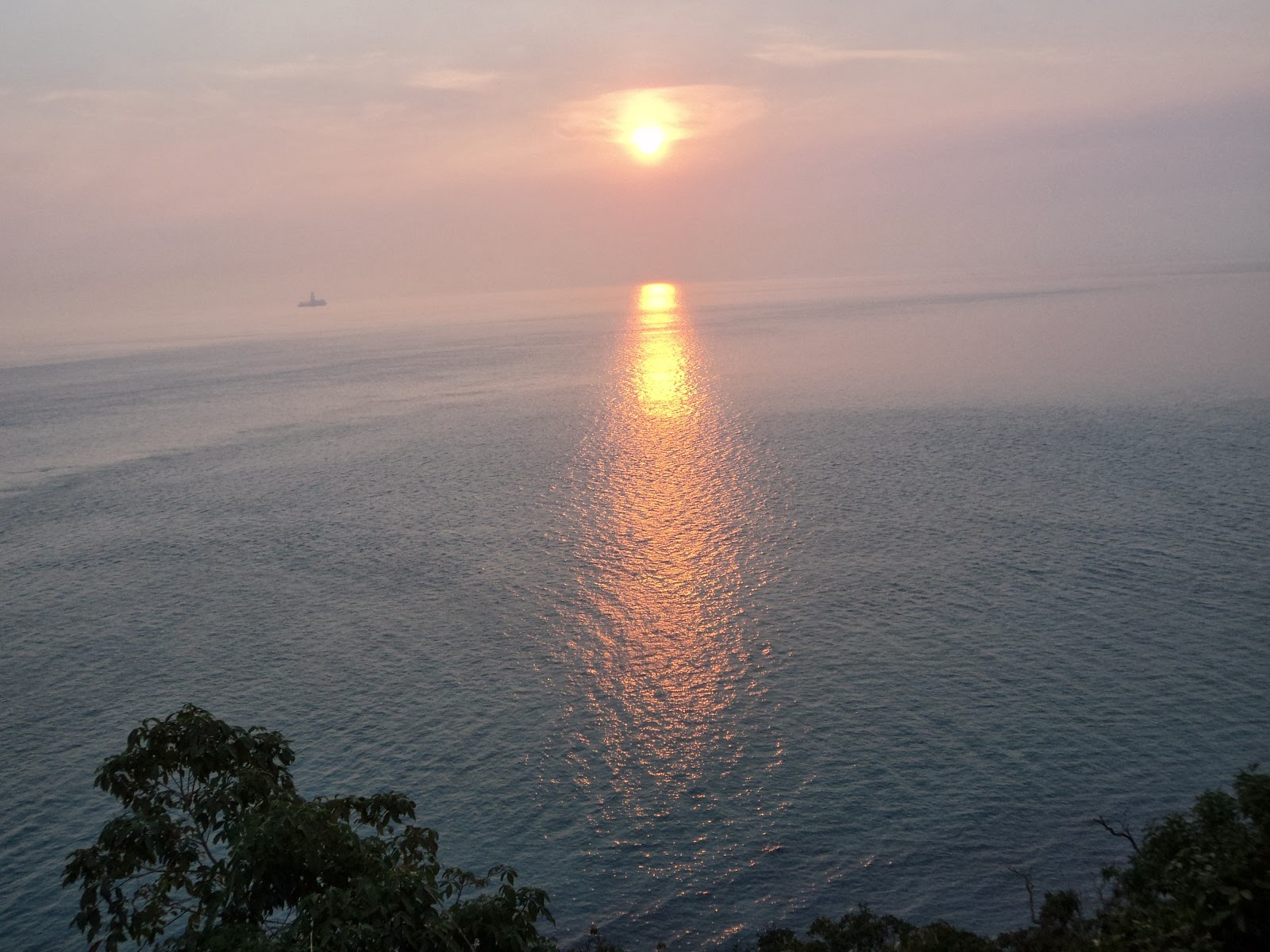 Sunset over the Tanjung Tuan Forest Reserve and Straits of Melaka. 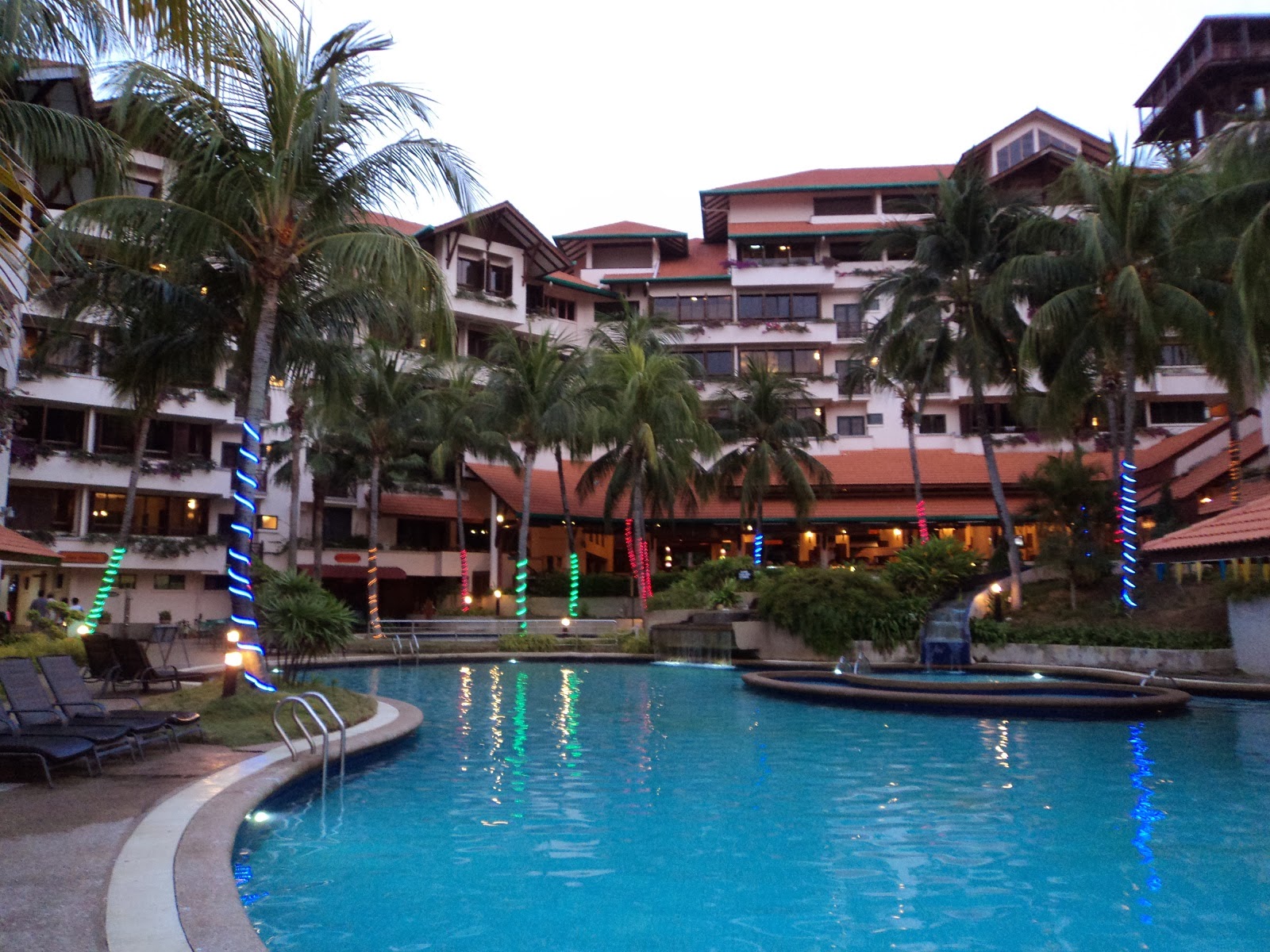 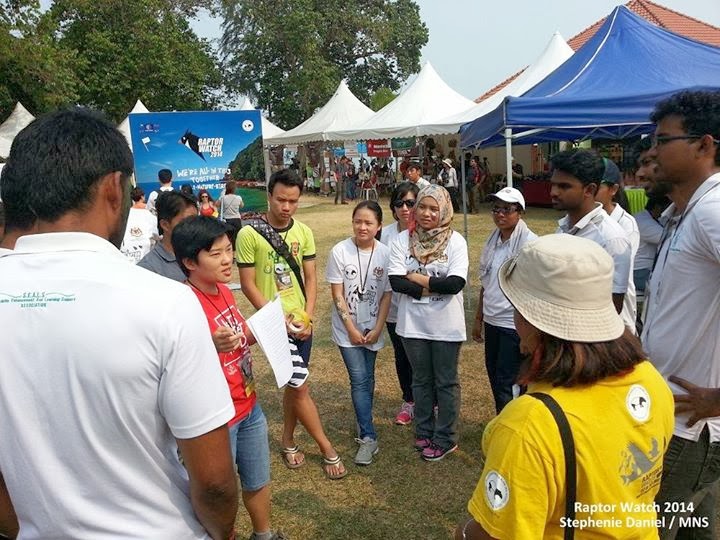 Me, briefing the race marshalls and 'predators' on their roles and responsibilities before the Predator Run.  (Photo credits: Stephenie Cecilia of MNS) 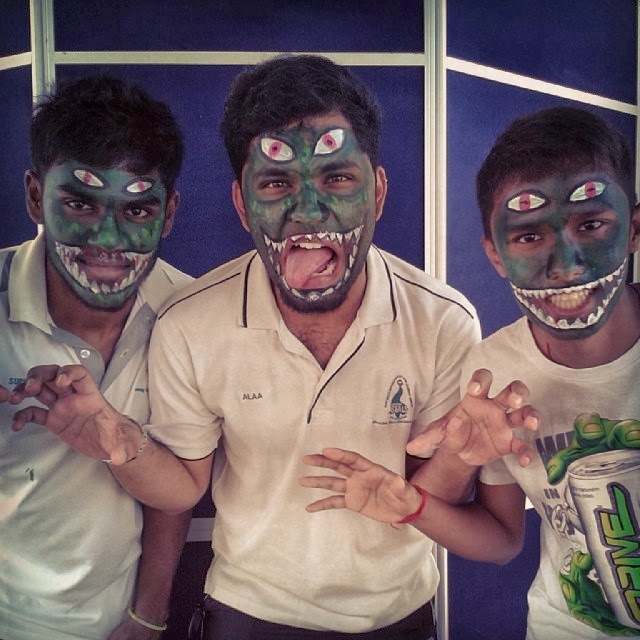 My 'predators' were supposed to have eagle costumes but that didn't happen due to budget and time constraints so we made do with painted faces instead. I don't know how they ended up gators instead of raptors, though. But it's alright, the boys did a great job of catching the runners and ripping their race bracelets off. Even last year's race winner was not spared. All the runners were able to answer the environment-related questions I printed onto their race bracelets, so maybe I'll need to come up with more challenging questions next year. (Photo credits: Elena, MNS Events Manager) Aravind and Zhang Hui were called up as finalists for one of the Lucky Draw prizes. Neither won, though, but it's alright guys, you'll always be winners in my eyes!