Letter to the Editor: Welfare of Horses Must Come First

Letter to the Editor:
Welfare of Horses Must Come First 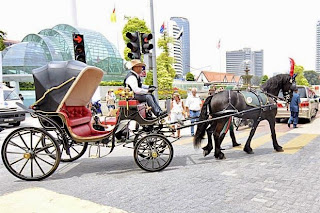 I view with grave concern the news that City Hall has introduced horse carriage rides in Kuala Lumpur (The Star, Feb 15).

It is ironic that such exploitation of horses is seen as an appropriate way to observe the Chinese zodiac year of the horse. Horse carriage rides have never been part of the Malaysian cultural identity and there is no reason to introduce it now to ostensibly boost tourism. It is not a practical or cost-effective way of getting around the city or visiting places of interest. Heavy traffic, frequent construction work, hot weather and poor road conditions all make it impractical and unsafe to have horse carriage rides in the proposed routes and areas.

Although it was claimed by the Kuala Lumpur Mayor that the horses have acclimatised to Malaysian weather and busy traffic, there will always be a risk of heat exhaustion, accidents and injuries to the horses. Horses suffering from dehydration or heat stress can die in a matter of hours before the arrival of veterinary help. Also, despite claims that these horses are accustomed to busy traffic, it stands to logic that horses, being animals of prey, can never be fully comfortable dealing with traffic. As stated by Dr. Holly Cheever, Vice President of the New York State Humane Association, it is normal for horses to "react to threatening situations with panic and flight". Due to the large numbers of accidents involving horses that were "spooked" by traffic while pulling carriages, New York City is now considering a ban on horse carriages for safety and compassionate reasons.

Further, it is unnatural, unhealthy and cruel for horses to continuously breathe smoke and exhaust fumes from urban traffic. In a study by veterinarian Jeffie Roszel, "tracheal washes and samples from respiratory secretions from these horses showed enormous lung damage, the same kind of damage you would expect from a heavy smoker." It is misleading and harmful to suggest that horses can ever be acclimatised to air pollution, vehicle emissions and the stress of dealing with heavy traffic on a daily basis, even if the horses were born and bred in Malaysia and are allowed to rest in between shifts.

Carriage horses working in cities are also susceptible to lameness and hoof deterioration from walking on hard, hot asphalt roads. This problem is compounded by the fact that many horse handlers in Malaysia are not trained professionals and are unable to detect injury or illness and unwilling to stop an exhausted or lame horse from working when a customer has already paid the fee. This is observed in many amusement parks and places of interest in Malaysia where horse and pony rides are offered. At one such tourist spot, when I had asked the handler if he would be able to rest a horse that was visibly exhausted and sweating, he replied that his employer expected him to man the booth and that horse rides must be available at the stated hours. Clearly the welfare of the horses will not be prioritised by such profit-making enterprises.

There is also concern as to what will happen to these horses when they are no longer able to pull heavy carriages. Solutions such as selling them off to riding schools, petting zoos and paddocks often incur considerable expense on the part of the buyer and caregiver. Many buyers are not keen to purchase an aged horse past its working age, as they are seen as liabilities. As such, most horses are euthanised when they are no longer able to run and carry heavy loads.

Many cities around the world including London, Paris, Toronto and Las Vegas have already implemented horse carriage bans following pressure from concerned citizens and safety incidents. Out of concern for the welfare of the horses already purchased by City Hall, I would like to propose that these horses be restricted to running in the Lake Gardens and other such public parks where they will at least be safe from heavy traffic and exhaust fumes.

Instead of offering horse carriage rides, City Hall should consider safer, greener and more humane alternatives such as electric trams and trishaws to transport tourists to places of interest.