Oh What A Night ~ "Jersey Boys" at Istana Budaya 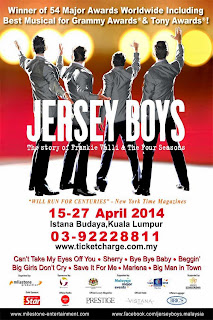 I have been a Frankie Valli and the Four Seasons fan for years, so it was only natural that I ended up a Jersey Boys fan. For years, I have been watching the YouTube videos of the London and Broadway cast, trying to make up my mind as to who my favourite Frankie is, singing along to the songs, wondering if I will ever have the opportunity to watch the Jersey Boys live on stage.

That opportunity came on April 18 when Aravind bought us tickets to watch the South African production of Jersey Boys live at Istana Budaya. We took the day off on Friday, as we had tickets both for Jersey Boys and Aquaria KLCC. I have many misgivings about visiting zoos and aquariums but decided to go anyway because I could then conduct a basic 'zoo check' to see the living conditions of the animals for myself. Although I do not like to see animals in captivity, I know that for many urban dwellers, especially urban children, zoos and aquariums offer the only opportunity to view wildlife close up, and may pave the way to forming genuine interest in animal welfare and conservation issues. 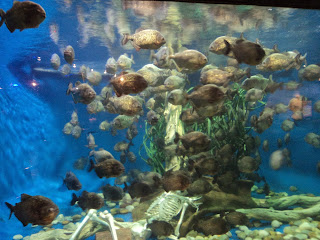 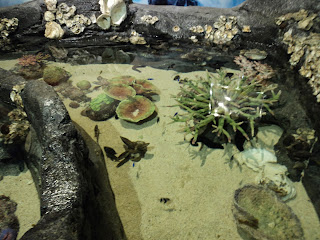 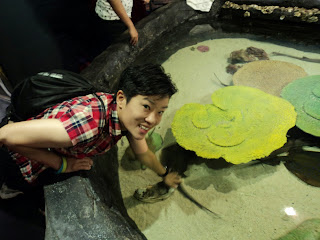 Gently touching the bamboo sharks and horseshoe crabs in the touch pool. I didn't grab or stop them from swimming away. The staff at the Touch Pool were knowledgeable and you could tell they genuinely cared for the safety and welfare of the animals. 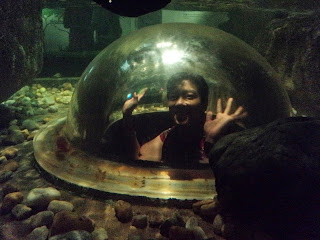 Watching the Asian small-clawed otter at play in a very non-intrusive observation bubble. I look thrilled here because two otters had played on the dome without noticing me underneath, and I could see their bellies and tiny feet. 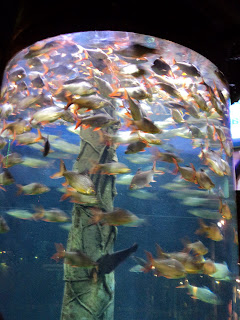 Malaysian Red Mahseer (Tor Tambroides) in the Flooded Forest section. I felt sorry for them that they would have to swim in a churning column of water with so little space for the rest of their lives. 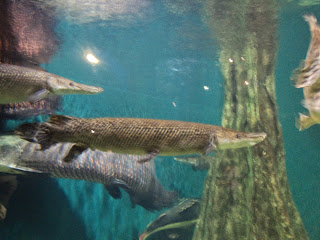 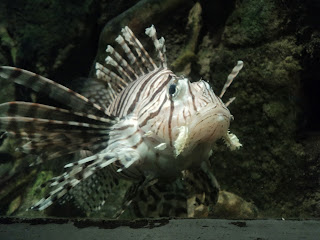 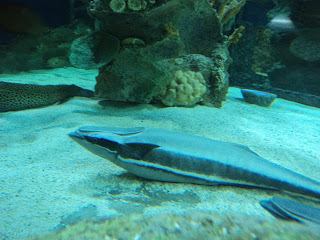 Honeycomb Moray Eel (Gymnothorax favagineus) on the left and Remora Fish (Remora remora) in the centre. The poor Remora fish looks as though there is a shoe print on his head. I learned that it is a suckerfish and the shoeprint-like dorsal fins on the top of its head enable it to attach itself to host fish. 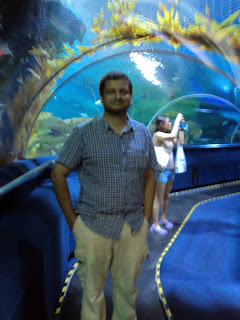 Aravind enjoying the sights in the Oceanarium. The walkalator was rather cool. 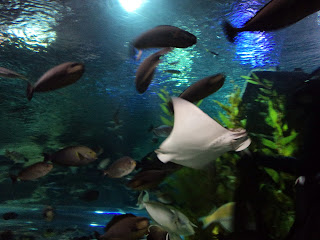 Manta rays and other fish in the spacious Oceanarium. We quite like this exhibit because it is large and naturalistic.

We left Aquaria KLCC and made our way to Istana Budaya in good time for the performance. The excitement was palpable, especially for a Four Seasons fan like me.

The performance was mesmerising and surpassed my expectations. The actor who plays Frankie was excellent and could hit all the high notes as well as Frankie Valli can. He had just the right mix of street kid innocence and world-weary superstar to be a convincing Frankie.


I loved how all the cast managed to get their Jersey accents and different personalities and attitudes just right. It was the Four Seasons to the life! When the stage Frankie found out about the death of his daughter Francine, a hush fell upon the whole theatre, never mind the fact that it's not the real Frankie up on that stage, or that Francine had died decades ago, long before the play was written.

When they performed "Who Loves You", the audience was on its feet, dancing and singing along. It didn't matter to us that it wasn't the real Frankie or the original Four Seasons out there on the stage, they captured the spirit of the music scene in 50s and 60s, working-class New Jersey and glitzy Vegas so well that we felt we were transported through time and space. Such is the magic of live theatre.

After the performance, I didn't want to leave immediately in case we got to meet any of the cast. 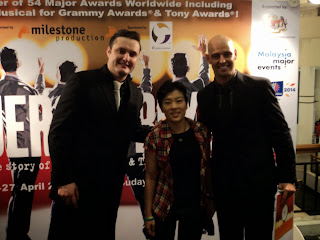 Well, the main cast was nowhere to be seen, and I don't blame them because they must have been exhausted after performing pretty much non-stop for almost 3 hours, but I did get to meet Charles Bouguenon who plays Gyp de Carlo and Jaco van Rensburg, the Frankie understudy, and get them to autograph my programme.

Just too good to be true. Almost.

All through the drive home we were high on the music, thrilled with the performance, just happy and grateful to have been there and to have lived the experience. For one night we were transported away from the skyscrapers and traffic jams of present-day Kuala Lumpur to the bowling alleys and smoky nightclubs of 1950s New Jersey. Oh what a night, indeed.
Posted by ~CovertOperations78~ at 22:32

Now I really regret not visiting the aquarium when I was in KL. It looks like they've done a very thoughtful and knowledgeable job of designing it to minimise stress on the sea creatures while making the best experience for the visitors. Such a relief, especially when contrasted with horrors like the Perlis snake farm. :-(

Thank you for coming over, Amanda! You are right, Aquaria KLCC is pretty well-run and has strong emphasis on education. What worries me is where they source their exhibits from. We need to be sure that they are not purchased from wildlife traders.