Christmas Paw-ty for a good cause

For the past 4-5 years, SPCA Selangor has been conducting Santa Paws Christmas fundraisers in early December to bring friendly dogs and dog guardians together and to raise funds for Mission Help projects to subsidise neutering, vaccination and deworming costs for animal rescuers and stray animal feeders. For approximately 4 years, the beneficiaries have been the rescuers who operate around Jaya One shopping centre.

The stray dog and cat population in the area had been rather high because of the available food sources (uncovered rubbish bins, food courts) and the fact that dogs brought in to guard construction sites were often abandoned once construction was complete and the buildings started getting occupied.


This year, the funds raised from Santa Paws would be used to neuter the dogs in the Kwong Tong Cemetery, not far from my former workplace. A number of my friends live nearby and have been feeding the dogs in an effort to make them friendly and trusting enough to be approached and hence, trapped for neutering. 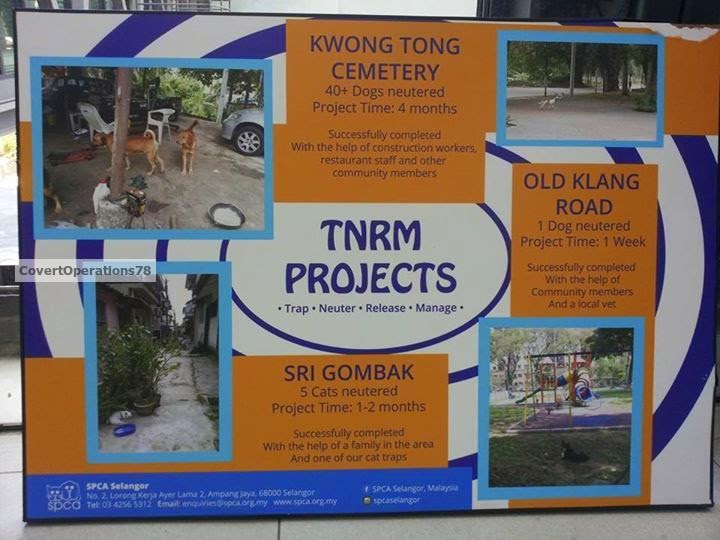 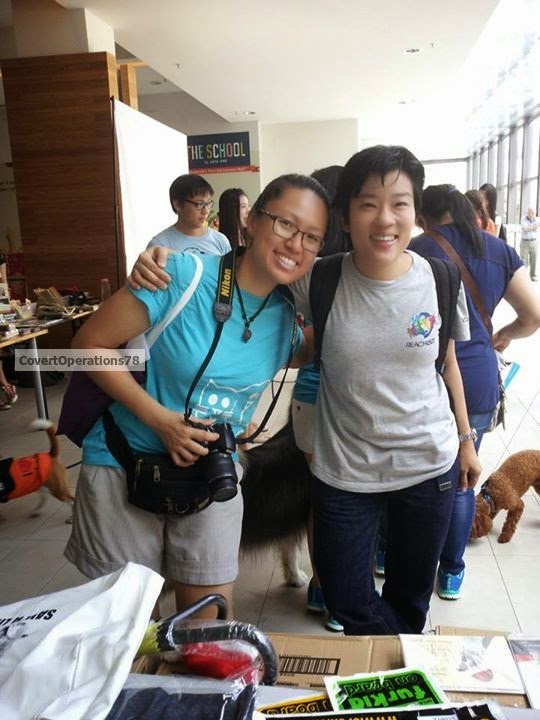 I was happy to see my friend Pyo again, although the SPCA officers and staff were understandably busy that morning. 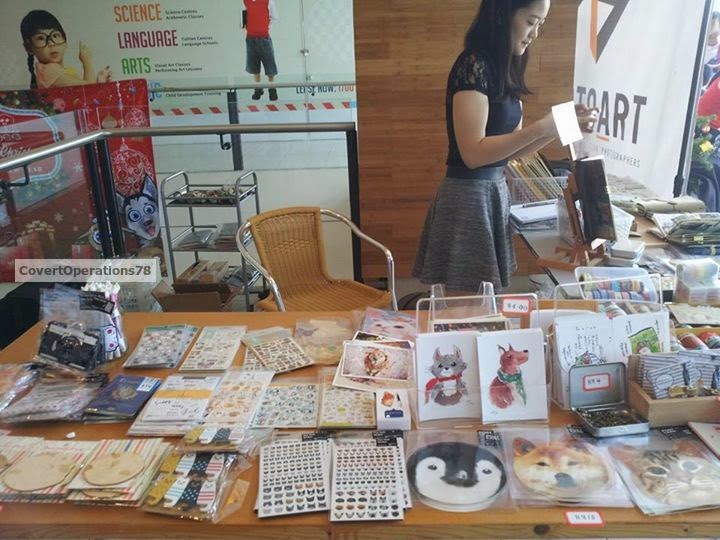 It was a Christmas Fair for both companion animals and animal-loving individuals. This merchandise booth had the cutest animal-themed stationeries and trinkets imaginable. 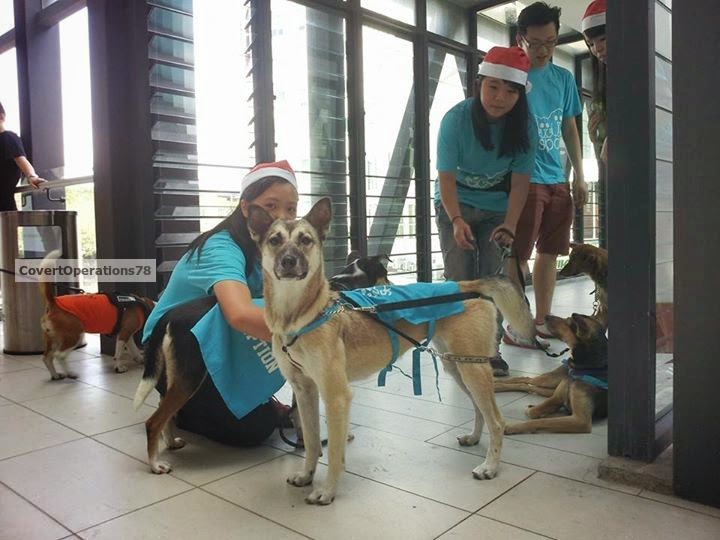 I had spent the day before the event bathing and tickwashing dogs and Frontlining cats at the SPCA to get them ready for the event and to increase their chances of adoption. Estrella here had been given a bath in the morning but had managed to dig a hole the size of a diamond mine in the SPCA backyard and gotten herself gloriously filthy again by evening. I had to bathe her and dry her off and keep her confined to an enclosure all night so that she would not get out to dig holes for people to fall into again. She does look a bit indignant here, doesn't she? 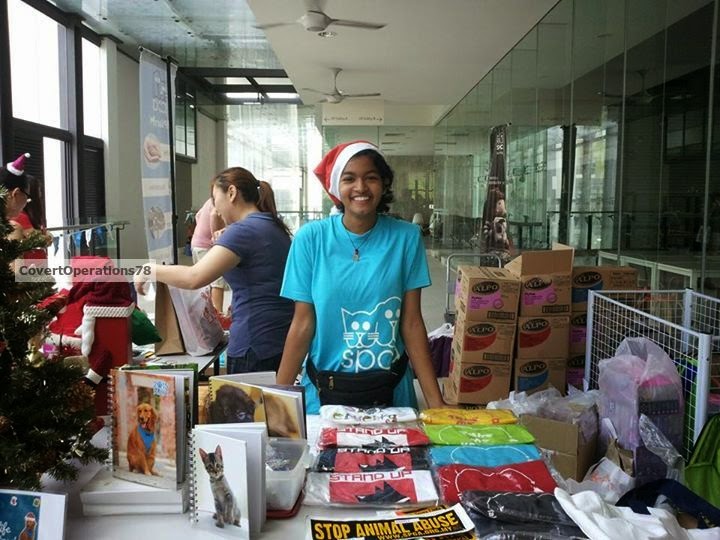 Our teen volunteer Dhanya doing a good job of manning the merchandise booth. 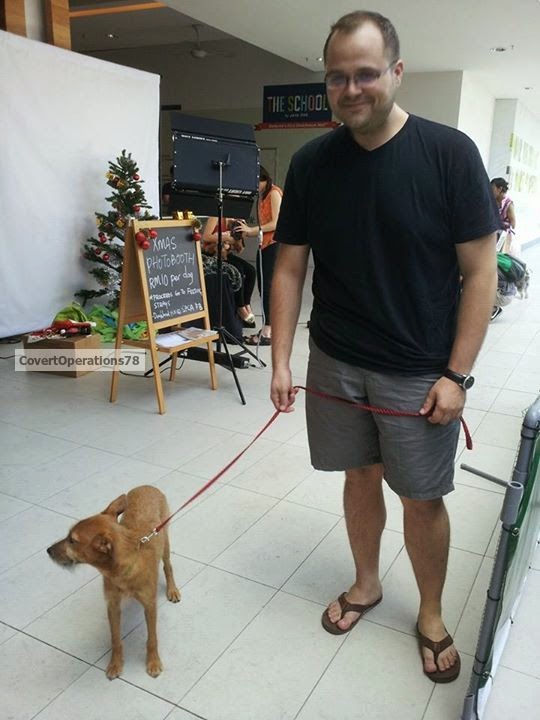 Our friend Gregor with his rescued dog, Mojito, who he hopes to find a good adopter for. I hope Mojito finds a good home soon. 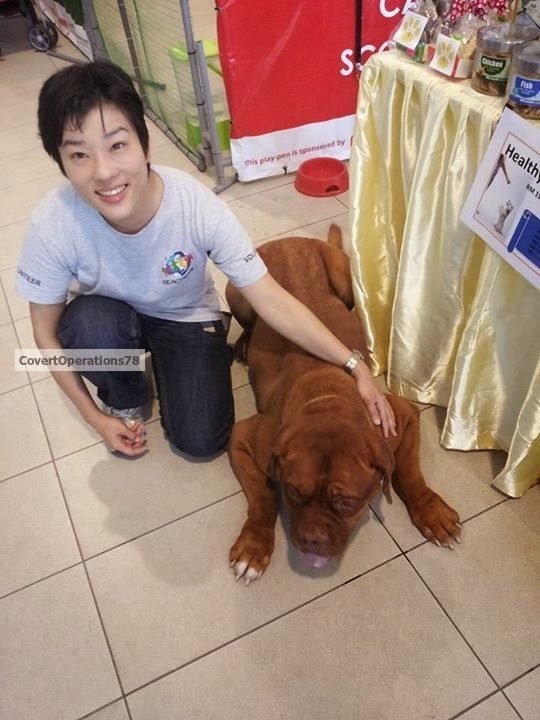 ﻿
I was thrilled to meet Hugo, a Dogue De Bordeaux.  He is a sweet and gentle soul. 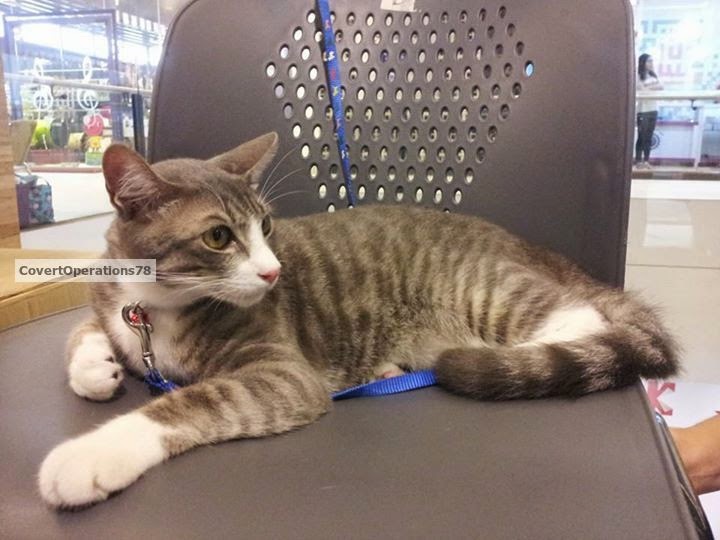 Oyster the Cat must be one of the chillest cats ever. He even has his own Facebook page.  What a handsome little charmer. 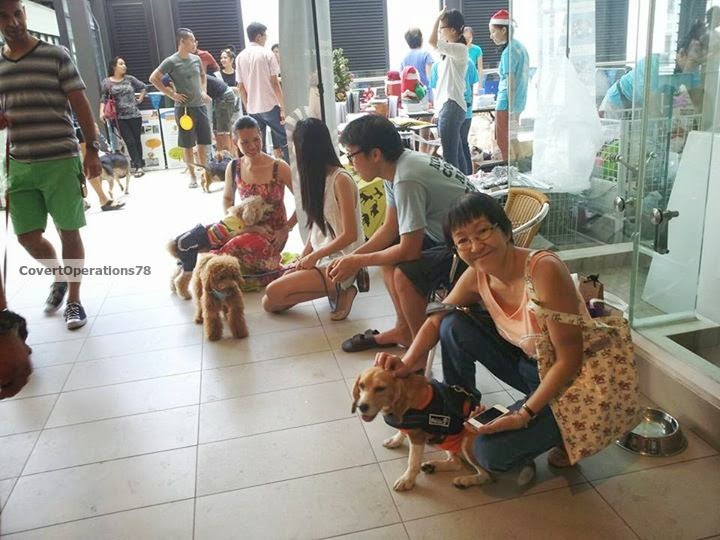 Animal guardians out doing their Christmas shopping with their undeniably well-behaved canine charges. 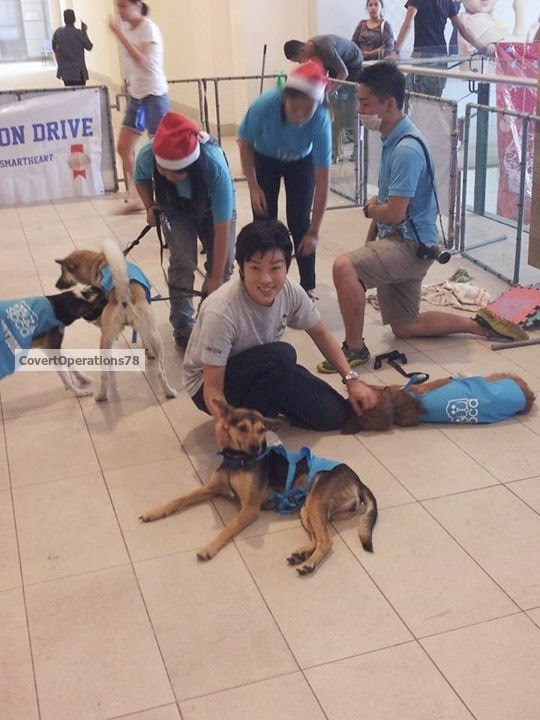 Cuddling with the SPCA dogs in the Off-Leash Play Pen area.

The objective of this event is not only to raise funds but to encourage people to bring their sociable and well-adjusted canine charges out to animal-friendly public spaces, raise awareness on animal rights and welfare issues, provide a place for animal rescuers and adopters to meet, create economic opportunities for rescue groups and local companion animal-related businesses and encourage and support rescuers in their efforts to trap, neuter, release and manage stray populations.

If you are a rescuer or need help in getting community animals neutered, please observe the following procedure in applying for subsidised neutering and other assistance under SPCA's Mission Help initiative:
1. Submit a request via their website. Provide helpful and accurate information as to the location and number of animals.
2. Play your part. If the animals are aggressive, fearful or skittish, help the SPCA by feeding the animals for at least a few weeks until they are trusting enough to be approached. If you are not able to approach them, there is a high likelihood that the SPCA rescuers and inspectors will not be able to, either! We can't block off entire roads and buildings and we don't have magic skills. Help us corral or leash the dogs/cats in an enclosed area, e.g. a yard or warehouse, until the SPCA van arrives. Too often, people submit requests to Mission Help and expect us to do all the work ourselves. When the Inspectorate van arrives, the animals run helter-skelter and our staff end up wasting an entire day chasing after aggressive dogs and fearful cats.
3. Sometimes, difficult decisions will have to be made. Some animals are ill, injured or diseased and are therefore not medically fit for neutering. The SPCA does not have x-ray equipment or other resources for diagnosing serious medical conditions. Your options include:
- Leaving the injured/ill dog/cat behind in the hope that they will recover on their own, and proceed with the neutering of the healthy animals instead.
- Making an arrangement to take the injured/ill dog/cat to a vet of your own choice and paying for the treatment yourself. The SPCA can help you promote your appeal for assistance or adopters on social media but genuinely does not have the resources to pay the bills for you.
- Arranging to foster the dog/cat in your home until he/she recovers and is strong enough for neutering and release/rehoming.
Helping animals is a difficult and thankless job. Please be considerate to animal rescuers and welfare organisations and help them in order that they can help you and animals better.