Sometimes protest doesn't come in the forms you expect it to.
Sometimes protest comes in the most subtle, gentle and delightful of forms.
This event came at the right time for our hurting country. It has been an emotionally-charged week, what with the UMNO General Assembly delegates spewing venom filled with racial and religious hatred and the one-sided use of the Sedition Act to silence and oppress students, activists and opposition leaders. 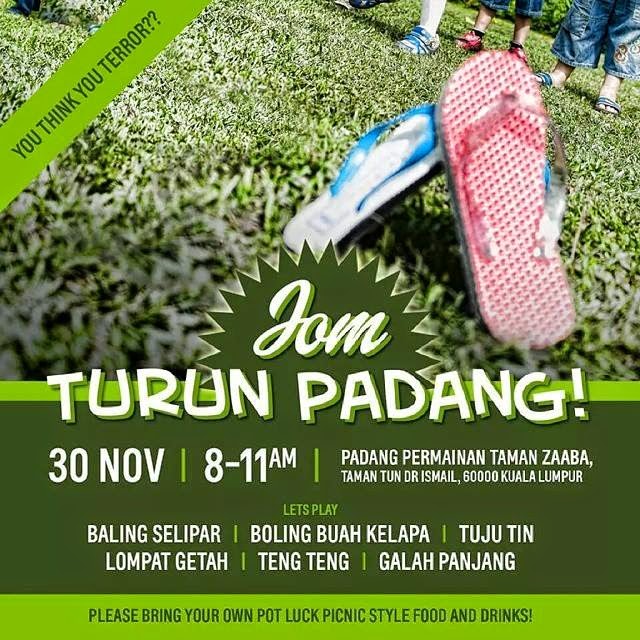 I had already made plans for the weekend of November 29 - 30 when I saw this poster being shared on Facebook. I was both intrigued and thrilled. The organisers of this informal community event just wanted to bring members of the public together to play old-school playground games from our childhood, in an effort to take a walk down memory lane, encourage people to get to know their neighbours and make new friends, introduce children to traditional schoolyard games that do not involve toys or electronic devices, and strengthen and heal the community.
I doubt they had politics or protest in mind when they organised it, but for those of us who had attended it, the sense of solidarity and camaraderie was palpable. This was our way of thumbing our nose at the racist rhetorics of the ruling coalition and the atmosphere of fear and suspicion they try to create.
And so in spite of a weekend schedule packed with volunteer commitments, chores and vet appointments, I managed to carve out time to attend this event at the Taman Zaába public park. Aravind accompanied me there, although he is too much of an introvert to want to join in the games, and we brought chips and chocolates to share with the families picnicking and playing games at the park. 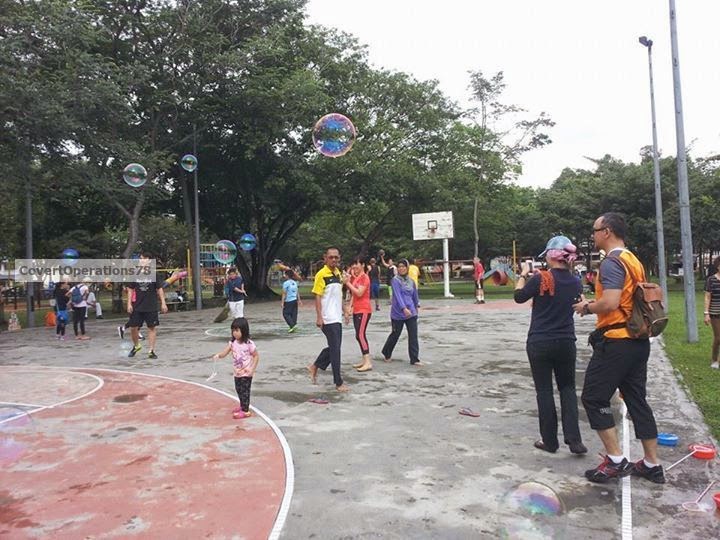 Boisterous games of rope-jumping, hopscotch, seven stones and rounders were in progress when we got there, but I was fascinated by the giant bubbles being blown by a gaggle of children and adults in one part of the park. 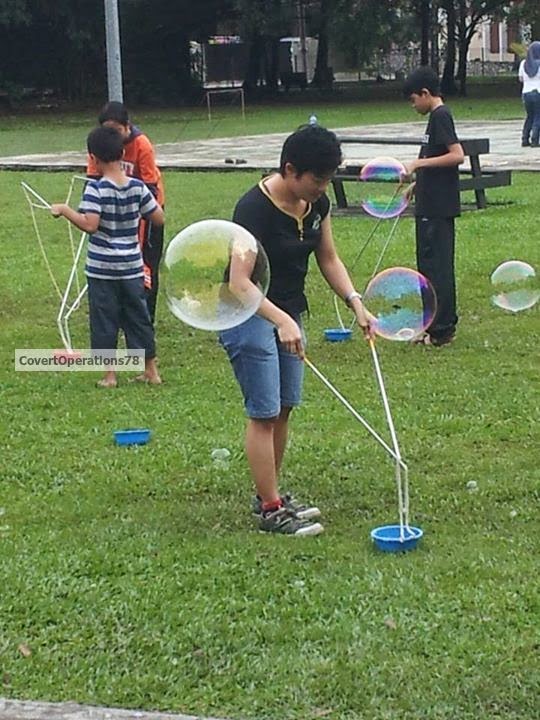 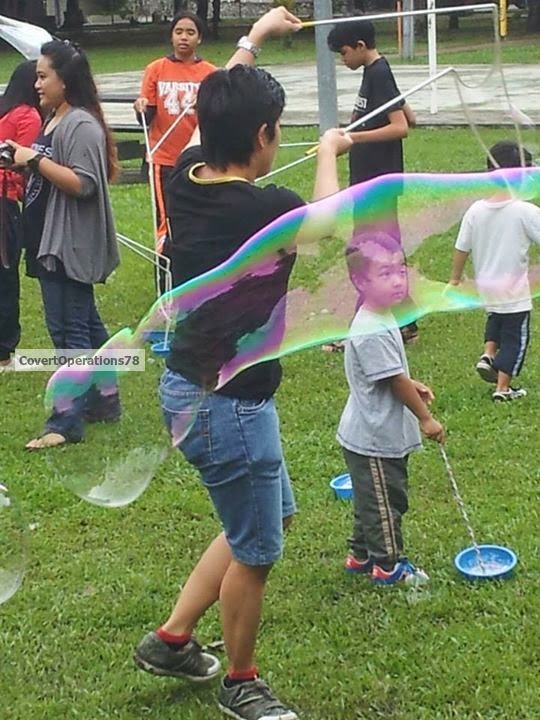 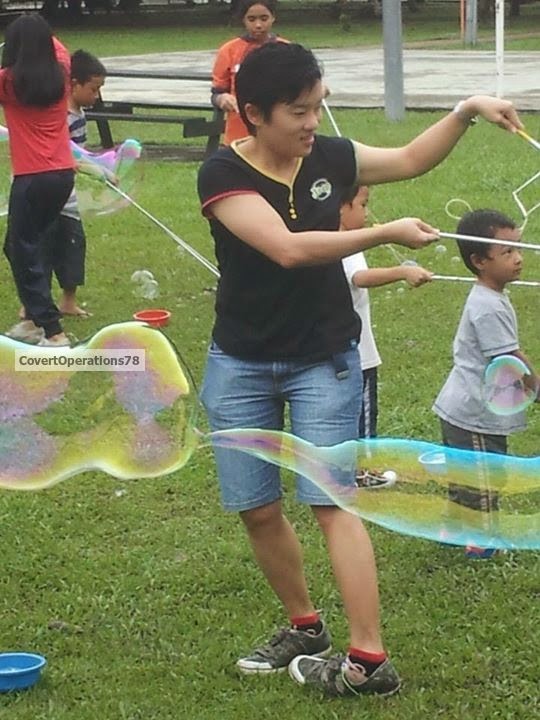 The park was filled with exclamations of wonder and triumph as we released huge, iridiscent bubbles into the air. It took only one or two tries to get the hang of making giant bubbles using wands and string loops. 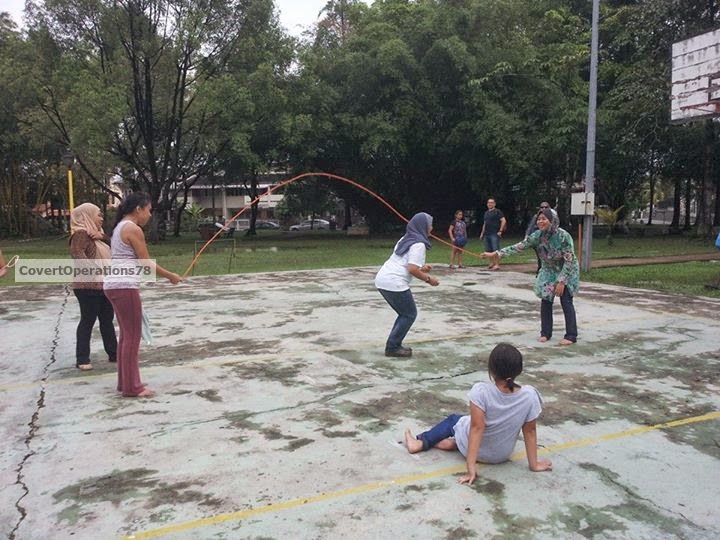 Then it was time to move on to something else. I observed these ladies jumping rope for a while before I asked if I could join in. 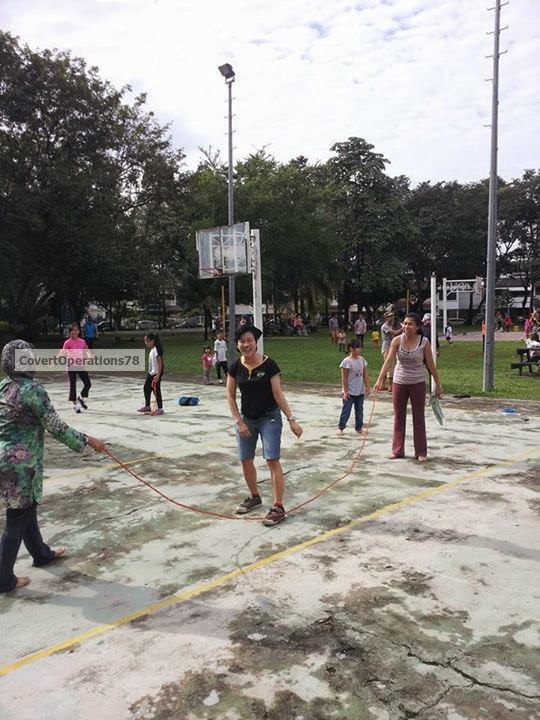 I was always horrible at girls' games such as rope-jumping and hopscotch, even as a child. This time, however, it didn't matter. The school playground is a place fraught with danger -- petty quarrels, jealousy, popularity contests and the humiliation of being picked last for games. Once you're an adult, however, it doesn't matter. Especially not on a beautiful Sunday morning like this. 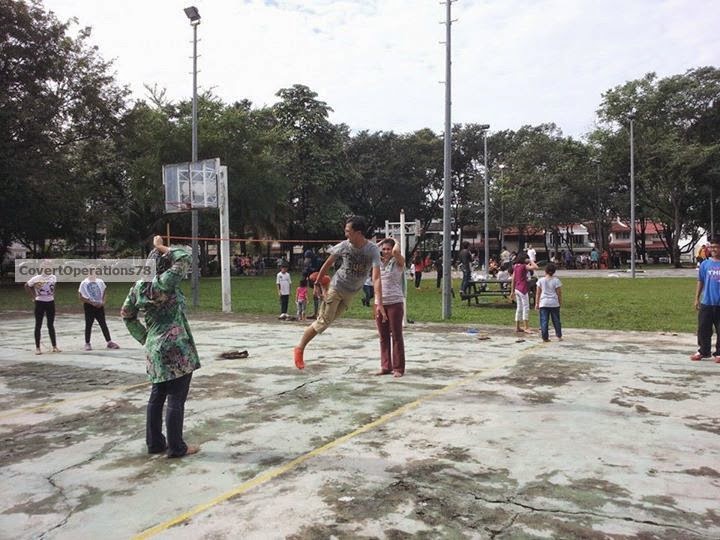 Syed Azmi (yes, he of the I Want To Touch A Dog fame) had a go at the rope and almost succeeded in clearing the jump. Way to go, my friend!
I suggested a few other schoolyard games that do not require equipment, including the traditional village game of "Laga Lutut", or knee-jousting. Azmi was curious, and we tried it out. 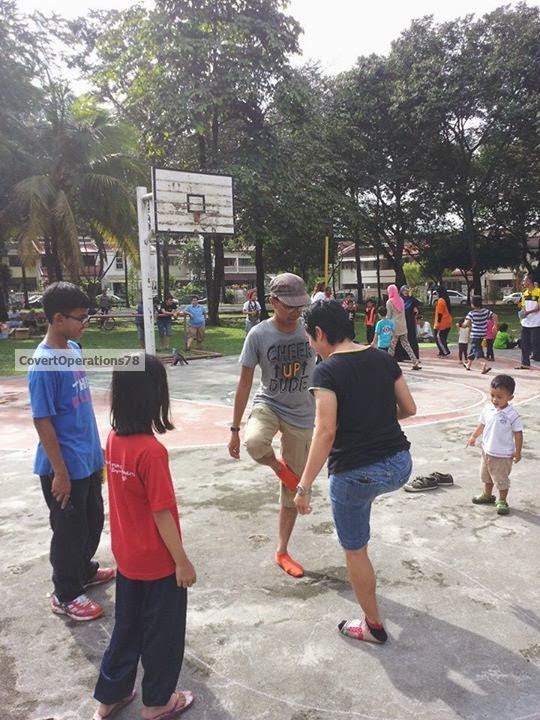 Basically, participants stand in a chalk circle with one knee raised. At the word 'go', you slam your knee against your opponent's knee without falling over. The first one to step out of the circle, cease standing on one foot, or lose one's balance loses the match. Such a simple but fun game. 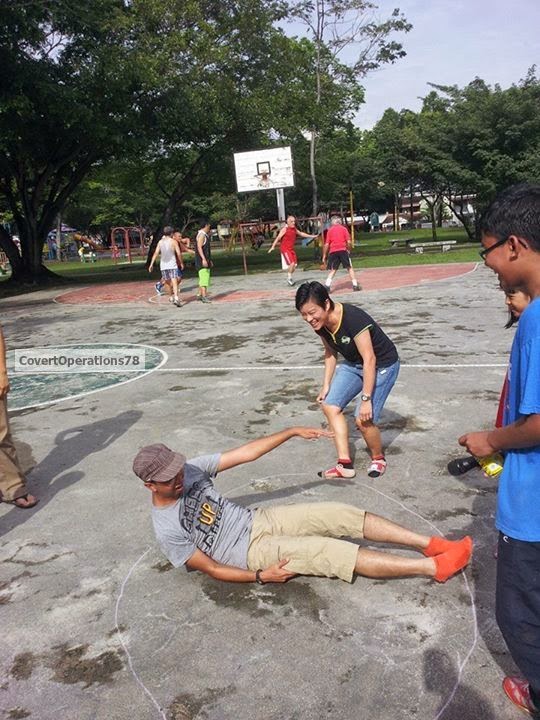 Guess I don't know my own strength because I knocked Azmi out both rounds. 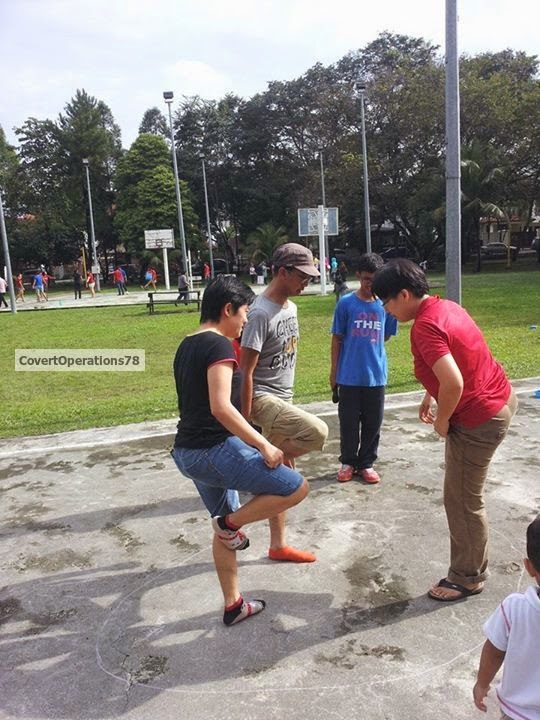 My new friend Natasha wants to play, too. 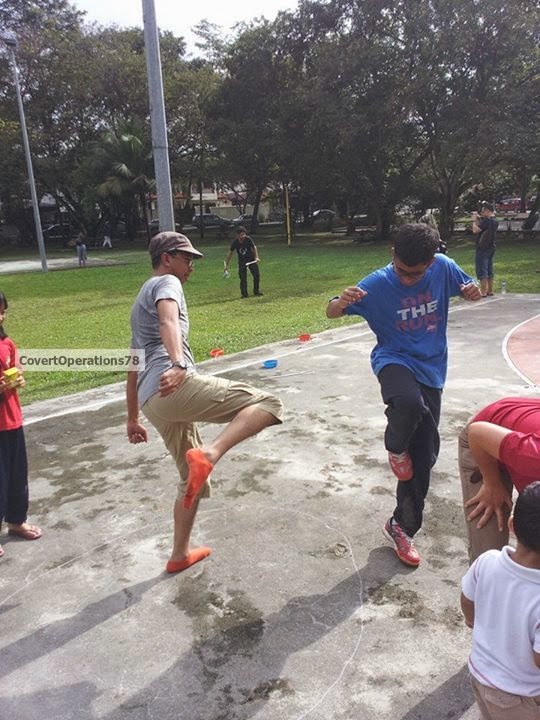 A youngster steps up to challenge Azmi. The heat is on! 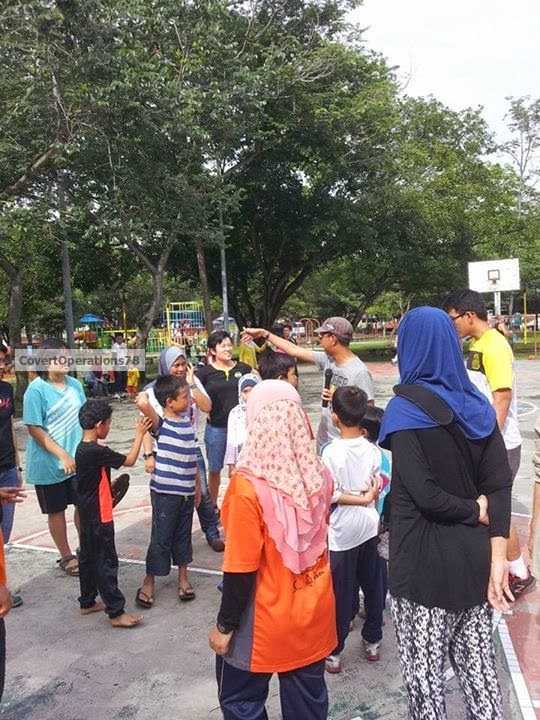 With the crowd building up, it was time for a big, boisterous round of the multigenerational game, "Tuju Kasut", also known as "Baling Selipar". Azmi explains the rules to us and we split into two teams. 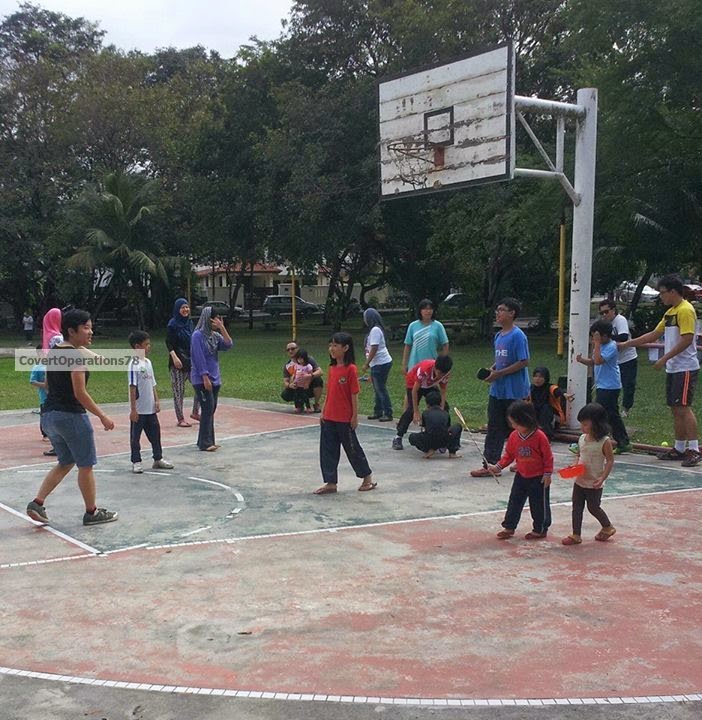 The rules are that one team will build a pyramid/wigwam of 3 flip-flops or shoes, and try to protect it from being destroyed. The other team tries to knock the wigwam down using another flip-flop. Once the wigwam is down, the attacking team takes out the defending team's members one-by-one by hitting them with the flip-flop used in the initial attack, while the defending team tries to rebuild the wigwam without getting hit. It was like a combination of a beach rave, marathon, war zone and fish market out there. Even passersby stopped to watch, point and laugh.
By this time, my camera phone was out of battery but it didn't matter, savouring the moment and being present was more important than taking photos for posterity. I looked around and saw sights that filled my heart with contentment -- a grandmother teaching her granddaughter how to play Seven Stones with tiny handsewn beanbags, a teenager giving random children rides on "upih pinang", or palm fronds, as the children screamed with laughter, babies in prams gurgling at the bubbles and joyful noises surrounding them, children climbing up a surprisingly high climbing frame without the supervision of anxious nagging parents, families picnicking and sharing food, several participants cleaning up the park, some others just sitting under the trees, soaking in the Sunday smiles and trying to catch their breath before the next round of rambunctious games.
All I could think of on the way home is: I am glad I came. I am glad I made the time to come. My friends who had seen the post had expressed doubts that they would not know anybody there. Well, I didn't when I arrived either, and now I have made a few new friends (several of whom are into environmental protection and education, volunteering, animal rescue and trapping, neutering and releasing stray animals). I am glad I came and I am grateful for the community-minded individuals who organised this. I really hope they will organise this again.
On this morning of playing old-school games and making new friends, I am reminded again of how healing and energizing play and laughter can be. I look back on this event and how friendly, welcoming and inclusive everyone was, and I know that Malaysia's going to be just fine.
(Postscript: Next time I will bring my 'congkak' set and we will have a marathon congkak-playing session. If anyone can defeat me, I will buy him/her an ice cream cone, so pick your flavour and turn up!)
Posted by ~CovertOperations78~ at 19:50