This is a very difficult post to write, but posting this will give me closure and a sense of finality and completion over Chloe's death. 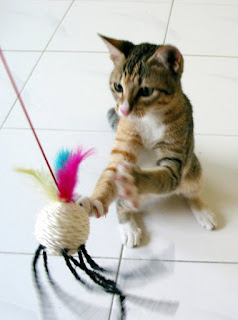 Chloe was adopted by my former housemate Jake from the SPCA shelter on 9th June, 2004. We were renting an apartment then, and Chloe was his birthday gift to himself. She was a 6-month-old kitten, recently spayed and vaccinated, and full of fun and zest. It didn't take long for me to end up in the role of the primary caregiver. I cleaned the litter, fed Chloe, trimmed nails, gave baths and played with her. 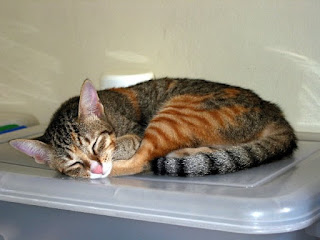 Chloe remained in good health and spirits for most of her life. She was a beautiful, alert and highly intelligent cat. She would watch football with us as a kitten and try to catch the ball on the screen. She could entertain herself for hours, flipping and tossing her toys in the air and catching them with her mouth or paws. 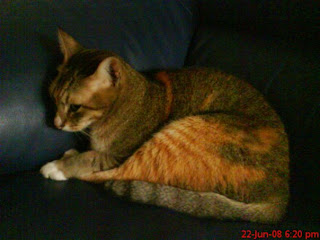 She liked nibbling on lettuce, houseplants and the tips of vegetables. She was formidable at hide-and-seek. 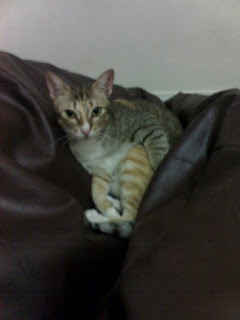 She had agile, nimble paws that could open any drawer or cabinet. She was the only cat I know who will reply with a meow when you call her name and she is not directly in sight. She knew the names of all the other cats, and understood a good deal of human speech. She loved listening to classical music, and being read to. 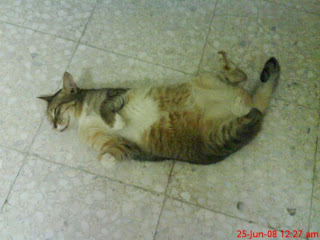 As the First Cat, she enjoyed certain privileges, including the highest perch in the house, and being served food first. She was given the best care and food we could afford. She mostly ignored the younger cats, although she would occasionally deign to share an armchair with one of them. As neutered, vaccinated, indoor cats, I didn't think I had much to worry about when it comes to their health and safety. 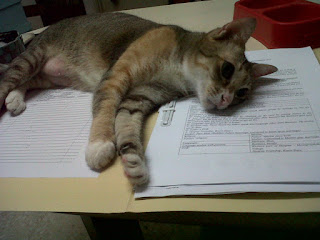 However, in her 9th year, we began to notice hair loss and mouth ulcers that I was unwilling to attribute to stress. I took her to the vet on several occasions and finally, the vet decided it would be prudent to conduct an ELISA test. In April 2013, Chloe was diagnosed as being FIV positive. My world came crumbling down then. How? Why? They are indoor cats, and all my rescues are screened before being fostered indoors. How could it have happened? They are neutered, vaccinated and kept in clean and safe conditions. Plus Chloe is neither a fighter nor a biter. How did she get infected? Was it something that had been dormant in her for a long time, and she is only displaying symptoms now that she is older and her immune system less resilient?

The important thing for me was to keep her healthy, comfortable and safe, and keep the other cats uninfected. I had all of them tested to determine their health status, and thankfully all tested negative on the ELISA test. Chloe kept to herself on her high bookcase perch a lot of the time, and didn't roughhouse with the others, so I knew we could maintain the status quo without endangering the other cats. My former housemate had by then relinquished all responsibility over Chloe, and so I took over her care entirely, taking her to the vet for monthly checkups and putting her on RetroMAD1, a trial drug which had shown promise in managing FIV and FELV.

And so for two years we travelled to the vet every 3-4 weeks, undergoing medical checkups, obtaining the trial drugs, and purchasing other supplements such as Vetri DMG for Chloe's health. It wasn't an imposition for me. I quite enjoyed the time we spent together, although I would of course much rather have a healthy, happy cat than one who is terminally ill. Every few weeks we would visit the vet, get Chloe checked, obtain her medicines, buy her food that she liked and go for lunch at the food court up the street from the vet.

She had good days, and not-so-good days. Her good days were easy on everyone. On her not-so-good days, I would hand-feed Chloe her favourite wet food, Fancy Feast Royale. I would apply coconut oil to her mouth ulcers and gently clean away her drool with warm water. I would play her soothing piano music and stroke her gently and let her know how much I love her and want her to be well.

We moved to the Wee Green Flat in June, and my former housemate did not object when I told him I would be taking Chloe with me. I knew she wouldn't survive a month with him. I'm not even sure he knows what medicine to give her and how much. Chloe loved our new home and like all the other cats, seemed very relaxed, comfortable and confident there. There were lots of surfaces for her to climb and sit on, and cubbies for her to hide in. There were no piles of dusty clutter for her to trip over or fall off. She loved the airy, bright new apartment. She would spend mornings sitting on the window seat, meowing at birds, and evenings by the kitchen sink, drinking from the trickle of cool water from the water filtration system. She ate well, and often had seconds. She gained weight. Her fur grew lustrous again. She inspected and played with all the new toys and scratching posts. The other cats defered to her seniority and never challenged her for the best seats and perches in the house. She was vocal, and queen of the house once more. 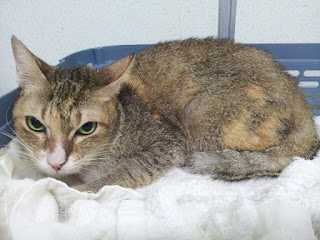 Things took a turn for the worse after I returned from my Turtle Volunteer Programme 2 weeks ago. I was away for only one night. My friend Karen came over to feed the cats and reported that Chloe was bleeding from her mouth ulcers again, although she seemed to be eating normally. I fed her only soft foods and Aravind, bless him, promptly assisted me in getting more antibiotics and RetroMAD1 from the vet. It had worked well in the past, and I hoped that it would work again. Chloe's recovery was dubious and very slow. She continued to eat wet food for two days, and then stopped entirely. She was so weak that she fell when she tried to jump up to the kitchen counter. Alarmed, I put her in the big cage that I keep for fosters, to stop her from hurting herself. She did not protest. She looked tired, and her eyes were dull and listless. Her fur looked matted despite regular brushing and all the supplements I have been feeding her. I still had some Royal Canin convalescence formula left over, and started syringe-feeding her several times a day.

The mouth ulcers stopped flaring up thanks to the antibiotics and anti-retroviral medication, but Chloe's overall condition did not improve. I persevered in feeding her regularly, hoping for a miracle, hoping I would still have a few more years with her. She was only 11-and-a-half, and it wasn't unheard of for FIV-positive cats to live 13 or 14 years.

The morning she died, she had difficulty swallowing the formula, and I knew her muscles were starting to fail her. I held her and rocked her and talked to her, but she displayed such evident discomfort that I placed her gently back in her bed. My brave and beautiful Chloe died at 7.00 a.m. on 28th August 2015.

I miss my brilliant Chloe so very much. She was and will always be the smartest cat I know. I am sad she was terminally ill in her final two years, but I am glad we had good memories together -- memories of birthday parties, Valentine's dinners, Christmas presents, games, treats, cuddles, classical music and quality time together. I will remember her first Christmas with us, during which I bought her a train set, which she loved flipping upside down to watch the wheels buzz angrily like a downed insect. I will remember her first pot of wheatgrass, which created such a frenzy of excitement in her that she pulled every blade of grass out by the roots and munched the whole pot bare within an hour. I will remember the 2005 post-Easter earthquake whose aftershock effect in the old apartment so alarmed me that I rushed to the pub with Chloe, and all the other pub patrons made a fuss of her. I will remember how I tried to get her a Season Pass to the Malaysian Philharmonic Orchestra but was unable to do so only because the ticketing officers had concerns that a cat in the music hall might trigger adverse reactions in those with allergies.

Chloe, you are whole and healthy again now at the Rainbow Bridge. You reign as Queen once more. No more syringes, no more needles, no more ulcers, no more pain. I hope you remember me enough that we can be reunited one day. I will always be your ever-loving mama.

I'm so sorry to hear about the loss of Chloe. Surely she is now frolicking pain free up the rainbow bridge x

Thank you for your kind words for my little Chloe, Li. She was such a good girl. I trust she must be in a good place now. I hope to be reunited with her one day.

such a clever girl she was.

Yes, she was! Still the smartest cat i know. Thank you for loving her too, Aravind.