The last two months have been so very hard, with the loss of two of my beloved feline children. I want to continue doing my Monthly Bucket List for August to remember the good as well as the bad, but all I can think of is how much I miss my Chloe and what a big part of my life and my schedule caring for her had become. Each day is filled both with my hopes for a better life for myself and my remaining cats in the Wee Green Flat, and at the same time the grief and sorrow that comes with the realisation that both Shadow and Chloe got to spend so little time in the Wee Green Flat, and that they are no more with us. I took care of them to the best of my means and ability, and I miss them very much. I have set up a fund to help with the vet bills of other animals in need in loving memory of Shadow and Chloe, but at the moment finances are tight, and I cannot afford to give more than RM100-200 a month to other rescuers in need of funds and assistance.
1. Make a new friend

During the course of doing the 30-Day Minimalism Challenge on Facebook with Nick and his friends, I found that I share many values and interests in common with his friends in Leicester -- Linda, Divita, Anna and Viv. We added each other on Facebook and have had a great time communicating with each other ever since. These women continue to inspire me online each day.

During our Green Living Turtle Volunteer Programme 2015, I got to know several new volunteers, including two from Klebang, Melaka -- Charmaine and Karen. We remained in touch after the Programme and they had sought my assistance in planning future volunteering trips to the Turtle Conservation and Information Centre, as they live minutes away. I gladly assisted and I know the Turtle Centre would be happy to have volunteers as giving and dedicated as them. 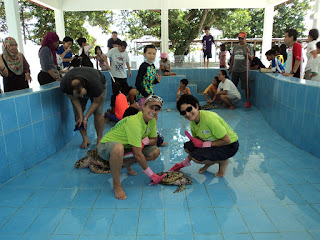 For some time now, I have engaged the children I tutor at Beacon of Hope to write postcards to children in rural hospitals. A few months ago, I learned about Love for the Elderly, a non-profit organisation set up by a teenager in the USA, Jacob Cramer, to send snailmail to senior citizens in nursing homes and assisted living facilities. I found it to be a brilliant idea and shared the cause on the Postcrossing page. I don't know if any other Postcrossers sent them cards, but I started sending 5 cards to Love for the Elderly with every 5 cards that I send for Postcrossing. I hope my cards bring the elderly some cheer. 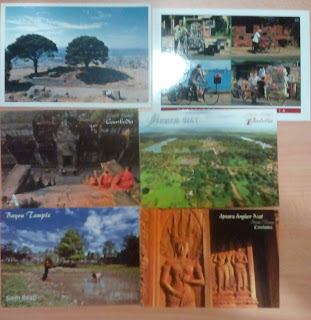 One of the things I started to do regularly to ensure that I am able and ready to do a Random Act of Kindness each time the opportunity arises is keep a pocketful of small change ready to help someone out with. Usually I hand coins to people who do not have the right amount or denomination of coins for parking meters. In August, I gave out coins to those who needed it for parking machines and shopping trolleys. My favourite 'give' of the month was a little girl at the SPCA who had gone there with her family to adopt a puppy. She kept asking her mother for change for the SPCA coin box, but her mother didn't have any coins to spare and was busy filling up the adoption papers. I gave the generous child a handful of coins, which she happily fed into the slot. She seemed overjoyed that she managed to 'feed the doggie and kitty', and I felt glad I got to do a good turn for this kind family who had come to adopt one of our shelter dogs.

Wikipedia made one of its periodic requests for donations to keep the site running, and I didn't hesitate in making a donation by PayPal. Helping one another is what keeps our society strong and smart.

One of my friends, Sherrina, is the founder of an animal rescue organisation called the Independent Pet Rescuers. Sherrina and I had our differences in the past, but this does not stop us from working together for a common cause. When she appealed for funds to pay the vet bills of a rescued kitten called Joy, I pledged RM100 but was not able to bank it in to her until a later date due to many other financial commitments. I didn't forget, however, and Joy remained at the back of my mind like a nagging worry, so I was glad when I finally got paid for some work I did and banked the pledged sum in to Sherrina. The donation is from The Shadow and Chloe Fund for Animals In Need. I hope Joy will grow up strong and healthy and find a good family.

I have been teaching at Beacon since January and have become very invested in my students' well-being. When I found out that some of them would be sitting for their UPSR exams without appropriate pencils and school supplies, I bought boxes of exam-grade 2B pencils and erasers to give out to them. 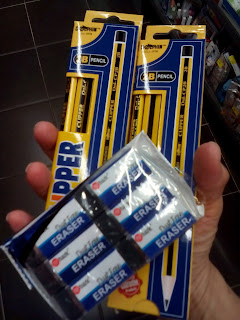 As mentioned previously, Green Living conducted its annual Turtle Volunteer Programme in late August, and two of our volunteers, Charmaine and Karen, were very keen to bring their friends to the centre/hatchery to volunteer as well, but were not familiar with the volunteer application procedure. I was happy to help them out and draft them a set of bilingual letters, and offer to be their translator as they are unable to speak Malay and the turtle centre staff are unable to speak any English. This should be fun! 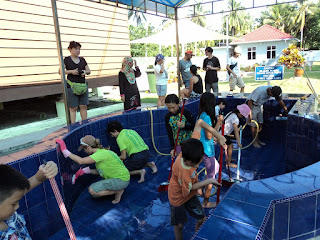 On the occasion of CovertDad's 72nd birthday, I took both parents out to afternoon tea at the Majestic Hotel's Orchid Conservatory. It was a memorable and beautiful tea party, and my parents loved being surrounded by beautiful flowers. I think this outing might warrant its own post, depending on my time and inclination. It's going to be difficult for me to top this next year. 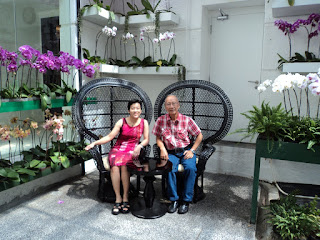 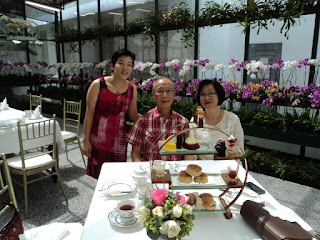 A Kapiti Ice Cream bar opened for business next door to pub and had a 10-day buy-one-scoop-and-get-another-free promotion. I had a grand time trying out new ice cream flavours. I sampled Lemongrass and Ginger on the first day and gave the second cone to Michelle, our barmaid. I had initially planned to visit more often during the 10-day promo, however, after Chloe fell ill, my priority was to stay with her and care for her. 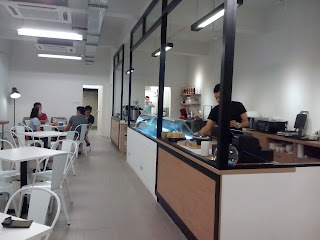 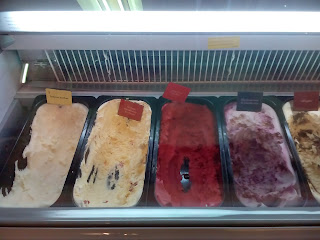 Earlier in the month, I visited RGB and The Bean Hive with Aravind and utilised a KindMeal voucher in order to write a review for KindMeal. 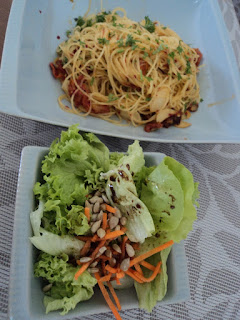 In mid-August, I had to go to Penang for work and ate at Gemini Cafe, Penang International Airport... 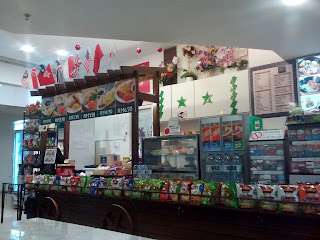 ... As well as Purrfect Cat Cafe in George Town, which I wrote a review for. 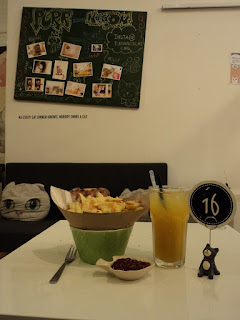 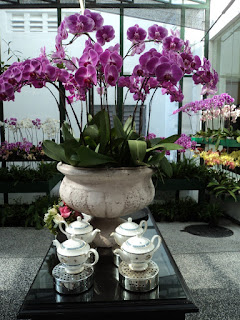 RGB and The Bean Hive at Jalan Damai; 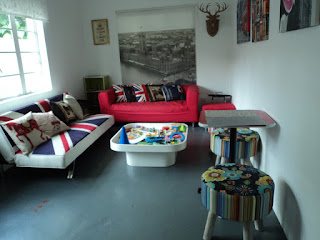 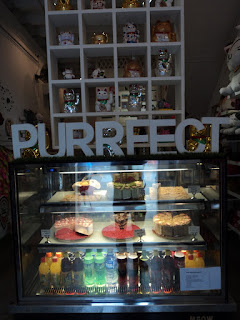 Apart from that, I attended a meeting at Menara KWSP in Penang, and ended up exploring other parts of George Town and Penang Island on foot. I got to spend time at the Lighthouse Thrift Store near Cititel in George Town, 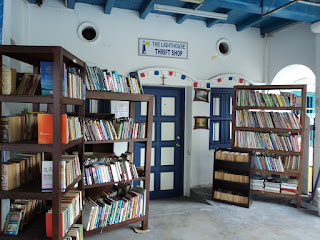 ... and spotted this awesome Mondrian-inspired building on my way to the Bayan Lepas International Airport. 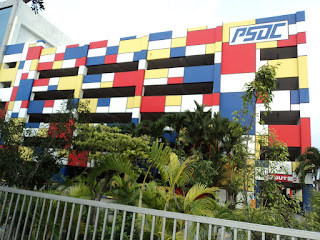 I've been exploring a lot of Kota Damansara on my bike as well, but it took place in the final few days of August after Chloe's passing. I needed to ride my bike to clear my mind and assure myself that I have done the best I could for my beloved Chloe, and nothing more could have prolonged her life without compromising her quality of life.

(i) I learned a new route to work that bypasses the traffic jam; (It took me almost 2 months to discover it, since I don't use Waze or a GPS, so I guess I am not that smart after all)

(ii) I attended talk by Dr Lee Grismer on herpetofauna of Malaysian karst formations on 13th August and learned about critically endangered reptile and amphibian populations; and

(iii) I attended talk on marine plastics and learned about nurdles, and anti-litter organisations such as Litterati and International Pellet Watch. 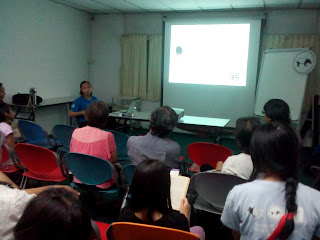 I decluttered my desks both at home and at work and removed a whole stack of diaries, journals, folders and notebooks to be handed out to my students at Beacon of Hope to be used as exercise books. 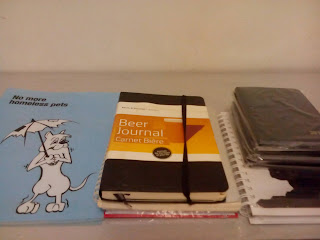 Spring cleaning my desk at parental home resulted in large amounts of paper being decluttered for recycling. Three stacks of papers, magazines, newsletters and folders were removed -- one stack for recycling, one stack of magazines and books for donation, and one stack to keep. 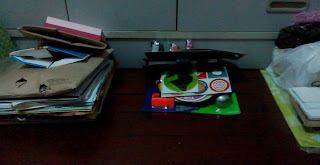 In August, I gave up trying to live with the cracked plaster skim in the kitchen, despite promising myself that I would take a break from DIY and home improvement. I cleaned it up and repainted it in just one night.
Remarkably, in August 2015, I also managed to almost completely give up drinking Red Bull. I drank only one can the entire month. I'm not sure if my health improved after giving up all that sugar and caffeine, but I certainly slept earlier and better.

Upon receiving the report that the Selangor State Government would proceed with the construction of the EKVE highway through the Ampang Forest Reserve and Selangor State Park, I drafted a letter in the capacity of the Coordinator of Green Living, and it was published in The Malaysian Insider and The Star.

It's been a very difficult two months for me. I hope I never have to say goodbye to another cherished feline or canine child ever again. It really is the heart that feels the pain.