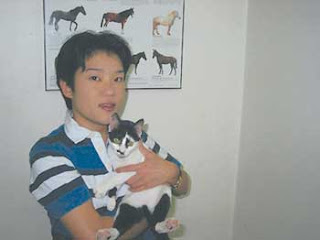 Daisy has achieved sexual maturity and has been announcing it to all the tomcats within a 5-mile radius for the past week. I had to fix an appointment with the SPCA immediately to have her spayed because the Little One is not coping well with the hormonal changes and is driving everyone crazy with her plaintive cries.

And so we were up and on our way to the SPCA by 0845 hours on Saturday morning. Dr. Pushpa had given us the earliest slot, as she would be busy with vaccinations and other neutering appointments for the rest of the day. We had a pleasant drive to the SPCA. Along the Ampang Elevated Highway, I could see the Painted Storks from the National Zoo leaving the Zoo to perch on the lampposts flanking the Highway, where they will remain until sundown, after which they would return to the Zoo. Those are some pretty darn smart birds, if you ask me.

Daisy was duly neutered, and within 20 minutes of our arrival, she was back in the carrier, sound asleep. I put her in my corner of the SPCA office to recover while I got on with my volunteer duties. Shu Ning had brought her foster puppy, Toffee, to the shelter to be put down, as Toffee had been suffering for too long and has no hope of improvement or recovery. Her family had spared no expense taking their fosteree to different vets and purchasing recommended foods, supplements and medicines for Toffee, but the puppy’s immune system was just too weak and she had over the last 2 months been reduced into a trembling, sickly bag of bones.

Toffee was put to sleep, as the vets and staff saw that she had indeed been suffering terribly and was beyond help. I was about to begin walking dogs when I saw Shu Ning exit the surgery with her lifeless dog in her arms. I accompanied her to the Dogs’ Graveyard and held Toffee while she got our staff, Sugen, to help dig a grave. Words were inadequate for such a situation, and nothing I could say could help Shu in her grief, so I scrabbled around for some bricks to mark Toffee’s grave with and plucked some bamboo flowers and the white longifolia flowers that Hindus use for prayers to scatter on the grave. I made a ‘T’ for ‘Toffee’ with the white flowers. It’s terrible having to say goodbye to a puppy. I hope Toffee understands that her family had done their very best to save her and that they love her and will never forget her.

Shu found the strength to go on walking dogs with me, and when we returned to the shelter, I found, to my delight, that my buddy Mun Yee had come to the shelter to visit Daisy and to give me a hand. Together, Mun Yee and I walked and bathed 24 dogs, and treated them for ticks, ear mites, worms, injuries and even one case of tick fever, which was diagnosed only because the dog started having nosebleeds midway through our walk. Thankfully, appropriate treatment was given for each dog, and Mun Yee had quite a day learning the correct ways to administer pills, medicate sores and kill parasites.

Jacinta came in after the SPCA’s outreach session in Bangsar and congratulated me on the article I did on going green for the animals, which was published in the New Straits Times. There is now a request for me to have a regular column on animal care, welfare and rights and I have accepted it, on condition that no deadlines will be set. It is, after all, pro bono, so I should not be burdened with deadlines and other restrictions.

Mun Yee and I finished bathing the rest of the dogs right before it began raining. I then engaged her help in cleaning the shelter. We soaped, disinfected and washed the Maternity Kennels, the driveway / central area, the Puppery, the Cattery and the office / front area. All in all, we put in around 9 hours of work that day. Mun Yee offered to come and help me out as often as she could, until football season starts again and she had to go back into training. I have given up football just so I could devote my weekends to volunteering. The pressure of team sports was simply too high and destroyed whatever joy I derived from playing. Mun Yee played with Daisy, who was still groggy from the anaesthetic, and gave her a goodbye hug before we went back to our respective cars and homes.
It's been another pukka weekend.